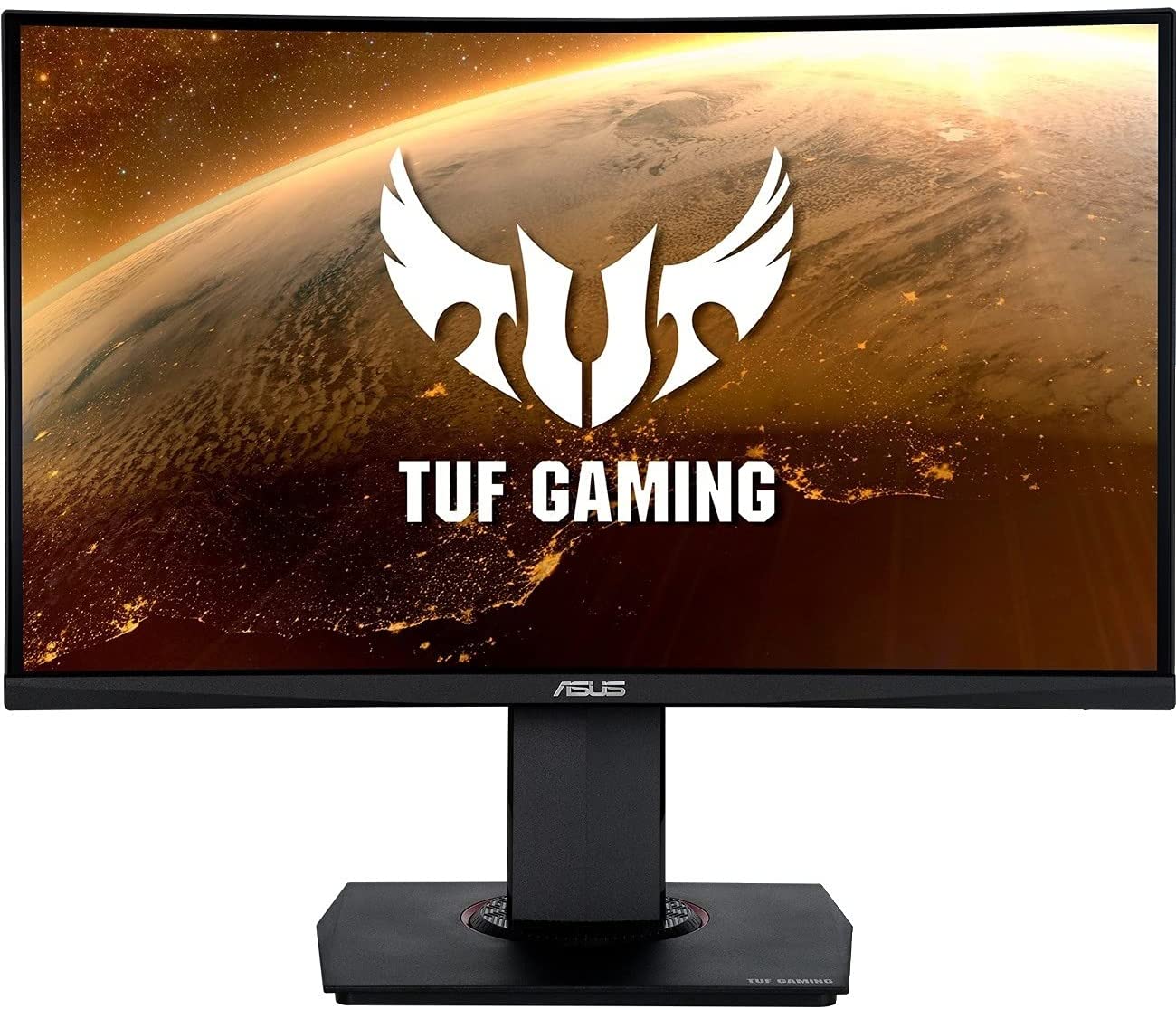 The Asus VG24VQ is one of the cheapest gaming monitors with a 144Hz refresh and the brand’s famed ELMB blur reduction feature. It uses a high-contrast VA panel as opposed to the fast IPS on the higher-priced variants, so the strobing feature will really be handy with it. Let’s see how far your money stretches with the Asus VG24VQ and its gaming or imaging performance. 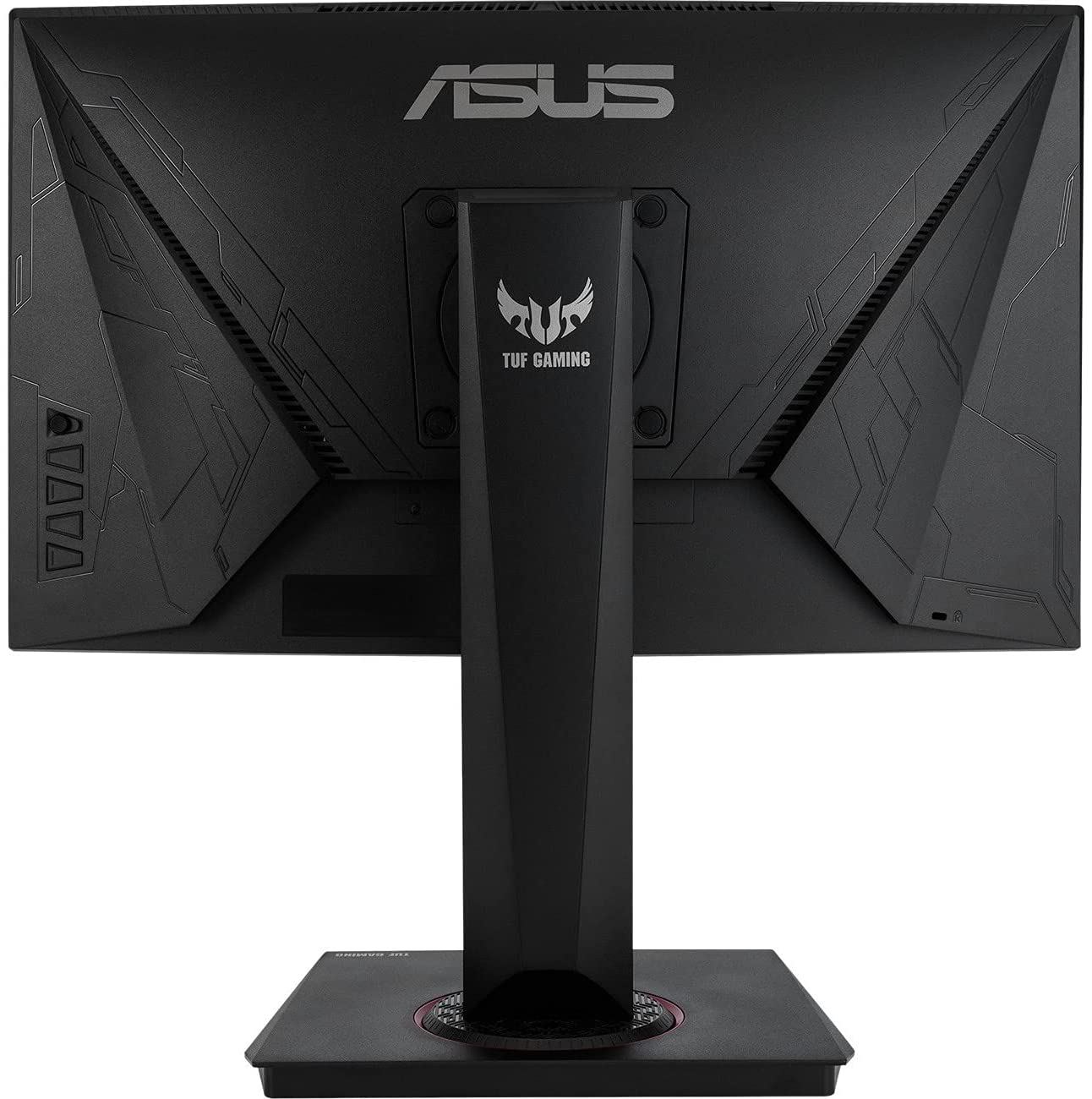 The Asus VG24VQ is a TUF Gaming variant, so it looks simplified and in contrast with the flashiness of its ROG counterparts. The monitor has a matte black chassis that will not clash with aesthetic setups, plus its easy to maintain. The display is bezel-free on three sides, but you will still see inner borders when it’s in use.

One of the best things about regular-sized gaming monitors is their modest proportions. Most users won’t have issues with placement with this model since it is not overdesigned and oversized. It only needs 8.57 inches of depth from your desk and it’s not too heavy so it is portable enough to be brought to gaming events or LAN parties.

The Asus VG24VQ’s build quality is impressive for the price since it’s comparable to its higher-tiered siblings that cost fifty to a hundred more. The plastics used are thick and tough so they won’t crack or flex that easily with moderate force. The included stand is firm and stable so the screen won’t wobble or sag while you are furiously gaming.

The brand didn’t skimp on its control layout as well since it features the same joystick and hotkey combination that you will find on most Asus gaming monitors. It’s located at the back near the right side edge of the screen so it is easy to reach. Some brands like BenQ go as far as adding remotes, but it’s mostly unnecessary since it will raise the price considerably.

The stand included offers tilt, swivel, pivot, and height adjustments for your convenience and comfort. It is easy to get a preferred viewing angle, so you don’t have to spend extra on alternative options. VESA mounts only become necessary if you have multiple screens or if the desk is too small to accommodate the display.

One aspect that took a hit to lower the price is the Asus VG24VQ’s connectivity layout which only includes the basics. You get two HDMI 1.4 slots and a DisplayPort connector, along with a 3.5mm jack for headphones and speakers. its lack of extras like USB ports is justified since the price is very low, so we don’t think any buyer will miss them.

It is also surprising to find built-in speakers with the Asus VG24VQ since every other extra got shaved off. It’s still the usual 2-watt pair that sounds tinny and incapable of bass, but it’s always nice to have these add-ons if you are paying less. They aren’t usable for games and movies due to their weak output, but you can still utilize them for basic tasks like remote meetings or even some background music.

The Asus VG24VQ sports a 24-inch 1500r curved VA panel with a 1920 x 1080 resolution, a 144Hz refresh rate, and a 1ms MPRT response time. The backlight has a 350 cd/m2 maximum while the contrast ratio is listed at 3000:1 like most VA panels. This model doesn’t advertise HDR certification, but that’s okay since the level closest to it is incapable of appreciable performance anyway.

1080p monitors at 25 inches or below are still popular since almost everyone is comfortable with them. They are commonly used at work or in school, plus they are easy on the eyes since they aren’t too sharp like 4K displays. It’s also easy to run games at high framerates in this resolution, so most don’t have to spend a fortune to enjoy its benefits.

The Asus VG24VQ renders 97% sRGB and around 74% DCI-P3 which is decent, but not the most vibrant result we’ve seen. What’s impressive is the monitor’s default accuracy which only had a deltaE average of 2.63. Most users won’t have to calibrate it since it already looks balanced and natural out of the box.

Using a colorimeter on the display improved its dE average to 1.41 which is even better for daily use. A score like this is already good enough for content creation and some editing work. However, you need a colorimeter to achieve this, and it is not worth getting one for gaming or a budget monitor for the said purpose.

The Asus VG24VQ’s peak brightness reached 348 cd/m2 at 100% backlight so it can fight off glare in well-lit rooms. the monitor is capable of fantastic contrast, reaching as much as 3142:1 at 60% brightness. The screen is capable of deep blacks and convincing night scenes, unlike most Fast IPS panels which are also popular in this category.

Panel uniformity for the test sample didn’t show any issues like backlight bleeding or clouding. There is a variance in the backlight’s spread from the bottom to the top of the screen, but it is only noticeable when the display is scrutinized. Note that it is entirely possible to get a worse unit since there are tolerances to consider.

The VA panel’s pixel response time is decent as long as you put its trace-free setting to its 80 settings. There will still be some persistence and very minor overshoot, but it’s better than the default. You can also use the monitor’s ELMB feature which works better without locking out FreeSync and other settings, but strobing isn’t everyone’s cup of tea.

The Asus VG24VQ is compatible with both FreeSync and G-Sync so you don’t have to worry about losing VRR. This duality is essential now since most GPUs are still hard to find or overpriced, so you could be stuck with one or the other. Input lag sits at 4ms at 144Hz so the monitor is used for fast-paced or competitive gaming.

Thoughts on the Asus VG24VQ

The Asus VG24VQ is a great buy if you want great performance without spending a small fortune. It is fast and it has ELMB, plus its VA panel is capable of great image quality even if it’s not calibrated with a colorimeter. You are also getting essential creature comforts like the ergonomic stand at a lower price, and that’s something other brands cannot match.

However, it is far from perfect since it trades faster pixel response times for a higher contrast ratio with its VA panel. However, you are getting a capable gaming display for the price of an office variant, so we can’t really complain there.

Search
You are here: Home / Reviews / Asus VG24VQ Review – Affordable 144Hz VA Gaming Monitor with ELMB
This website uses cookies to improve your experience. We'll assume you're ok with this, but you can opt-out if you wish.Accept Read More
Privacy & Cookies Policy