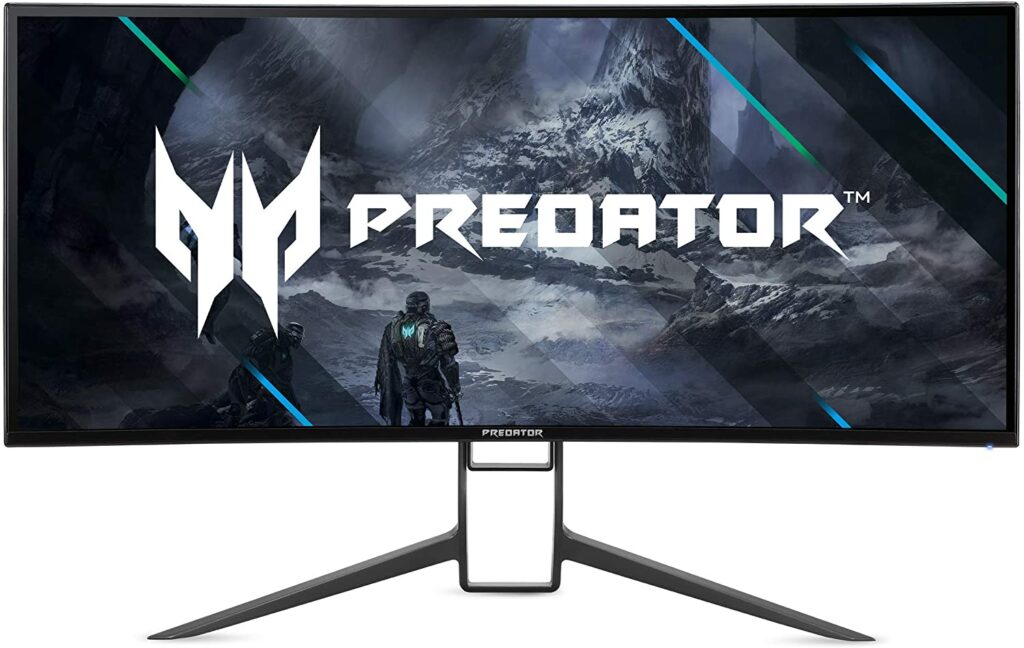 The Acer Predator X34 GS is the latest evolution of the very popular X34 from the brand made famous by its Predator gaming products. It adds the current industry standard specifications for gaming such as wide color gamut and HDR, but it also gets bumped up to 180Hz. The Acer Predator X34 GS costs less than the original even if it costs twice as something as the HP X34, so let’s check it out to see if it is worth it. 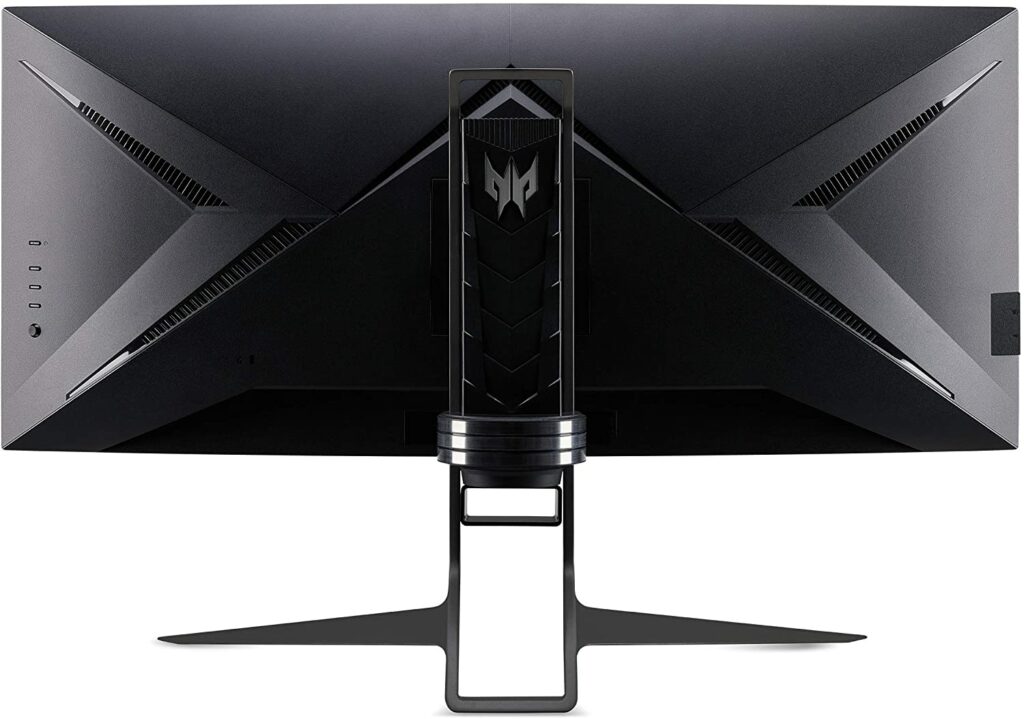 The Acer Predator X34 GS mostly follows the original’s aesthetics, but with a few touch-ups to bring it up to speed for the modern gaming market. It now has a matte black finish instead of the original’s glossy plastic and a more aggressive-looking stand with the same gunmetal base. It also has considerably thinner bezels than its predecessors, although you still get inner borders that are barely there.

It’s a huge monitor, and it doesn’t help that it has an overdesigned stand which is part of its character as a Predator variant. It needs over a foot of depth and its width can surprise you if you have a narrow desk or if there are huge desktop speakers on it. It’s not the lightest monitor out there, so it might be wise to ask for help in setting it up to avoid accidents.

Its build quality is fantastic thanks to its premium nature coming from Acer’s Predator lineup. The plastics used are thick and durable, while the stand provides excellent stability thanks to its design and metal stand. The screen wobbles if you nudge the screen accidentally, but that’s because of the weight more than a weak hinge.

Another improvement for the Acer Predator X34 GS over the first model is it now has an OSD joystick. It’s the preferred way of controlling OSDs now since it’s more intuitive, tactile, and less time-consuming, especially if you calibrate regularly. Its located at the back near the right-hand side of the screen, but it will still be within reach for most users.

The stand included with the package offers tilt, swivel, and height adjustments for your convenience. Pivoting wasn’t included since ultrawide monitors were not meant for portrait viewing or as a secondary display on the side. You can use VESA mounts, but we’d rather use the superbly crafted stand if you have the space to accommodate everything.

The Acer Predator X34 GS’s connectivity layout has also been brought up to speed, plus it’s not bound by the old G-Sync module’s limitations. You get two DisplayPort 1.4 slots, two HDMI 2.0 slots, plus an 85-watt USB-C with DP Alt Mode. That allows you to connect a multitude of devices, including modern laptops.

It also has four USB 3.0 ports for your accessories and a 3.5mm jack for headphones or speakers. it does have built-ins with 7 watts of power and DTS tuning, They sound better with a tiny bit of bass and better clarity, but you’ll be better off with headsets or desktop speakers. They will help enhance the monitor’s immersive qualities which are some of the reasons why you are going with an ultrawide in the first place.

34-inch ultrawides are popular because they offer a lot of space and just the right amount of sharpness and detail. The smaller 27-inch regular models have a higher pixel density, but that advantage isn’t too far off even if you compare them side by side. It will also take more GPU horsepower to reach that 180Hz limit for most games, although it’s not as demanding as a 4K screen.

The Acer Predator X34 GS renders 100% sRGB and around 95% DCI-P3 for excellent vibrancy in any type of use. its also pre-calibrated, so its default accuracy only has a deltaE average of 1.24, which is excellent for a gaming variant. Most users won’t need to calibrate it, although there is still room for improvement if you have the tools to squeeze it out.

Calibrating the display reduced the deltaE average to 0.44 which is fantastic considering that this was not made for editing work. however, you need a colorimeter to achieve this kind of improvement, and those aren’t free or cheap. We only recommend buying them if you are into color-critical work and would use the monitor for making money.

The screen’s backlight reached 405 cd/m2 in SDR and it peaked at 548 cd/m2 when its HDR emulation kicked in. Its contrast, however, remained unremarkable at 1144:1 at 50% brightness, just like most IPS monitors without FALD backlights. It can’t produce deep blacks, especially with the lights out, plus its HDR performance is also underwhelming.

The monitor’s panel uniformities also have some issues due to some minor backlight leaks at the top edge of the screen. They showed up as clouding tissues and they are most noticeable when the monitor is used in the dark. This issue is common with IPS panels and curved variants, but it is possible to get a better unit.

One of the Acer Predator X34 GS’s biggest strengths is its superb pixel response time as described by its Agile Splendor branding. It only shows minor blurring with its overdrive turned off, so most won’t even need it. However, we recommend using its Normal level to clean it up further and make it usable for E-Sports or fast-paced games like simulators or shooters.

The Acer Predator X34 GS is compatible with both FreeSync and G-Sync so you aren’t stuck with Nvidia’s implementation like the older model. That’s handy to have so you don’t have to ditch the monitor if you switch GPU brands, especially now that they are very expensive. Its input lag sits at 4ms at 180Hz so there is no need to worry about delays while gaming.

The Acer Predator X34 GS is a great option if you want a fast and vibrant ultrawide for immersive or competitive gaming. It’s virtually blur-free and capable of smooth visuals, plus it is color accurate out of the box. It’s also well-designed and equipped with modern features which round up the package of being an upgrade over its predecessor.

The Acer Predator X34 GS is still quite pricey in a market where sub $500 like the HP X34 can offer a comparable performance. It doesn’t have the same feature set and aesthetic, but it has a good and vibrant IPS panel with high refresh rates. However, we still think that it’s a great pick, even if you are coming from its older versions.