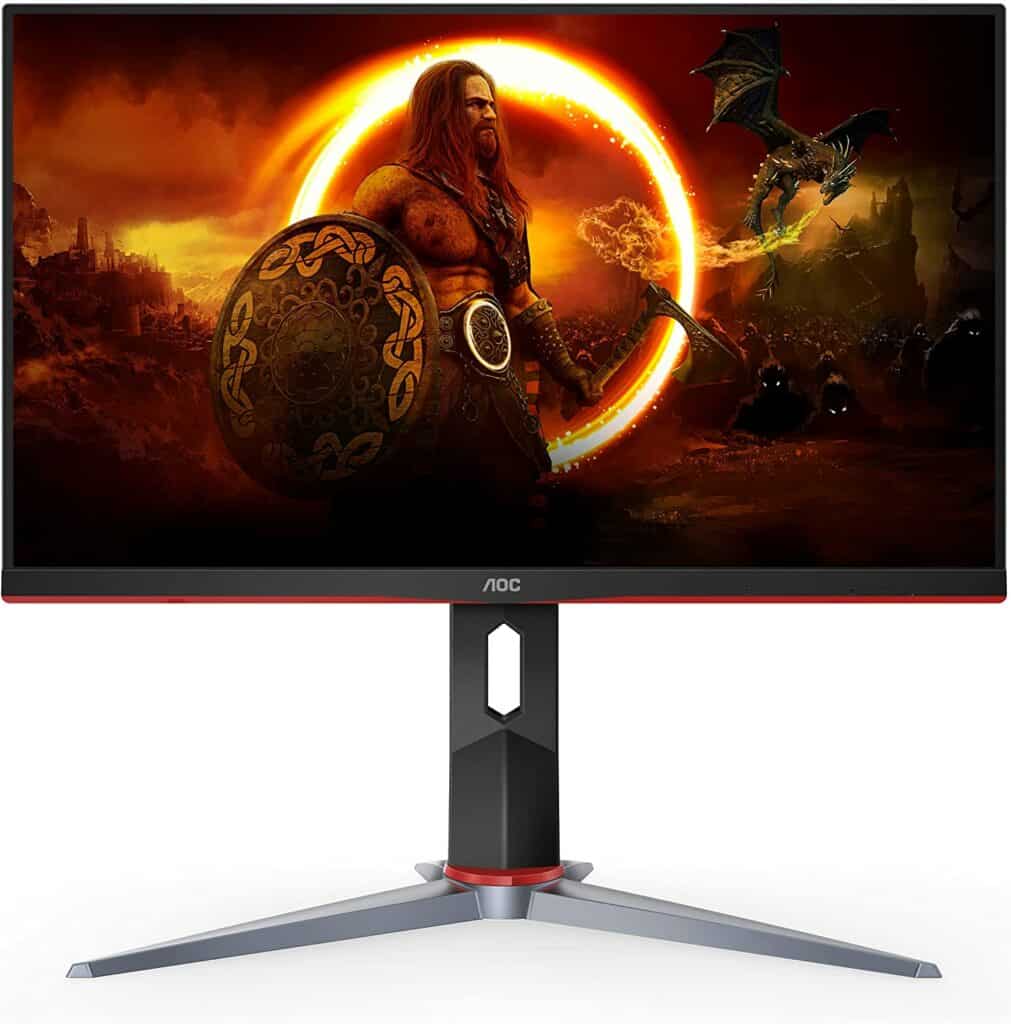 The AOC 24G2SP is the refreshed version of the AOC 24G2 which was one of the best-selling 144Hz IPS gaming monitors in recent times. Not a lot has changed, but it got a bump in speed so it is going to be more attractive to avid gamers. Let’s check out if the AOC 24G2SP is a true successor to the 24G2’s success or if it’s just a minor upgrade. 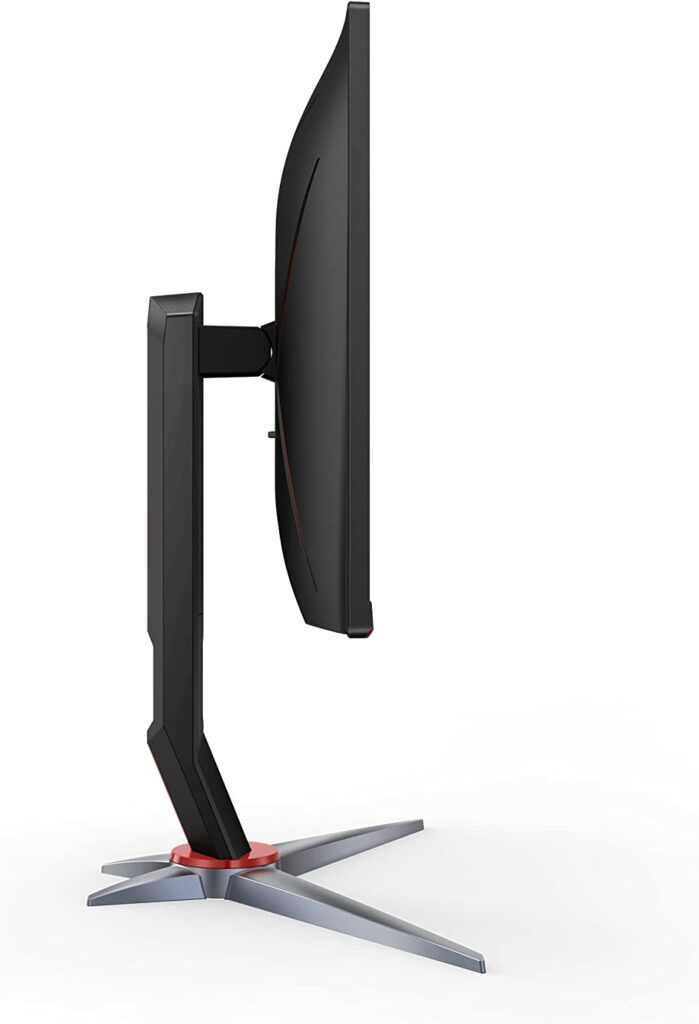 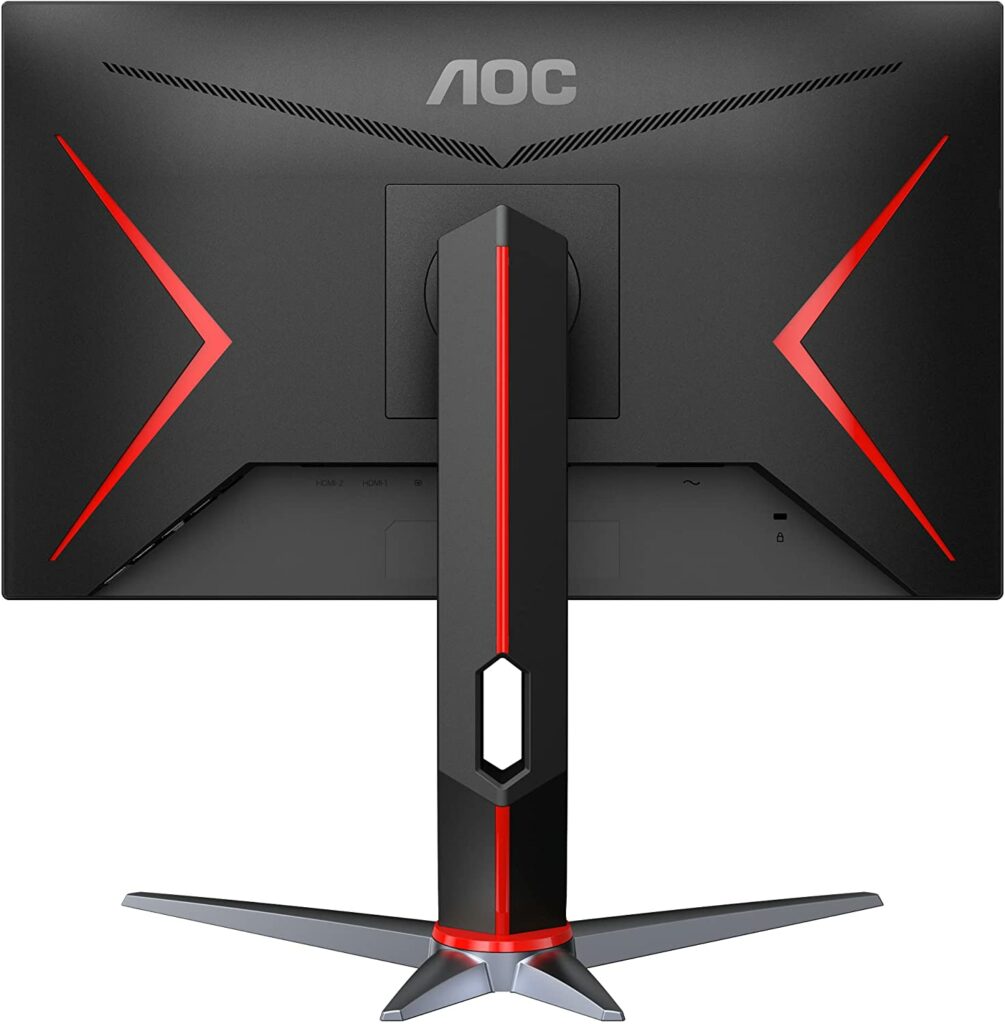 The AOC 24G2SP doesn’t look any different from the AOC 24G2, so the only way to find out is to check their panel properties. The monitor has a matte black chassis with red accents and a satin silver base which differentiates it from the 24G2SPU which has USB ports. The display is bezel-free on three sides, but you will still see inner borders when it’s in use.

Most won’t find it difficult to fit this monitor into existing setups since it’s just the right size for most desktops. The base is oversized so it needs almost 9 inches of depth, but that’s okay since it also means that it will be stable. The device when fully assembled only weighs in at 9.37 pounds so it’s portable enough to be brought to LAN parties or moved around.

It’s a budget model, but its build quality is decent enough to be comparable with its more expensive counterparts. The plastics used feel a bit thinner, but they are durable enough to withstand moderate force and avoid flexing or cracking. The included stand is stable and firm so the screen won’t shake or sag while you are enjoying your games.

One downside of the AOC 24G2SP is its use of buttons for the OSD instead of a more convenient joystick. The keys are located under the bottom bezel so they are accessible, but it still takes more time to get to a specific sub-menu or setting. You will also find a power LED on the right side of the buttons that glow white when it’s turned on and orange when it’s in standby mode.

The stand included with the package offers tilt, swivel, pivot, and height adjustments for your convenience. It is easy to get a comfortable viewing angle, although the base that comes with it might be too big for those with compact desks. You can use VESA mounts instead, but buying one is only necessary for a few select circumstances.

The AOC 24G2SP’s connectivity layout only includes a DisplayPort 1.2 slot, two HDMI 1.4 ports, and a 3.5mm jack for headphones. This is understandable since it is a budget model that’s considerably cheaper even when compared to its closest competitors. Note that you need to get the 24G2SPU variant if you want USB ports, but it is not available in all regions.

It’s surprising that this monitor even includes a pair of built-in speakers despite its very low pricing. They only have 2 watts of power so they sound tinny, so they are unusable for gaming or media consumption. However, it is nice to have a backup set at this price especially since there isn’t a lot that offers speakers at this price range.

The AOC 24G2SP sports a 24-inch IPS panel with a 1920 x 1080 resolution, a 165Hz refresh rate, and a 1ms response time. It’s backlight got bumped up to 300 cd/m2 while its contrast remains at 1000:1 like most IPS panels. The extra refresh headroom and backlight output are minor upgrades, but improvements that do not raise the cost of a monitor considerably are always welcome.

1080p monitors aren’t popular for their high pixel counts or sharp details, but they are affordable and quite easy to use for everyone. It doesn’t take a lot of GPU horsepower to reach the 165Hz threshold, and it is easy to read, write, and browse since the screen isn’t too sharp. It is also a fact that many individuals are used to the resolution since it’s still commonly used at work or in schools.

The AOC 24G2SP renders more than 100% sRGB and around 85% DCI-P3, allowing its vibrancy to punch above its price range. It’s not as accurate out of the box as its predecessor with a deltaE average of 1.66, but that’s still very good for a budget gaming model. Most users won’t need to calibrate it since it already looks balanced by default.

Calibrating it reduced the deltaE average to 0.89 which is even better than the default setting.  The downside is you are going to need a colorimeter to guide you and get this kind of improvement. The gadget itself is more expensive than the monitor, so we don’t recommend getting it for any reason other than using the 24G2SP for editing or content creation.

The AOC 24G2SP’s backlight reached 399 cd/m2 at 100% so it can fight off glare in well-lit rooms like those with plenty of windows. Its contrast reached 1311:1 at 50% brightness, but it is still unable to produce deep blacks like VA or OLED panels. Most IPS monitor barely breach 1000:1, so this is still a good characteristic even if the improvement it brings are considered minor.

Its panel uniformity didn’t have any major issues brought about by backlight bleeding. There is some variance in the backlight’s spread, but it’s not noticeable unless you have an all-black image on or if you scan the monitor with a colorimeter. Note that this can vary between every unit due to manufacturing tolerances, so there are worse ones out there.

The AOC 24G2SP’s pixel response time isn’t perfect, but its overdrive feature is quite capable. We recommend using the Strong level for 144Hz and 165Hz modes since it cleans up the persistence and minor smudging quite well. The monitor even has an MBR or strobing setting, but it is unusable in our opinion due to the noticeable flickering.

The AOC 24G2SP is compatible with both FreeSync and G-Sync so you don’t have to worry about tearing and stuttering. Both GPU brands have excellent 1080p cards, so it is wise to get a monitor that will not limit you to one brand. Its input lag sits at 4ms at 165Hz so there is no need to worry about delays while gaming.

Thoughts on the AOC 24G2SP

The AOC 24G2SP isn’t a considerable upgrade over its predecessor, but it’s a great buy judging from its price-to-performance ratio. It features an accurate IPS panel with great responsiveness so its great for all-around gaming. It is not the most feature-packed, but it already includes a fully-adjustable stand at a price where most are limited to tilting.

It’s hard to complain about the AOC 24G2SP since it’s very affordable and it already provides great gaming and imaging performance. There’s the lack of USB ports and its use of buttons for the OSD, but these are acceptable sacrifices in exchange for a lower price tag. It’s a great buy for gamers who want great colors and responsiveness at a wallet-friendly price point.