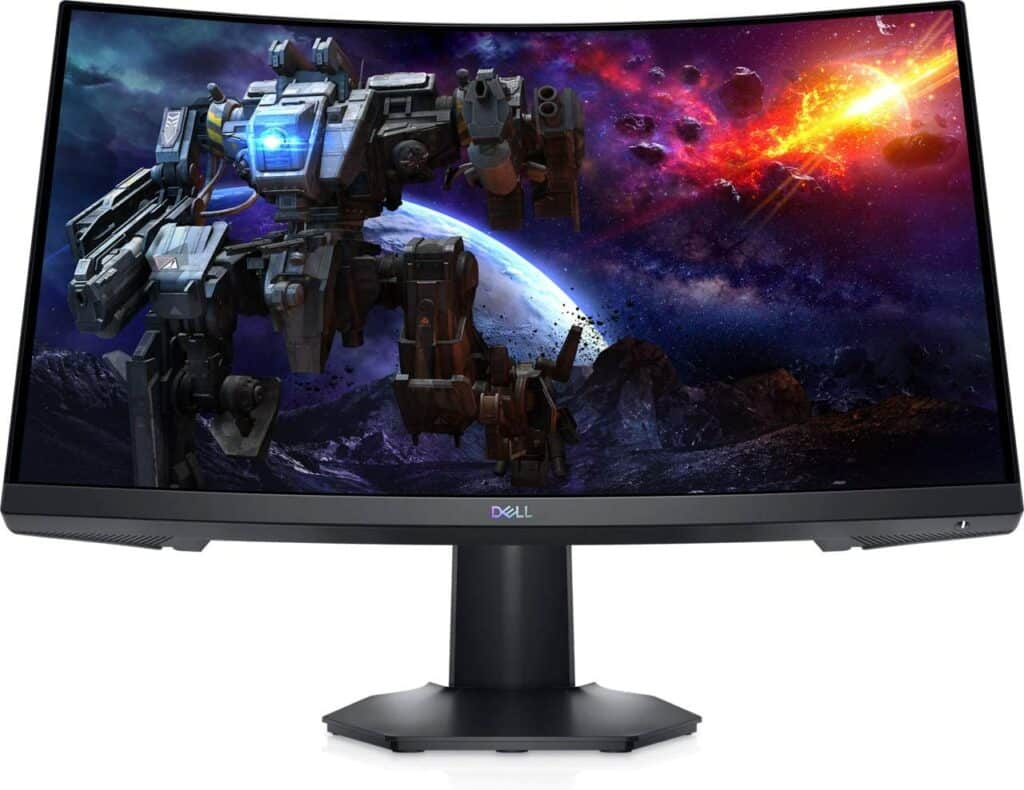 The Dell S2422HG is a relatively cheap gaming monitor that offers decent specs and a curvature that’s not available on the G2422HS. The main difference between the two is this model’s VA panel which has the advantage when it comes to contrast output. It has disadvantages, but let’s check the Dell S2422HG out to know if it’s the better pick for sub-$200 gaming displays. 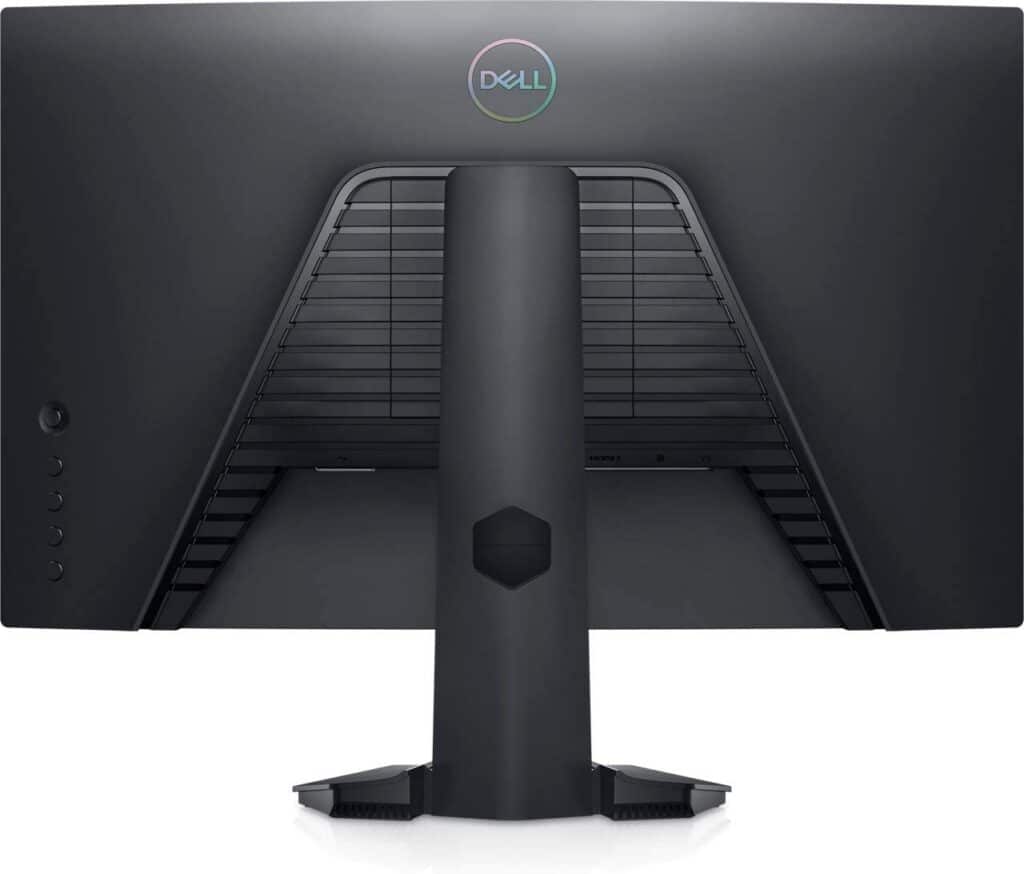 The Dell S2422HG looks just like the S2522HG, but it has a curved shape and a different panel type. It has a matte black chassis that will not look out of place in any setup, including those that are disguised as productivity systems. The display has a three-sided bezel-free design so it looks cleaner than some of its competitors.

Dell has been reducing its overall impact on the environment so each product is consciously designed to use fewer materials and the resulting waste. The monitor has a smaller footprint on your desk because of this initiative. It is also lighter so it’s portable enough for LAN parties and competitions.

Its build quality was not compromised, although many could mistake the low weight and think of it as flimsiness. Its plastic panels are thick enough to resist flexing and cracking, and there were no cosmetic defects on the monitor. The included stand is firm and stable so the screen won’t sag or shake while it’s in use.

The Dell S2422HG has an OSD joystick at the back with a few hotkeys for easy access to its features. The layout is located at the back near the right side edge of the screen so you can reach it easily. Some premium offerings have remotes, but that’s mostly unnecessary for desktop use.

The stand included with the package only offers tilt and height adjustments. It is not as flexible as some of its competitors, but that range of movement is all you will need to get a comfortable viewing angle. You can also replace it with a VESA mount, but that’s an extra expenditure that isn’t necessary all the time.

The connectivity layout is one of the things that took a hit to make this model affordable. You only get DisplayPort 1.2 and two HDMI 2.0 ports for most gaming devices. You only get a 3.5mm jack for headsets, but there are no handy USB slots since this is a budget monitor.

Another missing feature on the Dell S2422HG is a pair of built-in speakers. That’s okay for most gamers since they will use headsets anyway. Most built-ins also lack power and clarity, so you aren’t missing anything special if a monitor doesn’t have them.

The Dell S2422HG sports a 24-inch curved VA panel with a 1920 x 1080 resolution, a 165Hz refresh rate, and a 1ms boosted response time. The backlight has a 250 cd/m2 maximum output while the contrast is listed at 3000:1. This model doesn’t advertise HDR features, but that’s understandable since it’s a budget model with limited features.

1080p monitors are still popular even if they aren’t the sharpest in the current market. It’s easier to read and type with them, and games will run at high framerates with almost any GPU. It is still the favored format for competitive play, so it should be a decent upgrade for any E-Sports aficionado.

The Dell S2422HG renders more than 100% sRGB and around 89% DCI-P3 for stunning colors in games and movies. It is also decently accurate out of the box with a deltaE average of 2.18 which is just under the ideal score. Most users won’t need to calibrate it so it’s ready for gaming right away.

Calibrating it reduced the dE average to 1.51, making it usable for some editing and content creation. However, you will need a colorimeter to get the same level of improvement since it’s already tweaked properly by default. Getting the gadget is only worth it if you are using it for work but getting a prosumer display might be a wiser option for that.

The Dell S2422HG’s backlight reached 328 cd/m2 at 100% which is well above its rated specification. Its contrast ratio reached 3211:1 at 60% brightness so it’s capable of deep blacks, unlike its IPS counterpart. It is great for games and movies, but it has its limitations as tradeoffs as well.

The main disadvantage of VA monitors is their slower pixel response time compared to modern IPS and TN types. It is prone to some blurring in fast and contrasting transitions like most of its competitors. You need to apply some overdrive to lessen it, but we can only recommend the Faster level since maxing it out will overshoot.

Panel uniformity for the sample had some minor backlight leaks at the corners of the screen. They become noticeable in dark scenes but are almost invisible when there is a full-color image or a white background like a browser. Note that not every S2422HG will have this defect so it’s entirely possible to get a better unit.

The Dell S2422HG is compatible with both FreeSync and G-Sync so you don’t have to worry about losing VRR. This duality is a must-have feature now since both GPU brands are very competitive when it comes to 1080p graphics cards. Input lag sits at 4ms at 165Hz so the monitor is acceptable for E-Sports gaming.

Thoughts on the Dell S2422HG

The Dell S2422HG is a decent choice if you want a smooth gaming monitor without spending too much money. Its VA panel offers great colors and contrast and it’s built quite well for an entry-level gaming display. You get great performance for a low price, so what’s not to like?

Affordable monitors have quirks such as limited features, and this monitor isn’t an exception. The screen is too small to make the curve appreciable and it lacks some creature comforts that are offered elsewhere. The Dell S2422HG is also prone to blurring like most VA monitors, but that doesn’t mean that it’s an entirely bad deal for $200.