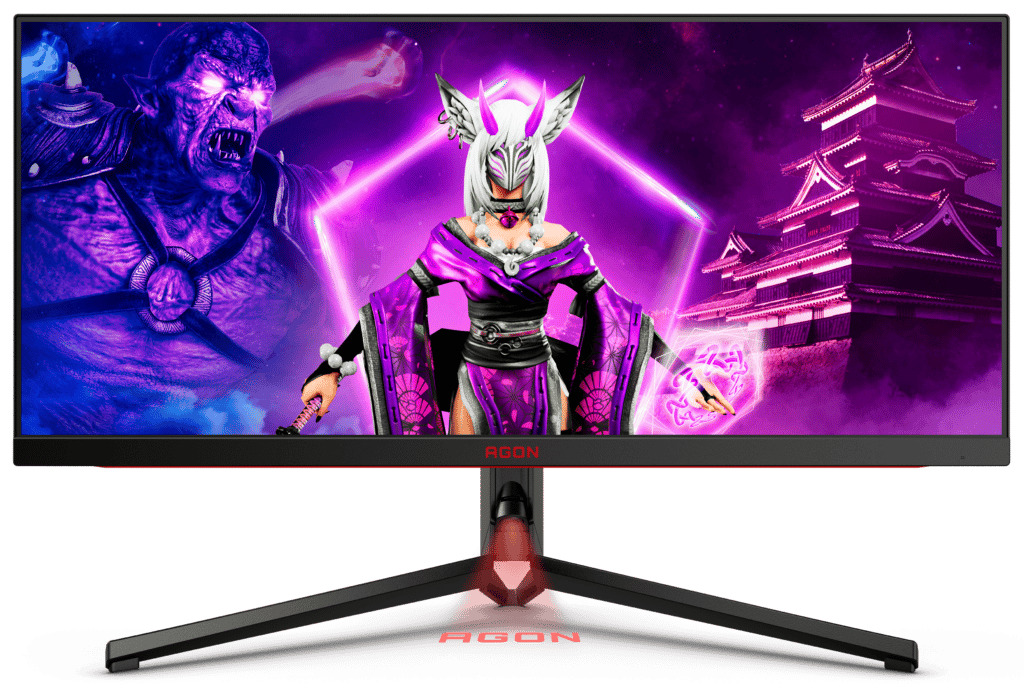 The AOC AGON Pro AG344UXM steps up its game by adding mini LEDs to an already attractive ultrawide gaming package. It’s the first 21:9 monitor with a mini-LED backlight, although other ultrawide form factors like the 49-inch Samsung Odyssey Neo G9 also have it. Let’s take a closer look at the AOC AGON Pro AG344UXM to know if it should be your high-end monitor upgrade for the holidays. 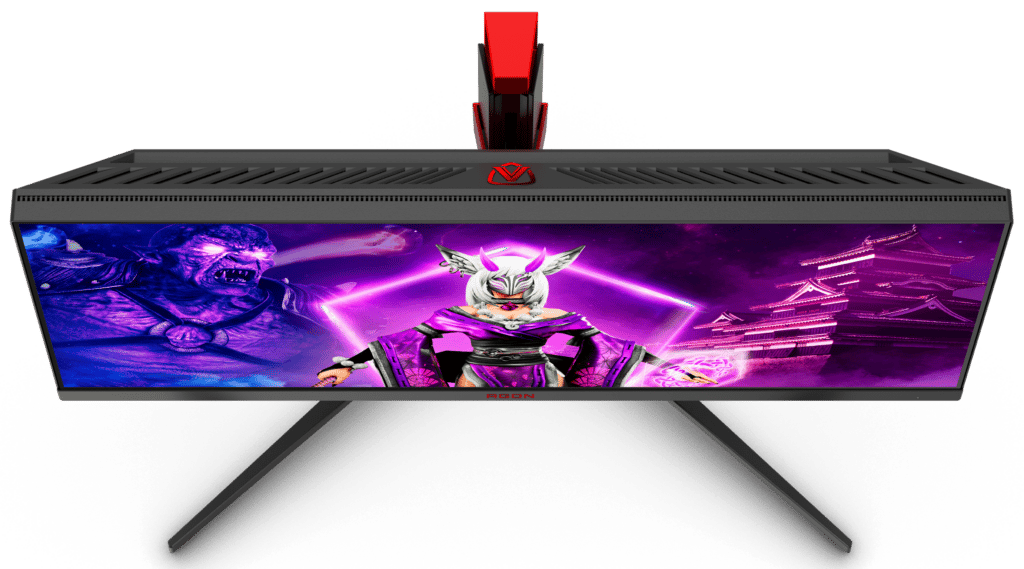 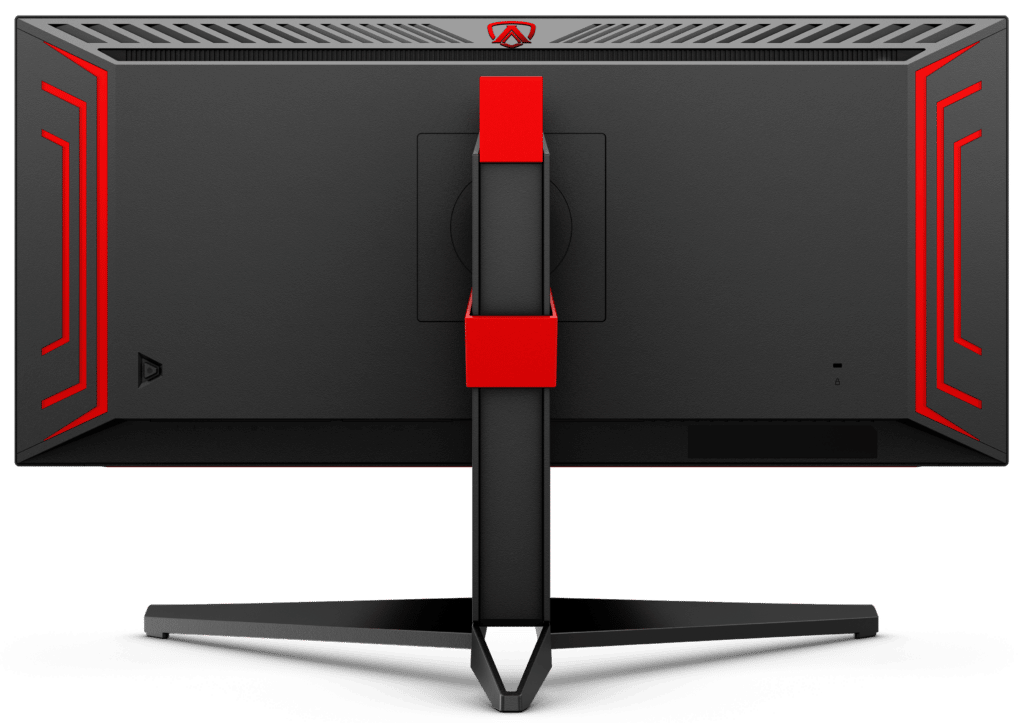 The AOC AGON Pro AG344UXM has a gamer-centric design, but it’s now more mature compared to its predecessors. The device has a matte black finish, but it has distinct red accents at the back and on the bottom bezel. The display has a three-sided frameless design, but it still has inner borders just like any other computer monitor.

It’s an ultrawide so it’s bigger than your usual office display, but it is not the biggest monitor we’ve seen to date. However, you have to prepare your desk since this monitor needs more than 32 inches of width and 15 inches of depth. It is also quite heavy at 28.15 pounds, so asking for help in setting it up will be wise.

This premium monitor has excellent build quality that matches its price point. The plastics used are thick and sturdy, plus there weren’t any cosmetic defects on any of the parts. The metal stand feels solid and heavy so the large display will not sag or wobble while you are in the middle of an intense session.

The AOC AGON Pro AG344UXM has a joystick, but it’s placed far to the right on the rear so it is difficult to reach. Thankfully, the monitor includes a quick switch remote which lets you access some of its key settings. It even has lighting that can be synced with the monitor’s RGB LEDs so you can complete your themed setup.

The stand included in the package offers tilt, swivel, and height adjustments for your convenience. You can’t pivot the screen, but that’s understandable since ultrawides were not meant for portrait use. You can use VESA mounts if you think the base is too big, but it is not going to be necessary for most if they have a standard-sized desk.

We love the AOC AGON Pro AG344UXM’s connectivity layout since it includes DisplayPort 1.4, two HDMI 2.1 slots, and a 90-watt USB-C port. You can use the monitor for most modern devices, including the latest gaming consoles or even a MacBook from work. You also get four USB 3.2 ports for accessories and 3.5mm jacks for audio input and output.

The monitor also has a pair of 8-watt speakers with DTS tuning that are capable of improved sound quality. They can be used for casual games or movies when it’s too hot to wear a headset, although the latter will still sound better. We like that the specifications are neatly packaged for the gamers, allowing them to maximize the money they are spending.

34-inch ultrawides are great for all types of use because of the extra peripheral view they offer. You can multitask easily with them, while games and movies will look better with wider spans or fields of view. You will need a more powerful GPU for it, but there are a lot of options now that can handle its demand.

The AOC AGON Pro AG344UXM covers more than 100% sRGB and 99.5% DCI-P3 for stunning vibrancy. Its default accuracy could use some improvement since the deltaE average is a bit high at 2.81, but most users won’t notice the variance. Gamers might even welcome the extra saturation levels, so it is ready for use right away.

Calibrating the monitor reduced the dE average to 0.51 which is excellent for a gaming-grade display. You can also use its sRGB mode if you don’t have a colorimeter since it had a decent 1.1 dE average without any tweaking. We can only recommend the added purchase of the gadget if you do color-critical work, so it is not necessary if you are only gaming.

The AOC AGON Pro AG344UXM’s backlight reached 698 cd/m2 in SDR, but it peaked at 1520 cd/m2 when it’s HDR mode was active. Its contrast, on the other hand, its contrast ratio was limited to 955:1 at 30% brightness, but the mini-LED backlight fixed that and expanded it exponentially. The monitor is capable of superb HDR performance and it’s considerably better than the older HDR 1000 models such as the Asus PG35VQ.

Panel uniformity from the test sample did not show any major backlight leaks or clouding issues. There was some haloing in select instances, but it wasn’t a big issue since you’d have to focus to see them. Note that this can change between every unit due to tolerances, so there are worse and better monitors out there.

The AOC AGON Pro AG344UXM has an excellent pixel response time so it’s usable for fast-paced games. There is some very minor persistence, but setting the overdrive to its Medium setting will fix it. The Strong setting is good to use as well, but it will start to show some overshoot if your framerate isn’t close to the 170Hz limit.

It is also compatible with both FreeSync and G-Sync so you don’t have to worry about stuttering and tearing. Both Nvidia and AMD have capable 1440p cards, so it’s best not to get stuck with either one. Input lag is at 4ms at 170Hz, making this monitor suitable for competitive gaming.

The AOC AGON Pro AG344UXM is a fantastic gaming monitor based on its overall performance and design. It presents rich colors and agility, so both content creators and gamers will love what it has to offer. The design also incorporates modern features, allowing you to use it as an all-in-one display for various devices.

We have very little to complain about with this monitor, except that it’s pricey and hard to find like many of the brand’s premium offerings. All its other limitations are minimal, so we can’t consider them as deal-breakers. It indeed is a great ultrawide upgrade, but you have to find it first on popular retailers.