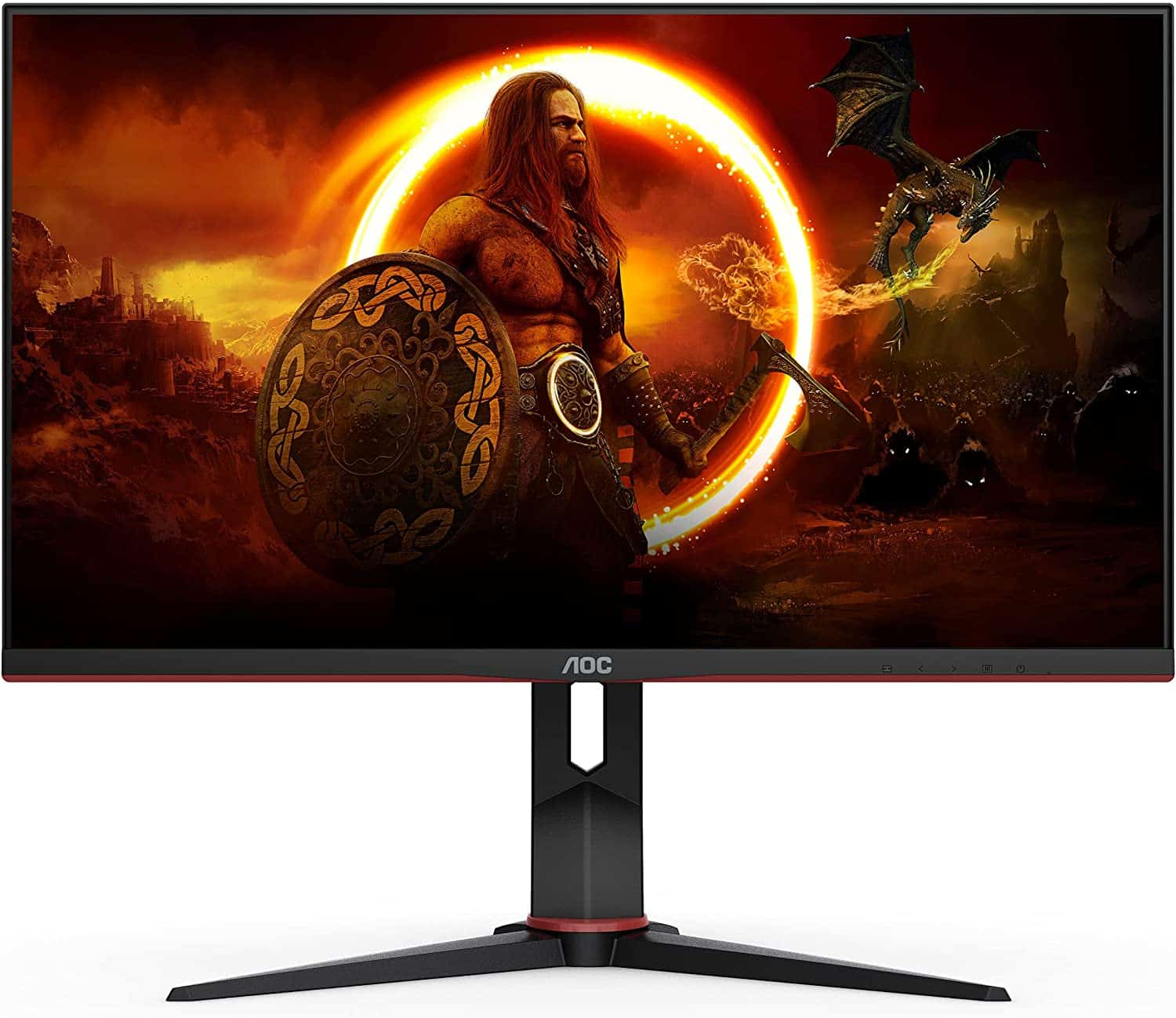 The AOC U28G2XU offers an easier-to-own solution for gamers who want fast 4K images without hurting their bank accounts. It’s lacking new features like HDMI 2.1, but 4K 144Hz monitors with the right price are what’s hot right now. Let’s check where the AOC U28G2XU stands when compared with the other contenders even if it’s lacking a few crucial features. 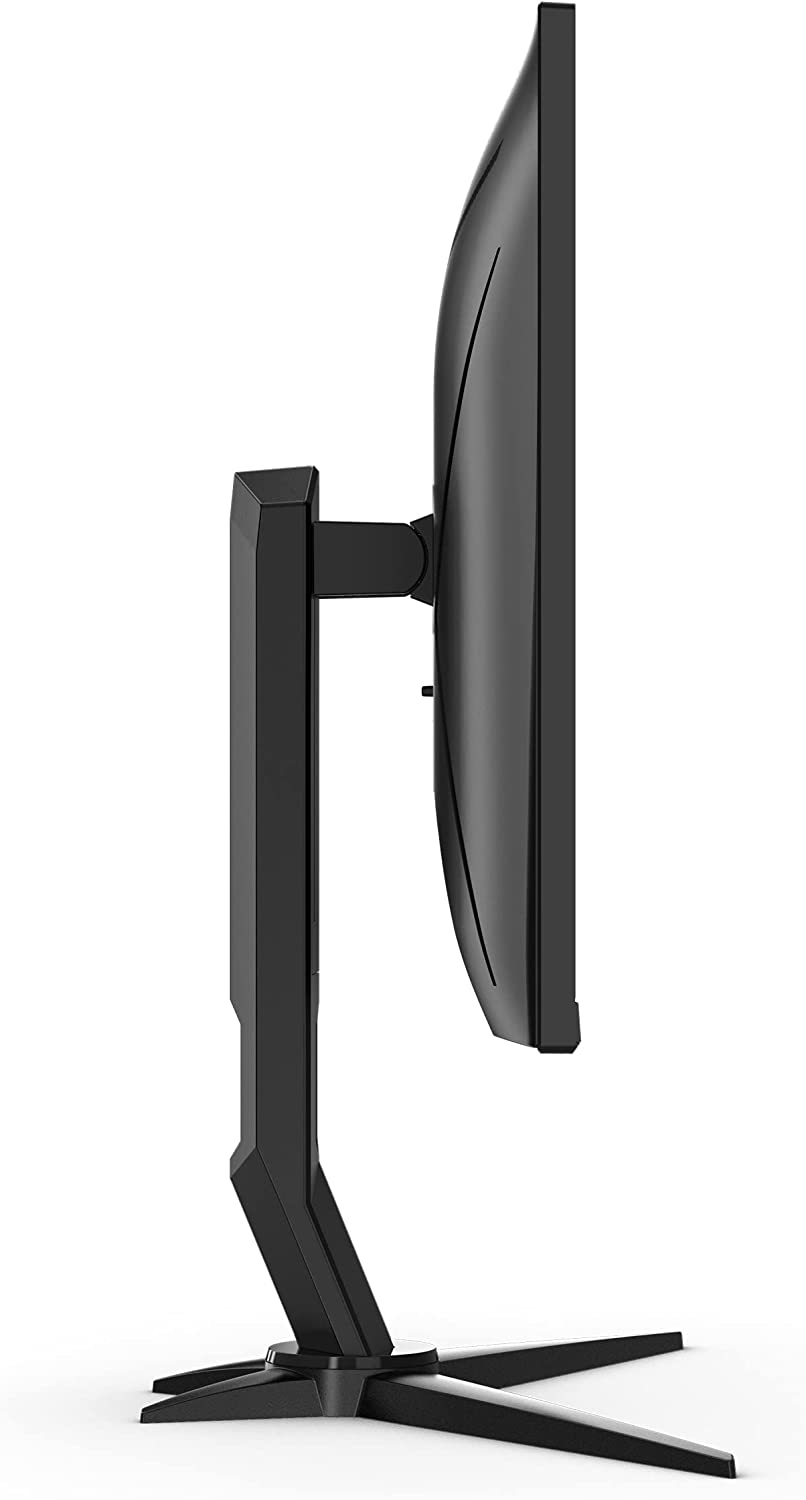 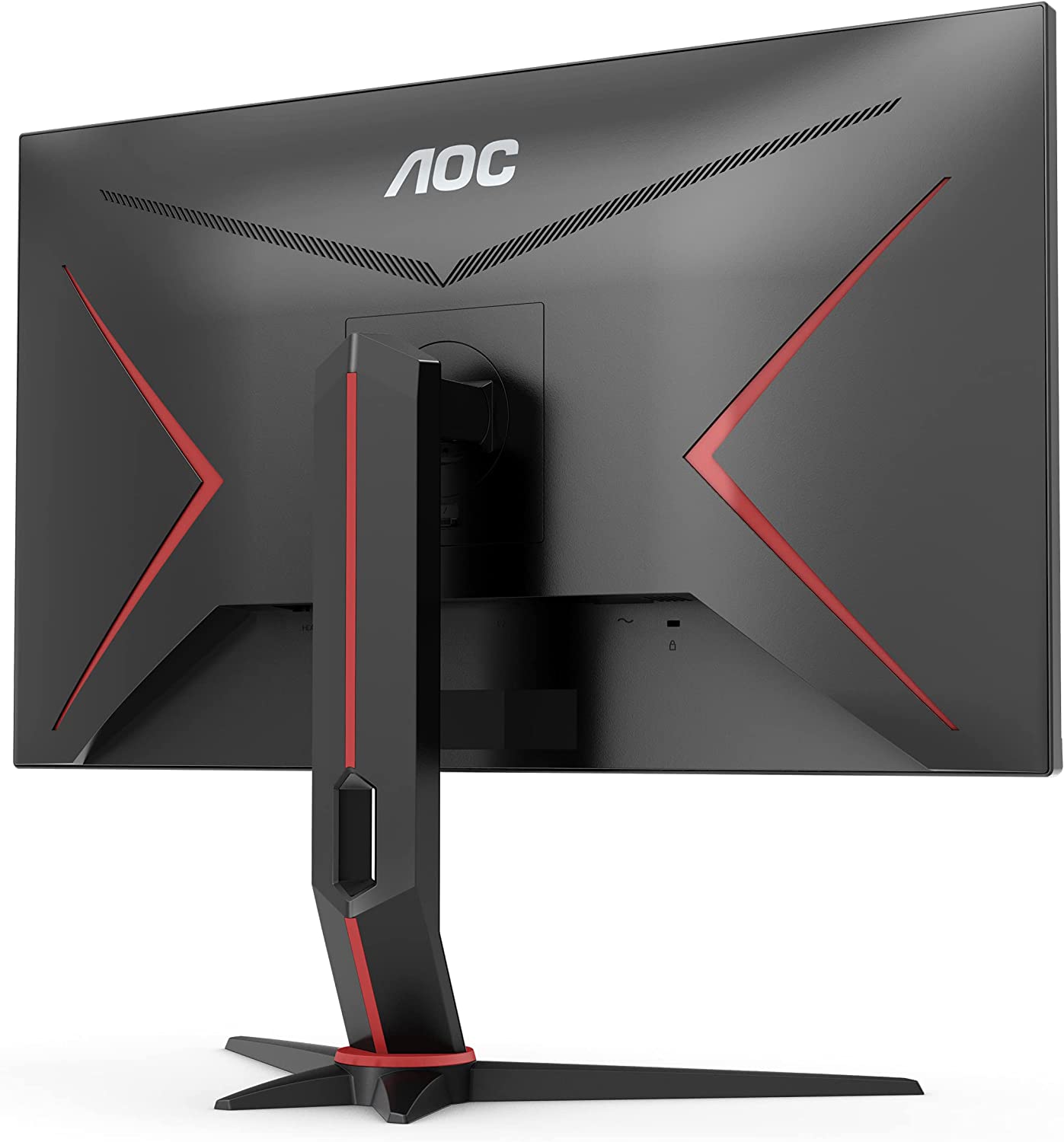 The AOC U28G2XU uses the same aesthetic as the rest of the G2 monitors like the AOC 24G2 aside from a few very minor details. It has a matte black chassis that’s decorated with red streaks in discrete spots so it won’t clash with most setups. The screen is bezel-free on three sides, but you will still see flushed inner borders on the top and side edges.

The monitor has modest dimensions, although it’s still a bit bigger than your typical office or school display. Its base has a wide reach, but it only needs a little under nine inches of depth from your desk. Its lightweight thanks to its generous use of plastics, so it is reasonably portable for LAN parties or for moving around when you want to rearrange your setup.

Build quality for the AOC U28G2XU is great despite the G2 line’s budget-oriented nature for all the models it offers. The device is made up of mostly plastic, but it’s reasonably durable and it doesn’t seem like it will crack or flex. The stand is robust and firm so it won’t sag or wobble while you are in the heat of battle.

The AOC U28G2XU doesn’t have an OSD joystick like most of the modern budget-oriented gaming displays. This is okay for most users, but it’s more difficult to use since getting to a specific setting usually involves several key presses. However, it is understandable to see this kind of implementation if the monitor’s price is considerably lower.

The stand included with the AOC U28G2XU offers tilt, swivel, pivot, and height adjustments for your convenience. Monitors that sit on lower price tiers usually get tilt-limited variants, so this is a big plus for the product. You can opt for VESA mounts, but it’s mostly unnecessary unless you have limited space or are using multiple screens.

The AOC U28G2XU’s connectivity layout includes DisplayPort 1.4 with DSC, two HDMI 2.0 ports, and four USB 3.2 slots for accessories and data transfers. What’s lacking here are HDMI 2.1 ports for 4K 120Hz operation with the next-gen consoles. New 4K 144Hz models like the Asus VG28UQL1A have them, but you have to spend more to enjoy that feature.

You also get a pair of 3-watt speakers with the AOC U28G2XU for basic uses such as background music or conference calls. We know that gamers will still prefer headsets since they are better for listening in to footsteps or immersion. The built-ins don’t sound great or powerful enough for gaming, but its always nice to have extra features to extend its value per dollar spent.

The AOC U28G2XU sports a 28-inch IPS panel with a 3840 x 2160 resolution, a 144Hz refresh rate, and a 1ms boosted response time. The backlight has a 400 cd/m2 maximum while the contrast ratio sits at 1000:1 like most IPS panels. This model is capable of HDR 400 standards, but we all know how limited that is in HDR performance.

4K  screens in this size are extra crisp since the pixels are packed tightly together so the density per square inch is also higher. This works great for games and movies, but some users might complain that it’s harder to read or browse since the letters will look smaller. You can use scaling to alleviate this, but that doesn’t always work with every app or game out there.

The AOC U28G2XU renders more than 100% sRGB and around 88% DCI-P3 which is excellent for a gaming monitor. The default accuracy had a deltaE average of 1.51 which isn’t perfect, but great enough for gaming purposes. The screen looks balanced and vibrant apart from some oversaturation in select instances.

Calibrating the AOC U28G2XU reduced its deltaE average to 0.67 which is something you’d see on a prosumer display. However, you will need to enlist the help of a colorimeter to get a score close to this. This isn’t necessary for gaming so most can get by with some tweaks, plus colorimeters aren’t exactly cheap, to begin with.

The AOC U28G2XU’s backlight only managed 302 cd/m2 at 100% while the contrast peaked at 931:1 at 60% brightness. The screen is unable to produce deep blacks so some dark scenes may look a bit washed out. This is a known limitation of IPS panels so going with VA or spending more on OLED is your best option if you want to avoid it.

Panel uniformity for the AOC U28G2XU was excellent since there were no backlight leaks or clouding issues. There were some deviances in the backlight’s spread, but it’s mostly unnoticeable while gaming. However, this could change between every monitor since IPS is more prone to it and there are tolerances to consider.

The AOC U28G2XU’s pixel response time is good enough to prevent blurring and ghosting while gaming. It still happens in fast-paced or contrasting transitions, so using a bit of overdrive will be handy if you play first-person shooters or anything similar. However, we don’t recommend maxing it out since doing so will add overshoot to the screen.

The AOC U28G2XU is compatible with both FreeSync and G-Sync which are necessary since it’s a 4K screen. Both companies have capable cards that are suited for this type of monitor, so having the freedom to choose would be nice. Input lag sits at 4ms at 144Hz, so there is no need to worry about delays while enjoying your favorite titles.

Thoughts on the AOC U28G2XU

The AOC U28G2XU is an attractive pick if you want to upgrade to high-end gaming without spending more than a thousand bucks. It doesn’t have true HDR qualities, but its IPS panel offers excellent image quality. It works great for fast-paced gaming since it’s smooth and fast, although you need a flagship card to maximize its 4K 144Hz output.

Most of the AOC U28G2XU’s weaknesses are either natural for its panel type or because of its value-oriented nature. Its downsides are minor when compared to its screen’s output, so we reckon they will only be deal-breakers for the meticulous. Overall, it’s an excellent buy, but its lacking HDMI 2.1 which is quite important for a monitor like this in today’s market.

Search
You are here: Home / Reviews / AOC U28G2XU Review – Affordable 4K 144Hz IPS Monitor for Gaming
This website uses cookies to improve your experience. We'll assume you're ok with this, but you can opt-out if you wish.Accept Read More
Privacy & Cookies Policy