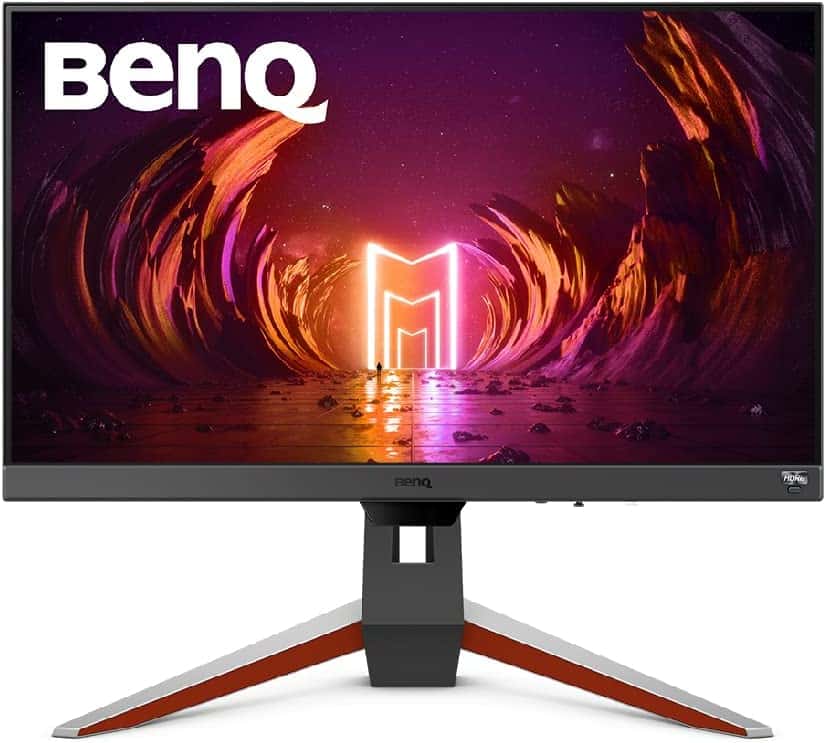 The BenQ Mobiuz EX240 is the latest budget gaming monitor for those who want to build a solid E-Sports or beginner setup. BenQ isn’t new in the competitive gaming market, and so far, all of their releases have been more or less on point. The BenQ EX240 could be your best bet at the $200, but let’s check how it performs before you pull the trigger. 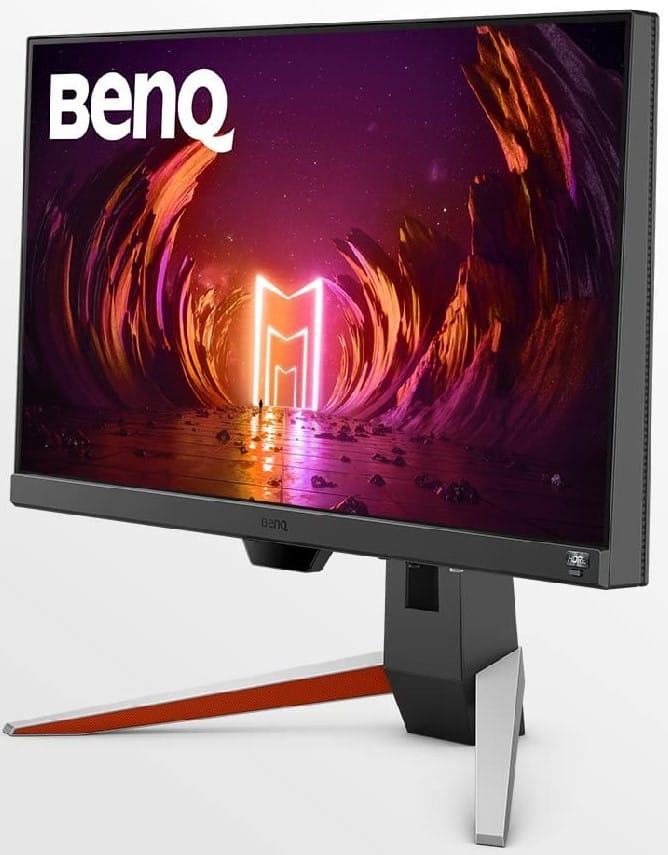 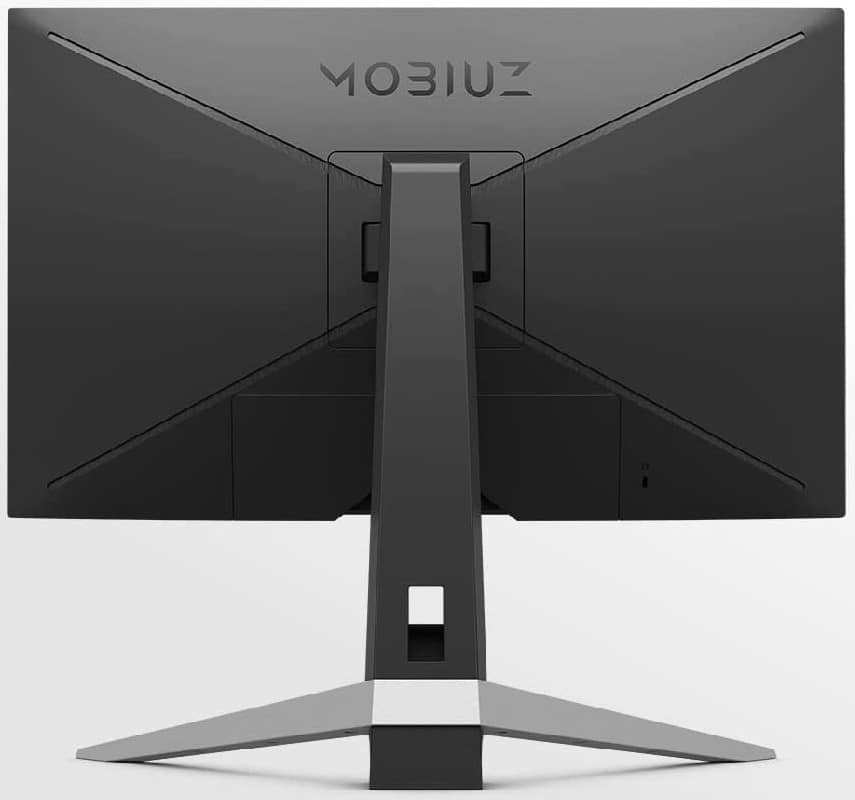 The BenQ Mobiuz EX240 has a few differences compared to the EX2510S, but the basic concept of the design is still there. The device has a matte black chassis plus a gunmetal and red accent on its base, but it still looks decent and clean compared to other gaming models. It also has a bezel-free design, but you still get inner borders and that thicker bottom strip.

This monitor is regular-sized by today’s standards, but its base is larger than it needs for more stability. The device needs almost ten inches of depth, but that will not be an issue because of the V-shaped feet. You can easily place peripherals between the legs or lift and move it to adjust your setup since it only weighs 30 pounds. 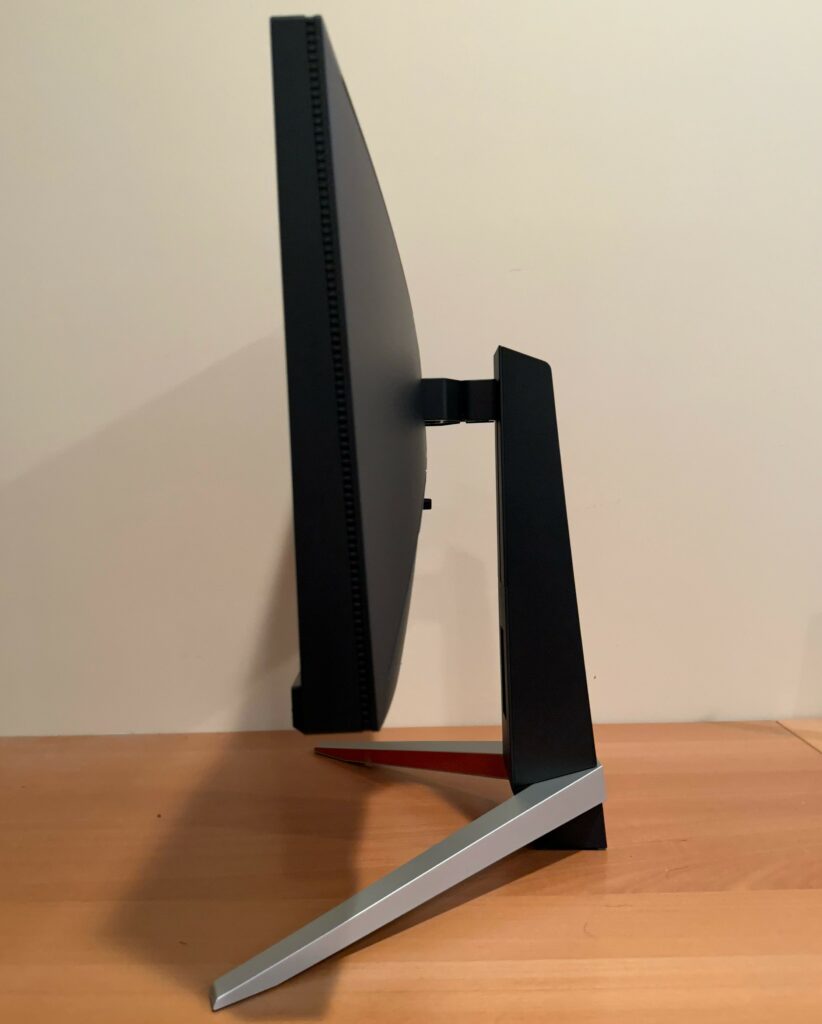 Its build quality is fantastic for the price, even if there are a lot of plastics on its major parts. We didn’t see any cosmetic defects or signs of weakness like flexing or susceptibility to cracking. It feels like a premium monitor all around, plus, that stand is relatively stable and reliable so that the screen won’t sag or shake while gaming.

The BenQ Mobiuz EX240 has an OSD joystick and dedicated buttons for its HDRi mode and power switching. The former is located under the bottom bezel next to the lighting sensor, so you don’t have to reach far to access it. Some BenQ monitors include remotes, but that’s not necessary for this model since the stock layout already works great.

The stand included in the package offers tilt, swivel, and height adjustments for comfort and convenience. You can’t pivot the screen, but that’s okay since this monitor wasn’t meant as a secondary portrait display anyway. You can also use VESA mounts, but that’s an extra expenditure reserved for special cases, like for users with tiny desks or multiple screens on deck. 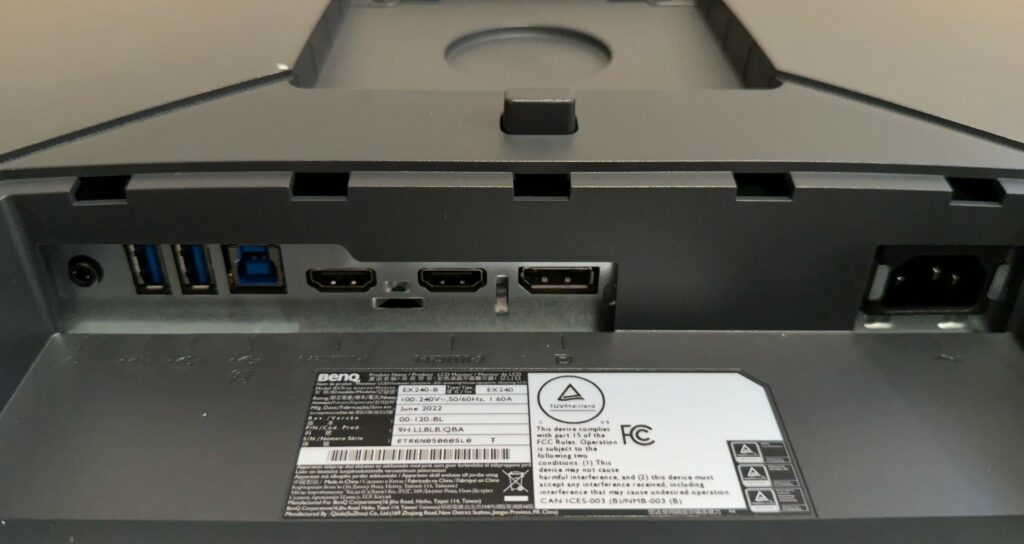 The BenQ Mobiuz EX240 has the standard DisplayPort 1.2 and dual HDMI 2.0 ports, but it now has USB 3.0 ports for your peripherals. The older models cost more than this, so the price you pay by choosing this goes a long way. We’d like to see USB-C in this category in the future, although it is not entirely necessary for gaming.

It also gets slightly stronger speakers with 2.5 watts of power, but they are far from what BenQ’s premium models with treVolo speakers offer. They are usable for basic audio like calls or even background music, but gaming or movies will demand something else. The built-ins do not have good bass or clarity, but that’s okay since it will be better with gaming headsets.

The BenQ Mobiuz EX240 sports a 24-inch IPS panel with a 1920 x 1080 resolution, a 165Hz refresh rate, and a 1ms response time. The backlight has a 350 cd/m2 output, while its contrast ratio is listed at 1000:1, like most IPS models. This model lists HDR10 compatibility but is not VESA-certified like the brand’s other gaming offerings. 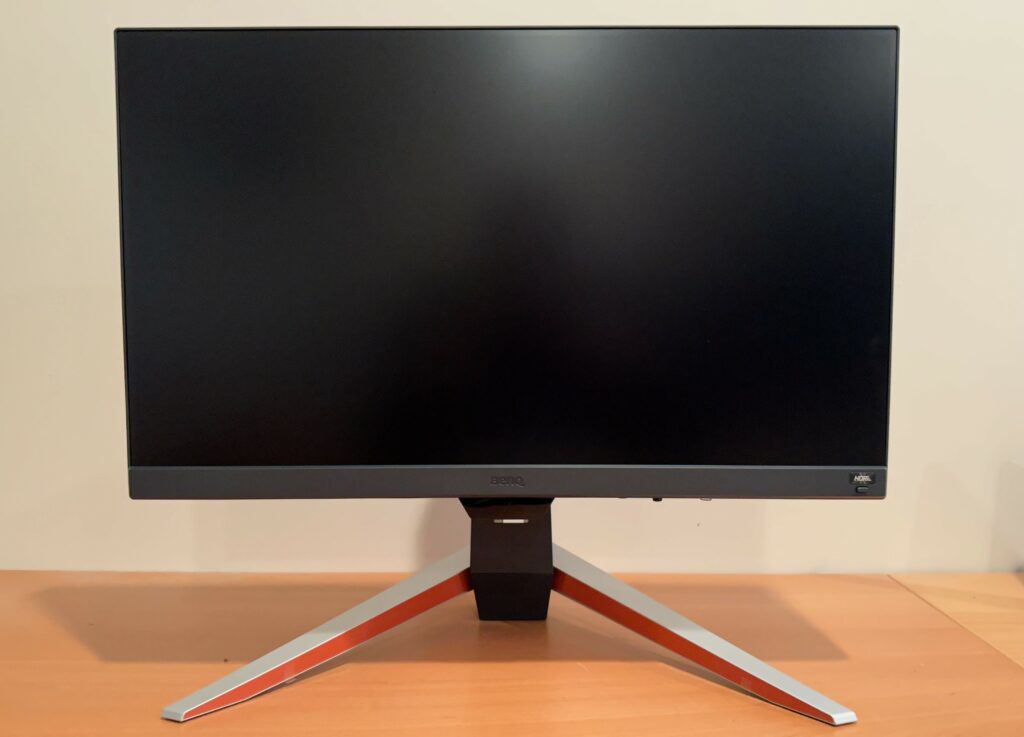 1080p monitors are still popular because they are commonly used in our daily lives and are still the standard format for E-Sports games. It’s easy to read and write with it, and most games will run at high framerates with any GPU. You can even go with an APU and still enjoy decent frames on some games, so monitors like this are perfect for entry-level builds. 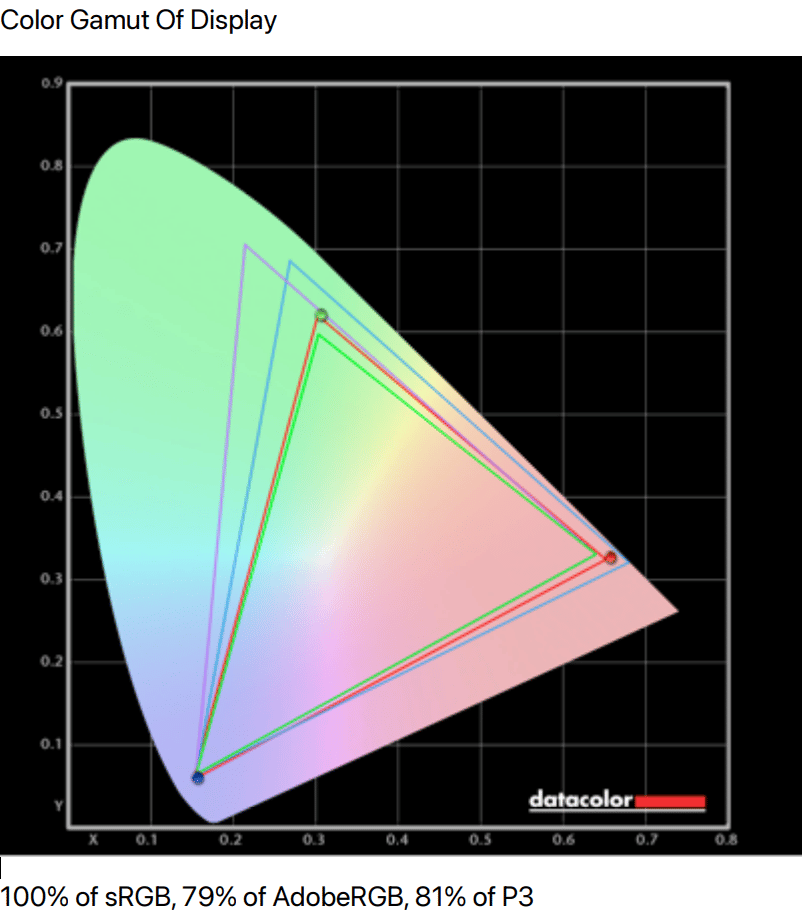 The BenQ Mobiuz EX240 covers 100% of sRGB and 81% DCI-P3 for decent saturation in games and movies. Its default accuracy isn’t great, with a deltaE average of 3.57, so it doesn’t look as natural as its predecessor. You need to use its sRGB mode, but it will drop some of that gamut coverage in exchange for a more balanced 1.61 dE score.

Calibrating the monitor manually reduced that high dE average to a more acceptable 1.16. It is not as good as the results from competitors like the AOC 24G2, but it’s a minor disadvantage. The biggest downside of going this route is having to buy a colorimeter which can cost more than the monitor itself.

Its backlight reached 349 cd/m2 at 100% output, but its contrast only reached 920 cd/m2 at 60% brightness.  That means it’s incapable of deep blacks and compelling HDR performance, even if it has BenQ’s HDRi mode. This is a common result with IPS panels, so it is not a deal-breaker for those who know what they are getting into. 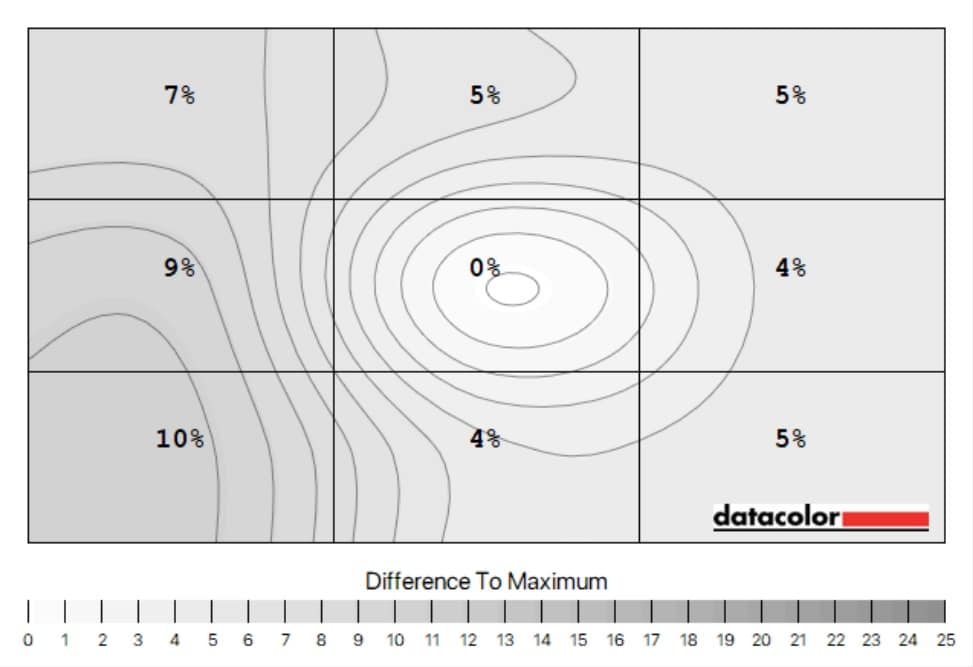 Panel uniformity for the test sample had some issues since the left side of the screen was brighter than the left side. It’s a minor difference but can become noticeable in dark scenes if you look closely enough. However, it would be best if you didn’t treat this as a deal breaker since every monitor will have different results, so there are better units out there.

The BenQ Mobiuz EX240’s pixel response time is great, provided that you set its AMA overdrive to its number 2 setting. It also has a Blur Reduction mode which uses backlight strobing for extreme instances. We usually don’t recommend that, but we like BenQ’s implementation here since it doesn’t lock out the monitor’s Adaptive Sync and AMA features.

It is also compatible with both FreeSync and G-Sync, so you don’t have to worry about the GPU you have. Its imperative to have this feature now, so you don’t have to ditch the monitor in case you want to switch GPU brands but still have VRR functionality. Input lag sits at 4ms at 165Hz, so it’s just as fast and suitable for competitive play as its competitors.

Thoughts on the BenQ Mobiuz EX240

The BenQ Mobiuz EX240 is an excellent choice if you want an inexpensive gaming monitor that will not disappoint. It’s not color-accurate out of the box, but it has accurate presets and superb gaming performance. We like its build quality and design, so there is very little to complain about for a monitor that only asks $200.

This model has no deal-breakers unless you are after accurate color and profound HDR performance. However, those are usually reserved for more expensive monitors, so we can’t treat the monitor’s lack of capability in those regards as faults. It’s a great buy at its current price for those who want a good gaming monitor for E-Sports or smooth visuals.

Search
You are here: Home / Reviews / BenQ Mobiuz EX240 Review – Affordable 165Hz IPS Gaming Monitor – Recommended
This website uses cookies to improve your experience. We'll assume you're ok with this, but you can opt-out if you wish.Accept Read More
Privacy & Cookies Policy