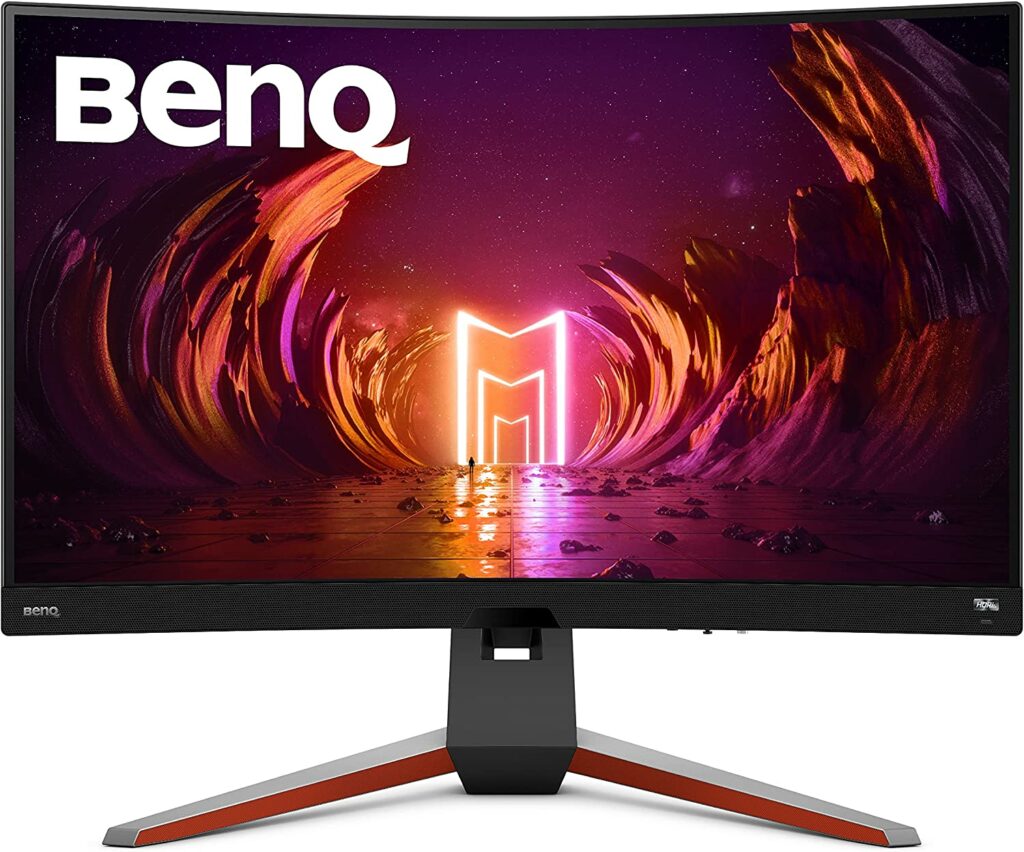 The BenQ EX3210R offers a large and engrossing curved display that’s perfect for all of your gaming and entertainment needs. It’s built and designed quite well like its Mobiuz siblings, plus it includes a convenient remote that’s useful for couch gaming setups. Let’s check the BenQ Mobiuz EX3210R out to see if it has what it takes to take the top spot in its very competitive segment. 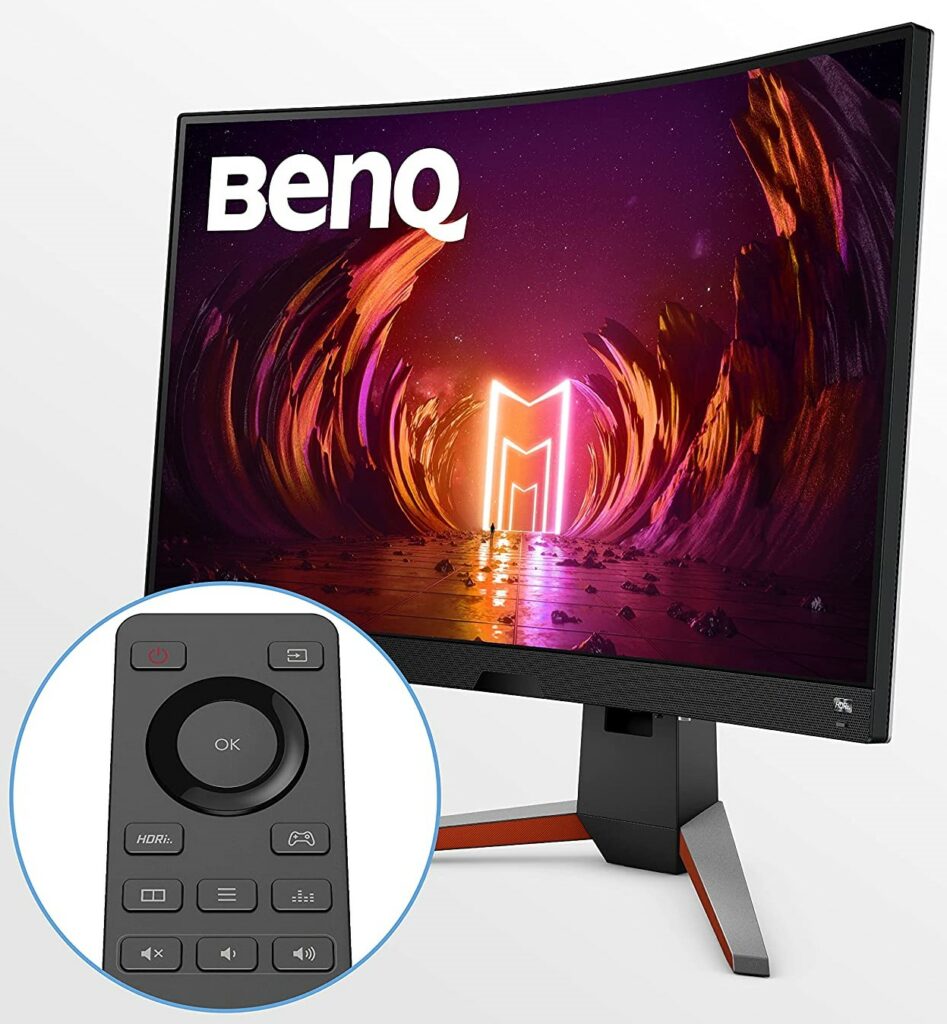 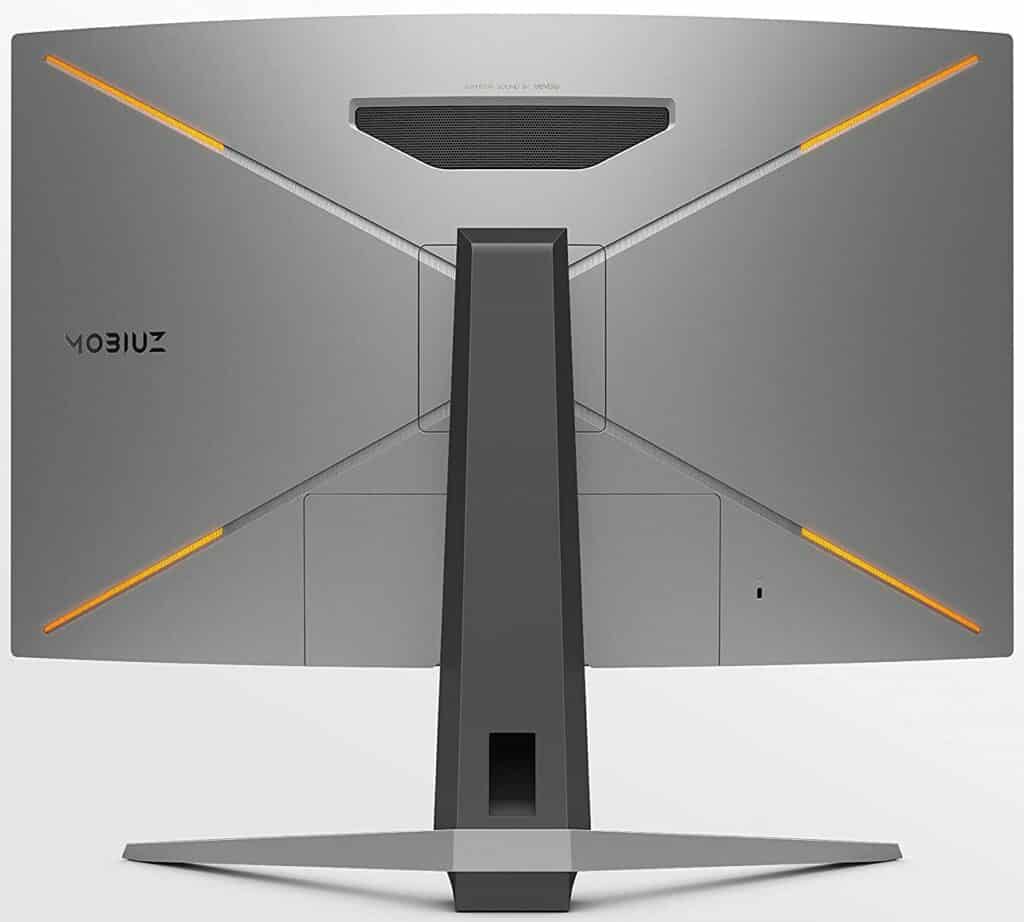 The BenQ Mobiuz EX3210R follows the design of its siblings so it looks a bit more gamer-centric than its competitors. The monitor has a gray and matte black chassis with RGB lights, and it also has red streaks on the legs of its base. The display has a bezel-free design, but you still get minimal inner borders which become visible when the screen is in use. 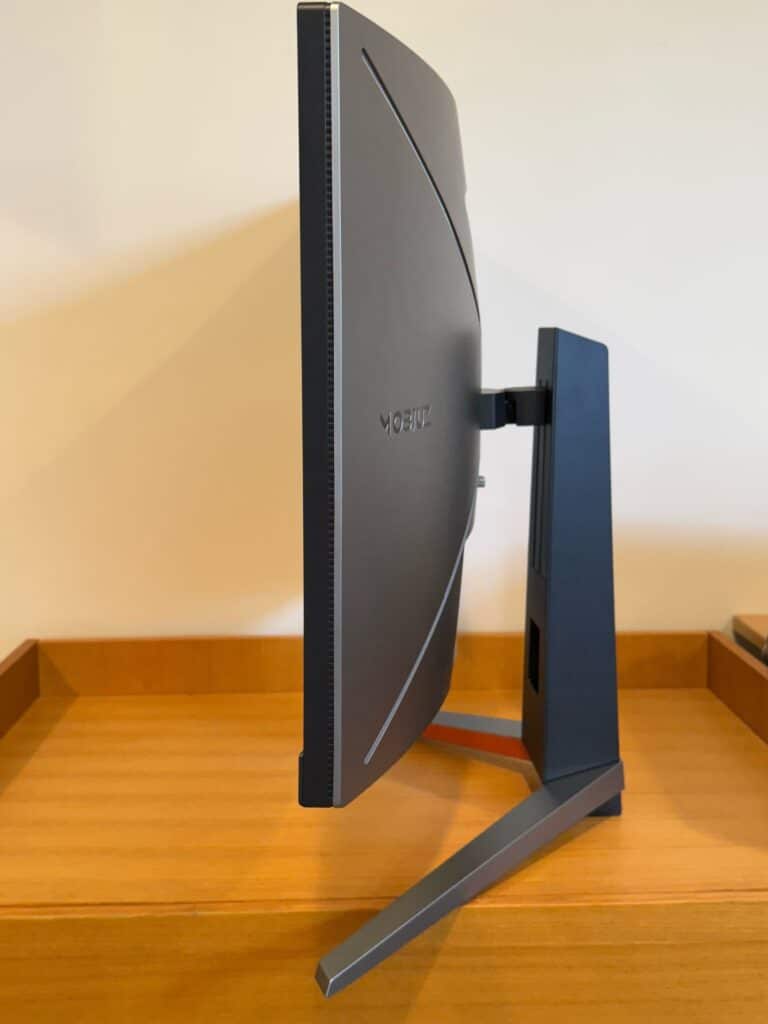 This model is larger than your typical desktop screen, so some preparation will be necessary before you buy it. It’s a bit heavier than most at 21.4 pounds compared to similar offerings, so extra care to not get outbalanced while carrying it is necessary. The screen’s width and depth can offset your other peripherals, so you might need a bigger desk after the upgrade.

The monitor is extremely well made just like every BenQ monitor we’ve handled through the years. The plastics are thick and strong enough to prevent flexing and cracking, plus there were no cosmetic defects on any of its parts. The stand is firm and stable so the large screen won’t sag or shake while you are enjoying a session. 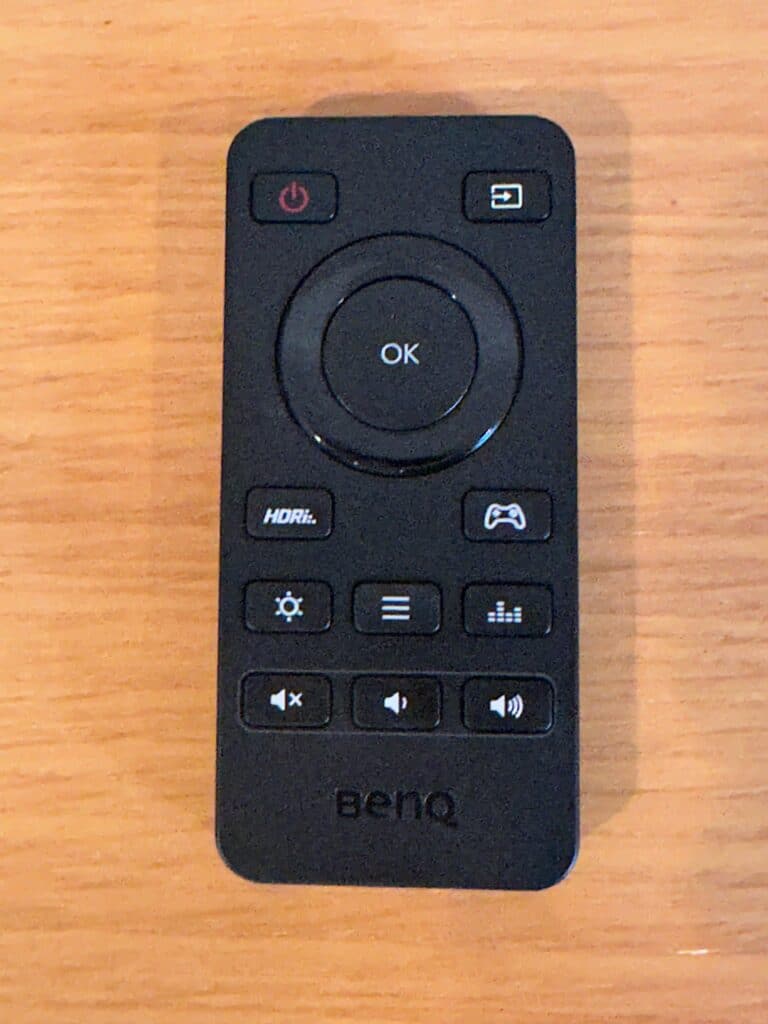 The BenQ Mobiuz EX3210R has an OSD joystick for your convenience, but it also includes a dedicated remote in the package. This combination is a nice touch since it makes tweaking and utilizing the monitor’s features easier and quicker. Some offerings include software compatibility, but that’s not necessary for this option.

The stand included with the package offers tilt, swivel, and height adjustments for your convenience. You can’t pivot the display, but that’s okay since curved monitors were not meant to be used as portrait screens. You can use VESA mounts, but they are only necessary for select instances such as when the user has multiple monitors.

Its connectivity layout is pretty standard compared to other offerings, so it doesn’t get additional points for it. It has a DisplayPort 1.4 slot and two HDMI 2.0 ports, along with two usable USB 3.0 connectors and a 3.5mm jack. We’d like to see USB-C on it, but it seems that it is still reserved for the brand’s prosumer offerings.

One thing where the BenQ Mobiuz EX3210R beats its competitors is in the built-in speakers’ category. This model has the usual 2-watt pair, but it includes a 5-watt woofer which adds bass to its output. Its usable for both games and movies, but headsets are still better if you want to preserve the curvature’s immersive effect. 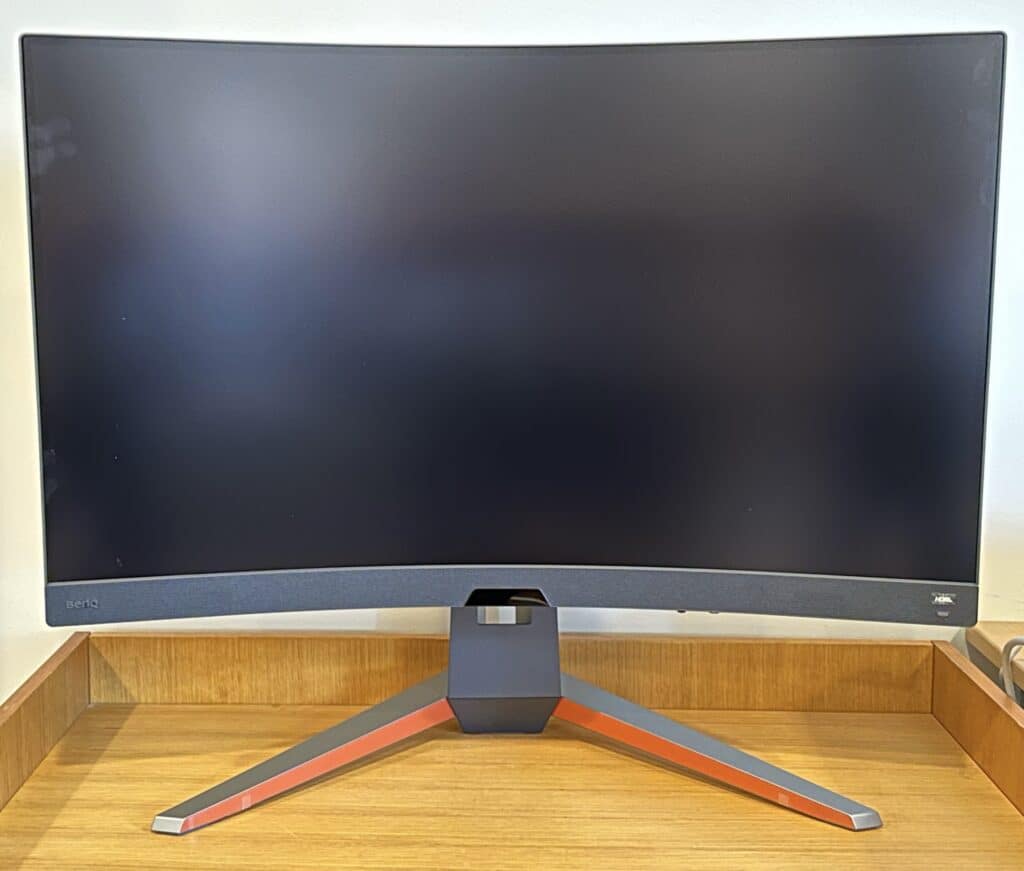 2560 x 1440 at 32 inches has almost the same pixel density as a smaller 1080p screen but remember that it has a higher pixel count. It won’t be as sharp, but images still have cleaner edges and better details. It takes more GPU horsepower to get to 165Hz at 1440p, but many modern cards are capable of that now. 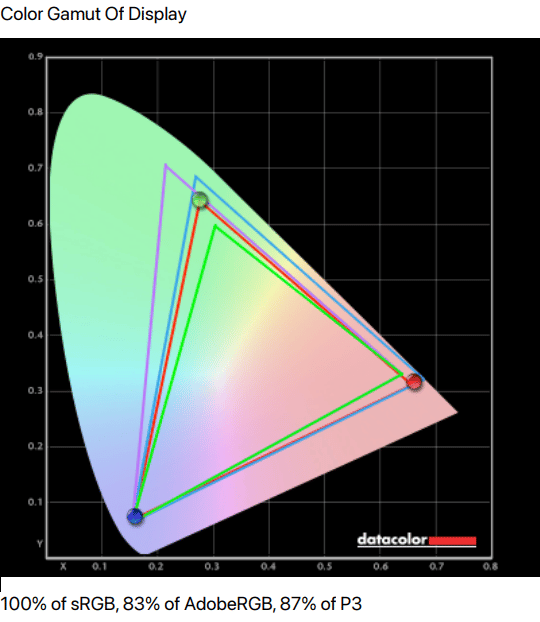 The BenQ Mobiuz EX3210R produces 100% of sRGB and 87% of DCI-P3 for decently rich colors in both games and movies. Its default accuracy isn’t perfect with a deltaE average of 2.78, but that’s not bad for a gaming display. Most users won’t even notice the errors, and some might even appreciate the extra saturation in some shades.

Calibrating it reduced the dE average to 1.03 which is considerably better than what most gaming displays can offer. Doing this makes the monitor suitable for content creation and some editing, but you will need a colorimeter to get it. However, we don’t recommend buying the gadget to calibrate it since it’s impractical for a gaming display.

Its backlight only managed 291 cd/m2 at 100% in SDR, but it peaked at 405 cd/m2 when it is HDR mode is active. Its average contrast ratio reached 2105:1 at 70% brightness, but it didn’t change a lot when it’s HDR mode was active. It’s decent in this regard, except its HDRi is limited so most wouldn’t even use it for games and movies. 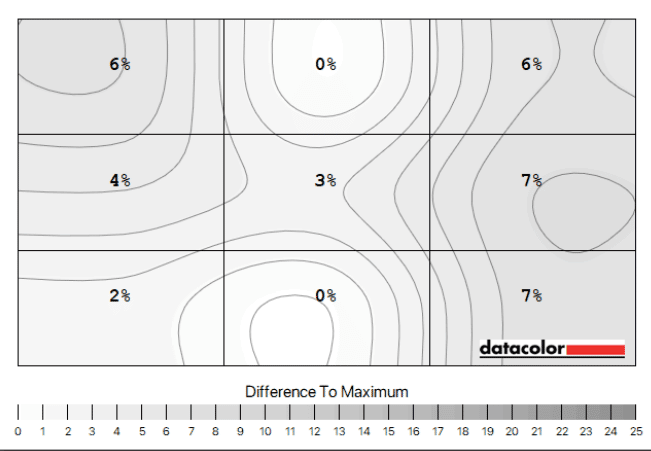 Panel uniformity for the test sample had some backlight leaks at the top and bottom edges of the screen. They added some glow-in-dark scenes, but it is mostly unnoticeable unless you focus on the affected areas. Note that this doesn’t mean that every EX3210R made will have the flaw since there are manufacturing tolerances in play.

The BenQ Mobiuz EX3210R is capable of decent pixel response time for a VA monitor. You need a bit of overdrive to minimize the trailing and smudges which happen in fast and contrasting transitions. It is expected from a VA panel, but it is acceptable compared to what we’ve seen from other offerings.

The BenQ Mobiuz EX3210R is compatible with both FreeSync and G-Sync so you don’t have to worry about tearing and stuttering. Both GPU companies have excellent 1440p cards, so it’s nice to have dual compatibility. Input lag sits at 4ms at 165Hz, so there is no need to worry about delays or sluggishness while you are enjoying your titles.

Thoughts on the BenQ Mobiuz EX3210R

The BenQ Mobiuz EX3210R is an excellent choice if you want an immersive gaming monitor with premium build quality and decent pricing. It is built like a tank and it performs quite well in almost every imaging metric that matters. We also like that it includes a dedicated remote and some gentle RGB lighting.

However, we’d love to see other functional features like USB-C instead of more gamer-centric extras. Its contrast and HDR performance leave something to be desired, although that’s understandable. But overall, the BenQ Mobiuz EX3210R is still an excellent choice for immersive gaming, especially at its current price range.

Search
You are here: Home / Reviews / BenQ Mobiuz EX3210R Review – Premium 32-Inch Curved Monitor for Immersive Gaming – Highly Recommended
This website uses cookies to improve your experience. We'll assume you're ok with this, but you can opt-out if you wish.Accept Read More
Privacy & Cookies Policy