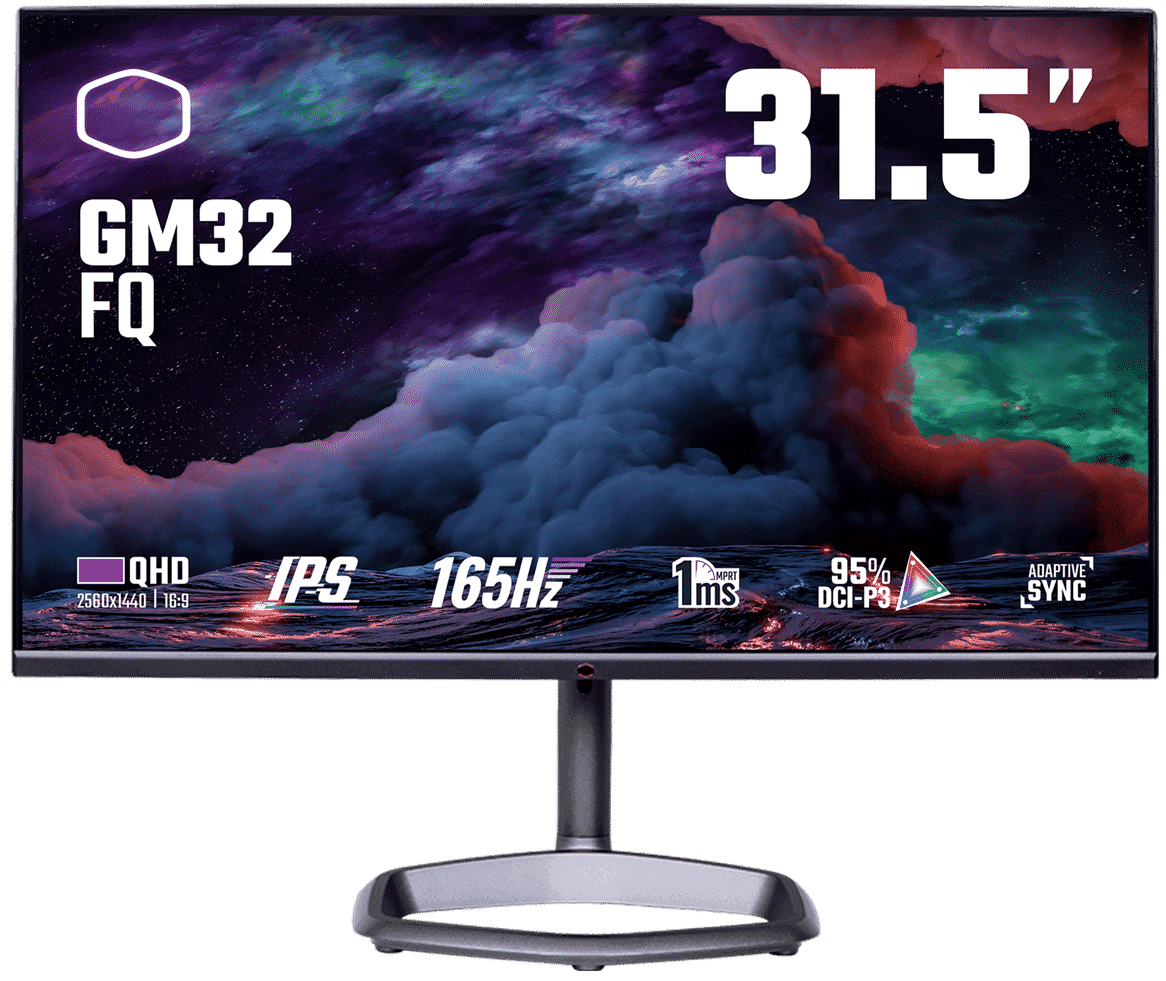 The Cooler Master GM32-FQ was designed to satisfy the requirements of both gamers and creators by offering a fast and vibrant screen. It’s the latest attempt from the brand to become competitive in the gaming display market, continuing where models like the GM34-CW left off. Let’s take a closer look at the $500- Cooler Master GM32-FQ to see if it’s worth a shot versus its already popular competitors. 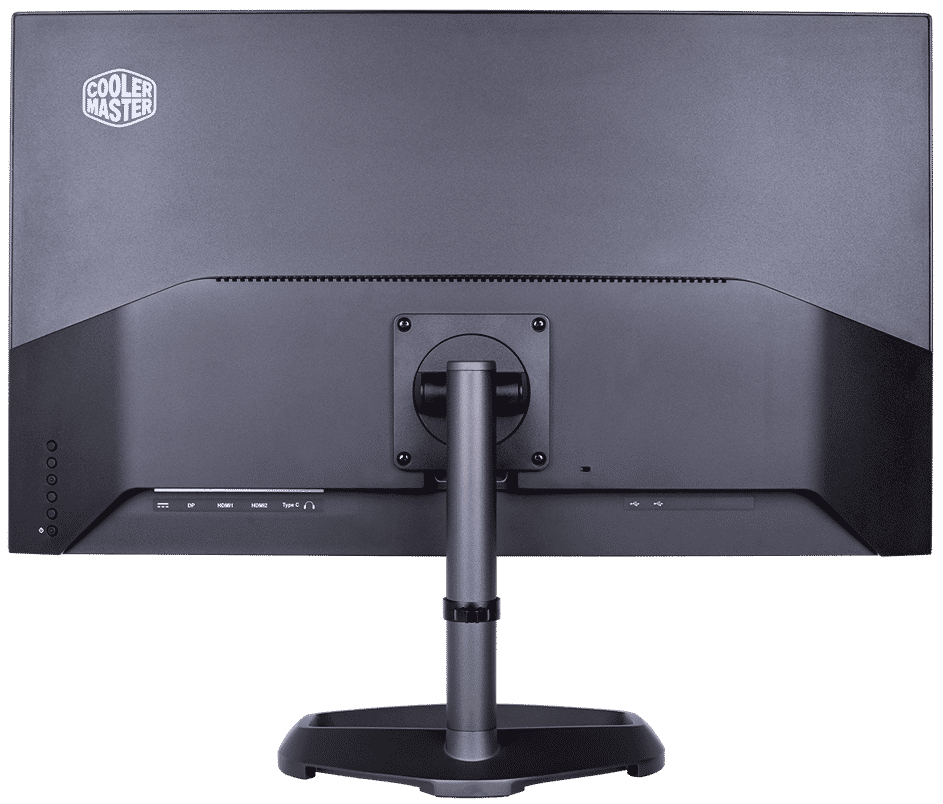 The Cooler Master GM32-FQ looks just like any other modern monitor except its base which is finished in the shape of the brand’s logo. The monitor has a matte black chassis which is accented by the stand’s gunmetal finish. The display is bezel-free on three sides, so it looks bigger than it already is while you are using it.

You must consider the monitor’s size when it is fully assembled since 32-inch models are no joke when it comes to the overall dimensions. The base is quite big, but the upright is positioned towards its back so you can easily place it next to a wall. The CM logo-shaped base is hollow so you can use it for small peripherals to save some space.

Its build quality is great since the stand is made of metal unlike many of its competitors that have plastic versions. The monitor’s attachment point sits low at the back so there is some slight wobble, but it only happens if you nudge the screen. However, its firm enough so the screen won’t shake or sag unwantedly while you are gaming.

It is disappointing that the Cooler Master GM32-FQ has buttons for its OSD instead of a more convenient joystick. The layout is located at the back near the right-hand side when facing the monitor, so it’s fairly accessible. The power button also has a pimple so you’ll know what it is for, but we still feel that it should include a joystick.

The stand included in the package offers tilt, swivel, pivot, and height adjustments for your convenience. It is easy to get a comfortable viewing angle even if the display sits a bit short compared to similar offerings. You can use VESA mounts, but it’s only necessary if desk space is limited or if you have multiple screens. 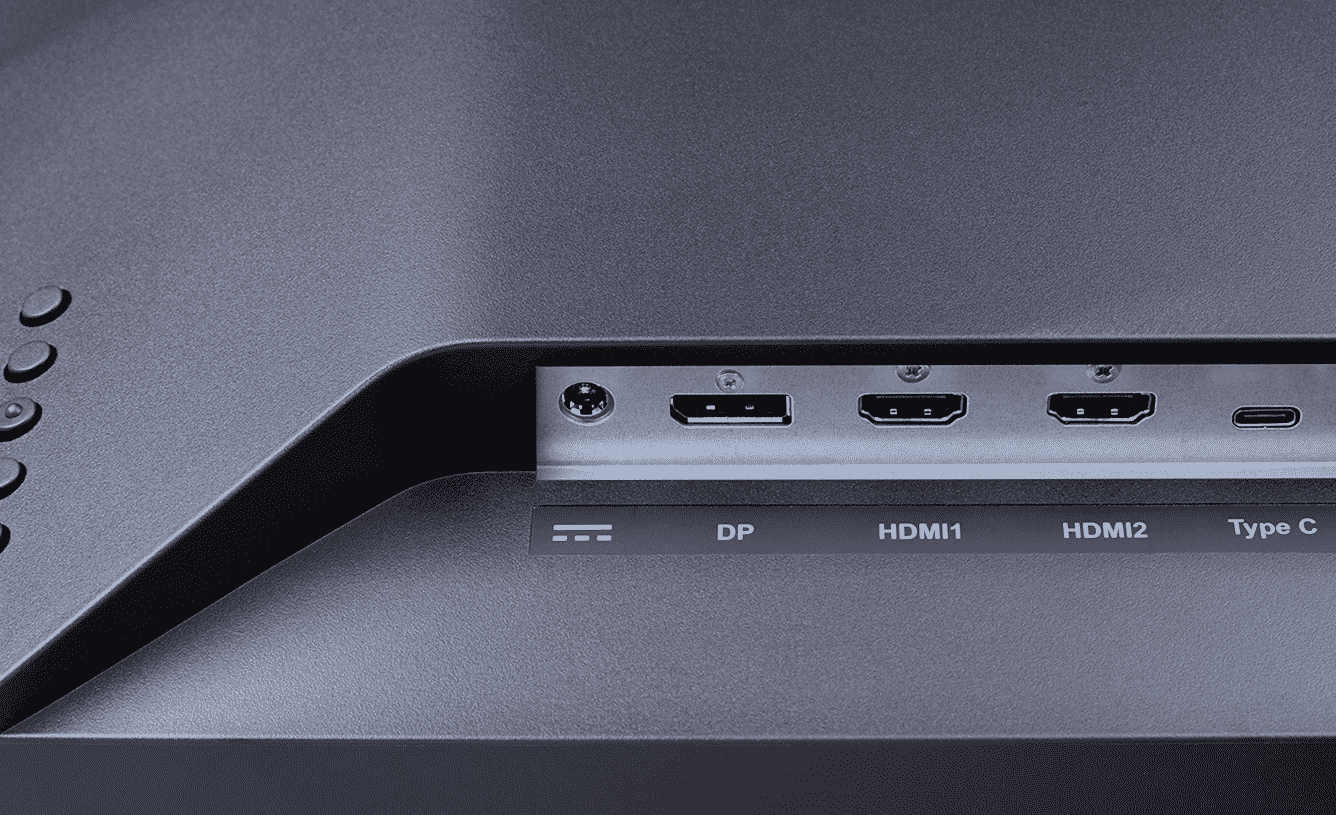 Another design feature we love about the Cooler Master GM32-FQ is its connectivity layout which includes everything you will need. It has a standard DisplayPort slot and two HDMI 2.0 ports, along with a USB-C connector for the latest laptops. You also get two USB 3.0 slots and a type B port for upstreaming on the opposite side of the input ports.

It also includes speakers in the chassis, but they only offer two watts of power per channel. They sound tinny and are incapable of bass, so most won’t find them suitable for gaming or watching movies. It is always nice to have extra features like this, but we think it is about time that manufacturers upgrade this overlooked aspect of their display products.

The Cooler Master GM32-FQ boasts a 32-inch IPS panel with a 2560 x 1440 resolution, a 165Hz refresh rate, and a 1ms boosted response time. The backlight has a 400 cd/m2 peak output while the contrast ratio is listed at 1200:1. This model is HDR 400 certified, but the HDR effects that come out of that has always been rather limited.

1440p monitors are popular because they offer the sweet spot between sharpness and visibility. It is not as crisp as the more common 27-inch variants, but you still get a higher pixel count compared to a 1080p display. It’s easy on the eyes for reading and browsing while games look more detailed, although your framerates will drop if you are coming from a 1080p setup.

The Cooler Master GM32-FQ’s IPS panel renders more than 100% sRGB and 94% DCI-P3 for stunning colors in games and movies. it has an impressive deltaE average of only 1.27 using the stock settings, so most users won’t need to calibrate it. The screen looks good and balanced out of the box, so you only need to set a comfortable brightness level before using it.

Calibrating the monitor improved its dE average to 0.89 which is excellent for a gaming variant. This makes it suitable for color-critical work, but the downside is you need a colorimeter to get this kind of improvement. Copying settings from reviews don’t guarantee the same results and colorimeters are expensive so it’s only practical if you need the monitor for editing or content creation.

The Cooler Master GM32-FQ’s backlight reached 415 cd/m2 at 100% while its contrast peaked at 1191:1 at 50% brightness. It can fight off glare, but it is not capable of deep blacks like VA, OLEDs, or FALD-equipped IPS variants. That also means its HDR performance is limited, and you have to go a few tiers higher if you want a better experience in this regard.

Its panel uniformity wasn’t great since there were backlight leaks and clouding issues on the top edge of the screen. These defects show up more in dark scenes, but they are less noticeable otherwise. Note that not all GM32-FQs have this issue since IPS panels are not made equal, so it is entirely possible to get a better unit.

The biggest weakness we saw on this model is its pixel response time which seemed slower than similar offerings. The monitor has multiple levels of overdrive, but on the maximum which adds a bit of overshoot worked to clean up some of the smudges. This makes it less suitable for the most meticulous competitive gamers, but it shouldn’t be a deal-breaker for most.

The Cooler Master GM32-FQ is compatible with both FreeSync and G-Sync so you won’t have to lose out on VRR functionality. GPUs from both brands aren’t easy to come by nowadays, so dual compatibility is handy in case you can’t get your preferred card at the right price and time. Input lag sits at 4ms at 165Hz, so there is no need to worry about delays while enjoying your favorite titles.

Thoughts on the Cooler Master GM32-FQ

The Cooler Master GM32-FQ is a decent choice if you want a vibrant and accurate IPS monitor for work and play. It has all the right features which are necessary for this year’s market such as USB-C connectivity. We like its build quality and price since it shows improvement over Cooler Master’s first attempts.

The glaring issue with the Cooler Master GM32-FQ is its slower pixel response time versus competitors like the Gigabyte M32Q. its also lagging behind in some of its specifics such as its use of dated OSD buttons and the lack of high wattage for charging from its USB-C slot. It’s a great gaming monitor, but it’s clearly not the best bang for your buck out there.

Search
You are here: Home / Reviews / Cooler Master GM32-FQ Review – 32-inch 1440p 165Hz Monitor for Gamers and Creators
This website uses cookies to improve your experience. We'll assume you're ok with this, but you can opt-out if you wish.Accept Read More
Privacy & Cookies Policy