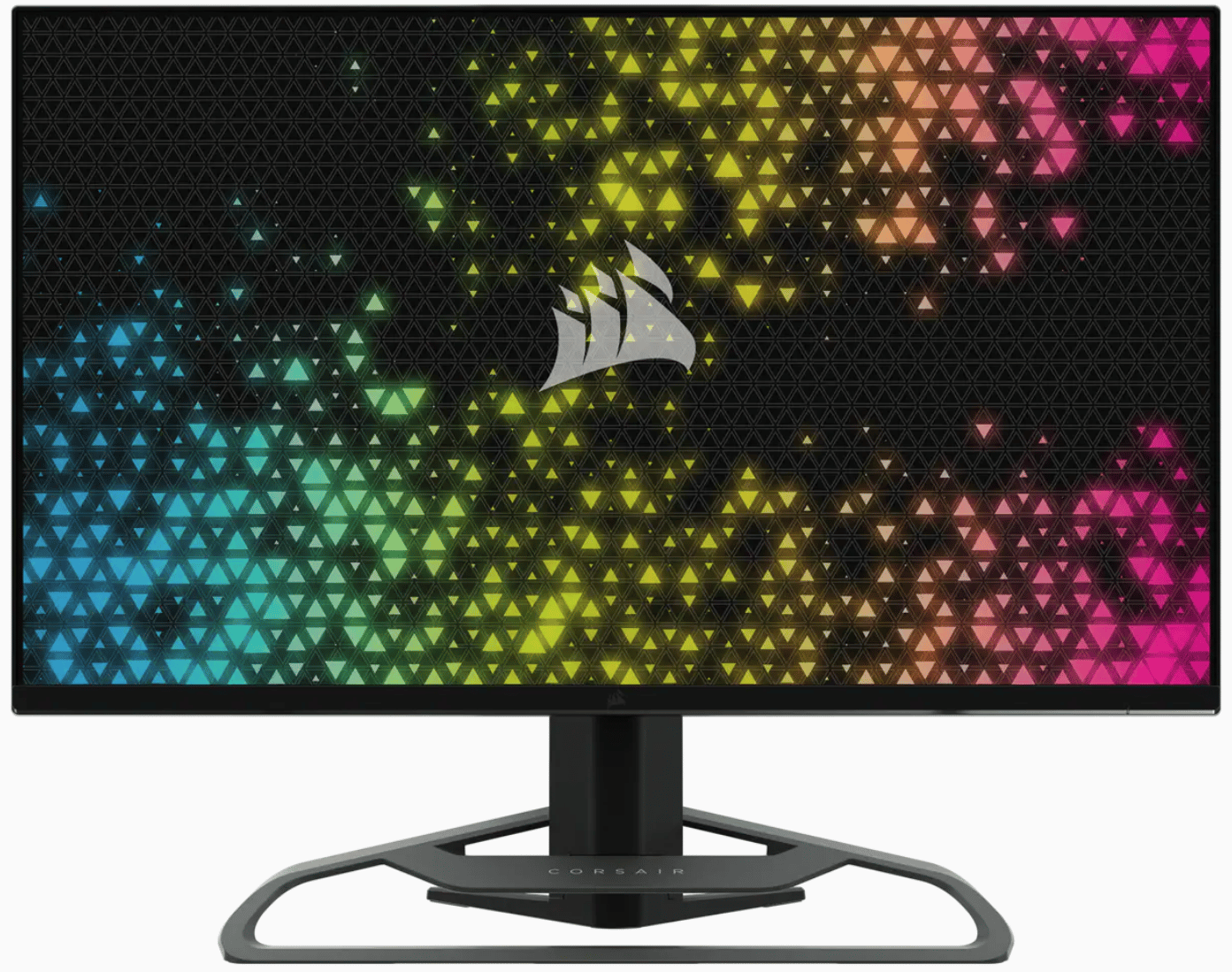 The Corsair Xeneon 32UHD144 aims to compete in the volatile sub-$1000 bracket of the 4K 144Hz monitor category. It offers essential specifications like HDMI 2.1, but it has a noticeable aesthetic twist that’s unique to the brand. Let’s see how Corsair’s second monitor fares in a contested category to know if it should be your next gaming monitor upgrade. 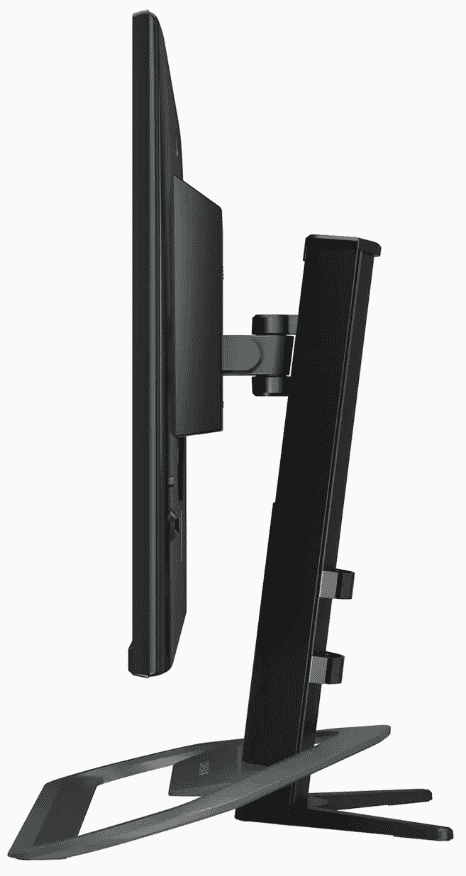 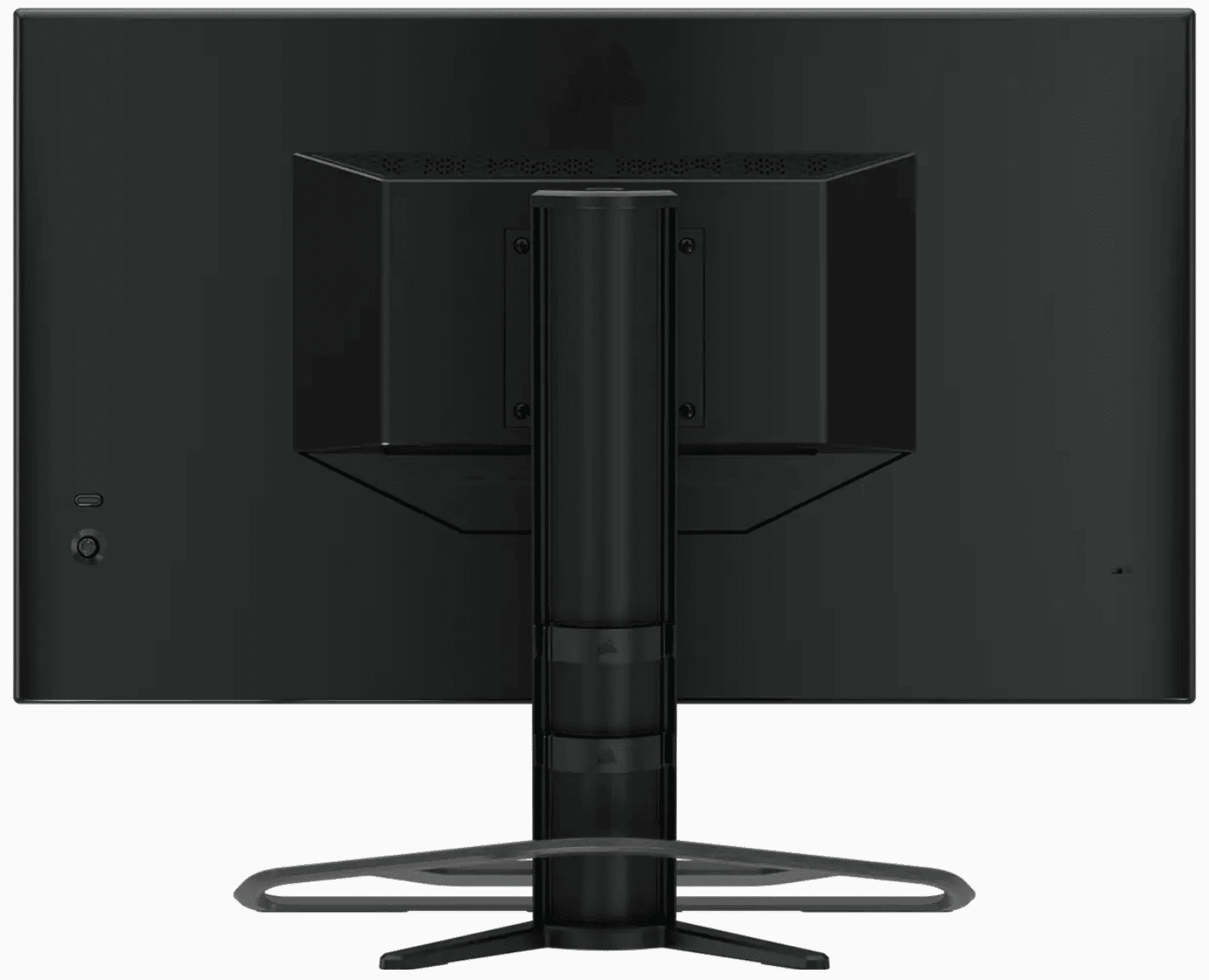 The Corsair Xeneon 32UHD144 follows the aesthetic of the 32QHD165, but with a few minor tweaks that some may either like or dislike. The monitor has a matte black chassis and a gunmetal stand so it doesn’t look too flashy or gamer-centric. The display is bezel-free on three sides, but it still has inner borders which you will notice if you look close enough.

It is worth mentioning that the monitor doesn’t have RGB lighting anymore, and that can be either good or bad. One of the big draws in getting a Corsair product is its exclusive RGB ecosystem for those who already have equipment or components from the company. However, we know many think that RGB on monitors is a useless feature since it can be distracting and can sometimes raise the price.

It’s a large display, so you might want to check your free desk space first before upgrading to this monitor. It needs over a foot of depth and it’s almost as wide as an ultrawide monitor so it might displace some of your existing peripherals. extra care will be necessary since the monitor is quite heavy so it’s not impossible to get out of balance while carrying it.

The brand isn’t new when it comes to build quality, so you can expect the same for its second monitor. The plastics used are thick and sturdy, and we did not see any cosmetic defects when it was unboxed. The included stand is only for the looks since it’s stable and firm enough to keep the screen from wobbling or sagging.

The Corsair Xeneon 32UHD144 has an OSD joystick for easy access to its controls and features. It’s located at the back near the right-hand side so you can reach for it easily. Similarly priced competitors like the BenQ EX3210U have a dedicated remote, but that’s mostly unnecessary unless you plan to use the display for couch gaming. 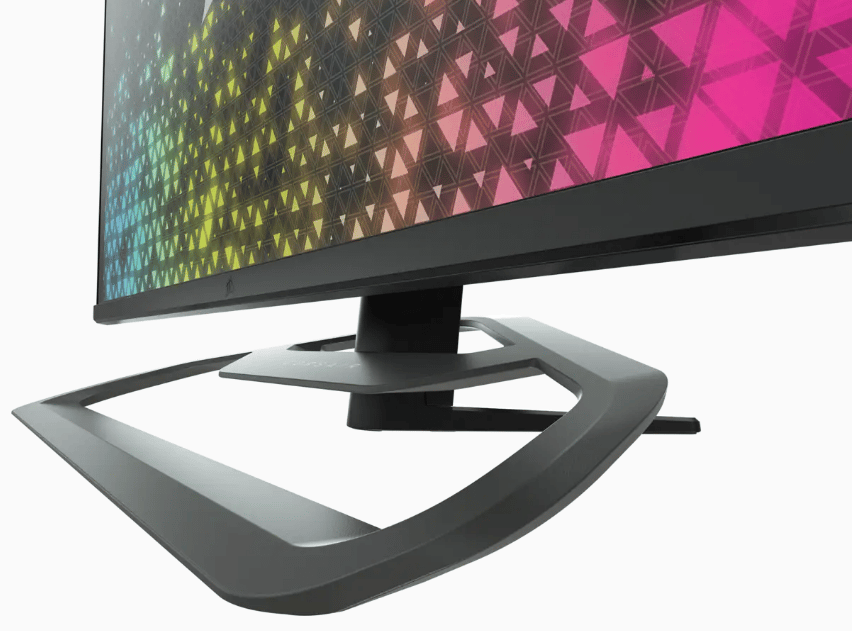 The stand included with the package offers tilt, swivel, and height adjustments for your convenience and comfort. Pivoting wasn’t included since the monitor was not designed to be a secondary portrait display, so we think that it is forgivable. You can still use VESA mounts, but that adds cost, and you will lose the base that also doubles as a base or paddock for your controllers.

The Corsair Xeneon 32UHD144’s connectivity layout gets upgraded with the latest standards for a fuller gaming experience. It offers DisplayPort 1.4 DSC for PCs and two HDMI 2.1 ports for 4K 120Hz operation with the latest consoles. It also has USB-C slots, but one is for data upstream to support the USB-A ports while the other is compatible with DP Alt Mode with 15 Watts of power.

It has a 3.5mm jack, but it doesn’t include built-in speakers like many of its competitors and its QHD sibling. We think that’s a downgrade at this price range even if you are better off with a desktop set or gaming headsets.

The Corsair Xeneon 32UHD144 sports a 32-inch IPS panel with a 3840 x 2160 resolution, a 144Hz refresh rate, and a 1ms boosted response time. The backlight has a 400 cd/m2 typical brightness and a 600 cd/m2 peak while the contrast is listed at 1000:1 like most IPS panels. This model is HDR 600-certified, so it has local dimming zones and presumably better HDR performance.

4K is much more comfortable when viewed on a 32-inch screen versus the more common 27-inch variants. Its easier on the eyes when it comes to reading or processing documents since small objects like letters do not become sharp. But on the other hand, games and movies look cleaner and crisper even if the pixel density is slightly looser than the 27-inch models.

The Corsair Xeneon 32UHD144 renders more than 100% sRGB and 98% DCI-P3 for stunning colors in games and movies. It doesn’t need calibration right away since its deltaE average is only at 2.71 so most gamers can use it right away. It doesn’t look neutral or balanced, but gamers will enjoy the extra vibrancy and punchy hues.

Calibrating it reduced the dE average to 1.14 which is excellent for a gaming display with rich saturation. It’s not as accurate as the 4K 144Hz options out there, but we think that it will still be usable for some editing work and content creation. The downside is that you need a colorimeter to achieve this, and those don’t come cheap and are impractical for gaming purposes.

Its backlight reached 433 cd/m2 in SDR and peaked at 621 cd/m2 when it is HDR mode is active. Its SDR contrast only got to 944:1 at 50% brightness but it increased exponentially when its local dimming worked. It’s capable of better HDR performance, but there can be light blooms at times since the zones are limited.

Panel uniformity for the test sample did not show any major issues like backlight leaks or clouding. However, it did show some halos in dark scenes when the backlight is working its magic since the limited zones cannot provide granular control like a mini LED unit. This can still change with every monitor in the product line due to tolerances, so there are worse units out there.

The Corsair Xeneon 32UHD144  has excellent pixel response times since it has a fast IPS panel, a 144Hz refresh rate, and a unique variable overdrive. It can still show some trails and smudges in some scenes, but they are barely noticeable most of the time. It works great for competitive play or games with fast-paced transitions like simulators.

The Corsair Xeneon 32UHD144  is compatible with both FreeSync and G-Sync so you don’t have to worry about tearing and stuttering. It is essential to have both now so you don’t get locked to one GPU brand when the time to upgrade arrives. Input lag sits at 4ms at 144Hz, so there is no need to worry about delays while gaming.

Thoughts on the Corsair Xeneon 32UHD144

The Corsair Xeneon 32UHD144 is a great gaming monitor with a unique design and all the right capabilities. It is great for both PC and console gaming, and it can even be used with a USB-C laptop from work. Its panel is capable of great color coverage and visuals and it has decent HDR performance to improve your gaming experience.

However, the Corsair Xeneon 32UHD144 isn’t priced to compete since it’s priced higher than other options like the Aorus FI32U. It has that HDR 600 feature, but many would rather spend more and go for the full HDR experience if that’s what they were after. This is a superb option, but we recommend catching it at a discount to make it worth it.