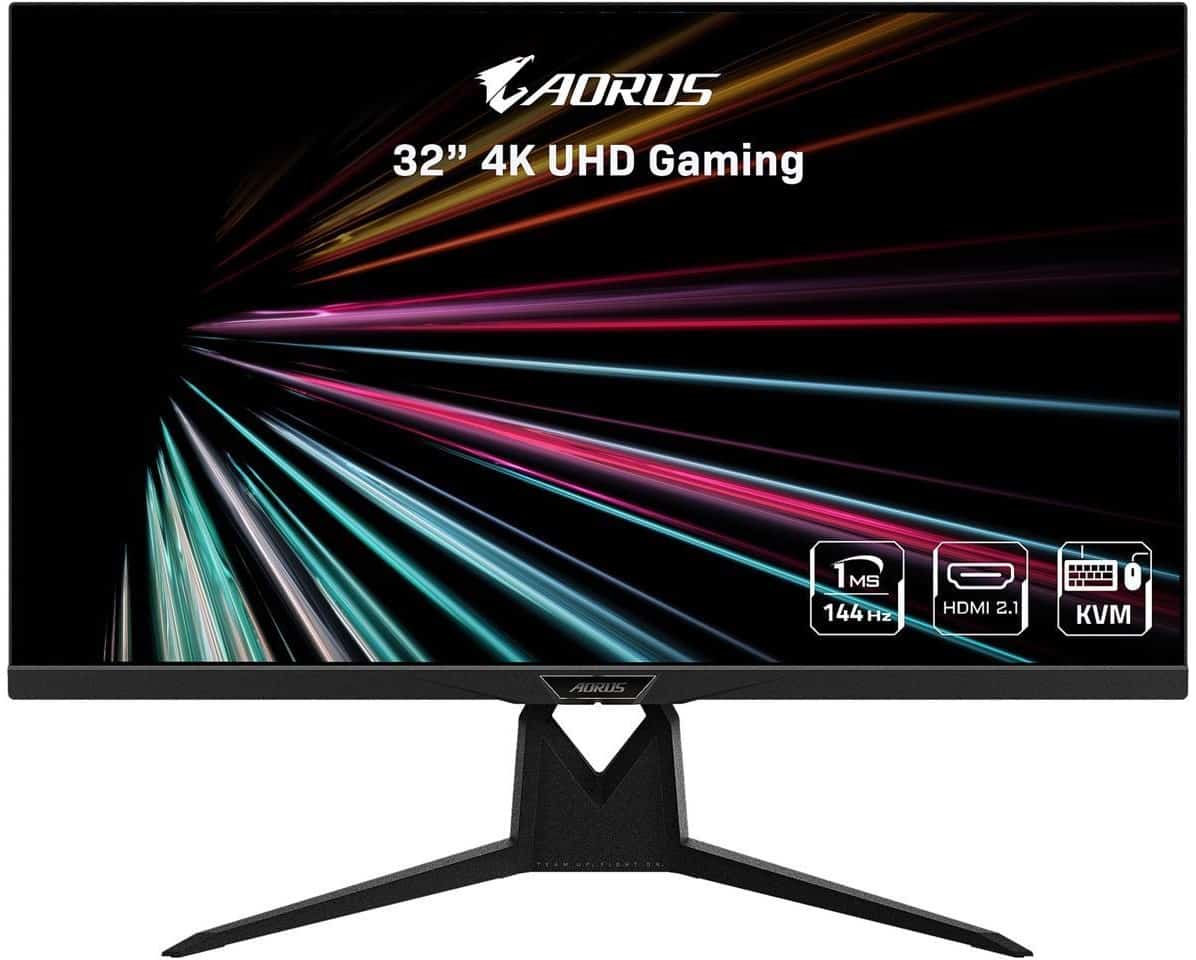 The Aorus FI32U is a bigger and meaner version of the M28U, which offers 4K 144Hz and HDMI 2.1 for beastly PCs, the PS5, and the Xbox Series X. Its size is more suited for 4K than its smaller sibling, making it more attractive for all types of gamers who want a more convincing experience. Of course, the price is higher, but let’s go and see if the Aorus FI32U is worth its price tag. 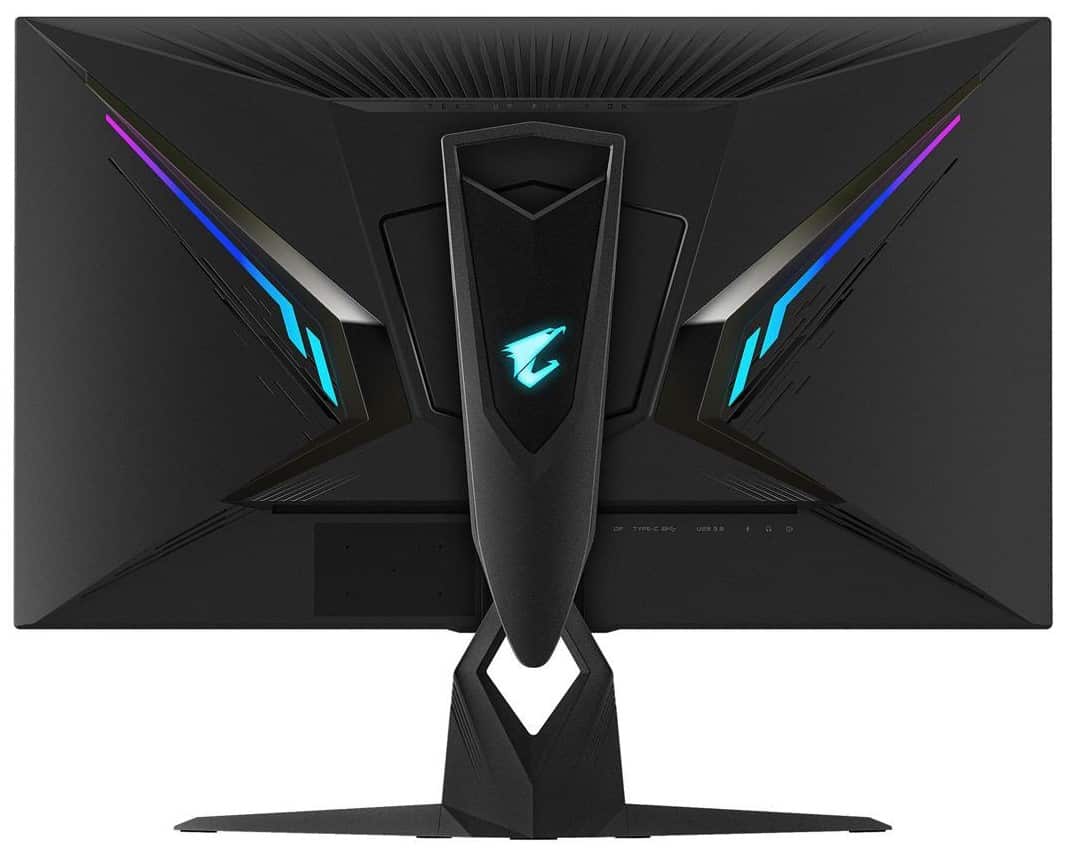 The Aorus FI32U looks exactly like a larger FI27Q-X, although there is a big difference when it comes to their specs. The monitor has a clean, matte black chassis with aggressive aesthetics at the back and on its stand. The display is bezel-free on three sides so the screen appears bigger than it really is even if there are inner borders.

its aspect ratio isn’t anything crazy, but this monitor manages to take up a lot of space compared to typical variants. It needs almost a foot of depth on your desk while its width could interfere with bookshelf speakers if your desk isn’t wide enough. It is quite heavy at 24.03 pounds, but that can only mean that it’s stable and durable, unlike many large monitors.

build quality for the Aorus FI32U is excellent since it is built like a tank with premium materials just like its predecessors. The plastic panels on the chassis are thick and sturdy, and there are no cosmetic defects on any of the monitor’s parts. The stand is made of metal so it secures the monitor and doesn’t let it wobble even if you type heavily.

The Aorus FI32U also has RGB lighting at the back that is shaped like wings or chevrons like many of the brand’s products. They have a decent glow that can provide bias lighting for night gaming, so they have some use even if you don’t view your monitor’s rear. They also sync with the brand’s RGB Fusion ecosystem so you can create themed lighting if you already have other Aorus gear.

The Aorus FI32U has an OSD joystick neatly tucked under the brand logo on the bottom bezel. It’s easier to reach and you don’t have to feel around for it since it is close to the power LED as well. The monitor is also compatible with the brand’s OSD Sidekick app for even better access to its features.

The stand included with the Aorus FI32U offers tilt, swivel, pivot, and height adjustments for your convenience. Its also made of metal which is a nice touch while providing stable footing for the large screen. You can swap this part out with a VESA mount, but that’s only necessary if your desk space is limited or if you have multiple screens.

The Aorus FI32U has DisplayPort 1.4 DSC for PC and two HDMI 2.1 ports for the Xbox One Series X or the PS5. You also get a USB-C port for modern laptops, three USB 3.0 ports, and two 3.5mm jacks for audio passthrough. This model has the brand’s ANC 2.0 feature which cleans up your headphone’s output if it is plugged in through the monitor.

It’s also quite notable that the Aorus FI32U has an ESS Sabre DAC chip built into it for even better audio performance. It works best with headphones that do not need a lot of power, but it is able to produce crisp and clear audio that’s just right for gaming. This and ANC 2.0 aren’t found anywhere else, so the product is a great pick if you care about your game’s sounds, its clarity, and its accuracy.

It doesn’t speakers, but clearly, the monitor knows that gamers often prefer headphones for better focus and immersion. Its inclusion of active noise canceling and a DAC chip proves that. However, we’d still like to get a decent pair for purposes other than gaming, especially if the price is higher than usual.

4K is arguable more suited at this size since the pixel density isn’t too tight, so legibility and visibility do not diminish. However, you still get a sharp and detailed picture since the higher pixel count is still there so games and movies will look great no matter what. These also lend some flexibility to a monitor like the FI32U since it can be used for both productivity and entertainment.

The Aorus FI32U renders 99% sRGB and around 82% DCI-P3 which isn’t the best, but decent enough for gaming purposes. Its default accuracy has a deltaE average of 2.35 which means color errors won’t be noticeable to the naked eye for most users. The screen looks balanced out of the box so most users will be happy with it after a few minor tweaks.

Calibrating the Aorus FI32U produced an impressive 0.57 dE average which makes it usable for color-critical work. You need to enlist a colorimeter to get this kind of result, but those don’t come cheap or practical, especially for gamers. We can only recommend spending the extra on it if you are going to use this monitor for professional work.

the backlight on this variant reached 336 cd/m2 in SDR but it peaked at 431 cd/m2 when HDR is active. Its contrast is unremarkable since it only reached 1058:1 in SDR and around 1104:1 when HDR is turned on. The monitor cannot produce deep blacks and its not capable of adding substantial improvements via HDR.

Panel uniformity for the Aorus FI32U was excellent since there were no considerable backlight leaks or clouding issues on its large screen. There are some variances that become slightly noticeable in dark scenes, but it is not disturbing most of the time. Take note that this aspect varies between every unit so there are better and worse units out there.

The Aorus FI32U is fantastic when it comes to pixel response time since it’s practically free from blurring and smudging by default. You don’t need to use its overdrive settings since those will induce overshoot unless you operate it at 60Hz which is unlikely. This monitor works great for all types of games, including competitive titles like COD Warzone.

It is also compatible with both FreeSync and G-Sync so Nvidia and AMD GPU users can both enjoy the benefits of VRR technology. It’s a must-have feature now so you don’t get stuck with one GPU brand when the time to upgrade arrives. Input lag sits slightly higher at 6ms, but its still quite fast so delays won’t be an issue.

Thoughts on the Aorus FI32U

The Aorus FI32U is a great pick if you want a large screen for your PC, PS5, or Xbox Series X. It’s got a balanced IPS panel with excellent speed and responsiveness, along with a few useful features like its built-in DAC and noise canceling. Its aesthetic was recycled from the other Tactical monitors, but that gorgeous metal stand and the sleek lines are always welcome.

The Aorus FI32U costs one grand even if it’s missing out on proper HDR features and other characteristics like wide gamut coverages. However, we think it is worth the price if you consider what you are getting with it. It’s a great pick for PC gaming enthusiasts and it’s a must-have for multi-platform gamers who have the next-gen consoles.

Search
You are here: Home / Reviews / Aorus FI32U Review – 4K 144Hz IPS Gaming Monitor with HDMI 2.1
This website uses cookies to improve your experience. We'll assume you're ok with this, but you can opt-out if you wish.Accept Read More
Privacy & Cookies Policy