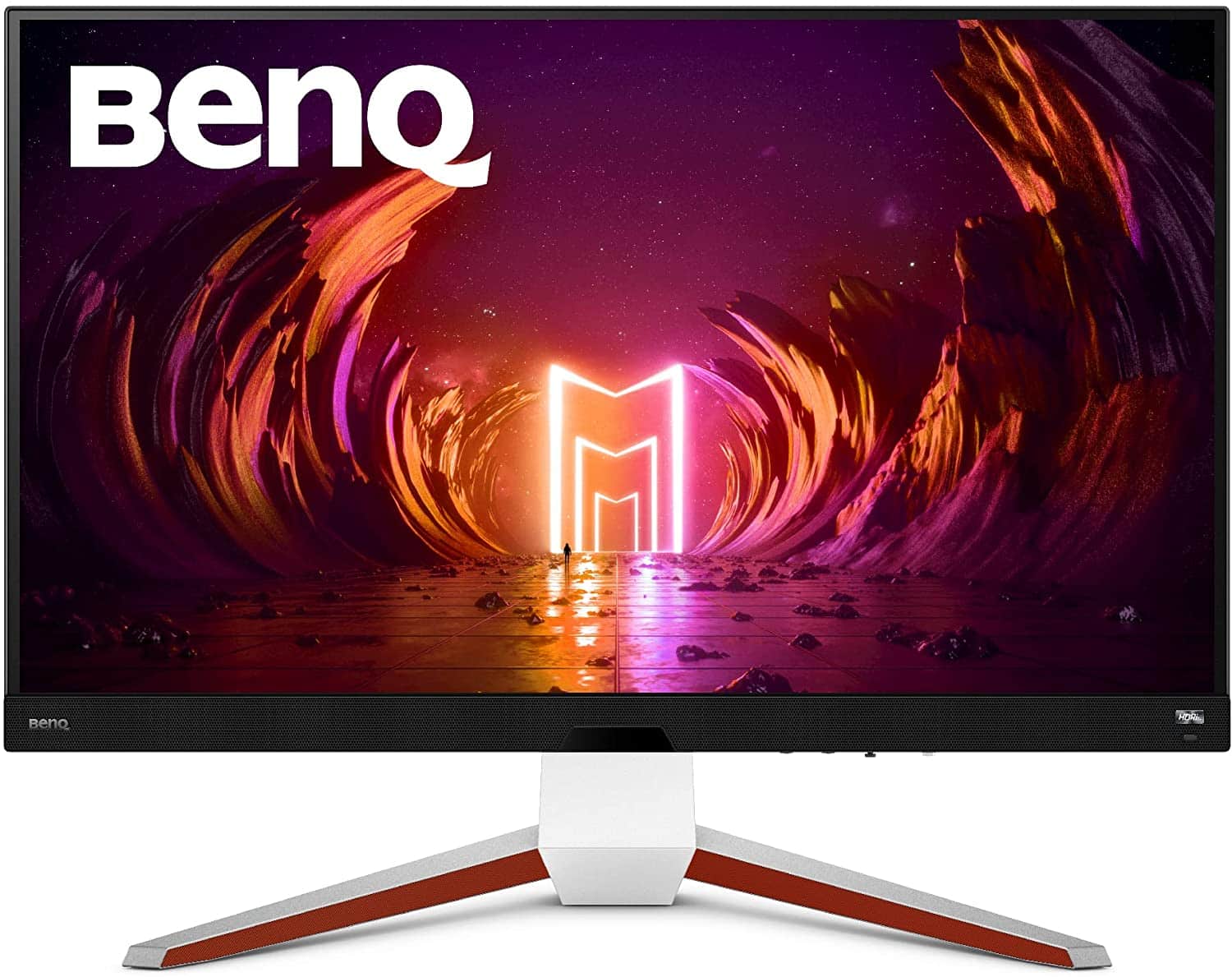 The BenQ Mobiuz EX3210U is a feature-packed 4K 144Hz monitor that’s designed for a great visual experience on PC and next-gen consoles. It has a few nice tricks up its sleeve that competitors like the Aorus M32U don’t have, but all that comes with a higher price tag. Let’s see if the BenQ Mobiuz EX3210U is indeed a good investment and worth every penny. 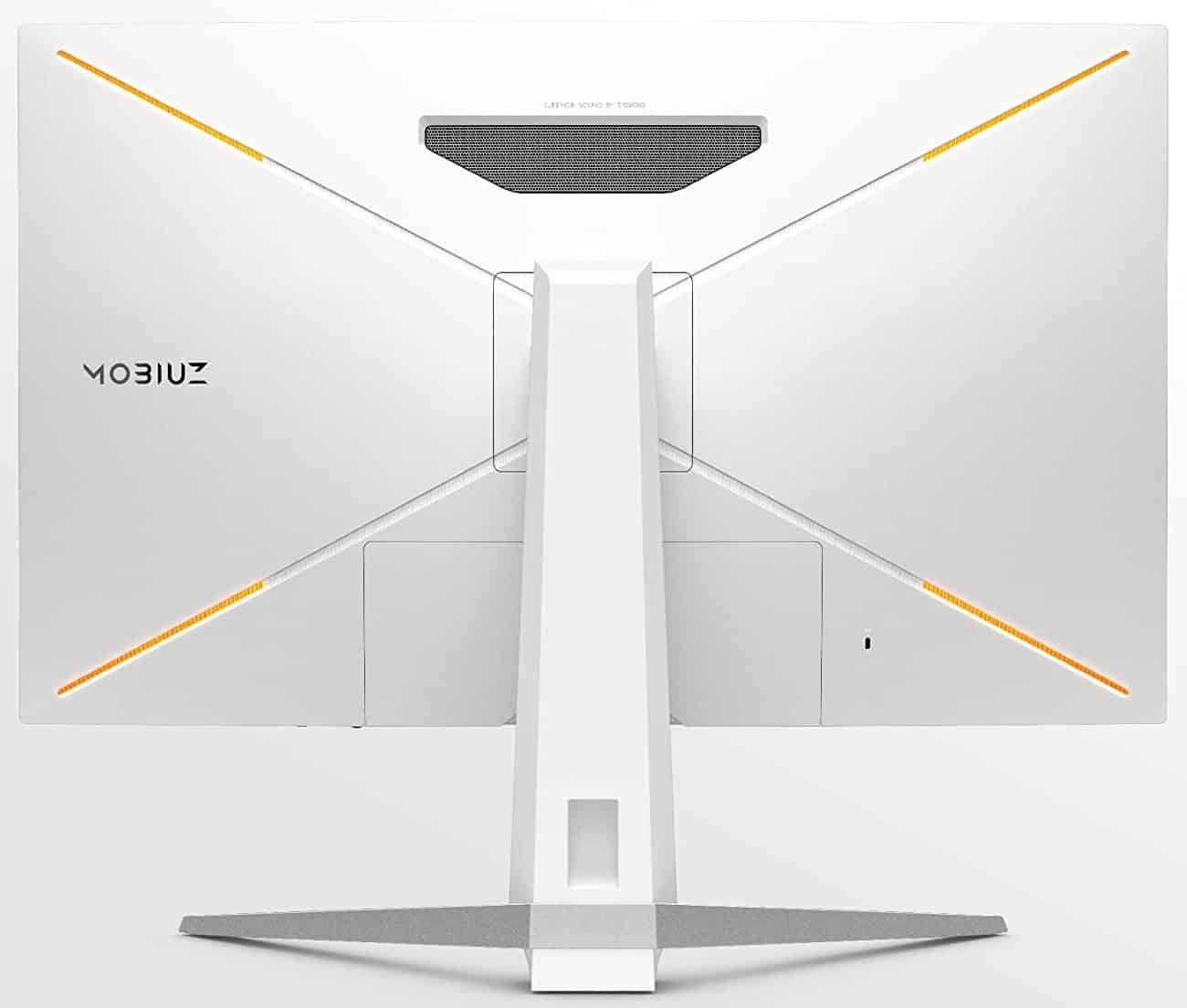 The BenQ Mobiuz EX3210U gets some upgrades in aesthetics which sets it apart from its more affordable siblings in the Mobiuz lineup. The device has a matte white and black chassis and a sliver base with red accents on the front of the legs. The display is bezel-free on three sides so it looks even bigger when you are facing it.

It’s a massive monitor, so you might have to set aside some peripherals or rearrange your setup if your desk is small. It needs two and a half feet of width while its depth reaches beyond ten inches when fully assembled. It is not the heaviest monitor out there, but it would be wise to ask for assistance when you are setting it up.

It also has RGB lighting which you don’t normally see on just about any BenQ monitor, including their flagship models. The strips are bright enough to cast a bias light if your room is dark enough and if the monitor is placed close to a wall. It also doesn’t work with existing RGB ecosystems like Asus Aura so it can only be controlled via the OSD.

BenQ always offers monitors with excellent build quality, especially with their flagship models from their sub-categories. The plastics used are thick and sturdy, and we didn’t see any cosmetic defects during unboxing. The included stand is firm and stable so the massive cabinet will not sag or shake while you are gaming.

The BenQ Mobiuz EX3210U is easy for us since it has options for controlling its features and settings. You get an OSD joystick at the bottom edge with some hotkeys, a dedicated HDRi mode button, and a remote which comes in handy for console or couch gaming. These features are handy since the monitor is designed for multiplatform use and to be flexible, so you will find yourself tinkering with its OSD often.

The stand included with the package offers tilt, swivel, and height adjustments for your convenience. Pivot wasn’t necessary since this model wasn’t meant for portrait viewing, but it is easy to get a comfortable angle that won’t strain your neck. You can use VESA mounts, but those are only necessary if space is limited or if you have multiple displays. 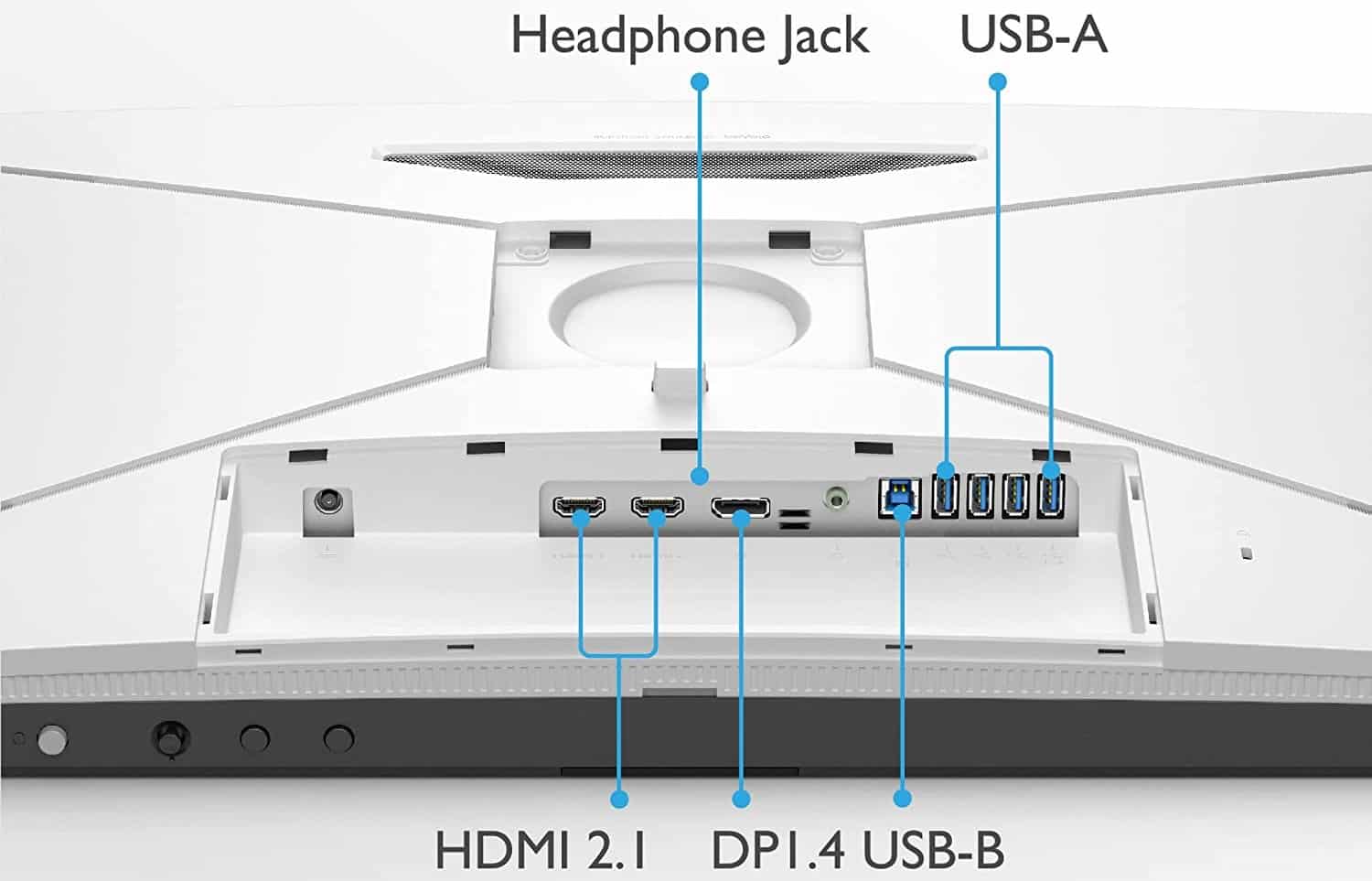 The BenQ Mobiuz EX3210U’s connectivity layout includes DisplayPort 1.4 and two HDMI 2.1 slots for 4K 144Hz on PC and 4K 120Hz for the latest consoles. There are four SB 3.0 ports as well, but what’s disappointing is the lack of a USB-C slot with DP Alt mode at this price. It would have given the product the proposition that it was more than just a gaming monitor which also helps justify its high price.

Another feature we love about this model is its TreVolo speakers which are composed of a 2-watt pair and a 5-watt woofer. They sound considerably better than most built-ins due to the bass output so it’s more suited for gaming and movies. Headsets and desktop speakers will still sound better, but it is nice to have an extra set that doesn’t sound empty or tinny.

32-inch screens are perfect for 4K desktop monitors since the pixel density it results in is just about right. It’s sharp and detailed, but legibility and visibility don’t suffer so it is still easy to read, browse, and process documents with it. You also get bigger FOVs and more room to maneuver but remember that you need a more powerful system to get high framerates.

The BenQ Mobiuz EX3210U renders more than 100% sRGB and around 97% DCI-P3 for rich colors in games and movies. Its default accuracy isn’t particularly impressive with its deltaE average of 3.15, but that’s common for wide gamut variants. Most users will still be happy with it after a few minor tweaks since the colors are rich and games will really pop.

Calibrating the BenQ Mobiuz EX3210U reduced its dE average to 1.09 which is excellent for a gaming monitor. Doing this makes it suitable for content creation and editing work, but you need a colorimeter to achieve this. Using a specific set of settings or an ICC profile doesn’t guarantee that you will get the same results since each panel is different.

The monitor’s backlight was limited to 287 cd/m2 in SDR but it peaked at 601 cd/m2 when it is HDR mode is active. It helps details come out more, but the lack of a FALD backlight is apparent since clouding can happen around the highlighted objects. However, there is an overall image improvement here compared to an HDR 400 or HDRi model, so it’s worth considering.

Panel uniformity for the BenQ Mobiuz EX3210U sample was great since there were no considerable light leaks or clouding issues. There is a variance in the backlight’s spread from top to bottom, but it’s barely noticeable while gaming. Note that this could vary between every monitor due to tolerances and the nature of IPS, so there are better and worse units out there.

This model doesn’t have issues with pixel response times just like the other Fast IPS monitors in the market. Some minimal blurring can still happen in, but you can use its trace-free setting moderately or the monitor’s strobing mode. However, the former should be enough in most cases since some are sensitive to backlight strobing.

The BenQ Mobiuz EX3210U is compatible with both FreeSync and G-Sync so you don’t have to worry about tearing and stuttering. This comes in handy now since specific 4K 144Hz-capable GPUs from either brand are either overpriced or out of stock, so you might be stuck with one or another. Input lag sits at 4ms at 144Hz, so there is no need to worry about delays while gaming.

Thoughts on the BenQ Mobiuz EX3210U

The BenQ Mobiuz EX3210U is an excellent gaming monitor just like many of the brand’s best-selling offerings. Its 4K 144Hz screen works offer rich colors and decent HDR performance even if its color accuracy is slightly off. We love the overall aesthetic and functionality of the monitor which makes it a good investment if you game on multiple platforms.

However, the biggest thing that’s going against it is its higher price which is at least $200 more than the competition. It is lacking a few niche features like USB-C to make up for that and to complete its flexibility which will make the higher cost easier to swallow. It’s still worth the price, but it needs to be competitive because the 4K 144Hz segment with HDMI 2.1 is rapidly becoming crowded.

Search
You are here: Home / Reviews / BenQ Mobiuz EX3210U Review – Premium 4K 144Hz Gaming Monitor with HDMI 2.1 – Recommended
This website uses cookies to improve your experience. We'll assume you're ok with this, but you can opt-out if you wish.Accept Read More
Privacy & Cookies Policy