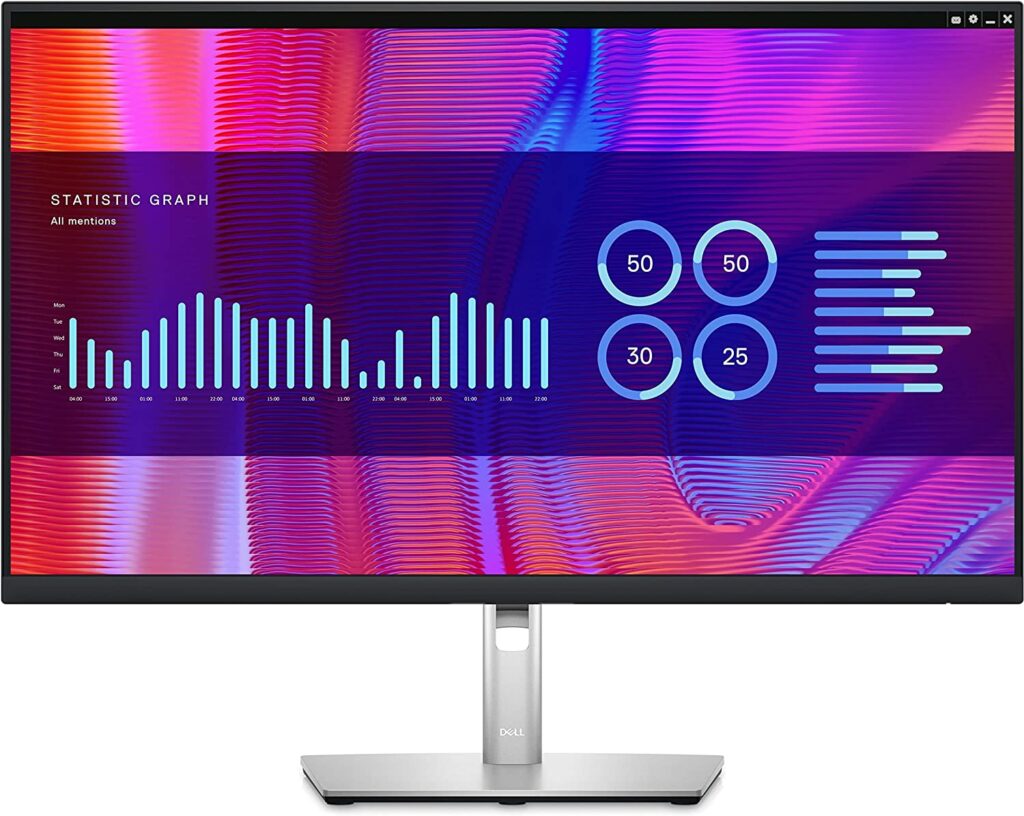 The Dell P2723DE is a high-end business monitor with modern features that make it a desirable upgrade for your work setup. It has a modernized connectivity layout and a vibrant screen that’s pleasing to look at for hours on end. The Dell P2723DE is quite pricey, so let’s check it out to know if it’s a good investment or just another fancy offering. 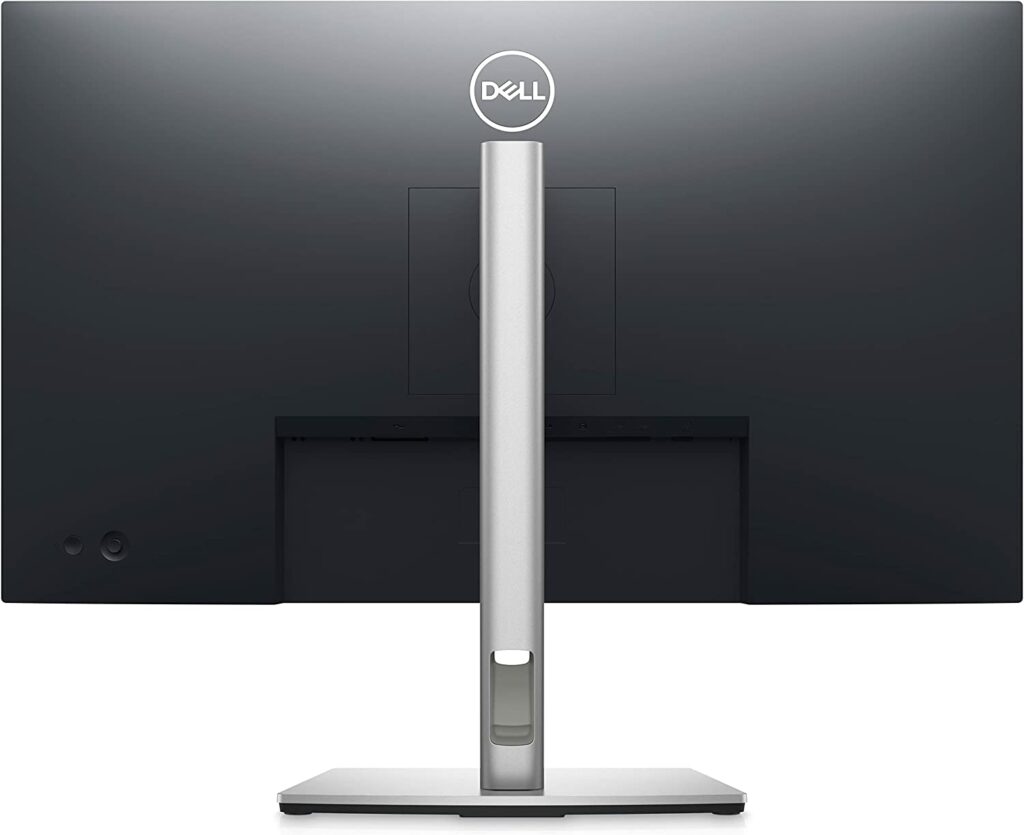 The Dell P2723DE sports the same sophisticated aesthetic as the P3223DE we reviewed earlier, except that it is smaller. The monitor’s black and silver aesthetic works well for any environment or setup, plus it’s easy to clean and maintain. The display is bezel-free on three sides, but you still have panel borders just like any other LED or LCD display.

It is not a big monitor, but it’s also a good thing that Dell has reduced its footprint to make it friendlier to the environment. Its base has become considerably smaller than what the older models have so the whole device only needs 7.5 inches of depth from your desk. Its also become much lighter at 16.8 pounds, but that doesn’t mean that it feels cheap in any way.

Build quality is great and the monitor feels like it is worth the money if we’re only talking about its physical characteristics. The plastic panels used are thick and sturdy, and each one is perfectly molded so there are no defects. The included stand is firm and stable so the screen won’t slouch or wobble while you are busy working.

The Dell P2723DE has an OSD joystick for easy access to its features and settings. Its at the back near the right-hand side so you don’t have to reach in too deep to get to it. There’s also the company’s Display Manager app which lets you use its features seamlessly. Frankly, more than what’s needed so fancy gadgets like remotes aren’t necessary.

The stand included offers tilt, swivel, pivot, and height adjustments for your comfort and convenience. Its easier on your posture and it’s good enough to be retained so you don’t have to spend more cash. It’s VESA compatible if needed but buying the arm will only become necessary in circumstances like when desk space is limited.

The Dell P2723DE has a trove of connectivity options to cater to your complex workstation requirements. It has DisplayPort 1.4 and HDMI 2.0 for PCs, plus it also has a 90-Watt USB-C port with DP Alt Mode which can charge most laptops while its in use. It also has four USB 3.2 ports and an RJ45 LAN port, but it doesn’t have a 3.5mm jack or speakers.

Again, Dell has intended this monitor to be bought with its mini soundbar which was designed to attach to the notches at the bottom bezel. You will also have to sacrifice a USB port, but that’s a minor inconvenience if the speakers were included. But the annoying thing is that you must buy them separately for fifty bucks more or less.

The Dell P2723DE sports a 27-inch IPS panel with a 2560 x 1440 resolution, a 60Hz refresh rate, and a 5ms response time. Its backlight has a 350 cd/m2 maximum while its contrast is listed at 1000:1 unlike the IPS Black-equipped models from the U series. This model doesn’t advertise HDR features, but that’s understandable since it was meant for business use.

27-inch 1440p monitors make sense if you want to upgrade from your 1080p screen at the office. It is not a huge jump like 4K, but the benefits of the higher pixel count will immediately become noticeable and enjoyable. You get more space to work with while images and video will instantly look sharper and more detailed compared to when they are viewed in full HD.

The Dell P2723DE renders 100% sRGB but its DCI-P3 coverage is a bit low for a modern IPS panel at 76%. That’s fine for basic use, and only those who are also seeking a monitor for entertainment or editing will miss the extra vibrancy. its default accuracy, on the other hand, is impressive since the deltaE average is only at 1.64.

Most won’t need to calibrate the display, but doing so will improve that dE average to a stunning 0.87. That’s a score you mostly see on editing displays, so this is a good sign of the quality of the panel Dell used. You need a colorimeter to achieve an improvement like this, but that purchase only becomes viable if your work requires absolute color accuracy.

The Dell P2723DE’s backlight only managed to reach 320 cd/m2, but that’s sufficient even for daytime use. its contrast reached a healthy 1140:1 at 70% brightness, but the monitor is still incapable of deep blacks. This weakness becomes more noticeable while using the monitor at night, but it’s an accepted flaw of IPS technology.

Panel uniformity for the review sample did not show any noticeable backlight leaks or clouding issues on any of its quadrants. There is some difference in the backlight spread from top to bottom, but it’s not immediately visible. Note that this can change with every retail unit made due to tolerances so there are good and bad ones out there.

The Dell P2723DE has a decent pixel response time despite its 60Hz limitation and lack of gaming-grade features like MPRT boosts or strobing. Setting its overdrive to its Fast setting helped in keeping the persistence to a minimum so they become less disturbing in fast-paced scenes. This only becomes an issue if you play competitive titles, but you have to take note that 144Hz models are cheaper now if that’s the focus.

Another downside for gamers is that this monitor lacks Adaptive Sync compatibility. 1440p is easy for most modern GPUs, but that doesn’t mean that you will not experience tearing and stuttering in demanding titles. Its input lag sits at 9ms, but it’s still very responsive so you won’t feel any delays or sluggishness between the screen and your mouse or keyboard.

Thoughts on the Dell P2723DE

The Dell P2723DE is a well-designed business monitor that was made to suit modern requirements. It carries a high-quality IPS panel with excellent accuracy, plus it has modern features like a 90-Watt USB-C for laptops. It is built to last and it looks attractive despite the simplicity of its overall aesthetic.

It has limitations like its lack of a good pair of speakers which, in our opinion, should be standard at this price range. However, its biggest flaw is its high price which goes over what some 4K business monitors ask for ownership. It’s a great monitor for work, but you have to unload a good amount of cash if you want to get it without a discount.

Search
You are here: Home / Reviews / Dell P2723DE Review – Premium 1440p Business Monitor with USB-C and Daisy Chaining
This website uses cookies to improve your experience. We'll assume you're ok with this, but you can opt-out if you wish.Accept Read More
Privacy & Cookies Policy