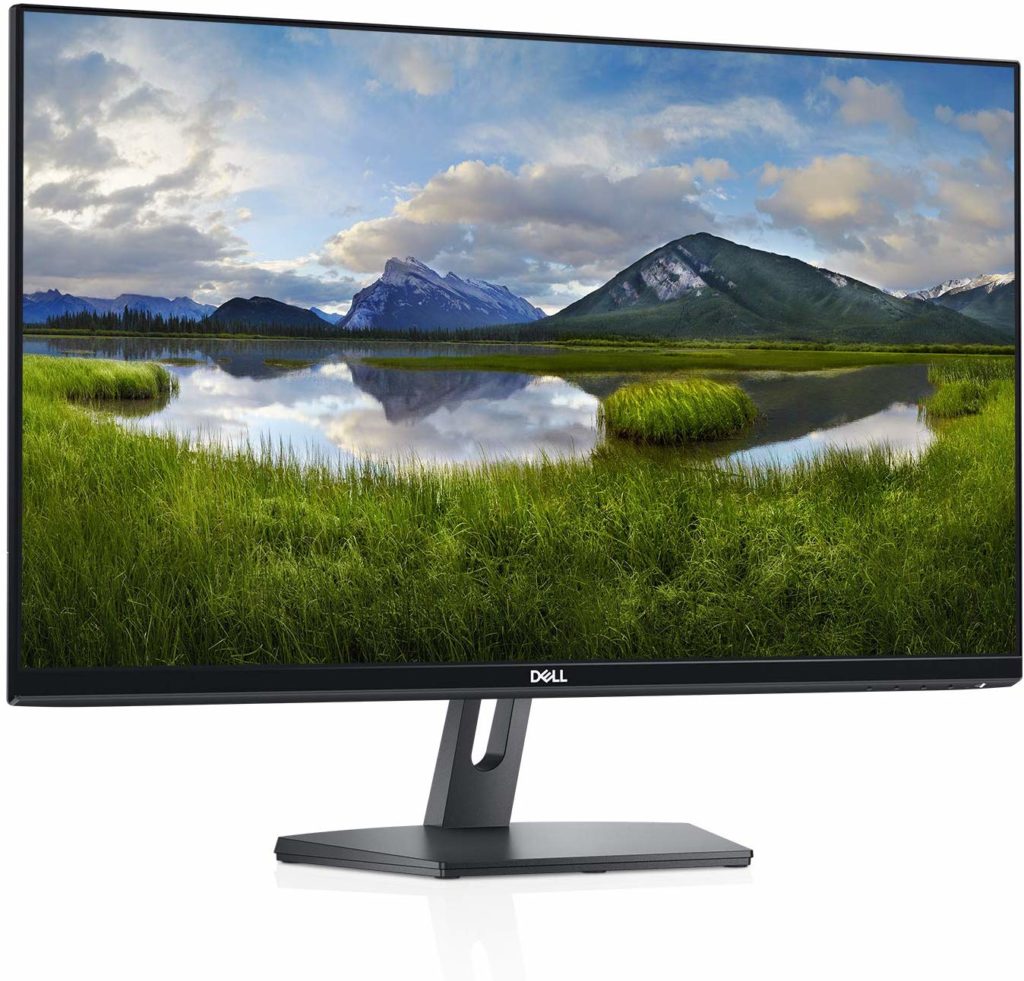 The Dell SE2719H is a very affordable 27-inch monitor with a 1080p IPS screen that’s ideal for daily use in the home or office. The product doesn’t offer specialized specs, but its promise of a clear view and its sleek and sophisticated design make it an attractive option. Let’s check out if the Dell SE2719H can offer a level of performance that can equal or even exceed the SE2717H and its success in the market. 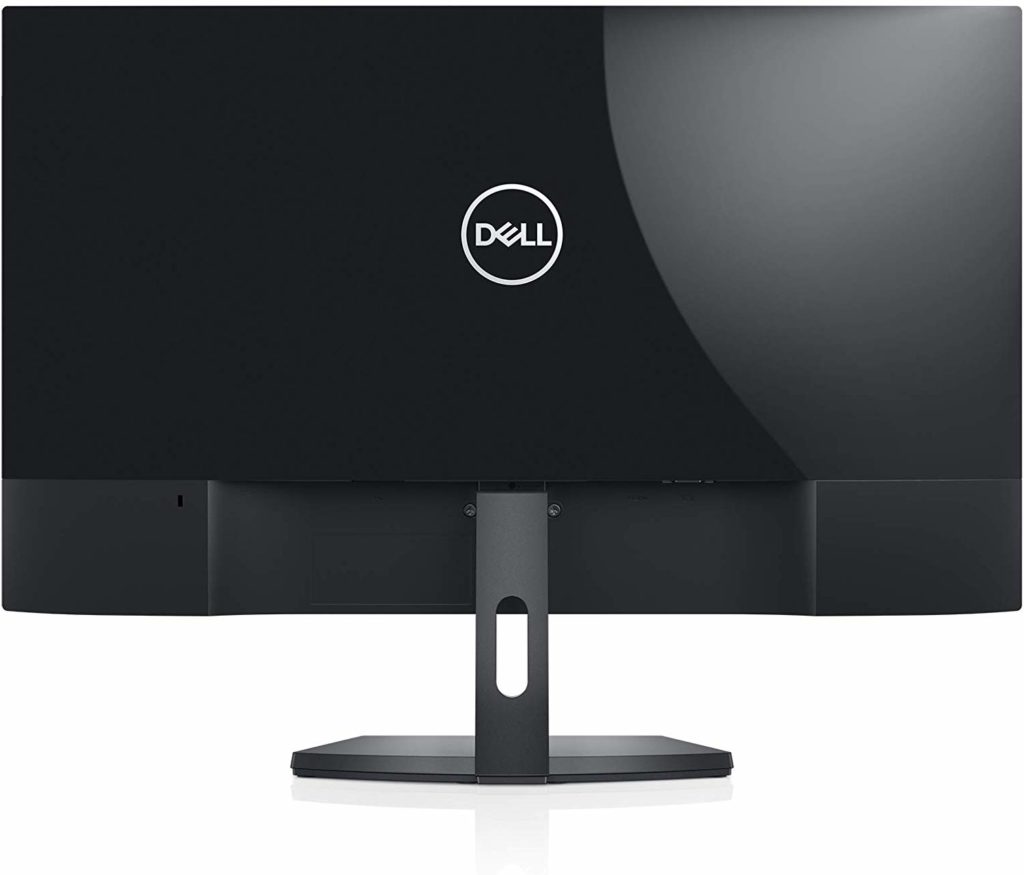 The Dell SE2719H offers a slightly modified design that doesn’t steer too far from its signature aesthetic for its display products. The product looks like it costs more with its sleek all-black look and slim proportions. The rear part of the chassis has a glossy surface, so make sure you use a super-soft cloth made of microfiber for cleaning since it scratches easily.

The display is also bezel-free on three sides, making this model a practical choice for multi-monitor setups. Thin panel borders are still visible when the screen is in use, but it isn’t as noticeable as full plastic strips on the sides.

Build quality for the Dell SE2719H is decent, but there is a slight wobble on the device if you type too hard or accidentally nudge the chassis. Quality control is, as expected, great since we did not find any sharp edges or uneven seams. The monitor’s plastic parts don’t feel brittle, but we couldn’t shake off the feeling that it was a bit thinner than some models we’ve handled.

It’s understandable that the Dell SE2719H still uses OSD buttons since its one of the most affordable offerings in the brand’s monitor portfolio. Even the buttons themselves are crisp and responsive, plus they are conveniently located at the right-hand bottom corner. However, we still heavily prefer joysticks since they lessen the struggle of accessing the OSD submenus, especially in the dark.

Another limitation of the Dell SE2719H is its stand which you have to live with if you purchase this monitor. The mechanism only offers tilt, so setting viewing angles will be limited in numerous ways. You also don’t get VESA mounting options with this model, so you are stuck with the default option.

The Dell SE2719H is one of the few monitors available now that doesn’t have DisplayPort 1.2 at the rear. The resolution and refresh rate do not need anything better than the HDMI 1.4 and VGA slot it provides anyway. However, we wish DP was included along with some USB slots since modern users usually use the monitor as a connectivity route for cable management.

There is also no built-in speakers on the Dell SE2719H, but that’s the most forgivable exclusion of the package. These extras usually do not sound good enough for entertainment purposes, so they don’t get much use anyway.

The Dell SE2719H sports a 27-inch IPS panel with a 1920 x 1080 resolution, 60Hz refresh rate, and 5ms response time. The backlight is rated at 300 cd/m2, while contrast sits at a typical 1000:1 for decent daily performance. The monitor isn’t specialized for fast-paced gaming or content creation and design, but its a designed as a decent daily driver that will not hurt your pocket.

The screen’s size and its resolution can at times become the subject of display for computer users due to its lower pixel density. However, monitors like the Dell SE2719H do not look too fuzzy to be considered unusable, even if some pixels become slightly visible. The good news is you don’t have to struggle with visibility, so there will be less strain on your eyes.

The Dell SE2719H’s main weakness is its poor performance in color quality which starts with its gamut coverage of only 92%. The latter is still sufficient for daily use, but what brings it down is its color accuracy with a DeltaE average of 3.92. The screen isn’t vibrant, plus there will be some inconsistencies in some shades, especially the brighter or richer ones like reds.

The screen also cannot get as bright as Dell claims, with the backlight maxing out at 245 cd/m2 at 100% in the OSD. Contrast is also limited to around 700:1, raising the black luminance of the panel to levels which will make the screen look grayish when dark scenes are on it. Using a colorimeter can help with the color variance, but unfortunately, most of these limitations are permanent.

One good thing we noticed on the Dell SE2719H is its panel uniformity which did not have any visible inconsistencies such as clouding. The panel’s edges had very minimal bleeding, but it did not affect the adjacent quadrants and color temperature on a considerable scale. Of course, this result could vary between unit to unit since no two IPS panels are made equal.

Another positive characteristic of the Dell SE2719H is its pixel responsiveness which enabled smoother transitions compared to other 60Hz offerings. Setting the overdrive to its Fast level cleared some of the pixel persistence that was seen during testing without any perceivable overshoot. Some artifacts or trailing can still become visible if the movements are fast enough, but its difficult to notice and forgivable for a 60Hz variant.

The Dell SE2719H doesn’t support FreeSync, so naturally, G-Sync compatibility is out of the question. The monitor was not designed for gaming so it’s forgivable, but FreeSync comes standard with almost every level of display products by today’s standards. Input lag sits at 10ms at 60Hz, so there are no noticeable or irritating delays while gaming.

Thoughts on the Dell SE2719H

The Dell SE2719H is a decently-designed and very affordable home or office monitor, but it carries a lot of limitations which cancels out its value proposition. The IPS panel has good and clear visibility, but its poor contrast and color quality means images will look washed out or undersaturated. The features such as connectivity and ergonomics are limited, and there are no alternatives or exceptions for them.

We only recommend the Dell SE2719H if you need a monitor for office work such as document processing and browsing. Other value products like the BenQ GW2780 will provide a better experience if your usage includes media consumption and casual gaming.

Search
You are here: Home / Reviews / Dell SE2719H Review – Affordable 1080p IPS Monitor for Mixed Use
This website uses cookies to improve your experience. We'll assume you're ok with this, but you can opt-out if you wish.Accept Read More
Privacy & Cookies Policy