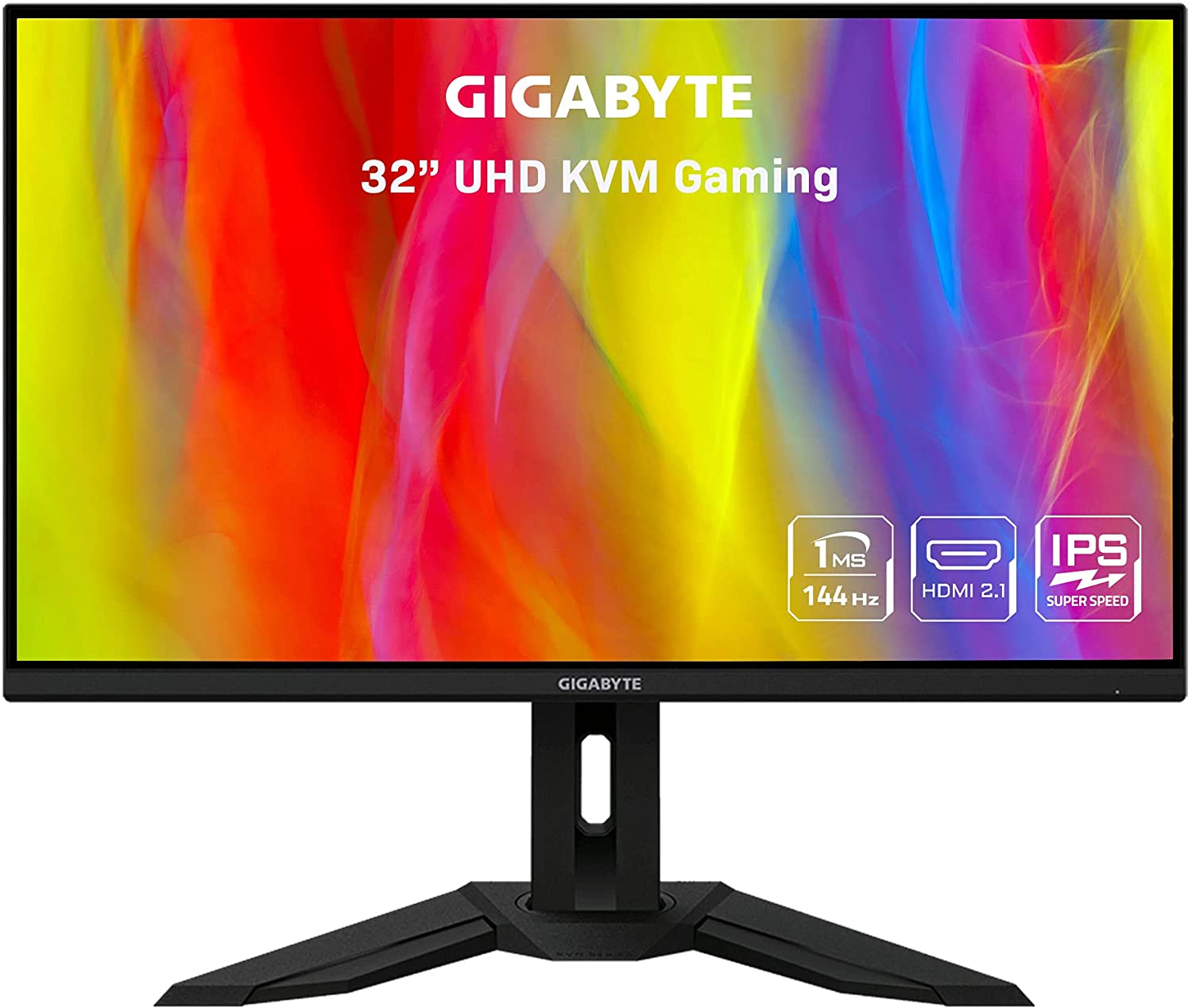 The Gigabyte M32U is a very attractive gaming monitor thanks to its good size and HDMI 2.1 connectivity for next-gen consoles. It’s the perfect solution for those who want to enjoy high-end gaming without paying for the steepest price tags found on similar but higher-tiered models like the Asus PG32UQX. The Gigabyte M32U is still quite expensive, so let’s check it out to see if it’s worth the price and if it should be your next upgrade. 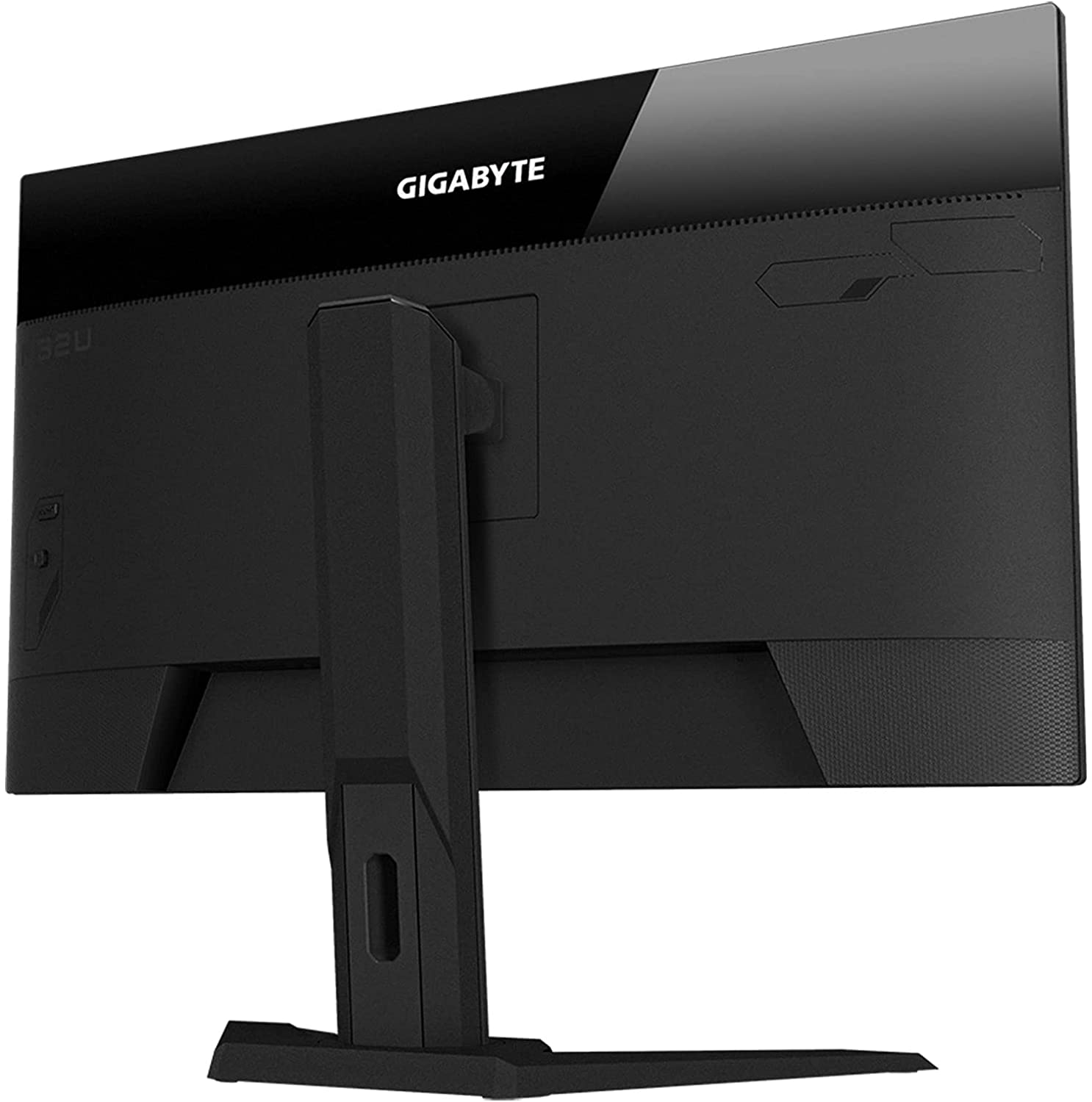 The Gigabyte M32U has more or less the same aesthetic as its predecessors such as the Gigabyte M32Q so it looks like it was meant for the office. The chassis has a matte black finish which is easy to maintain while looking discrete. The display is bezel-free on three sides, although you still have to deal with thin inner borders when it’s in use.

You have to account for the Gigabyte M32U’s size and your desktop since it is quite big for a 16:9 display. It’s not as wide as the 34-inch models, but it is still almost two feet from its side to side. It doesn’t need a lot of depth even if it has a large base, but it is quite heavy so asking for help in setting it up might be a good idea.

Build quality for the Gigabyte M32U is great even if it’s on the same level as the more premium Aorus models. The plastics used are thick and sturdy so they won’t flex or crack easily with minimal force. The included stand is stable and firm so the monitor won’t shake or sag while you are furiously gaming.

The has a handy OSD joystick which gives you easy access to its various features and well-equipped OSD. It also has a dedicated KVM switch that lets you shift between the inputs and make use of the monitor’s various connectors to maximize productivity. It’s also compatible with Gigabyte’s OSD Sidekick which lets you tweak the monitor directly in Windows.

The stand included with the Gigabyte M32U offers tilt, swivel, and height adjustments for your comfort and safety. You can’t pivot the screen, but it wasn’t meant to be used as a portrait monitor on the side anyway. You can also use VESA mounts, but that’s unnecessary unless desk space is limited or if you have multiple displays.

What makes the Gigabyte M32U special is its connectivity layout which was designed to maximize its 4K 144Hz screen. You get a DisplayPort 1.4 slot with DSC to enjoy compression-free visuals on a PC, along with two HDMI 2.1 ports for the PS5 or the Xbox Series X. You also get a USB-C slot that supports DP Alt Mode for laptops, but it doesn’t provide charging power like the others.

There is also a slew of USB 3.0 ports, along with a 3.5mm jack for your headphones. The Gigabyte M32U also has a pair of speakers, but they only have 3 watts of power so they aren’t good enough for gaming or even movies. They sound decent enough as secondaries, so you can use them for music or even conference calls if you work from home.

The Gigabyte M32U boasts a 32-inch IPS panel with a 3840 x 2160 resolution, a 144Hz refresh rate, and a 1ms boosted response time. The backlight has a 350 cd/m2 typical brightness and a 1000:1 contrast ratio like most IPS panels. This model is compatible with HDR, but it doesn’t mention certification like some of the previous models.

4K is more desirable at this size for desktop use over the more common 27-inch variants since simply because it’s easier on the eyes. You don’t lose sharpness even if the pixel density is lower, but legibility and visibility are better for tasks other than gaming. It is more ideal for productivity use, making them more flexible than their smaller siblings.

The Gigabyte M32U renders more than 100% sRGB and around 98% DCI-P3 for excellent vibrancy in games and daily tasks. Its default accuracy has a deltaE average of 2.26 which isn’t perfect, but ideal for daily use. The screen has a few color errors in some shades, but it looks great after a few minor tweaks to its common settings like its brightness.

Calibrating the Gigabyte M32U reduced its deltaE average to an impressive 0.76 which makes the monitor suitable for color-critical work. You need a colorimeter to get this kind of result, but there is no guarantee even if you get one since every panel has different results. We don’t recommend buying one if your intent is to use this monitor for its original purpose.

The Gigabyte M32U only hits 341 cd/m2 in SDR, but it peaks to 425 cd/m2 when it receives an HDR signal. Its contrast ratio, on the other hand, isn’t particularly impressive at 1061:1 at 60% brightness. The screen can’t produce deep blacks, and the monitor cannot reproduce an appreciable HDR image when it’s active.

Its panel uniformity could also use some improvements since there were some light leaks at the bottom corners of the screen. This resulted in some unwanted glow or clouding issues which become noticeable in dark scenes. However, we don’t consider it as a deal-breaker since it can vary between every unit due to tolerances and the nature of IPS panels.

The Gigabyte M32U has an excellent pixel response time so it is suitable even for fast-paced titles like Warzone. It still has a bit of persistence and trailing in some scenes, but it’s not at a disturbing level for most gamers. Setting the overdrive to its Smart OD setting will alleviate this so we recommend using it, but you should play around with its settings to find what works for you.

The Gigabyte M32U is a FreeSync Premium monitor, but it also works with Nvidia’s G-Sync Compatible mode. This duality is necessary so you don’t have to stick with one GPU brand in times like now where pricing is crazy and supply is low. Input lag is a bit high at 8ms at 144Hz, but it’s still responsive and fast enough for gaming use.

Thoughts on the Gigabyte M32U

The Gigabyte M32U is an excellent pick for gamers who want high refresh 4K gaming for multiple platforms. It’s one of the ideal choices out there for gamers with powerful PCs and the next-gen consoles who don’t want to spend a grand or more. Its screen is big, vibrant, and fast, so it’s guaranteed that you will get an enjoyable experience out of it.

However, there are some minor limitations with the Gigabyte M32U such as its slightly higher input lag and mediocre HDR performance. That’s all understandable since this is a lower-priced model, so buyers should focus on its gorgeous screen. Similar monitors like the Asus PG32UQ are better in some regards, but this pick offers better value at the end of the day.

Search
You are here: Home / Reviews / Gigabyte M32U Review – Midrange 4K 144Hz Gaming Monitor with HDMI 2.1
This website uses cookies to improve your experience. We'll assume you're ok with this, but you can opt-out if you wish.Accept Read More
Privacy & Cookies Policy