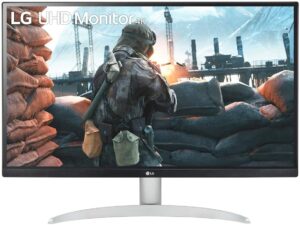 The LG 27UP600-W is an easy-to-own 4K monitor that promises rich colors and just the right number of features for the money. It’s also one of the few basic 4K monitors that offer FreeSync which enables it to work as a budget gaming display for PC and consoles. Let’s take a closer look at the LG 27UP600-W to know if it’s worth your money or if the better equipped LG 27UP850-W should be your pick. 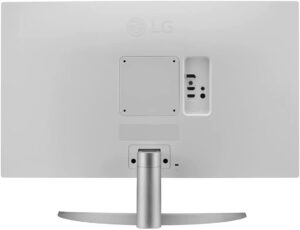 The LG 27UP600-W is the barebones variant of the lot, but it still manages to look good with its minimalist aesthetic. The monitor has a matte white chassis that’s mated to a silver stand which sets it apart from the sea of matte black monitors in its category. The display is bezel-free on three sides so there are fewer distractions while watching movies or playing games.

What’s good about monitors that do not come with fully-adjustable stands is their modest dimensions. The monitor only needs 8.3 inches of depth so it won’t get in the way of your other peripherals such as full-sized keyboards or speakers. it also only weighs less than 10 pounds so rearranging your setup or bringing it to a conference or LAN party won’t be too difficult.

Its build quality is also decent for a budget monitor that’s mostly made of plastic. Each panel is thick enough to withstand cracking and flexing, plus there were no cosmetic defects such as sharp edges or uneven seams. The stand has a slight wobble, but it only happens if you accidentally nudge the edge of the screen or your desk.

The LG 27UP600-W has an OSD joystick under the bottom bezel, unlike other budget models that still use button layouts. You also get OnScreen Control with this model which gives you easy access to its basic settings and presets. Other premium options even go as far as adding a remote, but it is mostly unnecessary for normal usage.

The stand included with the package only offers tilt, so positioning the monitor properly could be a bit trickier. The display also sits low, so taller users might need a few books or a small platform to prop it up and get a leveled viewing position. You can use VESA mounts, but the total spend might be enough to buy a better model if ergonomics is a priority. 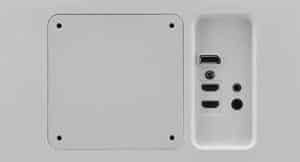 Another aspect that took a hit to lower the price is the LG 27UP600-W’s connectivity layout. It only includes a DisplayPort 1.4 slot and two HDMI 2.0 connectors, plus a 3.5mm analog jack for speakers or headphones. Frankly, that’s still acceptable since you can still connect three host devices, but we know it’s a deal-breaker for picky users that need extras like USB ports for peripherals.

The LG 27UP600-W doesn’t have speakers unlike its upper-tier siblings, but that’s okay due to the low price. Built-ins don’t sound good enough for games and movies anyway, especially since the clear and powerful variants are only used on high-end models. However, even that 2-watt pair will get some use for basic office setups, so we’d be glad to have them on a monitor like this.

The LG 27UP600-W sports a 27-inch IPS panel with a 3840 x 2160 resolution, a 60Hz refresh rate, and a 5ms response time. the backlight has a 400 cd/m2 maximum while the contrast ratio is listed at 1200:1 like some of the brand’s first few Nano IPS offerings. This model is HDR 400 certified unlike previous generations of budget models, but we know that it is limited when it comes to imaging improvements in games and movies.

27-inch 4K monitors are popular and there are a lot of options in the market for both gaming and business use. However, some have complained that it can be too sharp due to the tight pixel density, so reading without scaling can be a chore. Games and movies, on the other hand, are a different story and users will appreciate the extra crispness of the details.

The LG 27UP600-W renders 100% sRGB and around 91% DCI-P3, making it more vibrant than most budget 4K monitors. Its default accuracy isn’t perfect with a deltaE average of 2.34, but it’s already decent enough for daily use. Most users won’t need to calibrate it apart from tweaking a few basic settings since it already looks balanced out of the box.

Calibrating the monitor reduced its dE average to 1.07 which is excellent considering its low price point. Doing this makes it usable for editing and content creation although you need a colorimeter to achieve it. Those aren’t exactly cheap, and you are better off with a professional variant instead if you need a 4K monitor for color-critical work.

The LG 27UP600-W’s backlight reached 331 cd/m2 in SDR and it peaked at 404 cd/m2 when it is HDR mode kicks in. its contrast ratio peaked at 1098:1 at 50% brightness, but there is no considerable expansion when HDR is active. The screen is still incapable of deep blacks like most IPS panels and its HDR mode isn’t really its biggest selling point.

The sample’s panel uniformity had some backlight issues which added clouding to dark scenes and images. Its not noticeable against bright or white backgrounds, but it will be annoying if you are gaming or watching movies. thankfully, this isn’t permanent on every monitor out there, so it’s possible to get a unit with a cleaner screen.

Responsiveness isn’t a particular strength of the LG 27UP600-W, but it’s actually decent for a budget model that’s limited to 60Hz. You need to use its overdrive’s Fast level to minimize blurs without adding overshoot. However, it is not a complete workaround over the 60Hz limit, so the monitor won’t be suitable for fast-paced or competitive gaming.

The LG 27UP600-W is compatible with FreeSync and G-Sync works if you force it via Nvidia Control Panel. This duality is essential since GPUs aren’t easy to find at good prices and 4K gaming is very prone to FPS drops and stuttering. Input lag sits at 9ms at 60Hz so the screen is still responsive without any perceivable delay.

The LG 27UP600-W is a decent choice if you want an inexpensive 4K monitor for a bevy of uses at home or in the office. Its IPS panel shows comparable quality versus the upper-tier model so it’s decently accurate and vibrant. It is not the fastest 4K monitor available, but it has good pixel response time performance with no sign of input lag.

However, the limited features such as the stand or its lack of usable extras such as USB ports could be deal-breakers for some users. Adding an ergonomic stand will increase your total cost, and it might become enough to buy a better-equipped monitor. It’s a decent pick, but you need to be mindful of its limitations which will require more money to solve.

Search
NEW
POPULAR
You are here: Home / Reviews / LG 27UP600-W Review – Affordable 4K IPS Monitor for Daily Use
This website uses cookies to improve your experience. We'll assume you're ok with this, but you can opt-out if you wish.Accept Read More
Privacy & Cookies Policy