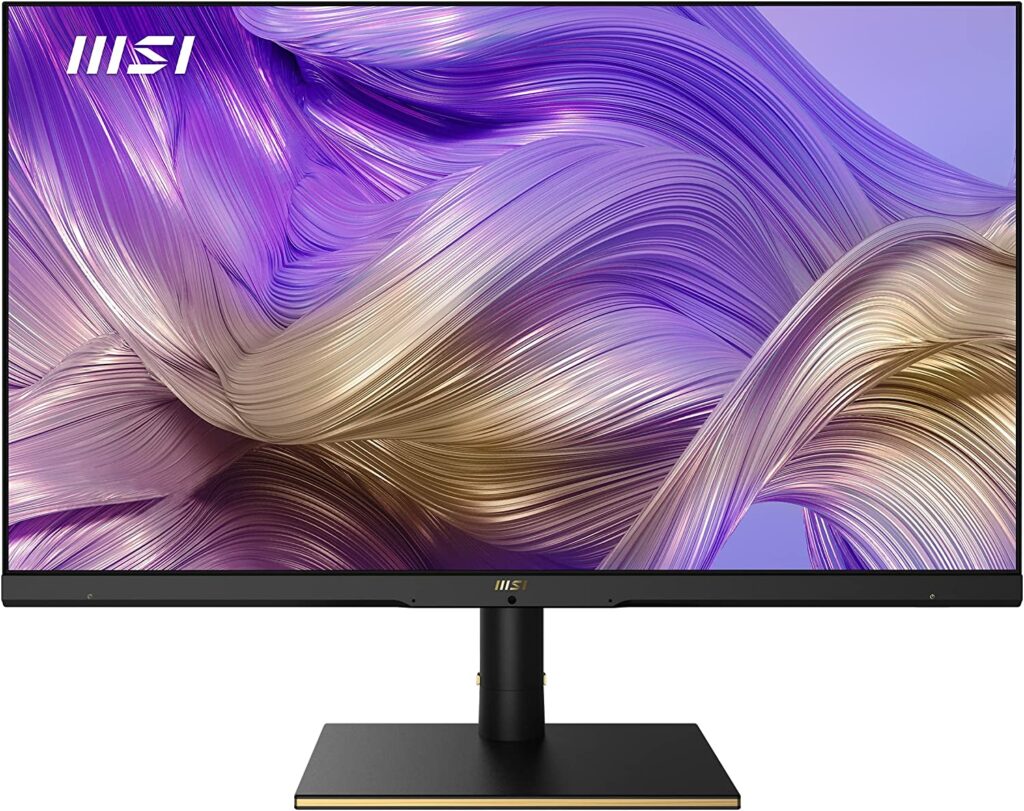 The MSI Summit MS321UP is a premium business monitor that has intuitive features that are meant to enhance the user experience. It’s an appealing product for creators and editors, plus it is designed to look good while making use of its gorgeous 4K screen. The MSI Summit MS321UP is a bit pricey for our taste, but let’s check it out to see if it’s worth the investment. 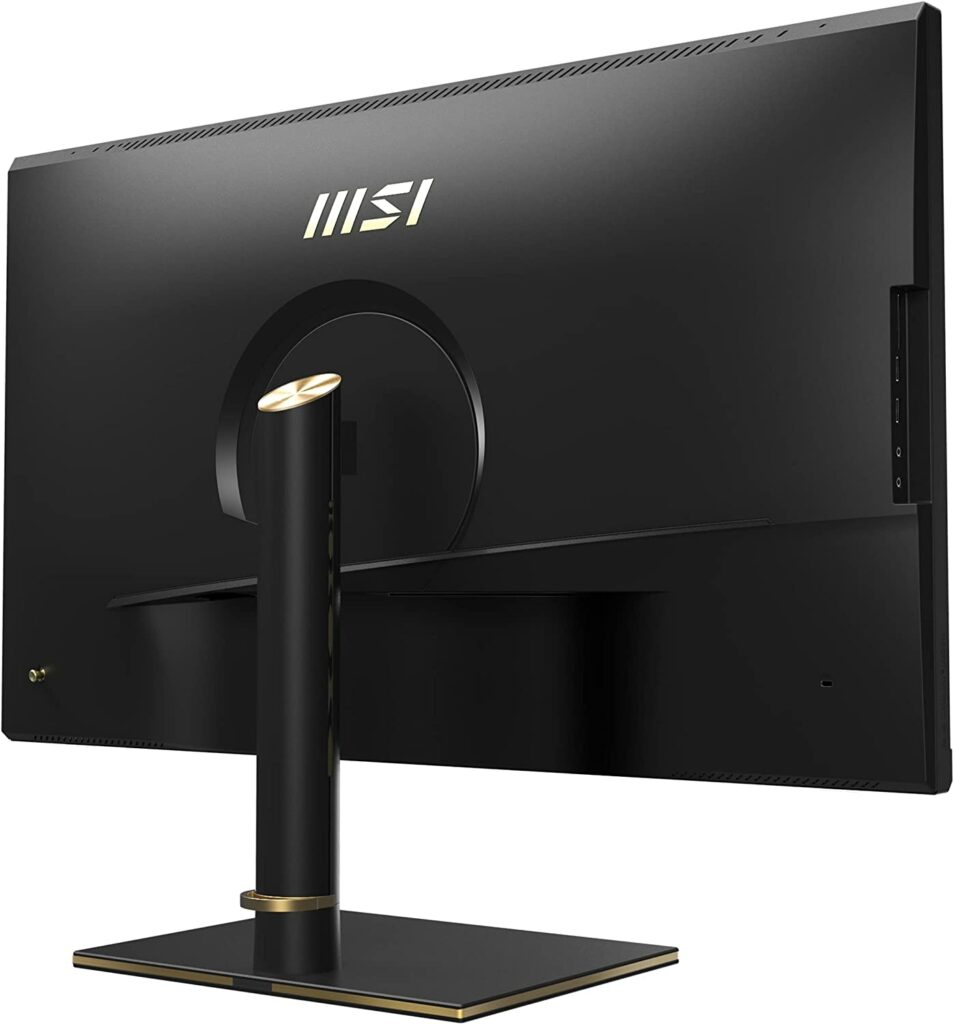 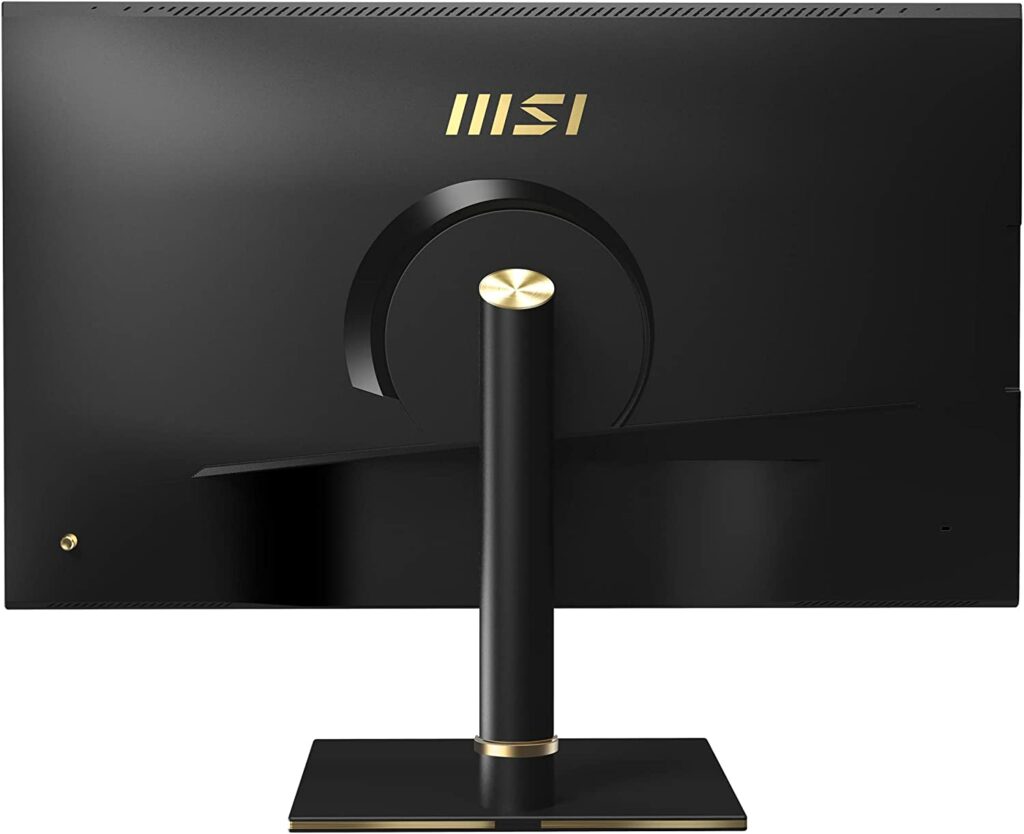 The MSI Summit MS321UP sports a simple yet elegant design that is reminiscent of its main competitors from Asus’ ProArt line. The monitor has a matte black finish with gold accents, so it looks quite different from the brand’s gaming-oriented products. The display is bezel-free on three sides, but it still has thin inner borders, but you can hide them if you use the calibration hood. 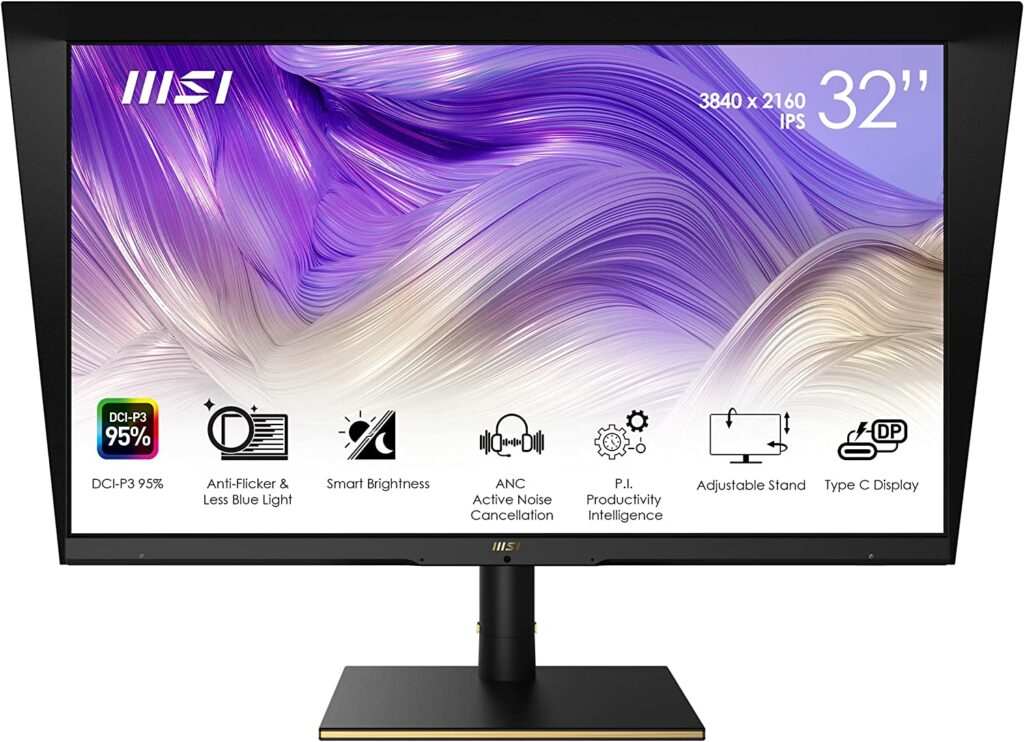 It’s a large monitor at 32 inches so it will be essential to measure or at least estimate how much space you have for it on your desk. It will need 9.25 inches of depth from your desk, although its base is flat so it shouldn’t be too intrusive. It’s also heavier than gaming variants at 21.38 pounds, but we know that it’s because of premium materials and build quality.

Its build quality is fantastic since it is a premium model with very few compromises and a high price tag. The plastics used are noticeably thicker and reinforced so it won’t crack or flex even if you squeeze harder than usual. The stand is very firm and stable so the large screen won’t lose its angle or wobble while you are busy with your tasks.

The MSI Summit MS321UP has a five-way joystick at the back to make it easier for users to access its settings. You can also use MSI’s Productivity Intelligence app so you can easily utilize its features such as its KVM functionality or even store your color profile.  Other premium models go as far as including remotes with the package, but frankly, the joystick and a supporting app will be enough.

The stand included with this monitor offers tilt, swivel, and height adjustments for your convenience. You can’t pivot the screen, but that’s okay since it was not meant to be used as a secondary portrait display. You can use VESA mounts, but that only becomes necessary in extreme circumstances.

The MSI Summit MS321UP has a wide array of connectivity options, but it falls short of becoming impressive. It has DisplayPort 1.2, two HDMI 2.0 ports, and a USB-C slot which is disappointing since it can only provide up to 15 watts of power. Modern prosumer monitors should always include up to 90 watts of power, especially at this price point.

You also get input/output and combo audio jacks, plus an SD card slot that is placed next to two of the USB 3.2 ports in a hub. It’s located at the side of the display for easy access so you don’t have to flip the device if ever you need to use it. It doesn’t have speakers, but it instead offers noise-canceling dual microphones.

The MSI Summit MS321UP boasts a 32-inch IPS panel with a 3840 x 2160 resolution, a 60Hz refresh rate, and a 4ms response time. Its backlight has a 400 cd/m2 output while the contrast ratio is listed at 1000:1 like most IPS panels. This model is rated with VESA’s DisplayHDR 600 certification so it’s a bit better when it comes to peak brightness and contrast.

4K is better suited for 32-inch screens in our opinion since the pixel density isn’t too tight. That means scaling won’t be as necessary since images or small objects like letters do not become too small or sharp. The only downside of 4K is its massive GPU requirements, but that’s not important for a prosumer or business variant.

The MSI Summit MS321UP renders more than 100% sRGB and 98% DCI-P3 for stunning vibrancy in any type of use. its default accuracy had a deltaE average of only 1.09, so most users won’t even need to calibrate it. Only a few minor tweaks will be necessary, even if you are using the monitor for content creation.

Calibrating it reduced that dE average to an impressive 0.49, making the monitor ideal for extremely delicate editing work. you will need a colorimeter for this, but it will only be a good investment if you need absolute accuracy for your work. It is also important to remember that you can store your calibration profile within the monitor’s app so you don’t have to re-calibrate it if you switch to another computer.

The MSI Summit MS321UP’s backlight reached 395 cd/m2 in SDR, but it only peaked at 550 cd/m2 when it is HDR mode is active. Its contrast ratio reached 1204:1 at 50% brightness, but it isn’t enough to lower the black luminance of the screen. It also doesn’t have a refined mini-LED backlight so its HDR performance is so-so by today’s standards.

Panel uniformity for the sample didn’t have any deal-breaking defects like backlight leaks or massive clouding. There is very little variance from the backlight, so the screen mostly looks uniform even if you view dark scenes. Only a colorimeter can see the flaws but take note that this usually varies with every monitor made due to tolerances.

The monitor’s pixel response time is quite decent even if it is limited to 60Hz and designed for professional use. There will still be some persistence, but you can’t use the overdrive to deal with them since anything higher than the Normal level will induce overshoot. This model is good for most gaming purposes, but anything that involves competitiveness will require a 144Hz alternative.

The MSI Summit MS321UP doesn’t have Adaptive Sync capabilities so you can’t rely on VRR to protect against tearing and stuttering. This is normal for prosumer variants, but we think users would it more attractive if it did have the feature. Input lag sits at 6ms at 60Hz, so the screen doesn’t have delays or a sluggish feel.

Thoughts on the MSI Summit MS321UP

The MSI Summit MS321UP is a fantastic option if you want superb color, design, and functionality. Its 4K IPS panel offers brilliant saturation in sRGB and DCI-P3, plus it’s already accurate out of the box. it has an array of useful add-ons like its noise-canceling microphone.

However, it feels like there are some things that the MSI Summit MS321UP is lacking despite having a high price tag. It has a microphone for conferencing but it doesn’t have speakers or a webcam, while its USB-C slot is still limited to 15 Watts like budget models. It’s a great monitor, but we think MSI should upgrade it to make it a top choice in its segment.

Search
You are here: Home / Reviews / MSI Summit MS321UP Review – Premium 4K Business and Productivity Monitor
This website uses cookies to improve your experience. We'll assume you're ok with this, but you can opt-out if you wish.Accept Read More
Privacy & Cookies Policy