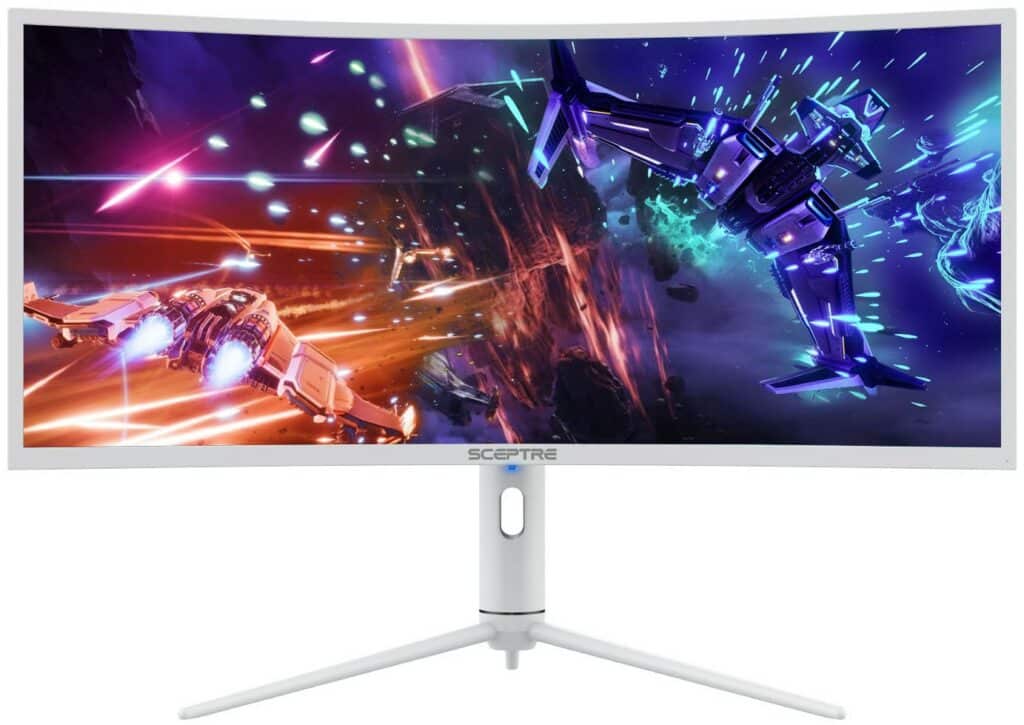 The Sceptre C345B-QUN168W is an HDR 1000-certified ultrawide monitor with great gaming specs and an improved design. However, what’s shocking about it is its price which hovers around half a grand when other HDR 1000 models are still over a thousand. Let’s if the Sceptre C345B-QUN168W can reach its HDR 1000 specification or if it’s just a basic budget ultrawide with additional marketing gimmicks. 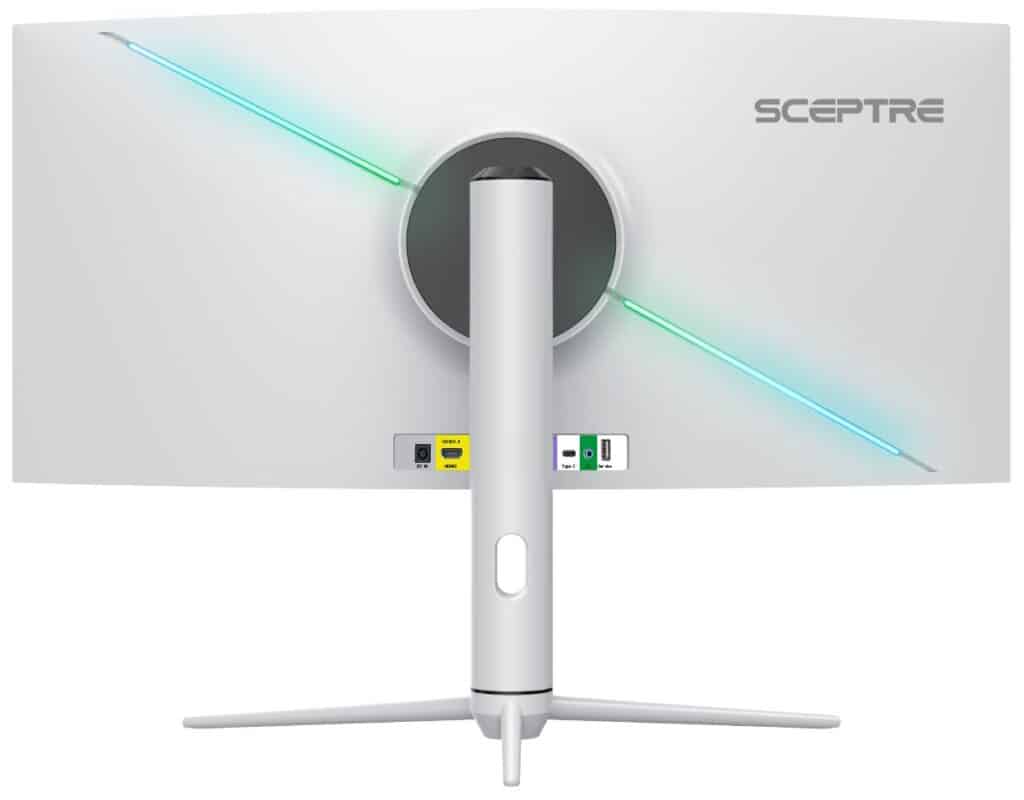 The Sceptre C345B-QUN168W has a much nicer aesthetic than its predecessors and it’s easy to mistake it for something from a premium brand like Asus or Samsung. It has a Nebula White finish and RGB lighting at the back, although you can also get it in black. The display isn’t bezel-free, but the borders are not as noticeable as anyone would think if games were running.

Take note of its size since it will be a factor if you have a small desk or plenty of peripherals next to it in your setup. It’s almost a foot deep and 32 inches wide so it can offset some of your other gear if there isn’t enough clearance for it on your tabletop. It’s lightweight at 15.32 pounds for an ultrawide, but extra care is still necessary if you want to move it around due to its size.

There is some room for improvement with its build quality since the plastics feel ordinary and flimsy in some spots. However, it looked clean and without cosmetic defects, which you’d usually associate with a budget model. There is a slight wobble from the stand, but it only happens if you accidentally nudge the screen’s edges.

The Sceptre C345B-QUN168W has an OSD joystick so its settings are easier to access compared to other budget models with buttons. It’s located under the Sceptre logo so you don’t have to lean in to use it. The only issue most reviewers have with it is the sluggish menu but that’s forgivable for most users.

The stand included with the package offers tilt, swivel, and height adjustments for your convenience. Most Sceptre monitors are limited to tilt due to their budget-oriented nature, so this is an upgrade since the pricing didn’t soar. You can use VESA mounts, but we think it is only necessary if you have a small table or multiple screens.

One aspect that stuck to the budget-oriented design of the monitor is its connectivity layout. You get DisplayPort 1.4 and three HDMI 2.0 ports, but there are no extras like USB ports other than the 3.5mm jack. It includes a USB-C port that can accept video signals, but the monitor will be limited to 100Hz at 3440 x 1440.

You also get a pair of built-in speakers with three watts of power per channel. Its great to have them as a backup set, but they are quiet and incapable of bass and detailed sound. A monitor like this is better served by good headsets since they will be more immersive than tinny-sounding speakers.

1440p ultrawides are great for both gaming and business use due to the extra width that enhances the user’s experience. You can view wider FOVs in games that support the resolution or stack three or four apps next to each other to increase productivity. It would take a more powerful GPU to maximize its refresh rate, but it is manageable now with the available cards from Nvidia and AMD.

The Sceptre C345B-QUN168W renders more than 100% sRGB and 93% DCI-P3 for rich colors in games and movies. It is not calibrated since the deltaE average is quite high at 3.64, but that’s a common characteristic we see on saturated monitors in the budget category. Gamers will be happy with it despite that, so only a few tweaks will be necessary.

Calibrating it reduced the dE average to 1.45 which is more balanced and natural-looking than the default setting. The downside is that you will need a colorimeter to get a comparable result since copying settings or ICC profiles will produce different results. Getting the gadget will only be practical if you do color-critical work.

The Sceptre C345B-QUN168W reached 766 cd/m2 at 100% in SDR and it peaked at 894 cd/m2 when it’s HDR mode is active. Its contrast ratio reached as much as 3661:1 in SDR with some expansion that doubled or tripled that when the local dimming worked. That’s impressive for a budget model, although it has limitations since it is not equipped with a FALD unit.

Panel uniformity for the Sceptre C345B-QUN168W had some issues such as backlight leaks at the top edges of the screen. The limited dimming zones also add clouding when HDR is active, so it can ruin the visual experience for sensitive users. It’s a limitation that comes with the low price, but we don’t consider this model as a fake HDR 1000 monitor.

However, the weakest link with this monitor is its pixel response time which makes it prone to dark trails and smudging in fast-paced or contrasting transitions. Maxing out its overdrive only introduced overshoot, so we recommend using it sparingly while keeping your framerates close to 144Hz. This is still common with modern VA monitors so it is still an acceptable limitation.

The Sceptre C345B-QUN168W is compatible with both FreeSync and G-Sync so you will be protected from tearing and stuttering. Both GPU brands have great 1440p solutions, so being able to switch without losing VRR functionality will come in handy when you upgrade. Input lag sits at 5ms at 144Hz so there is no need to worry about delays while enjoying your favorite titles.

Thoughts on the Sceptre C345B-QUN168W

The Sceptre C345B-QUN168W is a decent gaming monitor that retains wallet-friendly pricing even if it has specs that are reserved for high-end variants. Its HDR 1000 functionality isn’t perfect, but we’d love to have it while only having to pay more or less half a grand. It’s vibrant and attractive, unlike the older Sceptre models which were too plain.

However, you have to live with some of the monitor’s quirks and shortcomings which are trade-offs that come with its affordability. It’s not the best HDR 1000 monitor out there, but it certainly has a few advantages over similar choices at the $500 mark. It’s a great buy, but we’d like to encourage you to consider saving more if you are after an HDR 1000 gaming monitor.