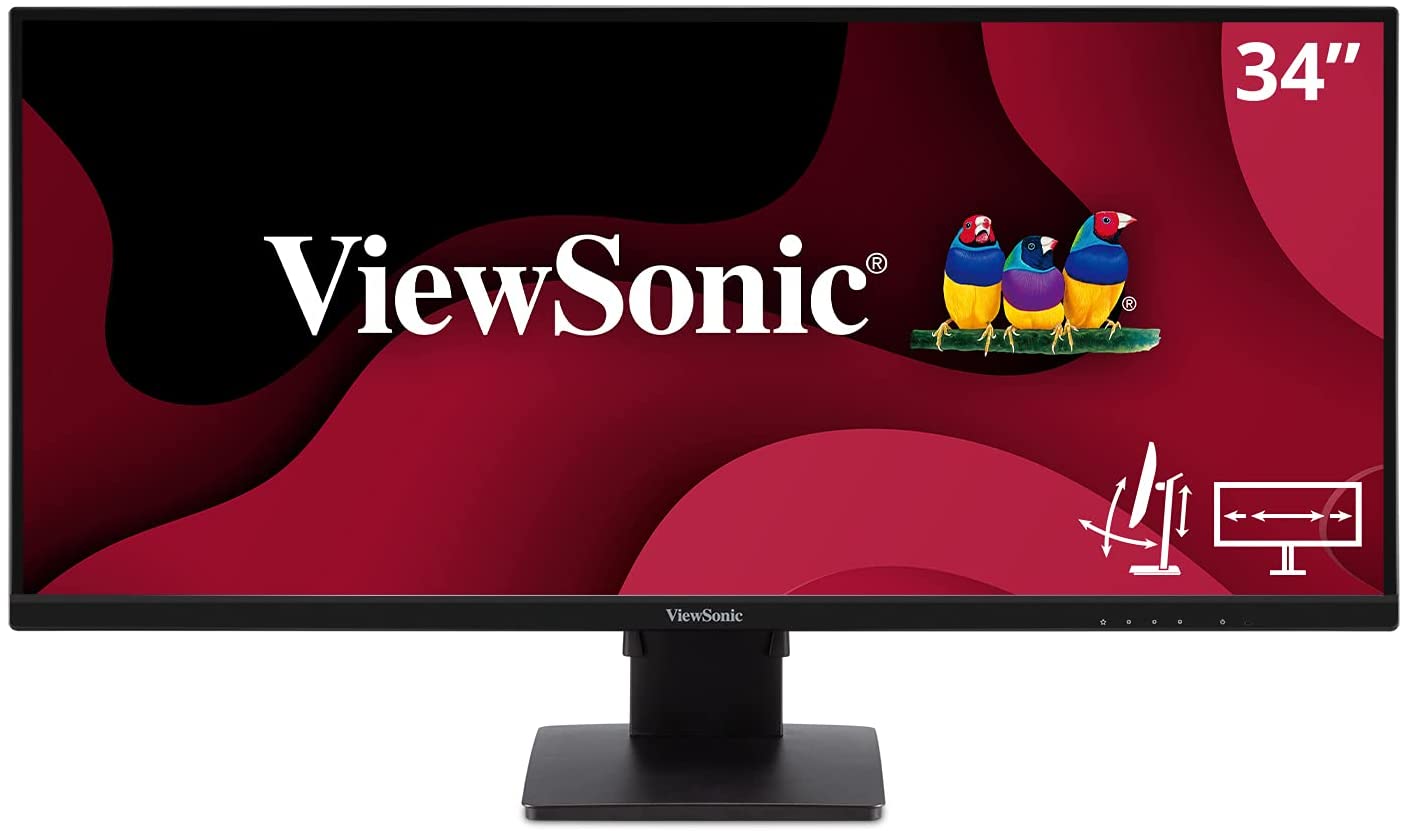 The ViewSonic VA3456-MHDJ is a value-oriented IPS ultrawide that’s meant for business or office users who want a crisp and clear screen. its price can get you a 144Hz variant like the G34WQC, but you have to remember that comparable IPS ultrawides cost still cost $800 or more. Let’s see how competitive the ViewSonic VA3456-MHDJ is versus its premium competitors like the Dell P3421DW. 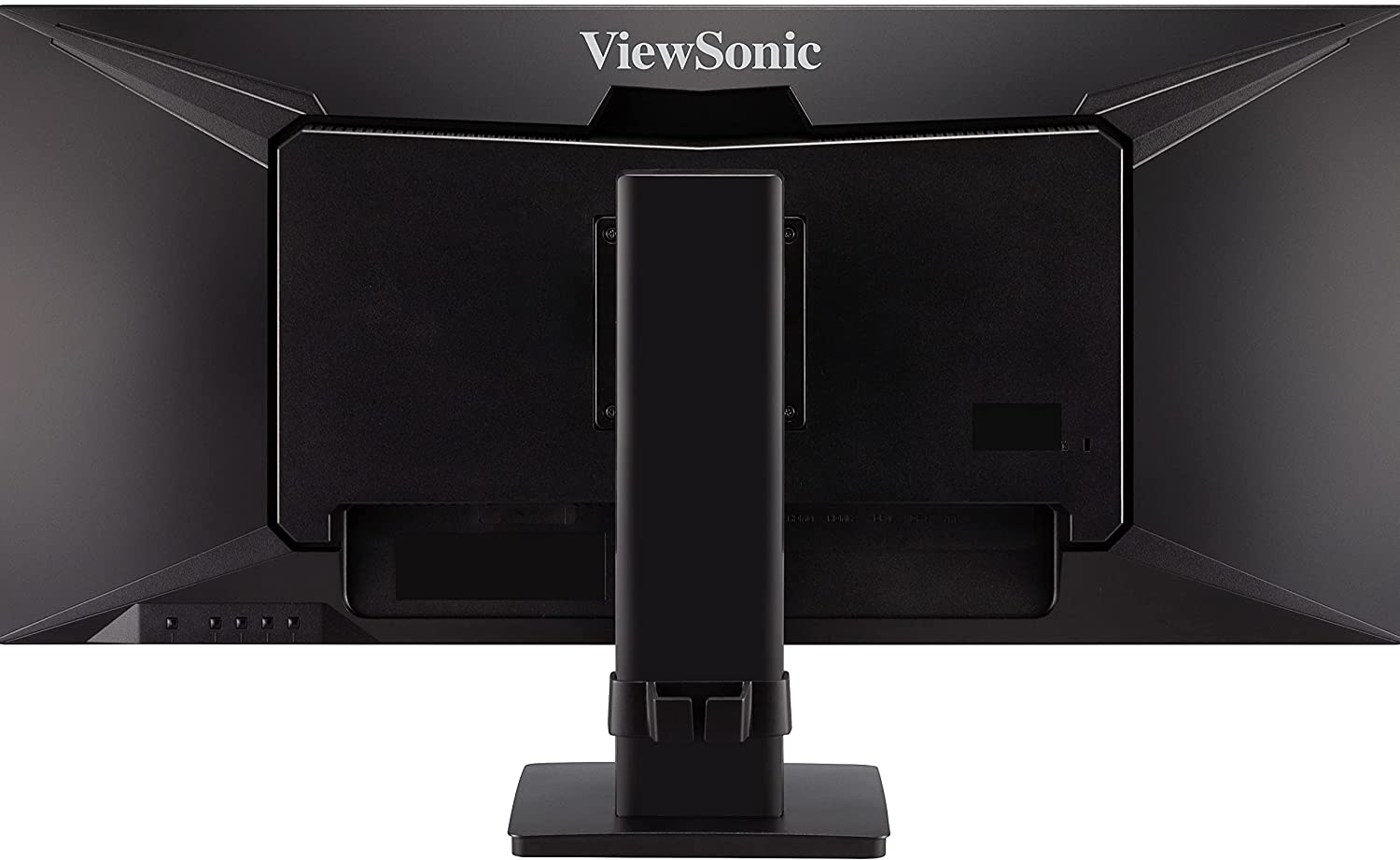 The ViewSonic VA3456-MHDJ sports a clean design that would look nice anywhere it’s placed, whether it’s in an office or your gaming room. The device has a matte black finish that is resistant to scratches and dust, plus it is very easy to clean. The display is bezel-free on three sides, but it still has flushed borders that are barely noticeable.

You have to consider the ViewSonic VA3456-MHDJ’s size since it is an ultrawide monitor. The width can bump off your desktop speakers so some rearrangement might be in order for your workstation or gaming build. It’s not overly heavy at 20.28 pounds, but it is possible for it to get outbalanced away from your hands if you are not careful.

Build quality for the ViewSonic VA3456-MHDJ is solid even if it’s a lower-priced option when compared to alternatives. The plastics used feel thick and sturdy, so it would take some force to cause cracks or flexing. The base looks alarmingly small for the monitor, but it is actually quite stable while its hinge is firm enough to hold the screen up.

What we dislike about the ViewSonic VA3456-MHDJ is it still uses OSD buttons in this day and age. The layout is close to the edge of the bottom at the back so its easy to reach, but it’s still time-consuming to use and prone to errors. This is a minor issue, but it’s an annoyance for users who often change their settings to suit a task or the environment.

The stand included with the ViewSonic VA3456-MHDJ offers tilt, swivel, and height adjustments for your convenience. It’s easy to get a comfortable viewing angle, so most won’t feel the need to upgrade the monitor. You can use a VESA mount, but we feel that its only necessary for multi-display setups or if you have a smaller desk.

Another aspect where the cost-cutting is apparent is its connectivity layout which doesn’t include the usual extras. You get DisplayPort 1.4 and two HDMI 2.0 slots, plus a 3.5mm jack for headphones or speakers. It is lacking a USB-C slot to compete with the premium models we mentioned but having one will raise the price considerably.

The ViewSonic VA3456-MHDJ also includes a pair of built-in speakers with 3 watts of power output. They can’t get loud and are incapable of deep bass for entertainment purposes, but they sound clear enough for background music or conference calls. They can be used as backups, but we know most users already have headsets and desktop sets anyway.

The ViewSonic VA3456-MHDJ boasts a 34-inch IPS panel with a 3440 x 1440 resolution, a 75Hz refresh rate, and a 4ms response time. The backlight has a 400 cd/m2 maximum, while its contrast ratio is listed at 1000:1 like most IPS panels. This model doesn’t have HDR certification, but it is compatible with HDR10 signals so it can translate it as best it could.

34-inch ultrawides have less pixel density than their 27-inch QHD monitors, but they are still crisp with improved details. You get a lot of space to work with while games look more engrossing thanks to the extra peripheral view. 4K is more popular now for high resolution screens, but nothing is better than an ultrawide for productivity and immersion.

The ViewSonic VA3456-MHDJ renders 97% of the sRGB gamut and 74% of DCI-P3 which isn’t the widest coverage, but decent enough for daily use. its default accuracy is better since the deltaE average is only at 2.04 so it’s already color-correct out of the box. Most users won’t need to calibrate this monitor apart from adjusting a few settings like its brightness level for comfort.

Calibrating the ViewSonic VA3456-MHDJ improved its dE average to 1.06 which is excellent for an affordable monitor. It is not as good as some of the results we’ve seen on IPS ultrawides, but it’s already acceptable for content creation. However, colorimeters aren’t particularly cheap so we can only recommend them for those who are into color-critical work.

It doesn’t reach its brightness rating since the backlight only reached 381 cd/m2 at 100%, although that’s plenty even for brightly lit rooms. What’s most disappointing about the ViewSonic VA3456-MHDJ is its contrast which only reached 891:1 at 50% brightness. The screen can’t produce deep blacks, but that’s expected from an IPS display.

Panel uniformity for the ViewSonic VA3456-MHDJ was decent even if there are some tiny backlight leaks at the top edge of the screen. they don’t present a big issue most of the time, but their clouding or halo effects can sometimes become visible in dark scenes. Take note that this can vary between every unit due to the nature of IPS and manufacturing tolerances, so there are better ones out there.

The ViewSonic VA3456-MHDJ has good response time even if it doesn’t have a 100Hz or more. The screen barely shows any blurring, and they only become visible if you scrutinize the screen in dark or contrasting transitions. Setting the overdrive mostly helps in this regard so it is still usable for gaming purposes.

The ViewSonic VA3456-MHDJ is compatible with FreeSync and G-Sync so you won’t get left without VRR. This duality is a must have now since GPUs are scarce or overpriced, so getting a specific model from the two companies might be difficult for some. Its input lag sits at 9ms at 75Hz so it’s still responsive and free from delays.

Thoughts on the ViewSonic VA3456-MHDJ

We think that the ViewSonic VA3456-MHDJ is quite fine for its price considering its good image quality and reliable design. The IPS panel offers great color accuracy out of the box so most users won’t have to bother with calibrating it. We like the simple and functional design, although it clearly lacks some extras which are again, understandable at this price point.

The biggest weakness of the ViewSonic VA3456-MHDJ is its dismal contrast ratio which gave way to poor black luminance. It’s common on most IPS panels, but some manufacturers have produced better products in this regard. However, it’s still an excellent buy for those who want IPS technology without spending close to a thousand dollars.

Search
You are here: Home / Reviews / ViewSonic VA3456-MHDJ Review – Affordable 1440p IPS Ultrawide Monitor for Home and Office
This website uses cookies to improve your experience. We'll assume you're ok with this, but you can opt-out if you wish.Accept Read More
Privacy & Cookies Policy