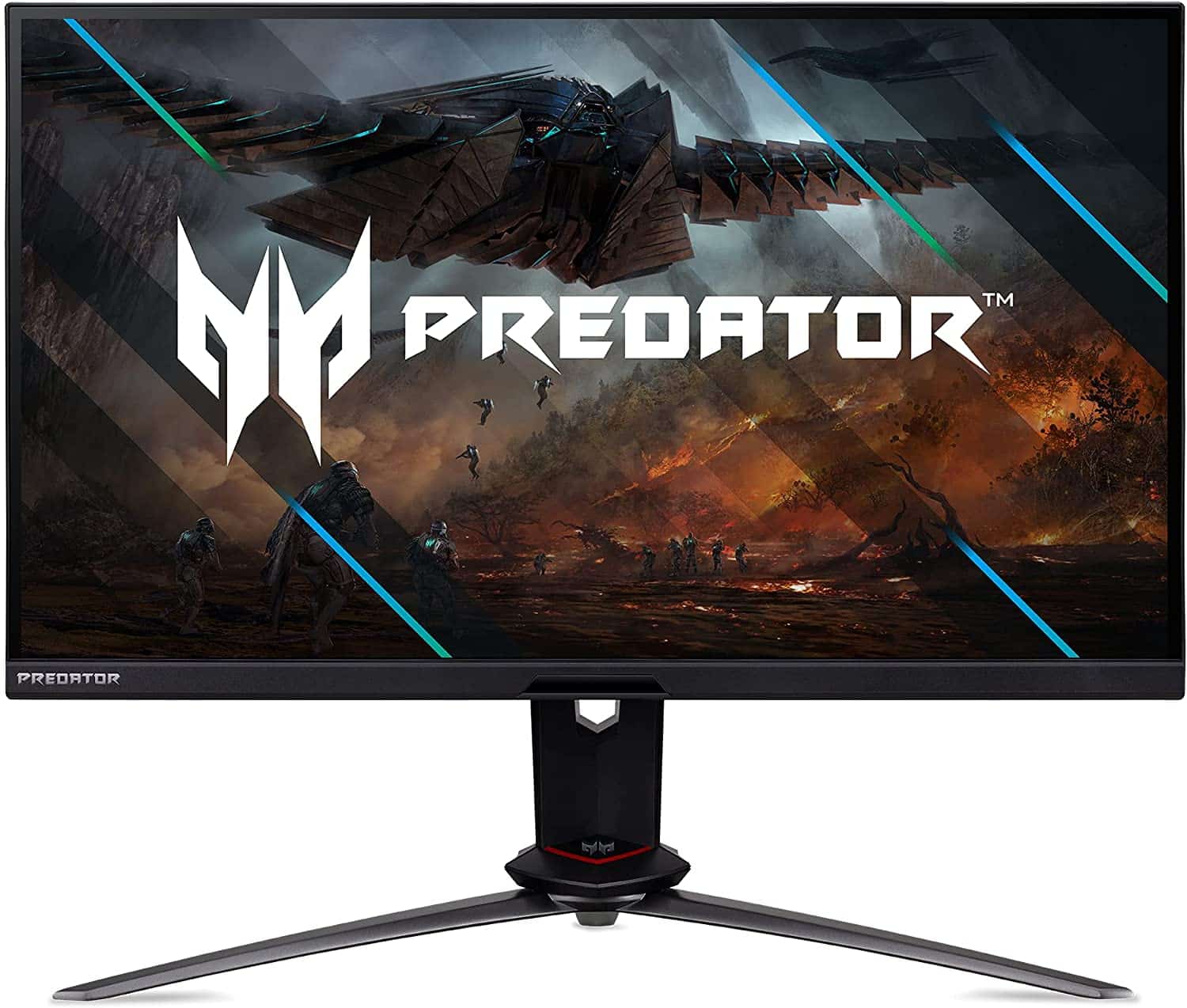 The Acer XB273U NV hits the gaming sweet spot with its overclocked IPS panel, responsiveness, and superb color. It’s priced higher than highly-rated picks such as the Asus VG27AQL1A, but it comes with all the bells and whistles you can expect from a Predator monitor. Let’s check out if the extra cost for the Acer XB273U NV is worth it. 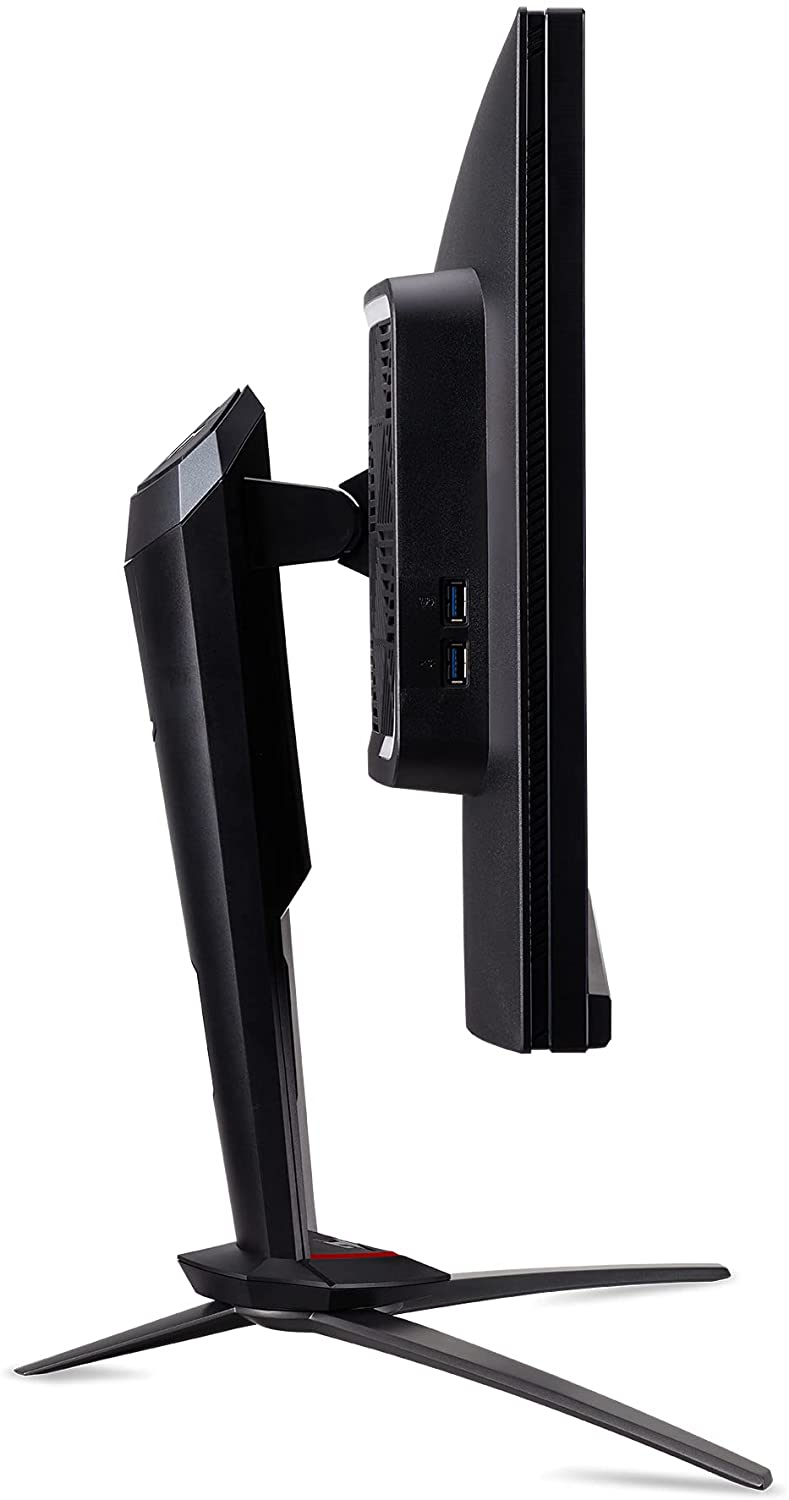 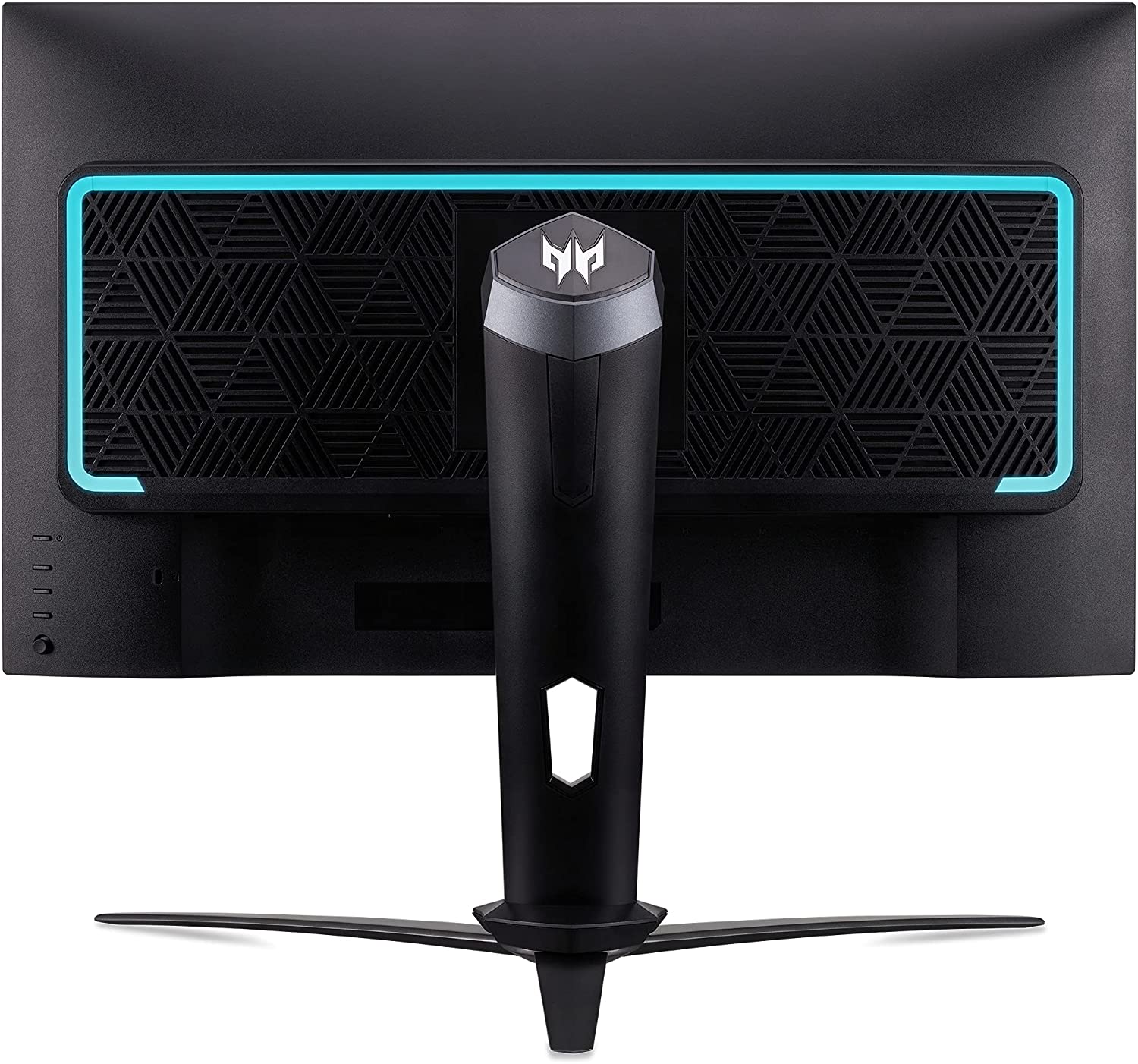 The Acer XB273U NV shares its aesthetic with the XB273U GX which is its upper-tiered 270Hz twin. The monitor has a matte black chassis that’s accented with a gunmetal base and RGB lighting. The display is bezel-free on three sides, although you still get inner borders when it’s in use.

It shouldn’t be too big for most desks, but the Acer XB273U NV is one of the few models in the market that need over a foot of depth. Its base is over-designed, but at least it will keep the monitor upright and stable. It also looks quite good, especially now that it’s less aggressive-looking than its predecessors such as the XB271HU.

Build quality for the Acer XB273U NV is excellent as expected since it is a premium-grade variant. There are no cosmetic defects and the plastics are thick enough to prevent unwanted flexing or cracking after a while. The stand is reinforced so it doesn’t wobble while the hinge for the cabinet is firm enough to prevent sagging. 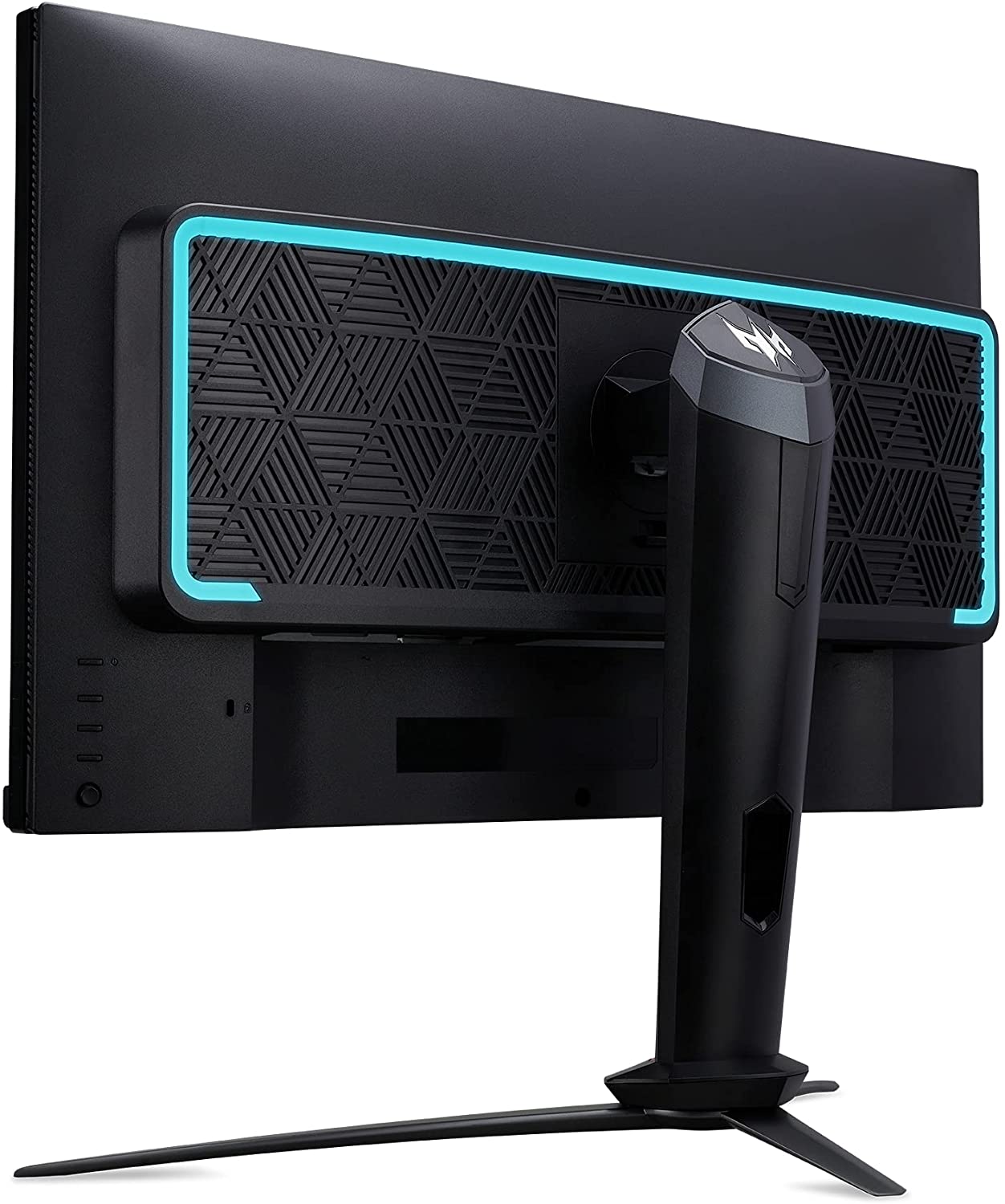 The Acer XB273U NV has, as mentioned, RGB lighting at the back on its rectangular bulge. The strip is arranged in a way that makes the resulting glow look like a halo behind the monitor. The symmetric output of the LEDs enables it to be a bias lighting as well which is very helpful in keeping your eyes comfortable and safe during long gaming sessions.

The Acer XB273U NV’s control layout has a very easy-to-use joystick along with some hotkeys for convenience. The OSD itself is laid out quite well, so users will spend less time tinkering with the monitor to get the perfect setting. Other brands now offer remotes and software-based solutions, but frankly, this is more than enough for us.

The stand included with the Acer XB273U NV offers tilt, swivel, pivot, and height adjustments. you can always get a comfortable viewing angle, along with the freedom to orient it in other ways such as a portrait display on the side. The stand is a bit hefty so some might want to go with VESA mounts instead, but that adds more cost to your upgrade’s total.

This model includes DisplayPort 1.2 and two HDMI 2.0 ports for video inputs, but it doesn’t include USB-C like the XB273U GX. You also get five USB 3.0 ports and a 3.5mm jack for your peripherals which will help with cable management. Note that you need to use DP 1.2 for the 170Hz refresh rate since the two HDMI ports are limited to 144Hz.

You also get a pair of 2-watt speakers with this model, but we think it’s the least premium item on the spec sheet. They sound weak without any semblance of bass and they will easily distort if the volume is high enough. Headsets are still better for entertainment purposes, but the pair can be used for background music or even conference calls in remote work setups.

The Acer XB273U NV sports a 27-inch Fast IPS panel with a 2560 x 1440 resolution, a 170Hz refresh rate, and a 1ms boosted response time. The backlight has a 400 cd/m2 maximum, while the contrast ratio is limited to 1000:1 like most IPS panels. This model is HDR 400-certified, but it has limitations that make it less impressive in HDR performance.

Another reason why this monitor hits the sweet spot is its size and resolution which results in a well-balanced pixel density. You get more space and it looks crisper without sacrificing visibility and legibility. You still need a fairly powerful GPU to get high framerates, but it is considerably less demanding than 4K variants.

The Acer XB273U NV renders 99% sRGB and around 90% DCI-P3 for vibrant colors in games and daily tasks. The default accuracy is impressive as well since the deltaE average is only at 1.36, indicating that it is factory calibrated. Most users will not feel the need to calibrate the monitor apart from adjusting its basic settings such as the backlight level.

Calibrating the Acer XB273U NV with a colorimeter dropped the dE average to an impressive 0.57. This means that it’s highly suitable for editing work as well, although you will need a colorimeter to achieve this manually. However, you don’t need to spend more money just to get a lower average if you are only using it for gaming and general computing.

Its backlight reached 221 cd/m2 in SDR at 100%, but it peaked at 431 cd/m2 when HDR is active. Its contrast ratio is limited to 981:1 at 60% backlight, so it cannot produce deep blacks like better-equipped HDR monitors. it’s not great for HDR gaming due to these limitations, so you have to spend more if you want to enjoy better lighting effects, contrast, and vibrancy.

Panel uniformity for the Acer XB273U NV sample was excellent considering it has an IPS panel. There are no considerable backlight leaks or clouding issues on the monitor, but there is a slight deviation in the backlight’s spread. It is not noticeable during regular use, but do take note that this varies between every unit made.

The Acer XB273U NV is as fast as the best Fast IPS gaming monitors out there when it comes to pixel response and motion handling. It barely shows any blurring or smudging, so you don’t need to max out its overdrive feature. Its suitable for competitive or fast-paced games, and the only better option here will be the 240Hz to 270Hz variants that cost a lot more.

The Acer XB273U NV is a G-Sync monitor which explains its higher price, but it’s still compatible with AMD’s FreeSync. We’re glad that the market is now finished with the VRR exclusivity, especially at a time where GPU supply and pricing are very unstable. Input lag sits at 5ms at 170Hz so there is no need to worry about delays or de-synced instances.

Thoughts on the Acer XB273U NV

The Acer XB273U NV is an excellent gaming monitor choice if you want a capable 1440p screen with plenty of goodies. Its Fast IPS panel works great even if you put it through competitive E-Sports titles, plus its color-accurate out the box. It is also a well-designed Predator monitor that looks cleaner even if it includes some eye candy like RGB on the side.

The only thing going against the Acer XB273U NV is its higher price which is more or less a hundred bucks more versus the competition. It’s also incapable of convincing HDR performance despite all the advertisements and the VESA certification. However, we think it’s a great purchase if you want to upgrade to a 1440p display without needing the most powerful GPU to max out its refresh rate.