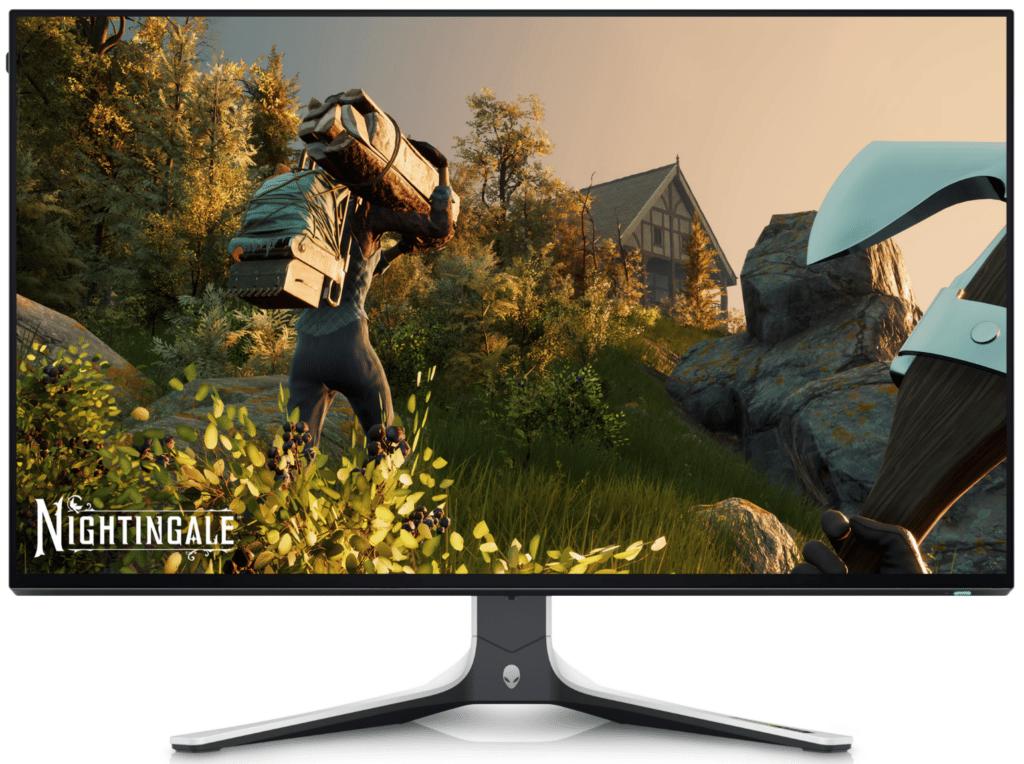 Check Latest Price on the Amazon

The Alienware AW2723DF offers extreme speed and elegant visuals that are wrapped in a premium chassis that will not disappoint. It is intended for E-Sports athletes, so you are getting top-shelf performance and design in a single package. The Alienware AW2723DF isn’t cheap like most 240Hz+ 1440p gaming monitors but let’s check out if it’s one of the few that are worth the investment. 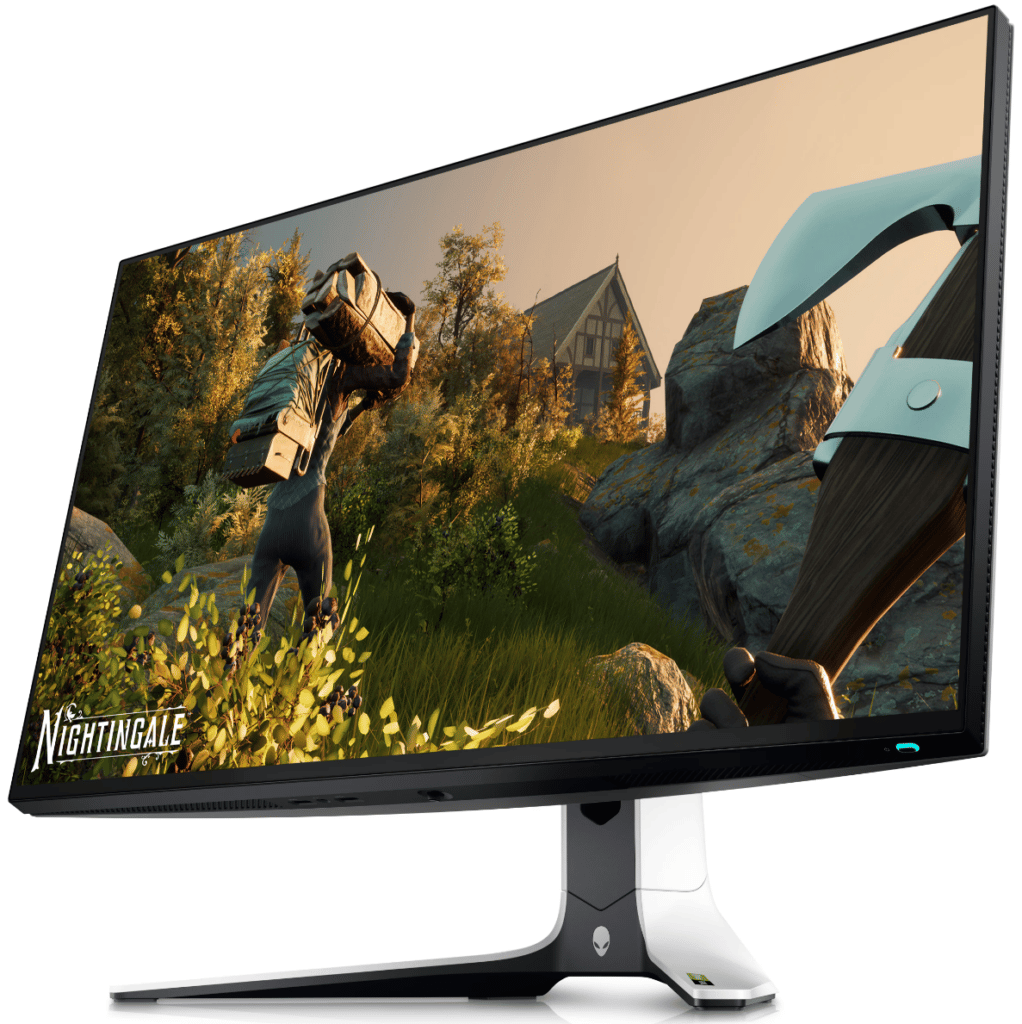 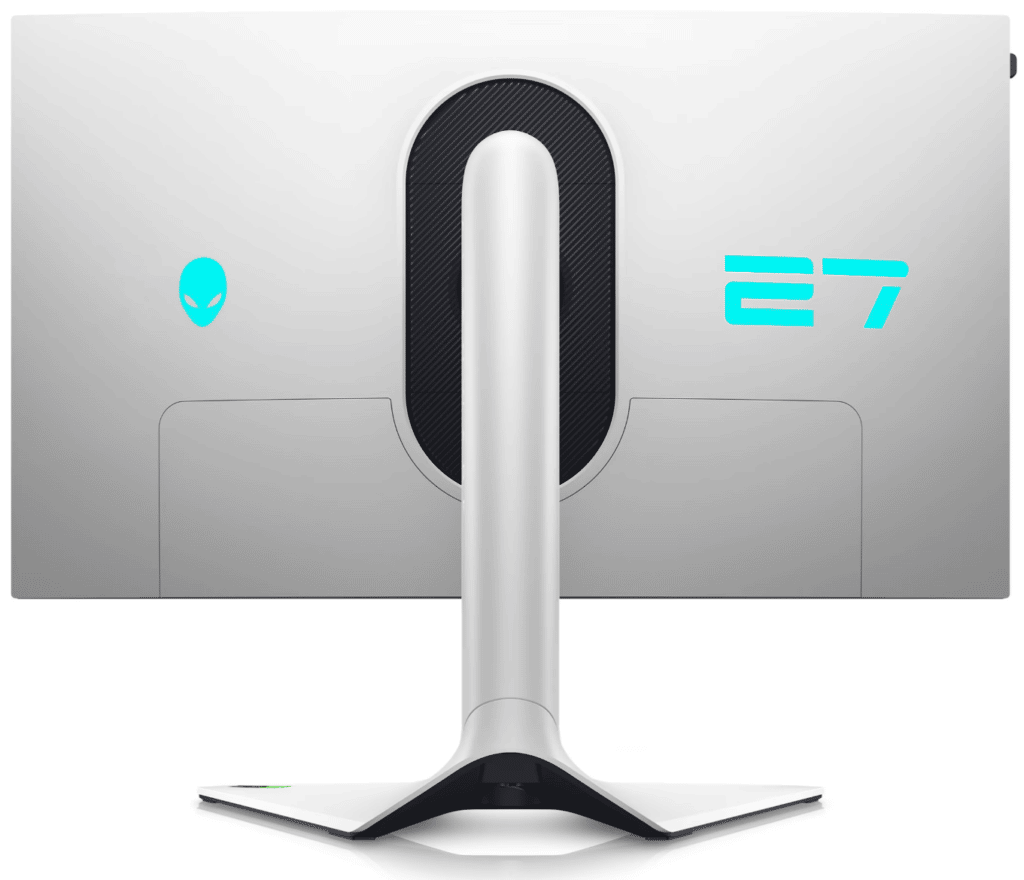 The Alienware AW2723DF sports the brand’s distinct Legend 2.0 design, so it’s in a class of its own when it comes to how it looks. The monitor has a matte white shell and a black chassis so it’s a great centerpiece if you are building a themed setup. The display has an infinity edge design so you only have to deal with minimal borders that are barely noticeable. 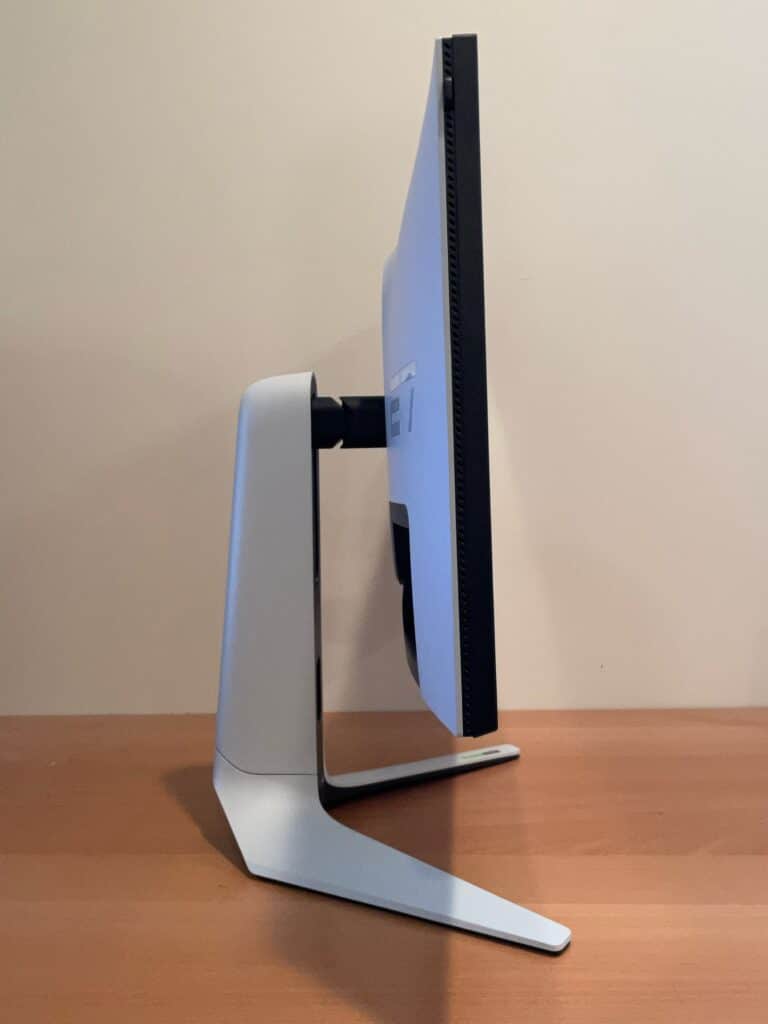 It is not a gigantic monitor, but it’s a meaty build with an imposing stand so you might need to move some pieces around. It needs almost 11 inches of depth but you should be able to work around its base instead of getting rid of it. The monitor weighs 20.59 pounds so it doesn’t feel cheap or fragile if you carry or move it around. 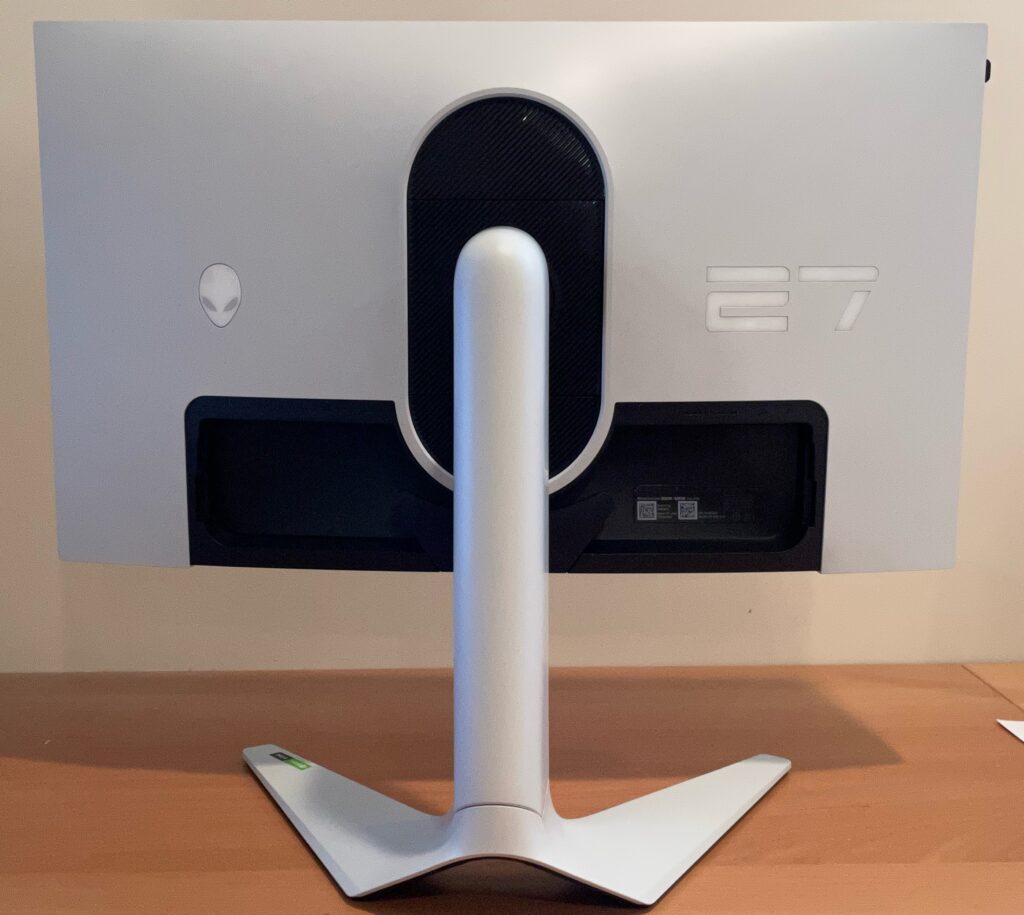 Build quality for this model is excellent just like all the Alienware monitors we reviewed in the past. The plastic panels have that nice matte texture and enough thickness to withstand cracking and flexing. There were no cosmetic defects and that distinct stand is very stable and firm so the screen won’t sag or shake while it’s in use.

Another characteristic you’ll notice of this monitor’s design is its RGB lights and the vents around the chassis. You can only control the lighting with AlienFX so matching it with your other RGB gear that’s not from the company is impossible. However we liked the lighting implementation on the older models since there were more zones, but this isn’t as important as the monitor’s performance.

The stand included in the package offers tilt, swivel, pivot, and height adjustments for your convenience. it is easy to get a comfortable viewing angle with the stock setup so you can avoid neck and eye strain. You can use VESA mounts, but that only becomes necessary in distinct instances like when you have more than one display.

Its connectivity layout includes DisplayPort 1.4 and two HDMI 2.0 slots, but only the DP port will be able to do the full refresh rate. There is also a total of five USB 3.2 ports for peripherals and charging, plus two 3.5mm jacks that are dedicated to speakers and headphones. What is clearly missing is a USB-C slot which should be included for high-end monitors, especially those that have features that were meant for professional use.

The Alienware AW2723DF doesn’t have speakers, but who wants to use built-ins anyway with a monitor like this? It is better served by premium headsets or desktop speakers which will help the gamer focus or get immersed in the games they play. However, we always prefer it if a brand offers more for the user, so we’re hoping for an upgraded set at least for the next iteration.

27-inch 1440p are very popular because they offer the sweet spot between 1080p and 4K variants. The pixel density is just right so the screen doesn’t look too sharp or anything less than crystal clear. It doesn’t eat up a ton of GPU horsepower like 4K screens so that maximum refresh will be reachable in more scenarios. 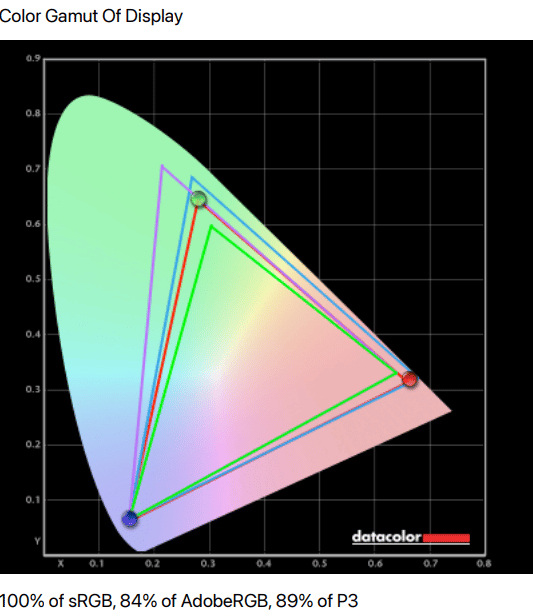 The Alienware AW2723DF renders 100% sRGB and 89% DCI-P3 which was lower than the company’s claims, but natural for most fast IPS panels. However, its default accuracy was all over the place since the deltaE average was quite high at 3.17. What you can do about this is to use its Creator Mode which tightens the dE to 1.45.

The monitor produced an excellent dE average of 0.81 when it was calibrated with a colorimeter. The problem is that you have to buy the gadget separately if you want the same level of improvement from the default setup. Colorimeters aren’t cheap, so we can only recommend getting one if you will use the monitor for color-critical work.

The backlight reached 439 cd/m2 at 100% brightness but it peaked up to 612 cd/m2 when it is HDR mode is active. Its contrast ratio reached 1110:1 at 50% brightness with a little expansion when its backlight peaked. However, it’s clearly missing the benefits of a full FALD backlight, so the HDR effects it can produce are limited. 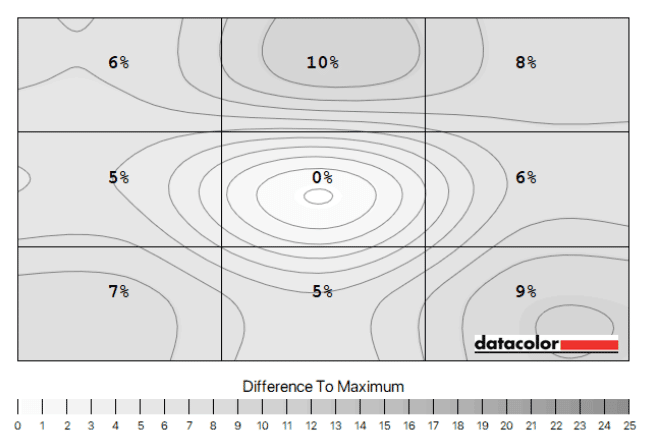 Panel uniformity for the Alienware AW2723DF sample did not have any major issues like backlight leaks or clouding. There were some imbalances in the backlights spread from top to bottom, but it was only noticeable in specific instances. Note that this can change between every unit due to tolerances so there are worse and better ones out there.

One of the best aspects of this monitor is its pixel response time which barely showed any blurring or persistence at max refresh rate. You don’t need to pump up its overdrive to get good results and doing so will only add overshoot. This monitor is great for E-Sports which is currently pivoting to 1440p due to some initiatives.

The Alienware AW2723DF is compatible with both FreeSync and G-Sync so you don’t lose out on VRR and its benefits. We’re glad that Alienware monitors are now non-exclusive to one brand so you can use any GPU from either brand with it. Input lag sits under 3ms at 280Hz, making this monitor one of the fastest we’ve handled in recent times.

Thoughts on the Alienware AW2723DF

The Alienware AW2723DF is a great option if you want to upgrade your competitive or even casual gaming experience. It has a vibrant screen and excellent quality all over, so you can’t go wrong with it even if it is pricey. It’s fast and very responsive, so it’s a great buy if you want to update your E-Sports setup for its future format.

There are still some flaws with the Alienware AW2723DF even if it has a premium price tag. It doesn’t offer superb HDR performance and its default color accuracy is way off unlike the previous offerings. However, it will be an excellent upgrade if you are coming from a 1080p screen with a desire for something sharper and quicker.

Search
You are here: Home / Reviews / Alienware AW2723DF Review – High Speed 280Hz Gaming Monitor with IPS Nano Color Technology – Recommended
This website uses cookies to improve your experience. We'll assume you're ok with this, but you can opt-out if you wish.Accept Read More
Privacy & Cookies Policy