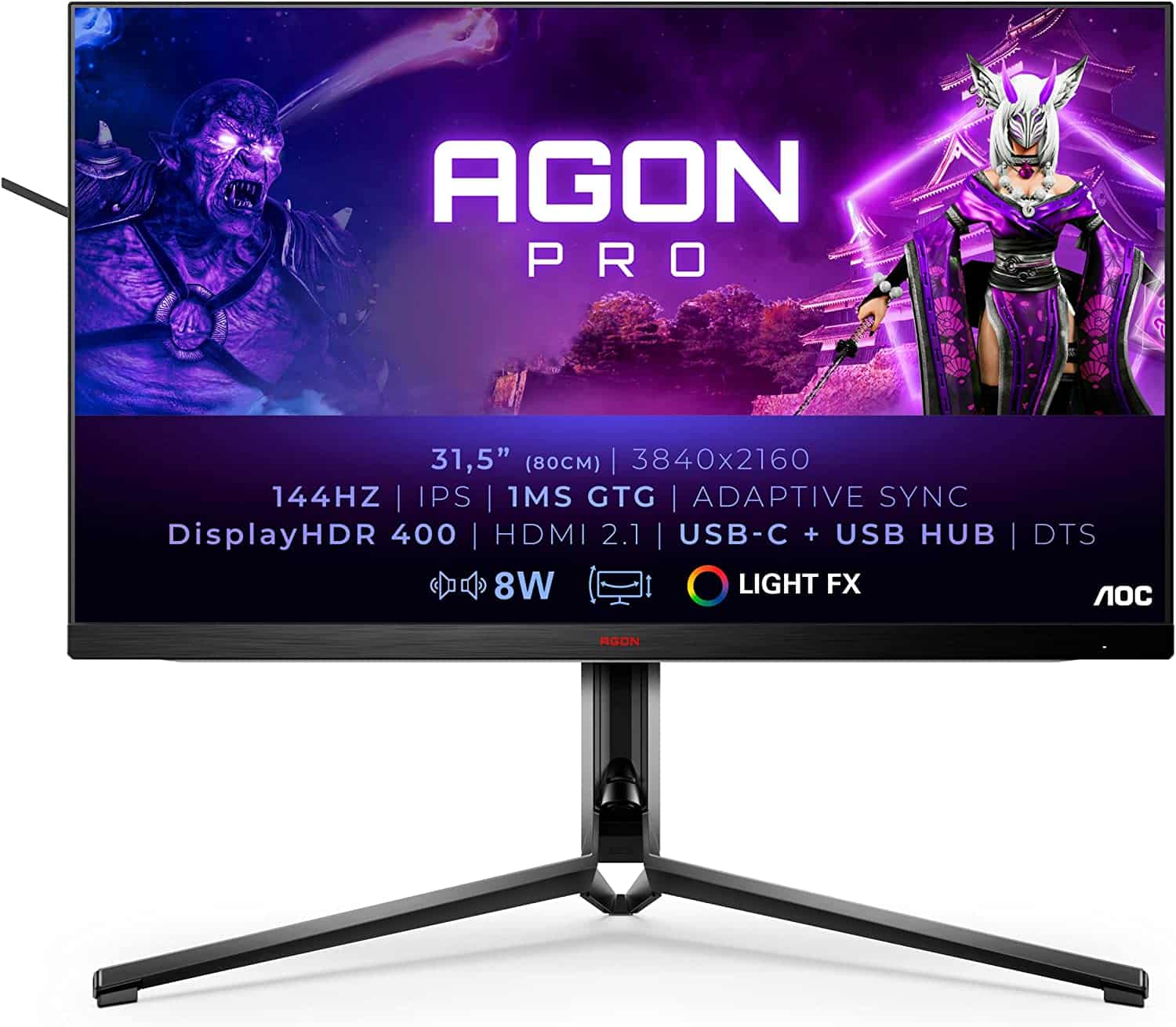 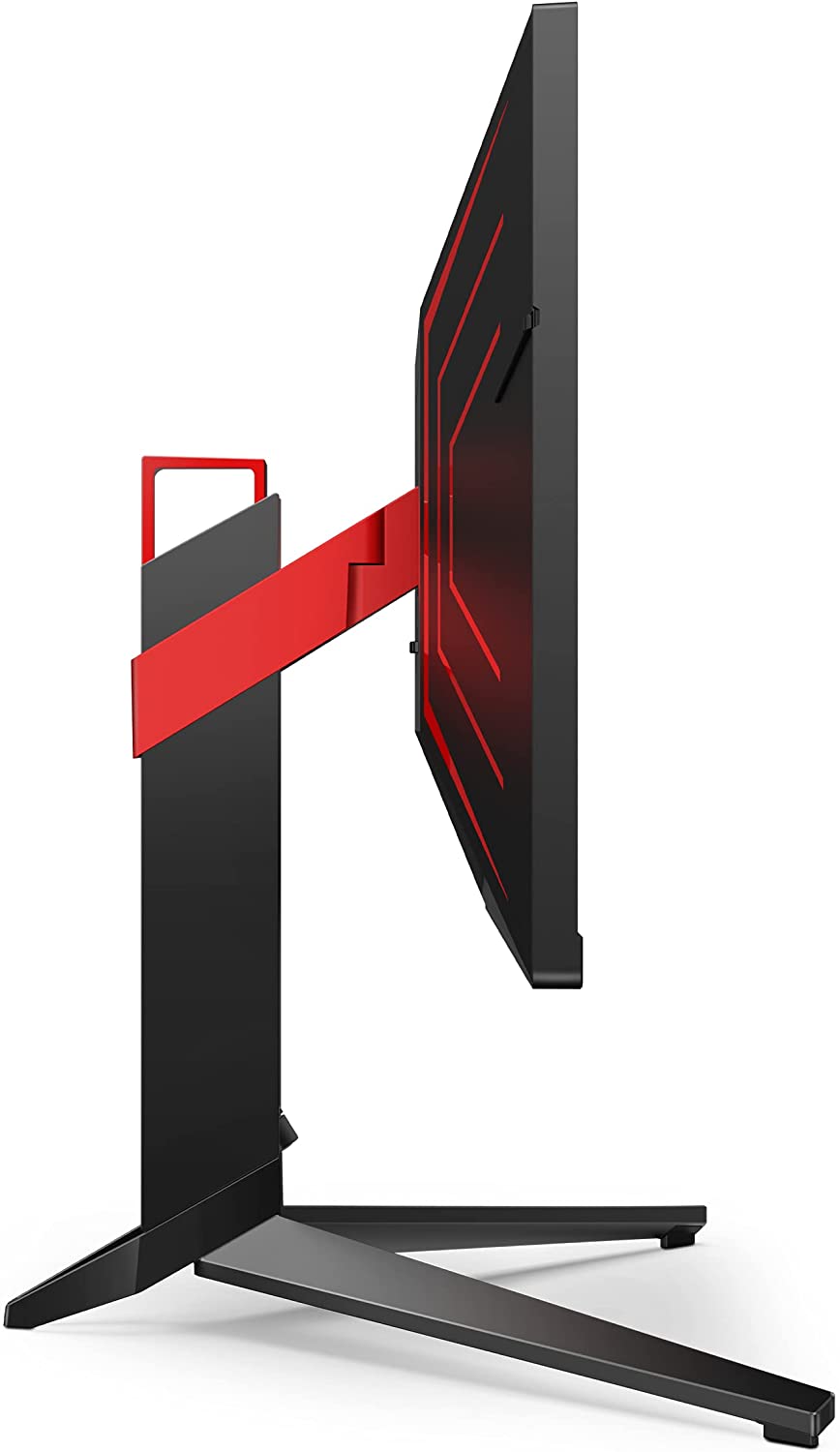 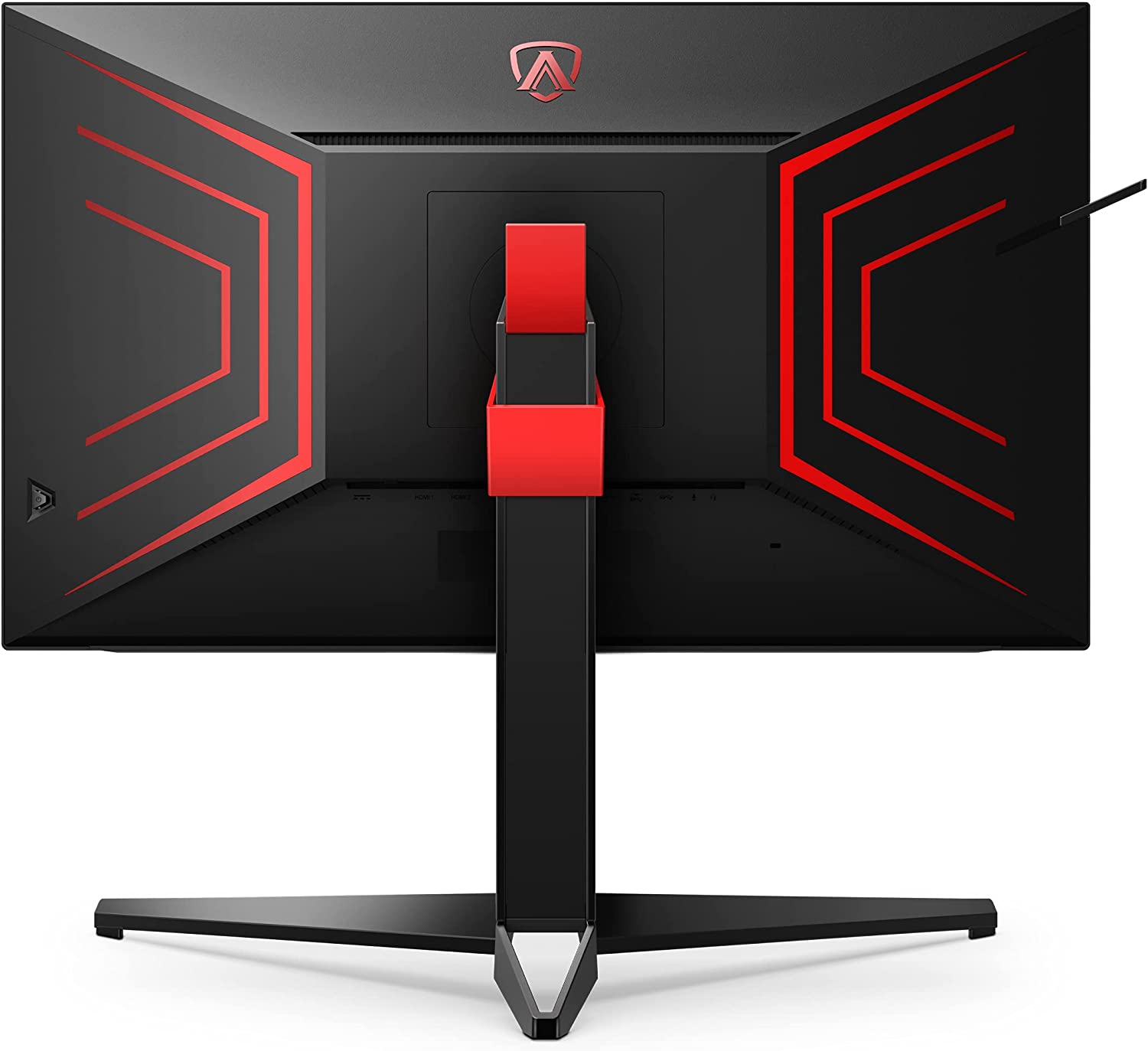 The AOC Agon Pro AG324UX uses a radically new design when compared to the older Agon aesthetic which has been used for a few years now. The monitor has a sleeker appearance with its matte black chassis that’s adorned with aggressive red accents in the right spots. The display is bezel-free on three sides so you won’t feel that the screen is small even if panel borders are still present.

This new model isn’t tiny by today’s standards, but what’s surprising is its imposing stand which needs more than a foot of depth from your desk. Its also heavy at a little over 22 pounds, but that’s understandable since the former is made of metal. You have to make way for this monitor on your desk, but its wide base with a large open area in the middle should be good enough for your peripherals.

You also get amazing build quality thanks to that metal stand along with thick plastic panels that can withstand flexing and cracking. The monitor didn’t show any cosmetic defects and it is every bit a premium gaming monitor once you hold it in your hand. The stand is also firm and stable so the screen won’t sag or wobble while you are in the middle of intense gaming sessions.

The AOC Agon Pro AG324UX has AOC Light FX RGB LEDs at the back and at the bottom edge of the screen. you can control their colors and themes via the OSD or via an app called G-Menu which you have to download separately. The added touch of customization is nice, but it would be better if RGB ecosystems became compatible with each other.

You also get a joystick for the OSD aside from the brand’s G-Menu app which is quite convenient to use. Older Agon monitors had remotes, but it isn’t as useful as it seems unless you adjust your screen settings often. We know omitting the latter helps with the cost of the product, so it’s okay not to have them this time around.

The stand included with the AOC Agon Pro AG324UX offers tilt, swivel, pivot, and height adjustments for your convenience. It is easy to get a comfortable viewing angle and we can’t get enough of its gorgeous metal texture and build quality. The only reason to remove it in favor of a VESA mount is if your desk space is limited or if you have multiple screens for your build.

The connector layout at the back of the monitor is what we like most about its physical features since everything needed plus more are there. You get DisplayPort 1.4 with DSC and two HDMI 2.1 ports for 4K 144Hz and 4K 120Hz on PC and next-gen consoles like the PS5, respectively. You also get a 90-watt USB-C slot that can charge high-spec USB-C laptops while it’s crunching the numbers.

You also get four USB 3.2 slots and a 3.5mm jack for headphones, KVM functionality, and a pair of 8-watt DTS speakers. The latter can get decently loud, but it still lacks the necessary bass for intense games and movies. However, it is nice to have useable extras for secondary use, such as listening to background music or conference calls.

The AOC Agon Pro AG324UX boasts a 32-inch IPS panel with a 3840 x 2160 resolution, a 144Hz refresh rate, and a 1ms boosted response time. The backlight has a 400 cd/m2 maximum while the contrast ratio is listed at 1000:1 like most IPS panels. This model is certified for HDR 400, but it’s one of the rare few with 16 local dimming zones for better performance.

4K is more suited for 32-inch screens compared to 27-inch variants since the pixel density isn’t too tight. It is not too straining to read walls of text and process documents, but the extra pixels and the sharpness and level of detail they offer are still appreciable. The only downside with 4K monitors is their need for high-end gear if you want to ensure high framerates in modern games.

The AOC Agon Pro AG324UX renders 100% sRGB and around 90% DCI-P3 for rich colors in games, and movies. However, its default accuracy isn’t so good since the deltaE average hit as much as 3.67, so some colors may look off. This is common with monitors that have comprehensive coverage over different gamuts, but there are some factory-calibrated options out there.

Calibrating it reduced its deltaE average to 1.45, which is acceptable for a premium monitor. It is not a prosumer-level result, but most color errors are already invisible at this point. The downside is you need the help of a colorimeter to correct the deviances, and they aren’t cheap, so we recommend tinkering with it first before buying the gadget.

The AOC Agon Pro AG324UX’s backlight reaches 366 cd/m2 in SDR and 405 cd/m2 when its HDR is active. Its contrast ratio is at 50% brightness 1003:1, but this model has local dimming, expanding it to around 4305:1 when its HDR mode is active. This performance is rare for an HDR 400 monitor, but remember that it has local dimming, which improves its output over those without it.

That same local dimming feature looks like it affected panel uniformity, so some scenes, particularly dark ones, might have some visible deviances. Some backlight leaks also had a hand in this, but that’s expected from an IPS panel. Note that this could vary between every unit, so there are better and worse monitors out there.

The AOC Agon Pro AG324UX has an excellent pixel response time thanks to the advancements in IPS technology. You don’t need to max out its overdrive to achieve blur-free performance since there are barely any, to begin with anyway. The monitor works great for competitive play so your problem lies with which GPU to use to reach 144Hz in 4K.

What’s great about these new high-end monitors is that they are compatible with both FreeSync and G-Sync. You don’t have to stick with one GPU brand to guarantee VRR functionality, so it’s a good investment for years to come. Input lag sits at 5ms at 144Hz, so there is no need to worry about delays while gaming.

The AOC Agon Pro AG324UX is an excellent upgrade if you consider its performance and its features. The IPS panel offers great gaming performance, although it could use a bit of factory calibration to fix the default output. It looks great, and it has sought-after features like its 90-watt USB-C port, which makes it even more flexible.

However, the AOC Agon Pro AG324UX isn’t the cheapest in its class so you have to spend extra if you want its features. We think it’s still a fair price for what you are getting, but it’s not something for the masses. It’s a must-have if you have the latest consoles, laptops, and a powerful gaming PC, but you have to spend a pretty penny to get it.

Search
You are here: Home / Reviews / AOC Agon Pro AG324UX Review – Premium 4K 144Hz Gaming Monitor with HDMI 2.1 and USB-C
This website uses cookies to improve your experience. We'll assume you're ok with this, but you can opt-out if you wish.Accept Read More
Privacy & Cookies Policy