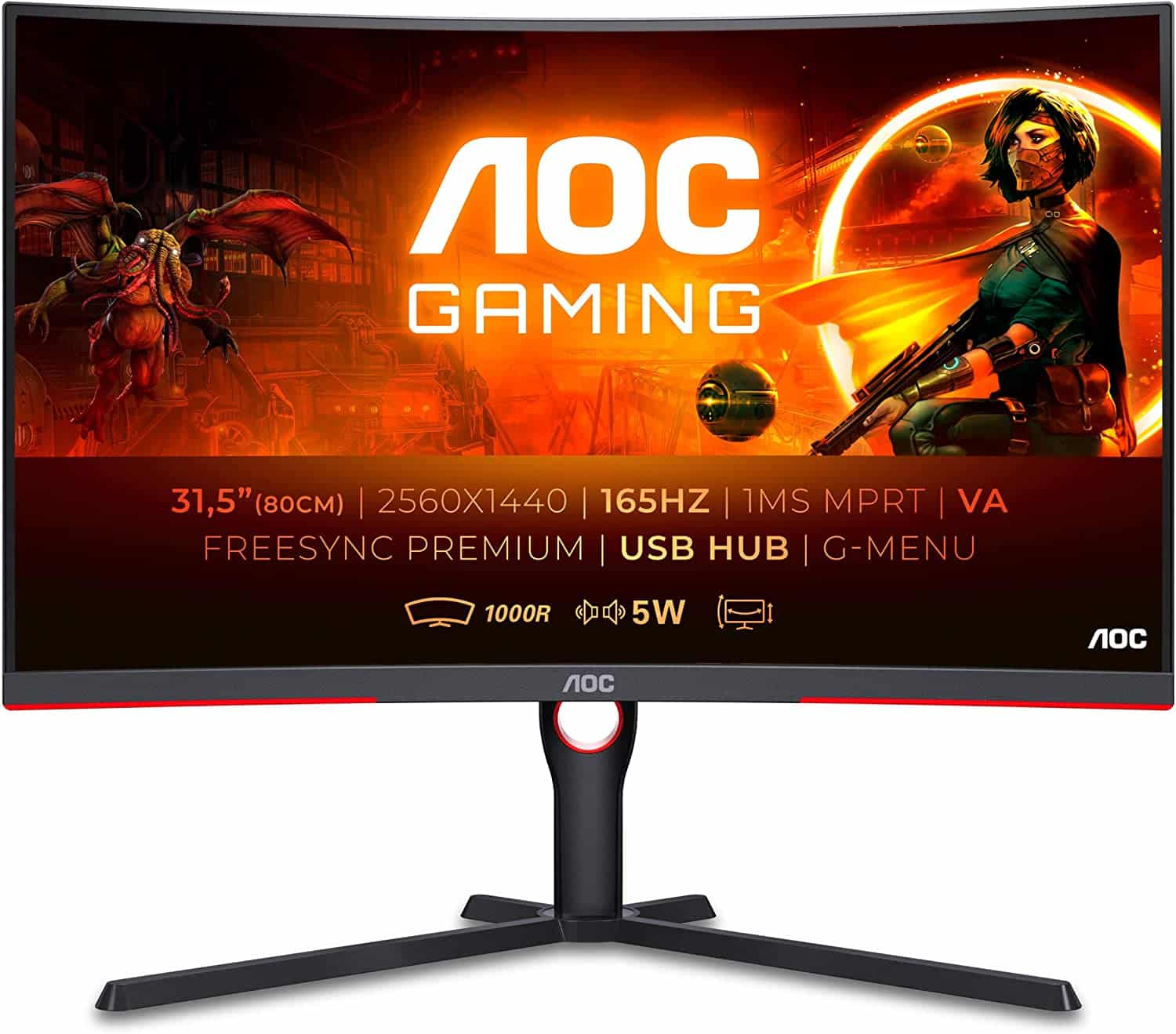 The AOC CQ32G3SU is a reasonably-priced alternative to the Samsung Odyssey variants for those who want a large and immersive screen. it has a steep 1000r curvature which enables the large screen to wrap around your peripheral view. Let’s see if the AOC CQ32G3SE is as good or better than its premium counterparts just like the previous models from the G2 lineup. 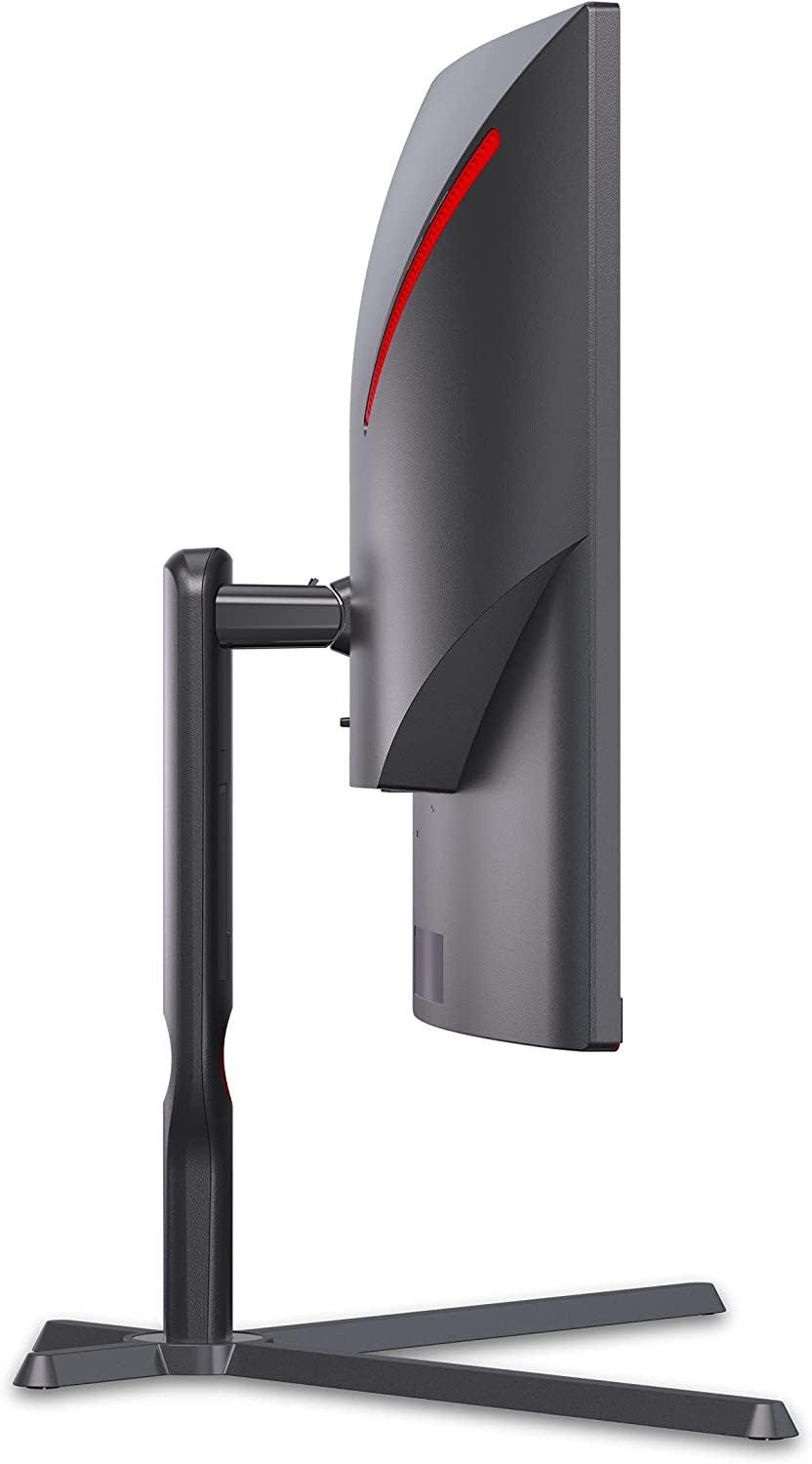 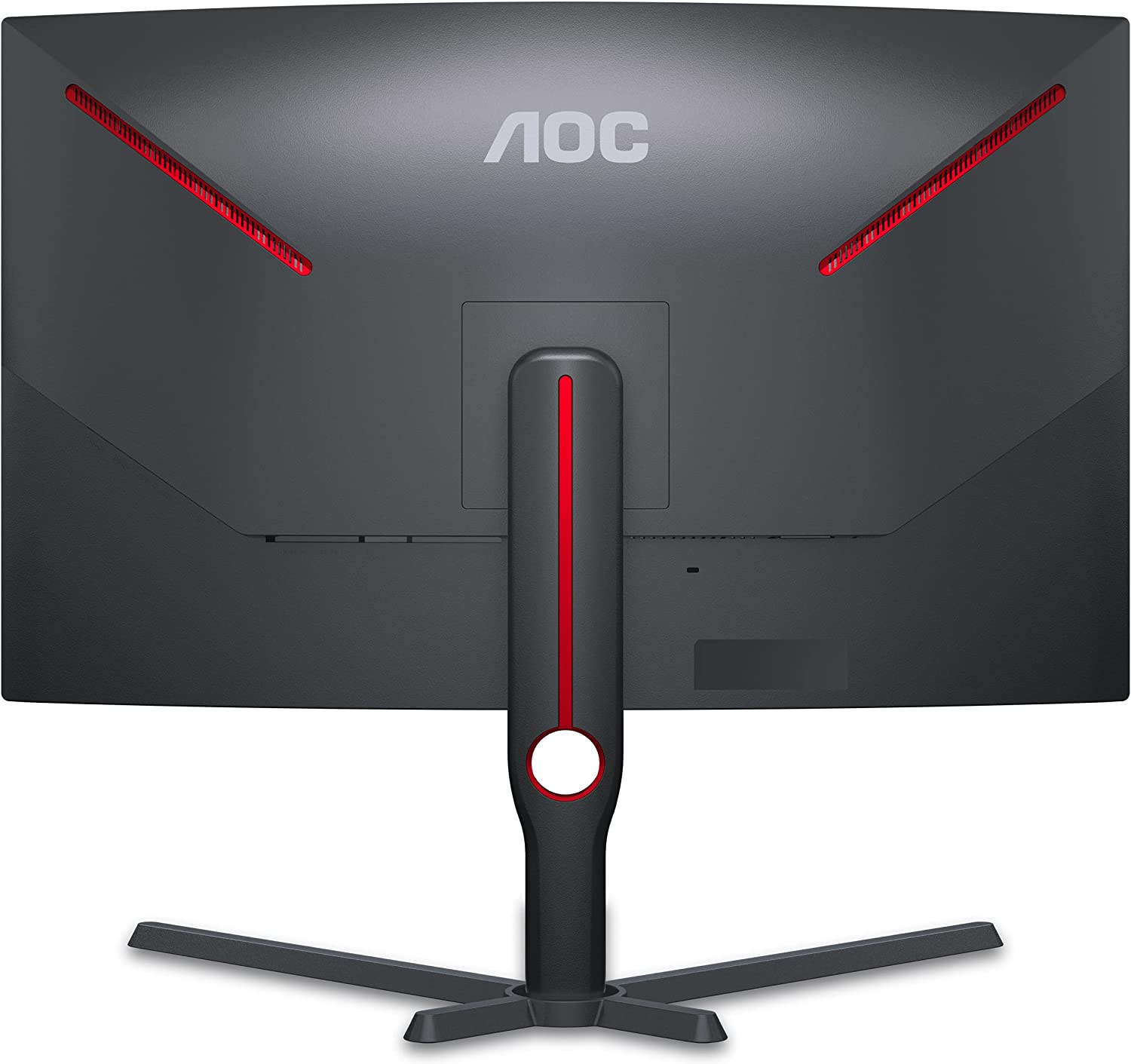 The AOC CQ32G3SU sports a refreshed and more mature aesthetic which we think is better than its predecessors. It retains the same matte black aesthetic with red accents in the right spots, but it is noticeably cleaner looking and less aggressive than the G2 series. The display is bezel-free on three sides, but you will still see inner borders if you look close enough.

You have to keep the monitor’s size in mind since it’s more or less twice as big as the usual variants you will find at school or in the office. It needs more than a foot of depth and its width might shove off your big desktop speakers if you have a narrow desk. It’s not too heavy, but it is wise to ask for help in setting it up to avoid accidents since it’s quite big.

Its build quality is great even if it’s a value-oriented product, so you shouldn’t think any less of its physicalities compared to its premium alternatives. The plastics used are thick and sturdy, and we didn’t see any cosmetic defects when the monitor was unboxed. The stand can hold up the weight quite well, although there is a slight wobble if you nudge it accidentally.

One thing that went backward with the AOC CQ32G3SU is its OSD control layout which went with buttons instead of a preferred joystick. The keys are located under the bottom bezel so they are accessible, but it takes a bit more time and effort. Thankfully, you can use AOC’s G-Menu with this monitor, but you have to download it manually from the website.

The stand that’s included in the package offers tilt, swivel, and height adjustments for your convenience. Pivoting is absent since curved displays aren’t ideal for curved displays and it’s a bit too big for that purpose. You can use VESA mounts, but it’s only entirely necessary if desk space is limited or if you have multiple displays.

The AOC CQ32G3SU has plenty of connectivity options for most setups but it lacks a few modern ports. You get DisplayPort 1.4 and HDMI 2.0, along with four USB 3.2 connectors and a 3.5mm analog audio jack. We’d like to see USB-C for productivity, although adding it will raise the price and break the value-oriented proposition of the product.

It also has a pair of 5-watt speakers that can get decently loud enough for basic uses. It can’t provide the necessary bass for some oomph in games and movies, but it’s a decent secondary for tasks such as conference calls. However, an immersive monitor like this is better served by headphones or surround speakers so you can enjoy all the game has to offer.

32-inch 1440p monitors are less crisp, but the extra space and pixels are still present and a noticeable improvement. You get more room to maneuver and games still look cleaner and sharper even if the pixel density is lower. Visibility is also slightly better than the 27-inch variants since text and other small objects look bigger without scaling.

The AOC CQ32G3SU renders 100% sRGB and around 90% DCI-P3 for excellent vibrancy in games and movies. its deltaE average out of the box is at 1.97 which is excellent and in line with the company’s claims. This model is factory-calibrated unlike many other gaming variants, and that’s a big plus for enthusiasts.

Calibrating it reduced its deltaE average to 1.06 which is better, but not a massive improvement for games and movies. Doing this enables the monitor to perform well for more professional tasks, but its curve might get in the way of that. It’s also impractical to buy a colorimeter to make a gaming monitor more accurate, so you’re better off using its sRGB filter or buying a prosumer variant instead.

Its backlight reached 320 cd/m2 which is above the specification while its contrast reached as much as 2488:1 at 60% brightness. That’s not the highest we’ve seen, but it already enables deep blacks and excellent grayscale performance. it’s nice to use this monitor at night due to that, but it can also fight off some glare in well-lit rooms or areas.

Panel uniformity for the AOC CQ32G3SU sample had some backlight bleeding issues on the top and bottom edges of the screen. You won’t see the resulting clouding or blooming in full-color scenes, but an all-black or dark image will reveal them. This is common on curved displays, but there are better units out there since not all panels are made equal.

The AOC CQ32G3SU has a slower pixel response time so it’s prone to some blurs and ghosting in fast-paced and contrasting transitions. You need to utilize its overdrive to reduce some of those issues, although you won’t get rid of all of them. Only the medium level is usable since the strong option adds a bit of overshoot which can become annoying if you are sensitive enough.

The AOC CQ32G3SU is compatible with both FreeSync and G-Sync so you can always utilize VRR with any GPU. This duality is nice to have now since the GPU market is unstable so stocks and prices are going up and down. Input lag sits at 5ms at 165Hz, so there is no need to worry about delays while gaming.

Thoughts on the AOC CQ32G3SU

The AOC CQ32G3SU is a great pick if you want a large and curved monitor for immersive gaming. It is pre-calibrated so it’s good to go out of the box, but you can also tweak it to make it usable for some editing work. The best thing about it is its affordable so it makes big screens with good qualities accessible to the masses.

There isn’t a lot to complain about with this model, but you do have to take some of its quirks into consideration. It’s prone to blurring even if you use its overdrive and the curve might not sit well with everyone. However, it’s still an excellent buy if you want a large gaming monitor that provides an upgraded visual experience.

Search
NEW
POPULAR
You are here: Home / Reviews / AOC CQ32G3SU Review – Affordable 165Hz 1440p Gaming Monitor with 1000r Curvature
This website uses cookies to improve your experience. We'll assume you're ok with this, but you can opt-out if you wish.Accept Read More
Privacy & Cookies Policy