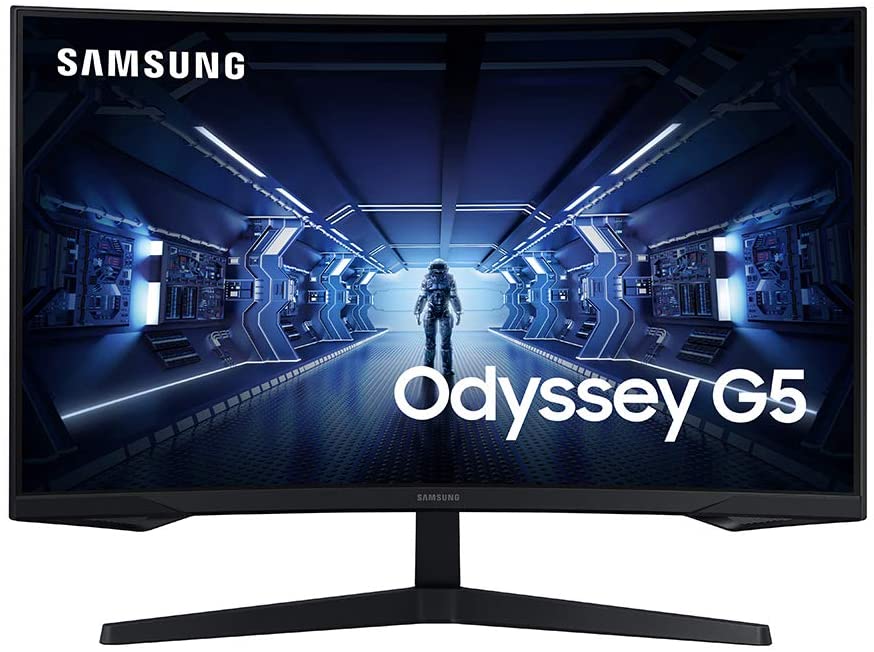 The 32-inch Samsung Odyssey G5 offers a large, high-refresh screen with a deep 1000r curved for extreme immersion. It’s an affordable alternative to the G7 series monitors, but it only goes up to 144Hz and is more or less half the price. It’s also competing with value kings like the Gigabyte G32QC, so let’s check out if it’s the must-buy option that comes out on top. 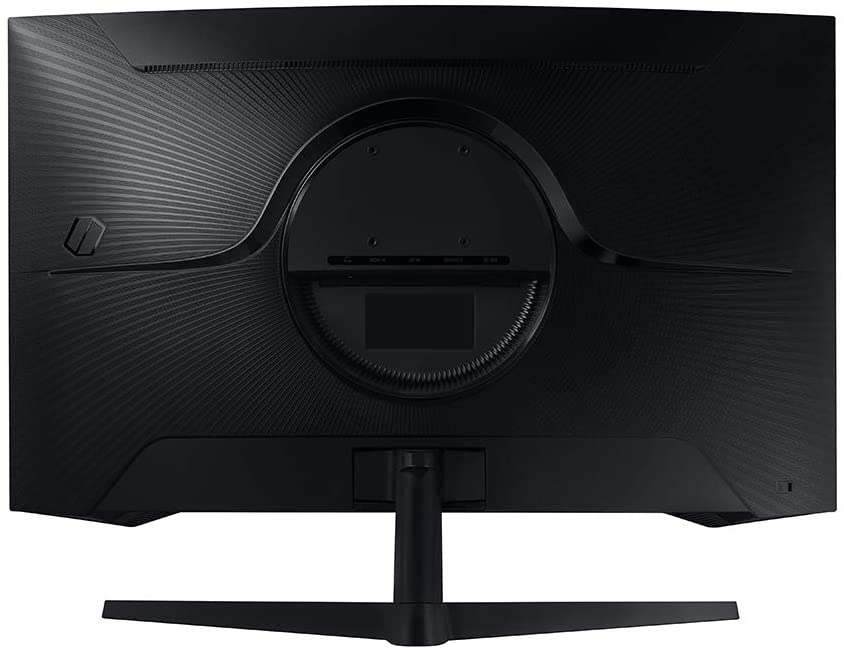 The 32-inch Samsung Odyssey G5 looks identical to its smaller sibling in every way except in its dimensions. The monitor has the same matte black finish with a swirling carbon-fiber texture on its shell which gives it a high-end appeal. The display isn’t bezel-free, but the borders look thin anyway at this size, so they are mostly unnoticeable.

You have to prepare your desk for the Samsung Odyssey G5 LC32G55T since it is quite big in terms of width and depth. The monitor’s stand needs almost 11 inches of depth, and its base has a wide reach that can interfere with your small peripherals line up above the keyboard. It’s not heavy at 12.6 pounds, but it will be awkward to move around due to its general shape and size.

Build quality for the 32-inch Samsung Odyssey G5 isn’t that much different from the smaller variant since they use the same design. The monitor is made out of plastic, but the panels used are thick enough to withstand flexing and cracking. The monitor has a slight wobble as well since its attachment point is quite low, but it only becomes annoying if you type heavily or if you nudge the screen accidentally.

You also get a single joystick with the Samsung Odyssey G5 LC32G55T that controls all its functions, including turning it on and off. The knob is quite big and it’s located just under the bottom bezel, so you won’t struggle with manipulating the OSD. Samsung has been doing this for many of their monitors in every price bracket and we wish other brands would follow as well.

The massive stand on the Samsung Odyssey G5 LC32G55T only offers tilt, so it feels somewhat limited if you reposition quite often. It’s also acceptable since you only have to sit at dead-center to enjoy the curve’s benefits, except if you are extra tall and the display sits a bit low. You can opt for VESA mounts instead, but that adds more cost to your upgrade if you don’t already have one at home. 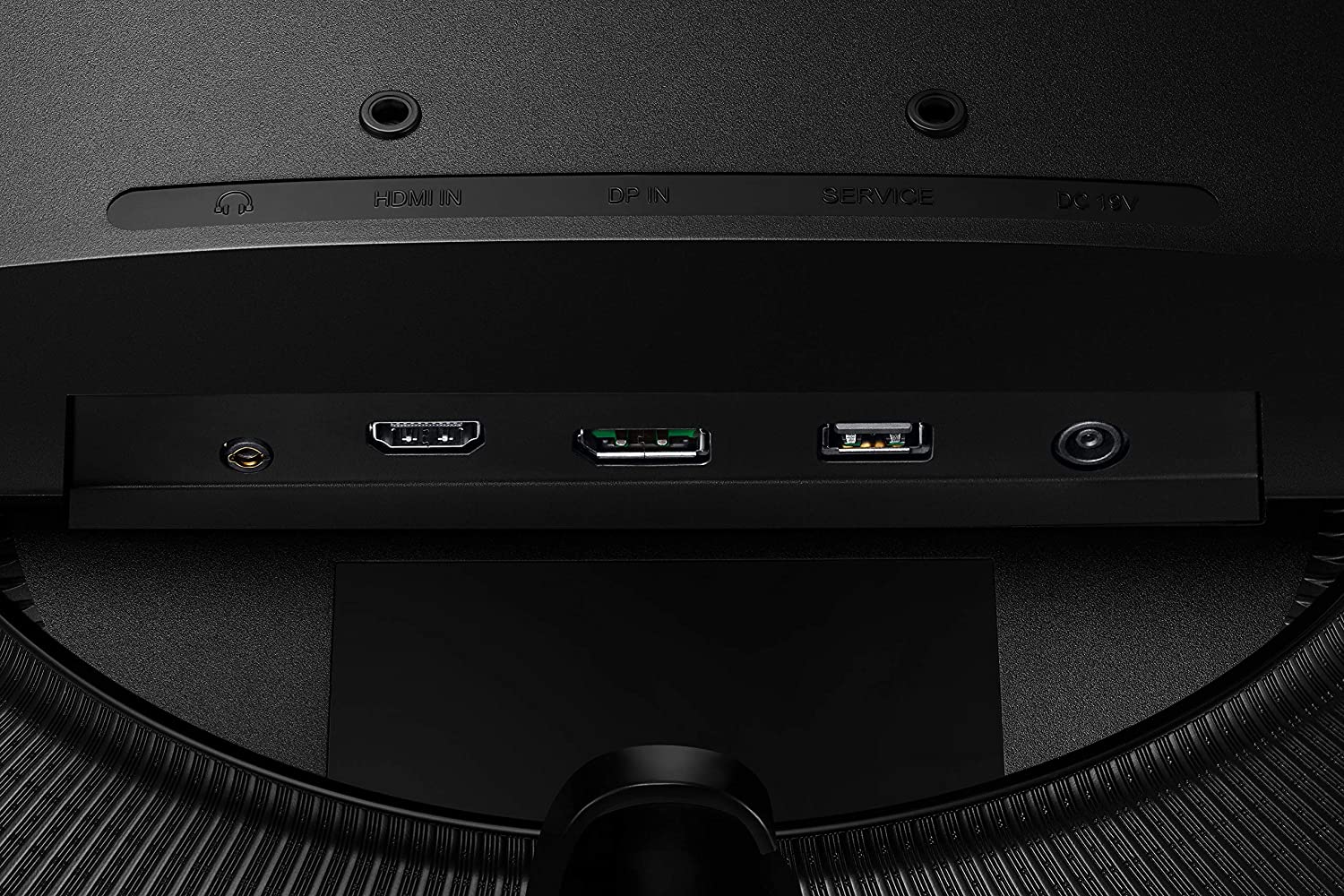 The connectivity layout for the Samsung Odyssey G5 doesn’t include much since it only offers a slot each for DisplayPort 1.2 and HDMI 2.0. that’s enough for a PC and a console so it’s fine, but we’d love to have at least another HDMI slot to cover other secondary devices as well. You will also see a 3.5mm jack for headphones, but there are no usable USB ports.

The Samsung Odyssey G5 focuses on having a low price, so naturally, it doesn’t have a pair of speakers with it. That’s fine since headsets will be better for immersive gaming anyway and you won’t be able to get desktop speaker quality from built-ins. It’s nice to have them as backups, but it’s an understandable omission at this price point.

The Samsung Odyssey G5 boasts a 32-inch curved VA panel with a 2560 x 1440 resolution, a 144Hz refresh rate, and a 1ms boosted response time. The backlight is limited to 250 cd/m2, while the contrast is modestly listed at 2500:1. This model doesn’t have fancy HDR features like the G7 and G9 variants, but it supports HDR signals and translates it as best it could.

1440p in a 32-inch screen won’t be as sharp as the smaller variant, but it’s still more detailed since the extra pixels are there. 4K is arguably better at this size, but this will be easier on your eyes for extended hours of productivity. It’s also easier to get high framerates with this model but remember that it will still require a lot of GPU power for modern games.

The Samsung Odyssey G5 also covers 99% of the sRGB gamut just like its smaller variant. However, color accuracy is only slightly better since the deltaE average when uncalibrated is at 2.71. It isn’t perfect, but it’s difficult to notice the differences and it’s good enough for daily use and gaming.

Calibrating the Samsung Odyssey G5 lowered its dE average to a more appealing 1.52, but you need to enlist a colorimeter to improve it by that much. Most users should be happy with a few minor tweaks for games and movies, but those who want to use it with some editing work need to look elsewhere. Colorimeters are more accessible now in the market, but they aren’t cheap and impractical if you plan to get them and use them for a budget model.

The Samsung Odyssey G5 can reach as much as 299 cd/m2, while its contrast reached 2656:1 at 60% backlight. It doesn’t have the capabilities to show an enhanced HDR output, but these scores aren’t bad for a budget monitor. Dark scenes look murky and colored images are richly saturated even if you use the monitor at night.

Panel uniformity for the Samsung Odyssey G5 could be better since there are some backlight leaks on the top edges. They become noticeable in dark scenes or when the monitor is powering up, but full-color images aren’t affected. We’ve seen this issue on many curved monitors, but thankfully, not every unit made is affected by it.

The Samsung Odyssey G5’s pixel response time is decent even if it’s bound by the limitations of VA panel technology. Blurs and persistence are kept at a minimal at 144Hz with the monitor’s overdrive set to its Faster setting. However, maxing it out to try and remove the leftover smudges will only result in overshoot, so it isn’t recommended.

The Samsung Odyssey G5 LC3255T is a FreeSync model, but it also works with Nvidia’s G-Sync Compatible mode. This duality is nice to have since both companies have compelling GPU options for high-refresh 1440p gaming. Input lag sits at 5ms at 144Hz, so there is no need to worry about delays while enjoying your favorite titles.

The Samsung Odyssey G5 is unbelievably affordable for a large 144Hz screen that’s great for immersive gaming. Its imaging scores aren’t perfect, but it can provide excellent contrast and decent color quality. It’s not as sophisticated as the G7 variants, but that’s ok since it costs considerably less and is easier to find in stock.

However, the deal-breakers with the Samsung Odyssey G5 start with its stand and very limited connectivity features. Again, it’s an affordable monitor, but its closest competitors already have a better spec sheet at more or less the same price. it’s a great budget buy if you are after a bigger screen more than anything, but make sure that you will be able to live with its given limitations.