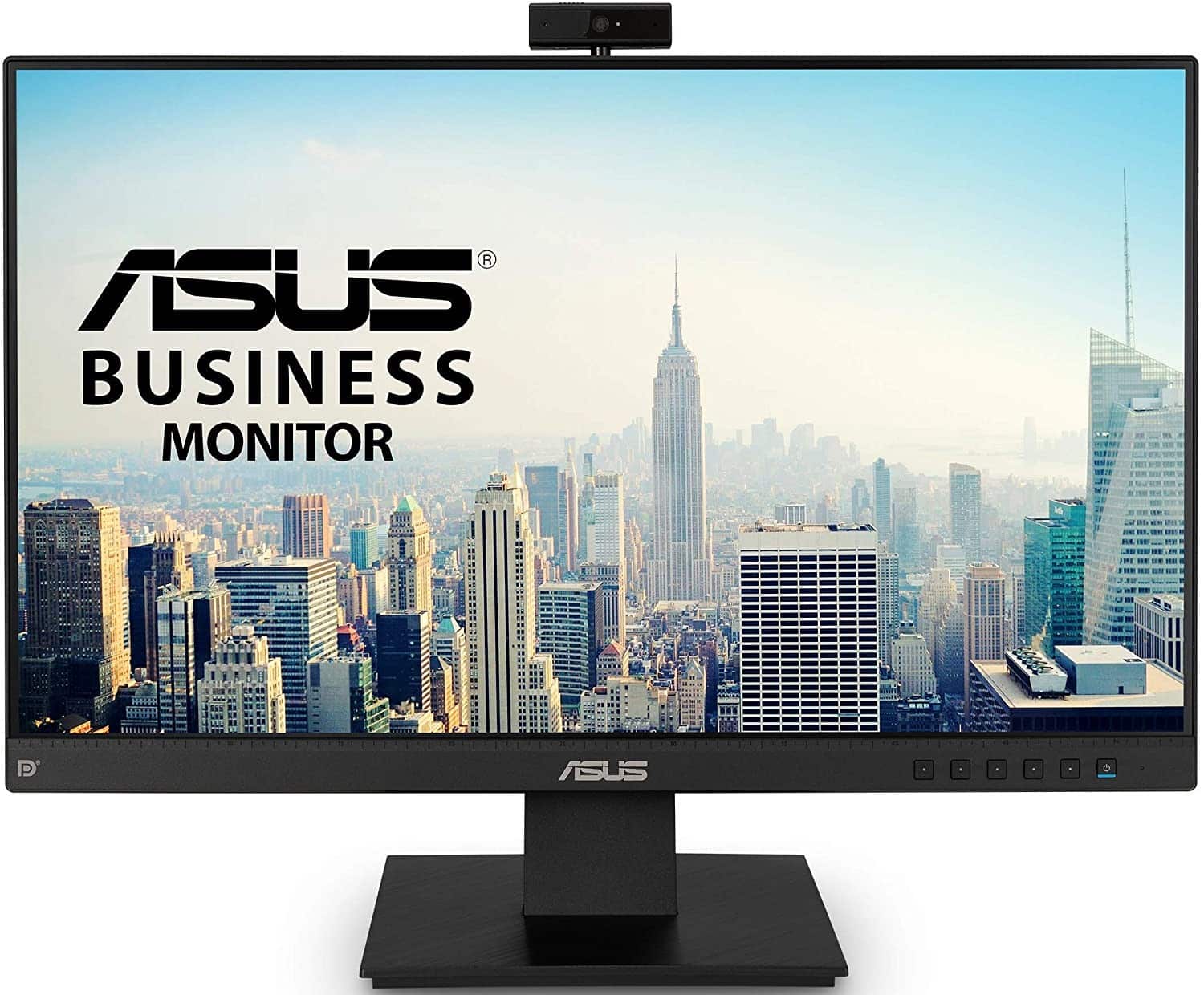 The Asus BE24EQK is mostly just like any other office monitor, but it carries features that were designed for work from home use. However, it seems that it sacrificed a few essential features to help lower the price point. Let’s see if the Asus BE24EQK excels in imaging performance which matters the most. 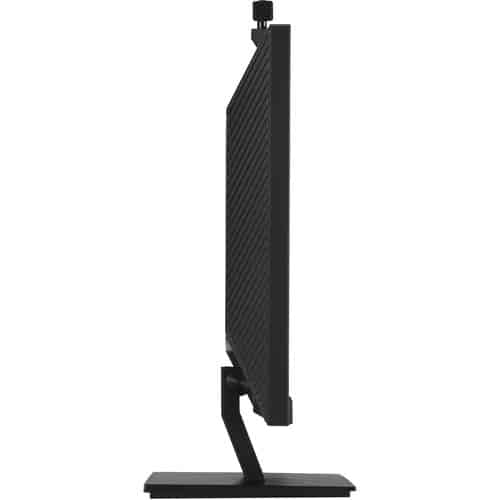 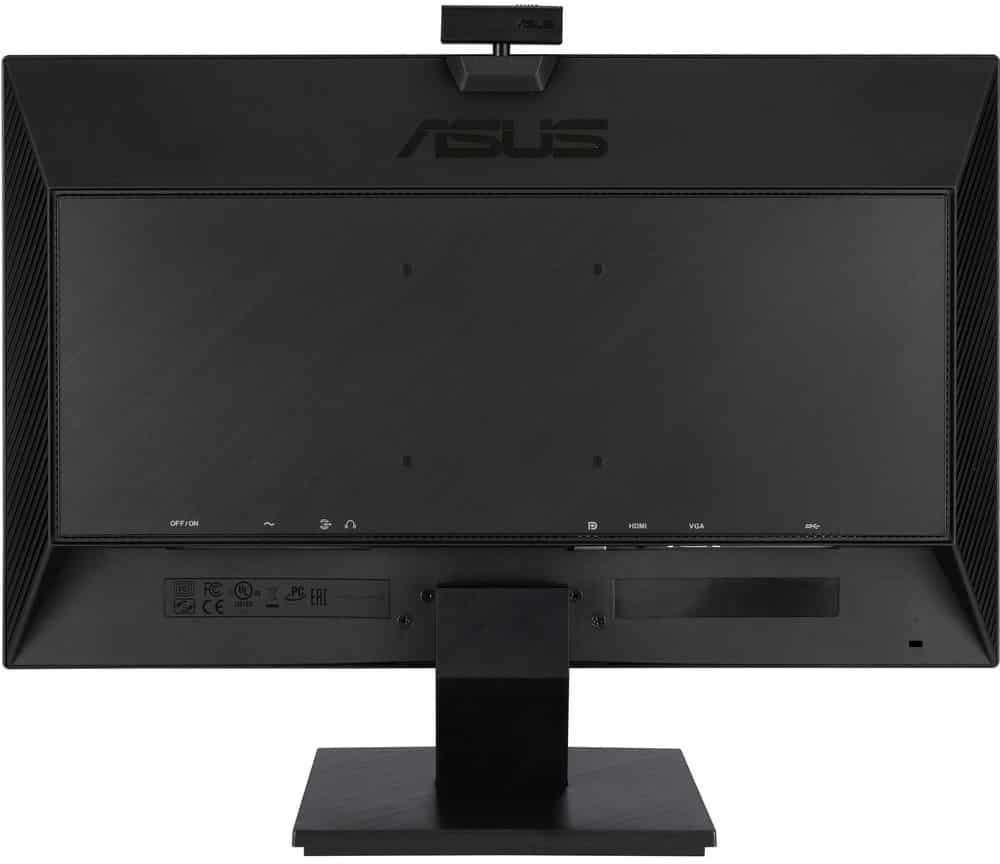 The Asus BE24EQK is a business monitor, so it looks the part and it isn’t as aggressive-looking as its ROG counterparts. The monitor has a matte black chassis that looks timeless and is resistant to scratches and fingerprints. The monitor is bezel-free on three sides, but you still have inner borders and a thick bottom strip in your sights.

Its dimensions are moderate and most common with displays used at work and in school, so you won’t have trouble setting it up. The Asus BE24EQK also only weighs a little over 10 pounds which glass desks will hold fine without breakage. It only needs 7.7 inches of depth so it won’t clash with full-sized keyboards that have wrist rests.

Build quality for the Asus BE24EQK is great as far as affordable office monitors are concerned. The plastic panels are thick and sturdy, and there were no cosmetic defects on every edge of the monitor’s panels. The stand is a bit wobbly, but it’s bearable unless you poke or nudge it accidentally while it’s in use.

The Asus BE24EQK doesn’t have a joystick, but it has a layout of OSD buttons laid out on the front of the bottom bezel. Each key is big and labeled, but joysticks will still be more convenient since they don’t involve plenty of key presses. This is forgivable for an affordable model, but it’s inexcusable since Asus is already using joysticks on its budget gaming products.

The included stand for the Asus BE24EQK only offers tilt, making it less flexible than many monitors in the price range. It’s fine in most cases, but we’d like to have height adjustments at least for those who think that the display sits too low. You can always buy a VESA mount, but even the cheapest option will add more cost to you for this upgrade.

The Asus BE24EQK has a fair amount of connectivity features, but its lacking USB ports which are essential for work from home setups. The layout at the rear includes DisplayPort 1.2, HDMI 1.4, and VGA for video inputs, along with two 3.5mm jacks for audio passthrough. The single USB port isn’t usable since it’s meant for servicing the product instead of transferring data.

The standout feature of the Asus BE24EQK is its webcam with built-in microphones for video conferencing. The gadget’s angle can be adjusted, but its 2-megapixel lens leaves a lot to be desired by today’s standards. It’s not as good and clear as other 2MP models, but you have to remember that this is a built-in unit so some of its functionalities are limited.

you also get a pair of speakers with this model, although they are limited to 2 watts of power each. They are useful for listening in to conference calls and maybe some background music, but they are unusable for games and movies. The pair cannot offer thumping bass and they easily distort at higher volume levels.

The Asus BE24EQK sports a 24-inch IPS panel with a 1920 x 1080 resolution, a 60Hz refresh rate, and a 4ms response time. The backlight is rated at 300 cd/m2 while the contrast ratio is listed at 1000:1 like most IPS panels. These specifications are typical for office monitors, so you can’t expect special add-ons like HDR.

24-inch 1080p monitors are commonly used for work and schools, so we don’t think anyone will struggle with adjusting to this monitor. it’s comfortable for reading and browsing, although it doesn’t offer a lot of extra space like the higher resolution models. it also looks decently clear for movies while games run on it smoothly even with the lower-tiered GPUs.

The Asus BE24EQK renders 93% sRGB which isn’t the best nowadays, but it’s already acceptable for daily use. The default accuracy is great as well with a deltaE average of only 1.88 which signifies that users won’t need to calibrate the monitor. it is not editing-grade, but it’s decent considering that it was made for office work instead of imaging.

Calibrating the Asus BE24EQK resulted in an outstanding dE average of only 0.89 which is excellent for a low-priced business display. It becomes usable for editing work, although professionals will not ignore the limited gamut coverage. Take note that it’s not getting a colorimeter just to tweak this monitor since it’s quite expensive.

The backlight on the Asus BE24EQK punched above its rating, reaching as much as 279 cd/m2 at 100% brightness. Its contrast isn’t impressive since it maxes out at 885:1 at 60% brightness, so the monitor cannot produce deeper blacks and profound dark scenes. This is common on all IPS monitors, but some have special features which helped the specific product improve in this regard.

Panel uniformity for the Asus BE24EQK was excellent since there were no backlight leaks or any clouding issues. There are some very minor differences in the spread of the backlight, but it’s only slightly visible with all-black images. Take note that this aspect varies between units, so there are better and worse ones out there.

The Asus BE24EQK’s IPS panel is capable of good motion handling, so it is not as blurry as older IPS-equipped models. You don’t need to push the monitor’s overdrive since it will induce overshoot which is worse than the already minor persistence. The only true limitation here is the 60Hz refresh rate, but that’s understandable since this is a business monitor.

It also doesn’t have FreeSync, so naturally, Nvidia’s G-Sync Compatible mode is also out of the question. That’s fine in most cases since this is a 60Hz 1080p monitor and framerates won’t fluctuate too much in casual titles. Input lag sits at 10ms at 60Hz, so there is no need to worry about delays when using the monitor.

Thoughts on the Asus BE24EQK

The Asus BE24EQK is a great choice for those who work from home or remotely as dictated by today’s standards. You get a balanced IPS screen along with a very useful webcam that gets the job done when it comes to conference calls. We like that its color accuracy is already good to go from the factory, so busy folks who can’t be bothered can start working right away.

However, the Asus BE24EQK does have a lot of penalties to help meet its affordable price point. it could use a more flexible stand plus a few USB ports to complete its character of being a business or productivity monitor. It’s a great buy for remote work, but that’s the only reason we’d get it over a 144Hz IPS model with great colors like the AOC 24G2.

Search
You are here: Home / Reviews / Asus BE24EQK Review – 1080p IPS Monitor with Webcam for Work from Home
This website uses cookies to improve your experience. We'll assume you're ok with this, but you can opt-out if you wish.Accept Read More
Privacy & Cookies Policy