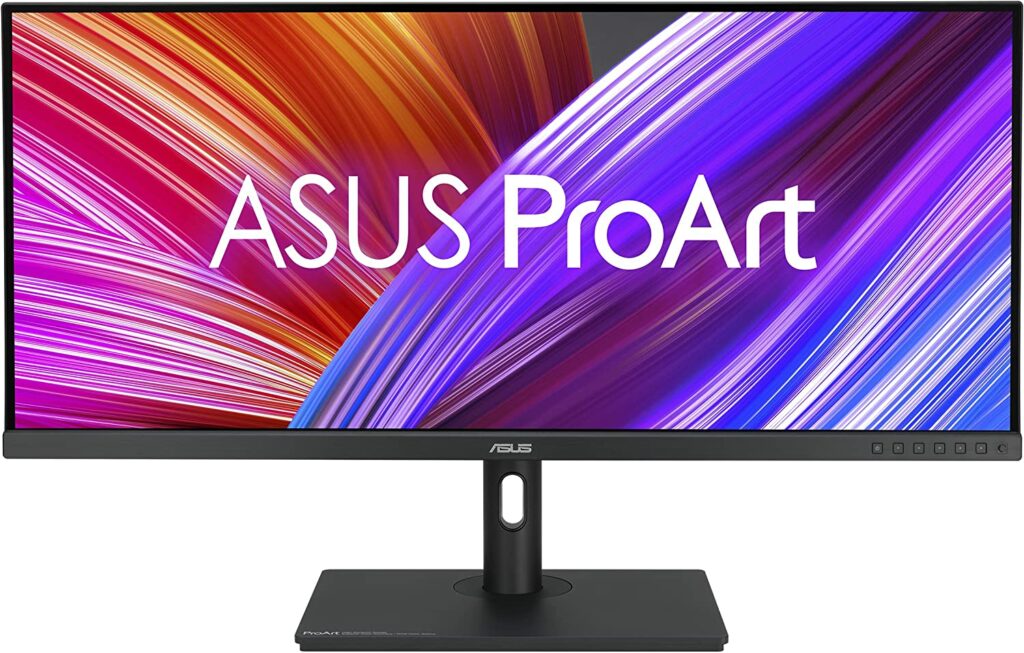 The Asus ProArt PA348CGV makes everyone happy with its flexible specifications and tough yet sophisticated design. It’s a step-up version of the Asus ProArt PA34VC since it now uses an IPS panel versus the former’s VA display. It looks like it’s a steal at its MSRP, but let’s check it out to know if it is truly worthy of the ProArt branding. 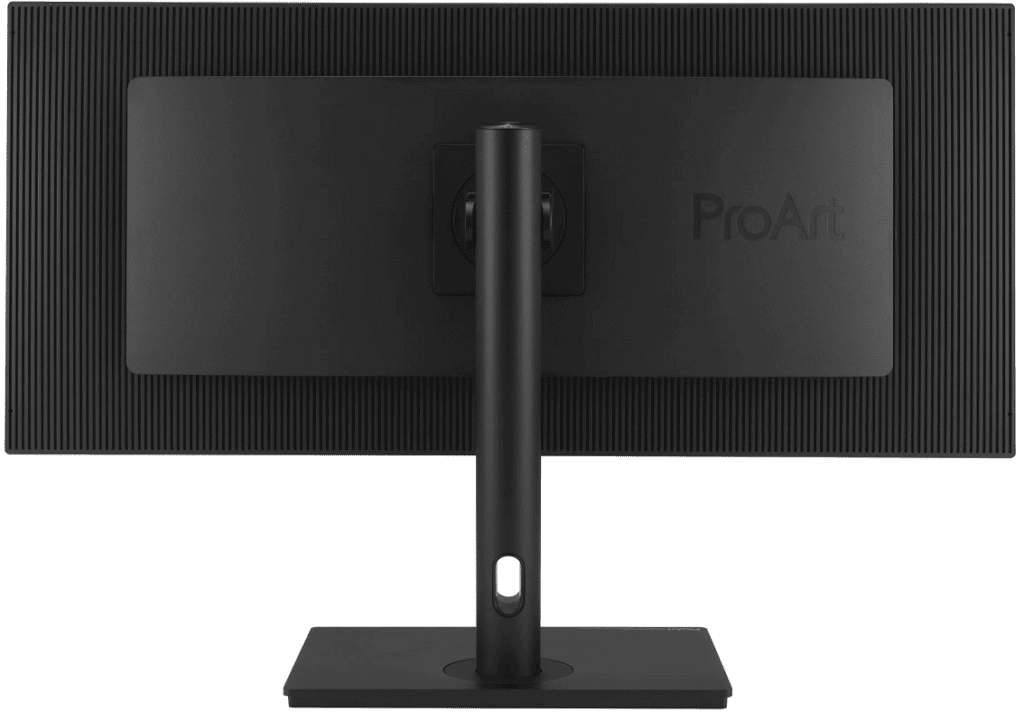 The Asus ProArt PA348CGV sports a clean and sophisticated appeal that you would normally see on all ProArt monitors. The monitor has a nice matte black finish with a gunmetal accent on the bottom bezel so it doesn’t look cheap despite sitting at the lower price bracket of the ProArt line. The display is bezel-free on three sides, but it still has panel borders just like any other modern monitor.

You’ll know that this model has a reduced footprint to make it environmentally conscious if you compare its dimensions to previous 34-inch ultrawides. It has a smaller base so it only needs 9.65 inches of depth, but it is still expansive towards the side so it can offset peripherals like speakers. What’s surprising about it is its 26.90-pound weight, but that can only mean that it is heavily reinforced for durability.

And durability is where this model doesn’t disappoint, so it should last quite a while or until the time you feel the need to upgrade. The plastics used are thick and sturdy, plus you’ll know that there are plenty of reinforcements because of the weight. The included stand is firm and stable so the large screen won’t sag or wobble while it’s in use.

The Asus ProArt PA348CGV has a joystick that’s flanked with hotkeys for easy access to the monitor’s specific features. What we like about it is it’s located at the front of the bottom bezel so it’s far easier to access than what other monitors have. The problem is that they aren’t labeled, but you’ll get the hang of it just like we did with the brand’s gaming monitors.

The stand included in the package offers tilt, swivel, and height adjustments for your convenience. It is easy to manipulate the screen to get a good angle to prevent strain on your neck and eyes. You can use VESA mounts, but it’s only necessary if your desk is small or when there are multiple monitors in the workstation or gaming setup. 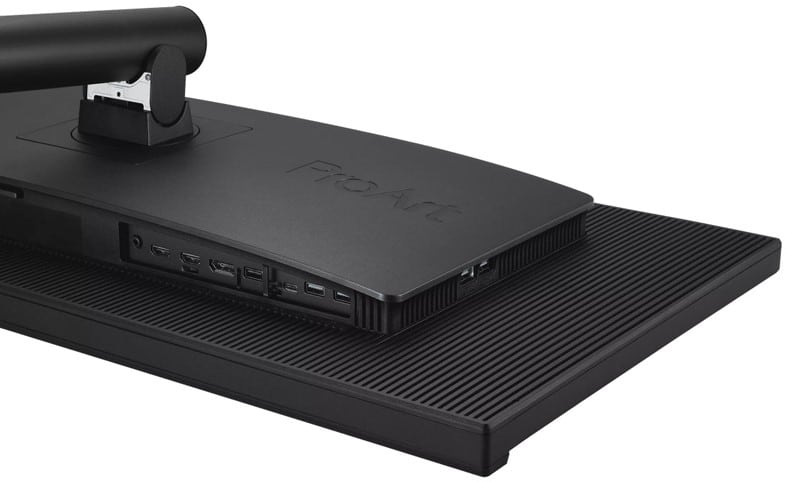 Its connectivity layout also got upgraded with a 90-watt USB-C port to complement its DisplayPort 1.4 and dual HDMI 2.0 slots. That makes the monitor very flexible for users who also have a USB-C laptop for work and a desktop PC or console for play. You also get four USB 3.2 slots and a 3.5mm jack for your accessories, peripherals, and drives.

What we found most disappointing with this model is its 2-watt pair of built-in speakers. they sound very timid for a monitor at this size and of this caliber and they are mostly unusable for anything that involves audio. We wish Asus could upgrade their speakers for their product lines, especially the premium ones such as the ProArt and ROG series.

The Asus ProArt PA348CGV boasts a 34-inch IPS panel with a 3440 x 1440 resolution, a 120Hz refresh rate, and a 2ms response time. the backlight has a 400 cd/m2 peak while the contrast is at 1000:1 like most IPS monitors. This model promises prosumer-grade accuracy while the extended refresh rate smoothens the visual experience for both gaming and editing.

1440p ultrawides are perfect for just about anything since they offer more room for applications, documents, and even FOVs in gaming. It does this without sacrificing its pixel density so it’s still sharp and crisp compared to lower resolution models. However, you will need a newer GPU if you want to run this monitor at its maximum.

The Asus ProArt PA348CGV renders more than 100% sRGB 98.5% DCI-P3, and 94% Adobe RGB using their respective filters. Each one has a deltaE average that doesn’t even exceed 1.1, with sRGB being the most accurate at 0.97. These scores are guaranteed because of the monitor’s factory calibration, but you have to use the specific filter for each gamut to get them.

Calibrating the monitor reduced the deltaE average to 0.56 which is something you’d see on the flagship ProArt monitors. However, you will need a colorimeter to achieve this score since the monitor doesn’t have a built-in colorimeter. Buying one only becomes important if you will use the monitor for earning, but we think the default settings will be enough for most users.

Its backlight reached 399 cd/m2 at 100%, but it peaked at 405 cd/m2 when it is HDR mode kicked in. However, it doesn’t have a FALD backlight so its contrast was mostly unmoved from the 1143:1 result. The screen is still unable to produce deep blacks like its mini-LED siblings, but that’s an acceptable limitation of IPS monitors.

Panel uniformity from the sample did not have any major issues like backlight leaks and clouding. There was some variance in the backlight’s spread, but it wasn’t as noticeable when the display is showing a colored image. Note that this can change with every monitor made so it is possible to get a unit with symptoms.

The Asus ProArt PA348CGV’s response time is great if you consider that it’s a prosumer model that was meant primarily for editing work. Its 120Hz refresh rate is a big help, but of course, it also has an effective overdrive if you want to play fast-paced titles. However, we don’t recommend using that feature at its maximum level since it will induce overshoot which is worse than the already minor persistence the panel has.

The Asus ProArt PA348CGV is also compatible with FreeSync Premium Pro and Nvidia’s G-Sync via DisplayPort. This dual compatibility will extend the monitor’s life since you don’t have to ditch it in case you switch to the other GPU brand. Input lag sits at 6ms at 120Hz, so its responsiveness is comparable to other fast ultrawides we’ve seen in recent years.

Thoughts on the Asus ProArt PA348CGV

The Asus ProArt PA348CGV is one of our new favorite monitors since it blends professional and gaming-grade qualities. It is robust and well-designed, plus it has the right features that a modern consumer would be looking for. Its IPS panel proves that you don’t have to sacrifice speed for image quality and vice versa.

However, some of its add-ons are dated for the price so they are ill-matched for what the monitor can do. It is also pricey for most, and we think that it’s overkill if you are only working on web content that only requires good sRGB coverage. However, it’s one of the best monitors out there right now, and we highly recommend it if the budget permits. 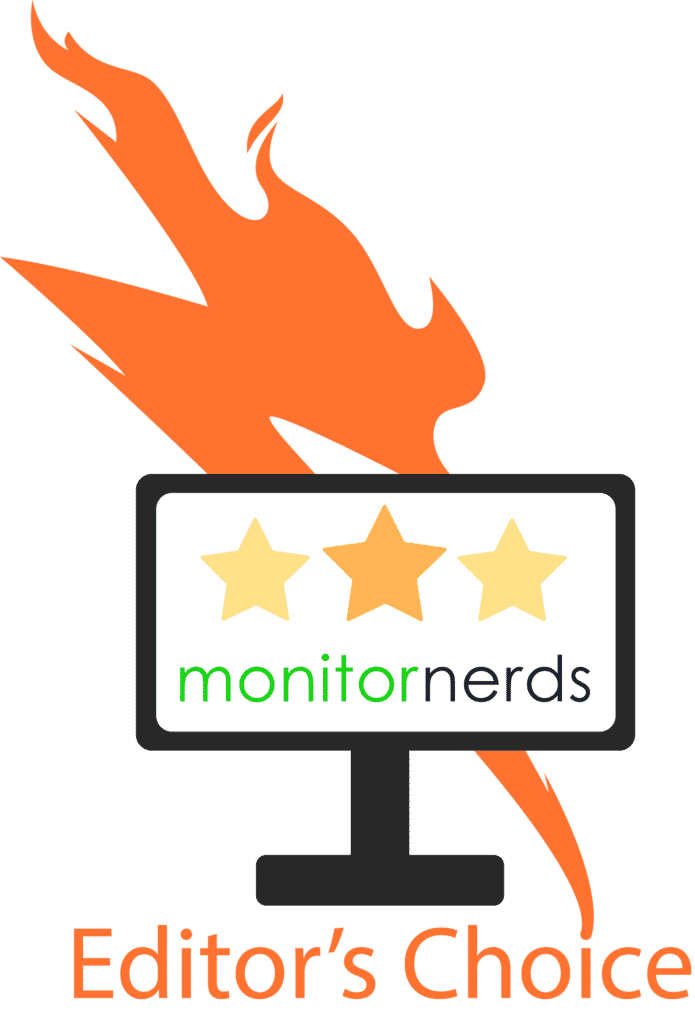 Search
You are here: Home / Reviews / Asus ProArt PA348CGV Review – Versatile 120Hz Ultrawide for Professionals and Gamers – Editor’s Choice
This website uses cookies to improve your experience. We'll assume you're ok with this, but you can opt-out if you wish.Accept Read More
Privacy & Cookies Policy