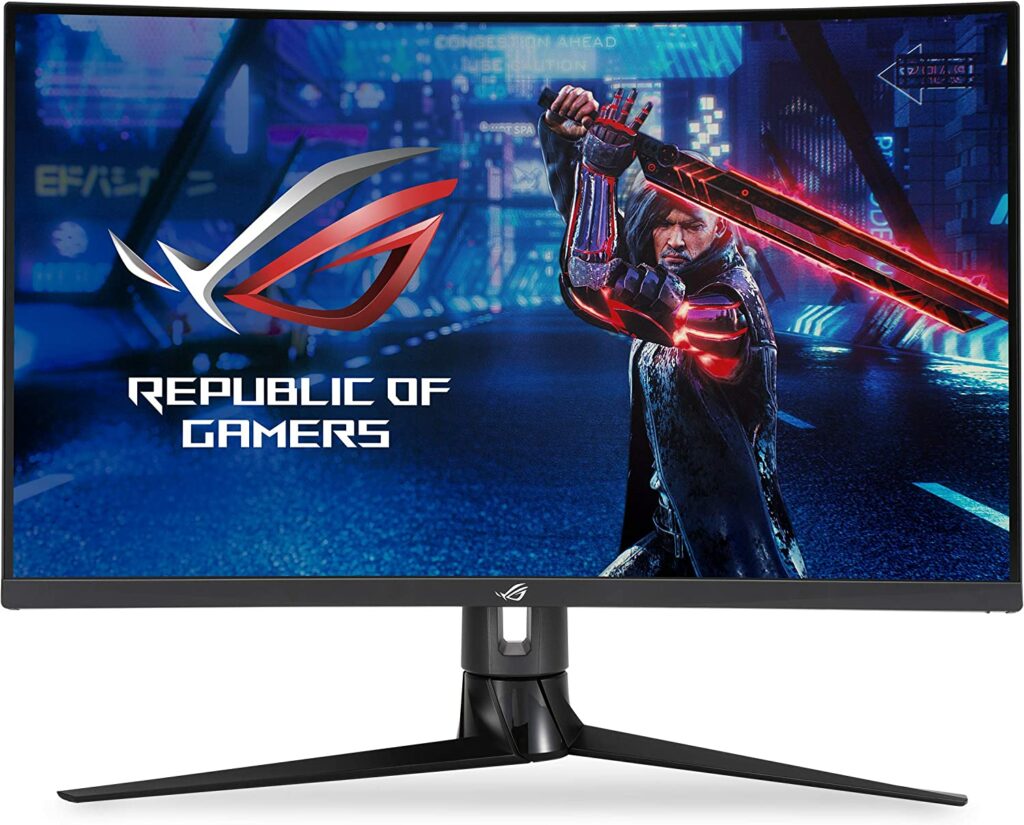 The Asus XG32VC slides into the sweet spot with its 170Hz curved display along with USB-C connectivity for extra flexibility. It gets the usual ROG Strix treatment which stands for pure gaming performance above anything else. Let’s check and see how the Asus XG32VC fares in a highly competitive segment that’s full of excellent examples such as the Gigabyte M32QC. 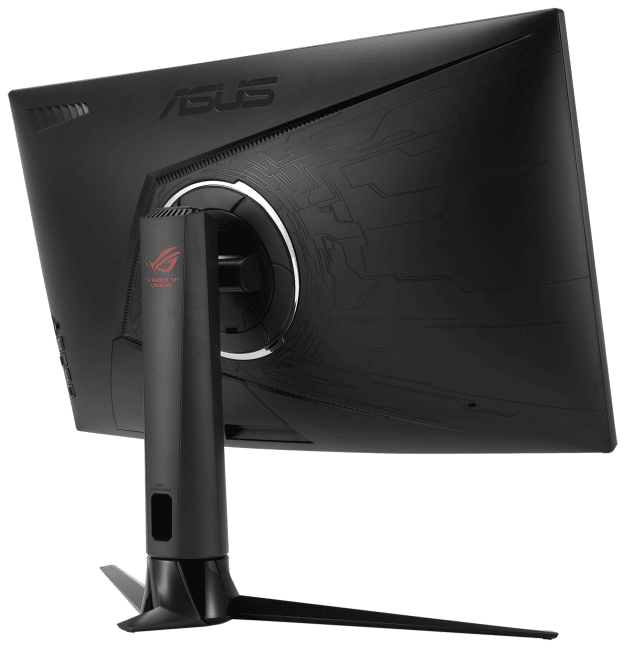 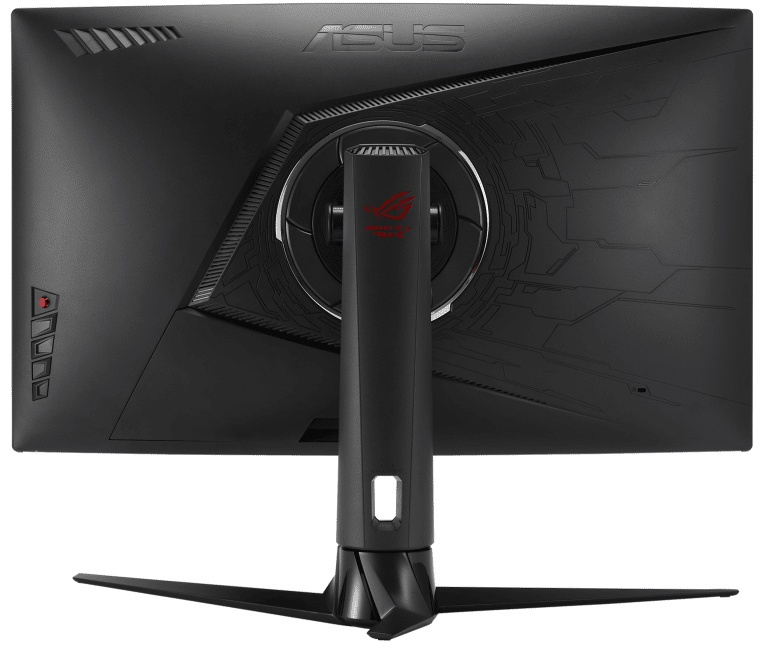 The Asus XG32VC uses the same aesthetic as the other current ROG models which look a bit more subtle than the original design. The monitor has a matte black finish that doesn’t go out of style or fade easily, so it should fit right into most gaming setups. The screen has a three-sided bezel-free design, but it still has inner borders like the rest.

The XG32VC has RGB lighting at back like many of the ROG monitors. It can sync with Asus Aura so you can create a lighting theme that works hand in hand if you have other Asus gear.

It’s a big monitor so it might be a tight fit for setups with plenty of desktop peripherals or tables that aren’t standard-sized. It needs almost a foot of depth when fully assembled and it’s almost as wide as a 3440 x 1440 ultra-wide monitor. Extra care is necessary if you are moving the monitor around since it’s quite heavy at 20.94 pounds.

The monitor’s build quality is excellent as expected just like many of the Asus ROG monitors we’ve seen in the past. The plastics feel thick and durable, plus there were no cosmetic defects on any of its parts and edges when the monitor was unboxed. The included stand offers excellent firmness and stability so the massive display won’t wobble or sag while you are in the heat of battle.

The Asus XG32VC has an OSD joystick that’s accompanied by four buttons with individual functions. Its located at the back near the right side of the monitor so you can easily reach it without straining your arms or hands. Other premium monitors have remotes, but they aren’t as important unless you use the monitor like a TV in a couch gaming setup.

The stand included with the package offers tilt, swivel, and height adjustments for your comfort and convenience. You can’t pivot the screen, but that’s okay since large curved monitors aren’t suited for portrait mode. you can swap it out with a VESA mount, but that takes some of its aesthetic value, and it is impractical in most cases. 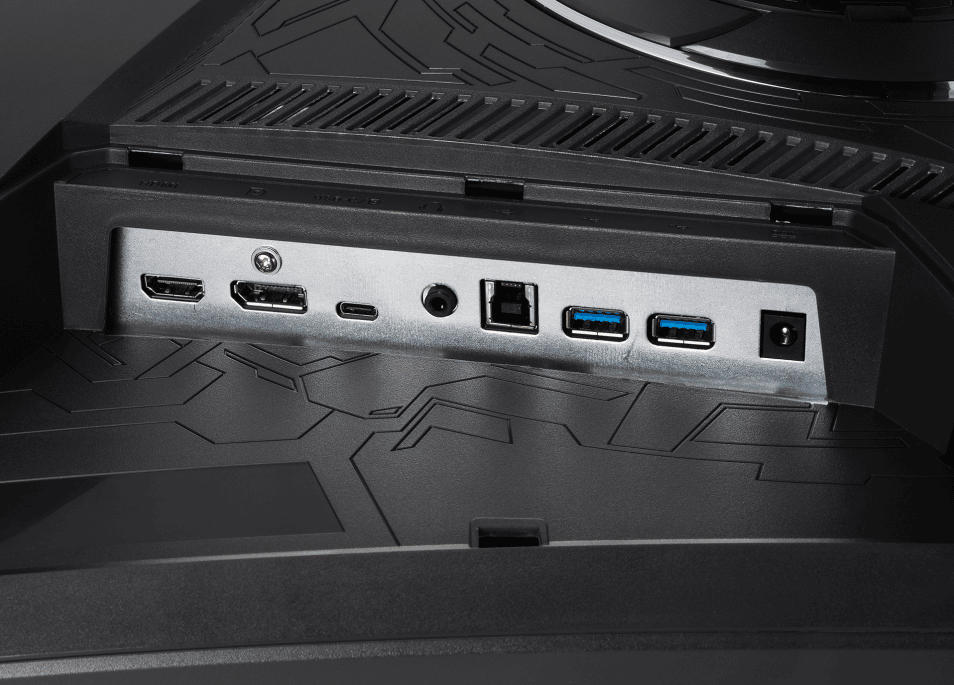 Its connectivity layout includes the usual DisplayPort 1.2 and HDMI 2.0 combo with two usable USB slots. However, this “VC” variant has a USB-C slot that supports DP Alt Mode and it has KVM functionality. That means you can plug in your USB-C laptop to the monitor and the mouse and keyboard that are presumably connected to it will automatically switch to it.

It doesn’t have speakers, but that’s okay since its primary purpose and audience will be better served by headsets or desktop sets. Note that the monitor will also switch your audio equipment to the USB-C device if it is connected to the monitor. That’s convenient in some cases, but we reckon most will have their audio gear connected directly to the motherboard.

The Asus XG32VC boasts a 32-inch curved VA panel with a 2560 x 1440 resolution, a 170Hz refresh rate, and a 1ms boosted response time. The backlight has a 400 cd/m2 maximum while the contrast is listed at 3000:1 like most VA panels. This model is HDR 400 certified, but it doesn’t have a comprehensive backlight solution that’s essential for better performance in this regard.

32-inch QHD monitors are not as sharp as their smaller, and more popular siblings but you have to remember that the extra pixels are still there. It is great for reading, browsing, and office work, plus games still look great because of the higher pixel count. Note that you will need a more powerful GPU if you want games to reach that 170Hz limit.

The Asus XG32VC renders a little over 100% sRGB and around 93% DCI-P3 for stunning color in games and movies. Its default accuracy is great since the dE average is only at 1.89, so most users won’t need to calibrate it. Its ready for gaming after a few minor tweaks, so plug-and-play users can enjoy their money’s worth without any initial troubles.

Calibrating the Asus XG32VC reduced its deltaE average to 1.07 which is fantastic for a gaming monitor with an extended gamut. The downside is that you will need the help of the colorimeter to tune it and get this kind of improvement. The gadget isn’t cheap so it isn’t practical to get one if you are only using this monitor for gaming.

The display’s backlight reached 398 cd/m2 in SDR at 100% and it peaked at 409 cd/m2 when its HDR 400 mode is active. Its contrast reached 2677:1 at 50% brightness, so it’s capable of deep blacks and excellent dark scenes in games and movies. Unfortunately, it doesn’t have the capability to expand that contrast like the FALD-equipped models, although those are more expensive.

Panel uniformity for the sample did have some issues due to backlight leaks on the top edges of the screen. They added clouding in some instances such as when the monitor is displaying an all-black image. This is quite common with curved VA panels, but it is entirely possible to get a unit with better uniformity.

The monitor’s pixel response time isn’t the best, especially when it’s compared to the various Fast-IPS models out there. It’s still prone to blurring and some smudging in fast-paced and contrasting transitions, so you need to use a bit of overdrive for it. However, we don’t recommend maxing it out instantly since doing so will add overshoot.

The Asus XG32VC is compatible with FreeSync and G-Sync so you don’t have to worry about losing VRR functionality. Dual compatibility is a must-have now, so you don’t get stuck to one GPU brand when its time to upgrade your PC. Input lag sits at 4ms so you won’t feel any delays or “de-synced” instances while gaming.

Thoughts on the Asus XG32VC

The Asus XG32VC is a great pick if you want a large 1440p screen with plenty of color and contrast. It works great for gaming and its improved design makes it a worthy choice if you want top-notched quality. The addition of USB-C connectivity and KVM is a nice touch since it can now be used with common workstation devices like MacBooks.

However, we don’t think it’s perfect especially since it’s priced higher than similar options like the Gigabyte M32QC we’re comparing it with. It is also disappointing that they didn’t juice the USB-C wattage up so the product can at least charge the laptops while it’s docked. Overall, it’s a decent choice, but we recommend getting it when it’s discounted.

Search
NEW
POPULAR
You are here: Home / Reviews / Asus XG32VC Review –32-Inch QHD Gaming Monitor with USB-C – Recommended
This website uses cookies to improve your experience. We'll assume you're ok with this, but you can opt-out if you wish.Accept Read More
Privacy & Cookies Policy