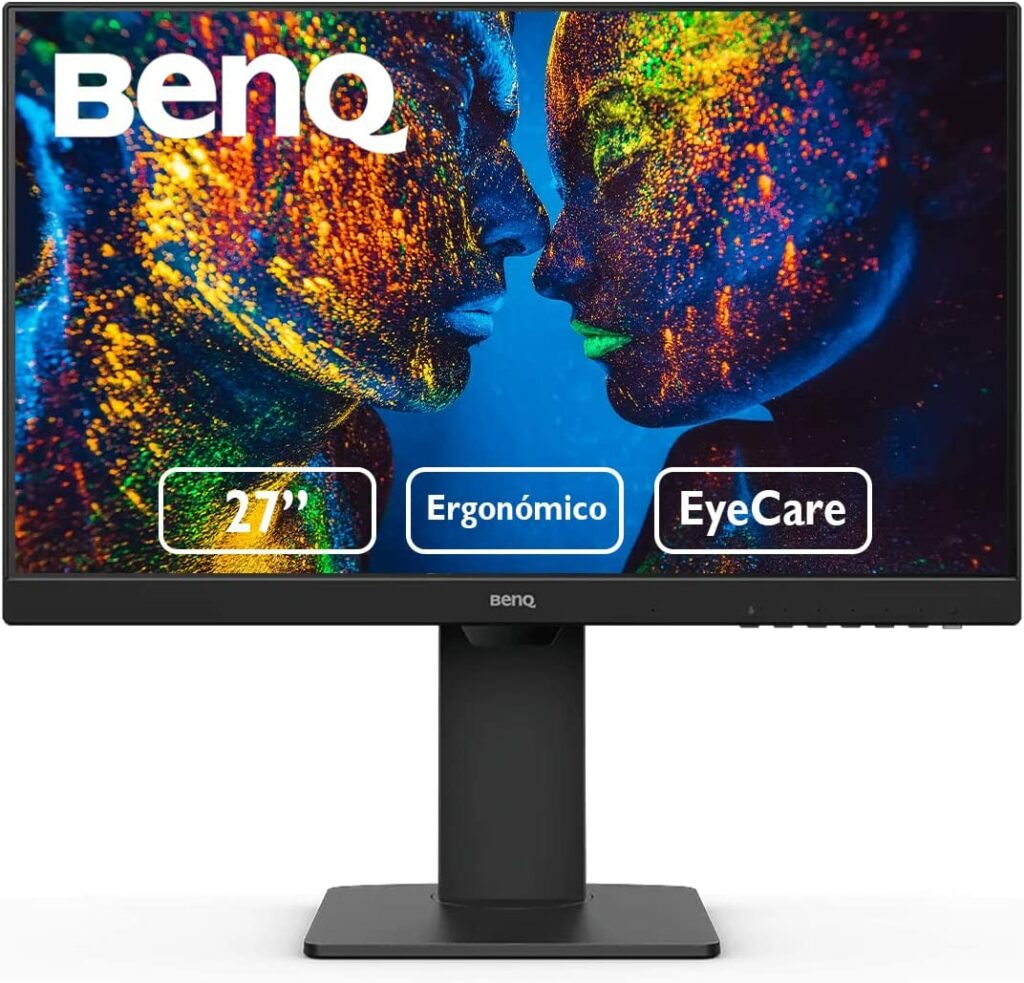 The BenQ GW2785TC is a functional monitor with plenty of features for work, business, and daily use. It’s a great pick for remote work setups thanks to its valuable add-ons, but it’s still an office monitor since it doesn’t carry special capabilities like HDR or high refresh rates. It’s a bit pricier than your usual 1080p display because of the added equipment, so let’s check it out to know if it’s worth the cash. 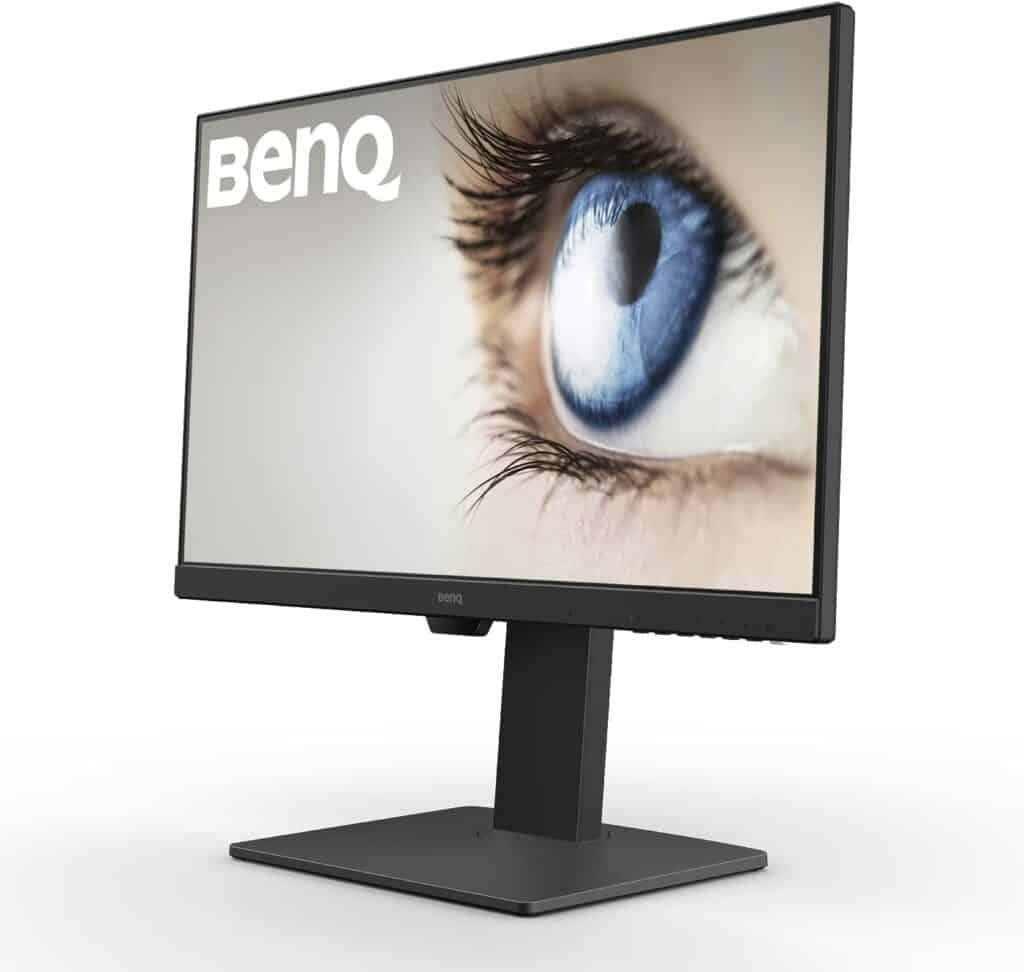 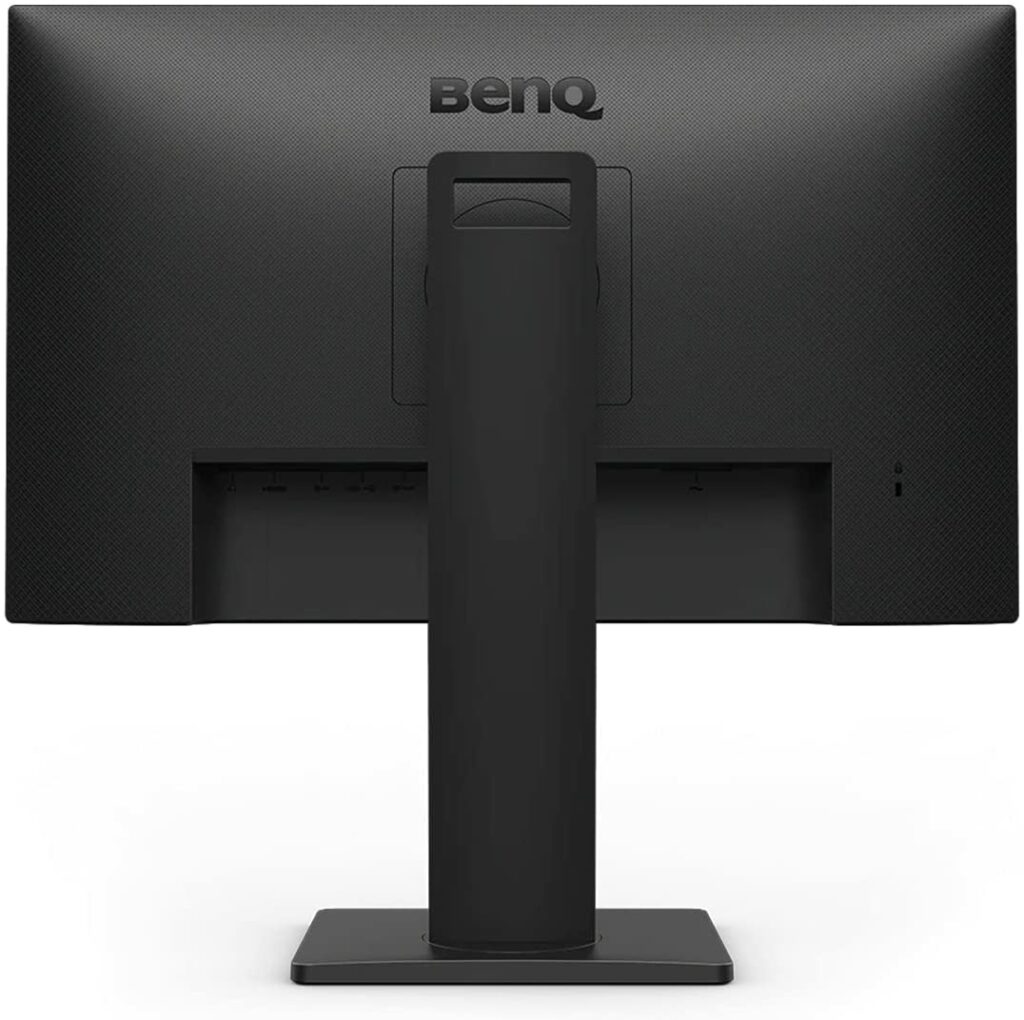 The BenQ GW2785TC has a strictly functional aesthetic which basically makes it look like any office monitor. It has a matte black finish that can resist scratches and smudges so it will always look neat and new. The monitor has a three-sided bezel-free design so it looks clean, but it still has inner borders that show up when its in use.

It is not a giant monitor, but its ergonomic stand makes it consume over 9 inches of depth from your desk. It’s quite heavy for an office display at 17.2 pounds, but its still easy to carry around, especially with its carry handle. Placement won’t be an issue for most, but you might want to consider space-saving solutions if you need more than one of these monitors.

Its build quality is great and just as good as what the brand’s premium variants can offer. The plastics used are thick and sturdy, plus there were no cosmetic defects on any of its parts. The included stand is firm and stable so the screen won’t shake or sag while you are tasking away.

The first downside we saw on the BenQ GW2785TC is its use of OSD buttons instead of a more convenient joystick. The keys are located under the bottom bezel on the right side so they are easily within reach. However, there are several buttons there, so it can be confusing and time consuming for most users.

The stand included with the package offers tilt, swivel, pivot, and height adjustments for your comfort and convenience. It is essential to have an ergonomic mount for business monitors so you can easily get a suitable viewing angle for those long hours. You can also swap it out with a VESA mount, but it only becomes necessary if you have more displays on your table.

The BenQ GW2785TC has a slot each for DisplayPort 1.2 and HDMI 1.4, along with a 60-watt USB-C slot with DP Alt Mode. It also has a DisplayPort-Out slot with MST, so you can daisy chain a second monitor and eliminate some of the cable fuzz. It has a 3.5mm jack, but we thought that its lack of typical USB ports for peripherals was peculiar.

It also has a pair of 2-watt speakers, but what makes the GW2785TC unique is its inclusion of noise-canceling microphones. This combination makes it usable for remote work use, although it could use a webcam. You need to buy the latter, but the built-in mic at least lessens the cost if you are building a work-from-home setup.

The BenQ GW2785TC offers a 27-inch IPS panel with a 1920 x 1080 resolution, a 75Hz refresh rate, and a 5ms response time. The backlight has a 250 cd/m2 rating while its contrast is listed at 1000:1 like most IPS panels. This model doesn’t have entertainment-grade extras like HDR compatibility but that’s okay since it was meant for business use.

Larger 1080p monitors are less popular due to their lower pixel density which isn’t good for games and movies.  However, it is not as big of an issue as many claims since the screen itself still looks decent for most uses. It’s easier to read and see because of that low PPI so users who work for hours will suffer from less eye strain.

The BenQ GW2785TC renders 98% sRGB coverage which isn’t the most comprehensive, but good enough for daily use. It’s decently accurate with a deltaE average of 2.46, so most users won’t feel the need to calibrate or buy a better monitor. It is not tuned like the PhotoVue and DesignVue models, but that’s okay considering that those monitors are more expensive.

Calibrating it reduced the dE average to 1.05 which makes the monitor better for editing or content creation. However, you need a colorimeter to get a score like that, and those aren’t cheap or readily accessible. The extra spend will only be necessary if you are into color-critical work, but you should also consider a better monitor that’s up to the task.

Its backlight reached 253 cd/m2 at 100% which is sufficient for most situations unless your room has more windows. However, its contrast is unremarkable since it only reached 977:1 at 80% brightness. The screen is unable to produce deep blacks, but it’s more consistent when it comes to color.

Panel uniformity for the BenQ GW2785TC sample did not have any major issues like backlight leaks or clouding. There was some variance in the backlight’s spread, but it is only noticeable in dark scenes or when you scan the monitor with a colorimeter. Note that this can change between every monitor due to tolerances in play, so there are better and worse units out there.

Its IPS panel has an extra 75Hz on top which helps a bit with its limited pixel response time. However, it’s not as good as the Mobiuz models in this regard, so we recommend using a bit of its AMA feature if you want to play fast-paced games. Note that we don’t recommend using its maximum level since it doesn’t help as much and it adds overshoot into the mix.

The BenQ GW2785TC also doesn’t have FreeSync and G-Sync compatibility like many business models in the market. It’s basically free so it should be added, but brands are still keen to define the line between business and gaming models. Input lag sits at 9ms at 75Hz, so it’s still snappy and responsive enough for any type of use.

Thoughts on the BenQ GW2785TC

The BenQ GW2785TC is a well-designed solution for current trends in the professional and educational categories. It has a decent IPS panel that’s perfect for office work and daily use and it’s equipped for modern requirements. It’s not the cheapest office monitor in the market, but it’s difficult to find something similarly priced that includes USB-C and noise-canceling microphones.

Our biggest issue with it is it lacks a webcam which would complete its posture as a monitor for remote work. We know that webcams aren’t that expensive, but adding them would raise the price and make the monitor compete in a higher segment. Overall, it’s a great solution for today’s specific needs, but you have to buy that webcam with it.

Search
NEW
POPULAR
You are here: Home / Reviews / BenQ GW2785TC Review – Functional 1080p Monitor with USB-C and Built-In Microphone
This website uses cookies to improve your experience. We'll assume you're ok with this, but you can opt-out if you wish.Accept Read More
Privacy & Cookies Policy