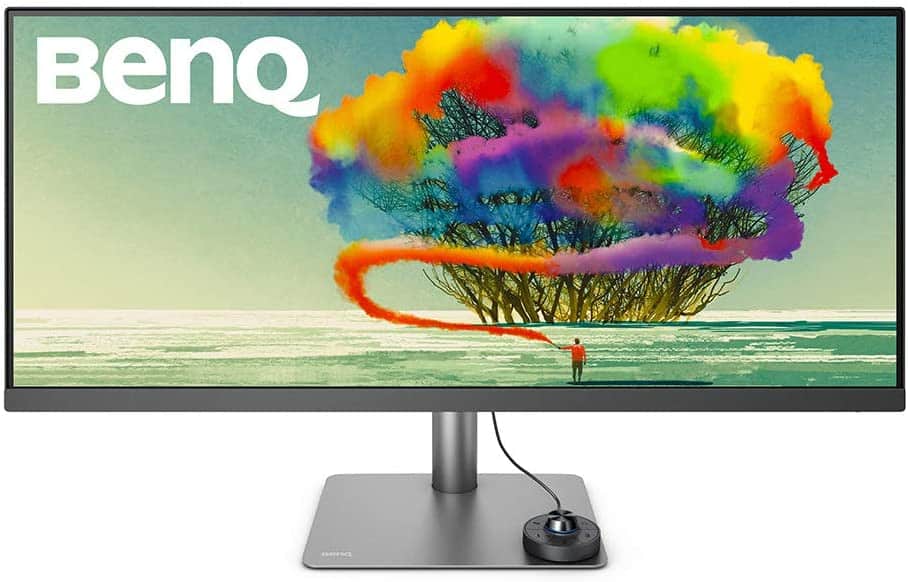 The BenQ PD3420Q offers a large color-accurate screen with plenty of features to help you improve your craft in the digital space. High-quality IPS ultrawides are usually more expensive or have fewer features, making this option more affordable for those who want more for their cash. Let’s check out how the BenQ PD3420Q performs to know if it should be your next upgrade. 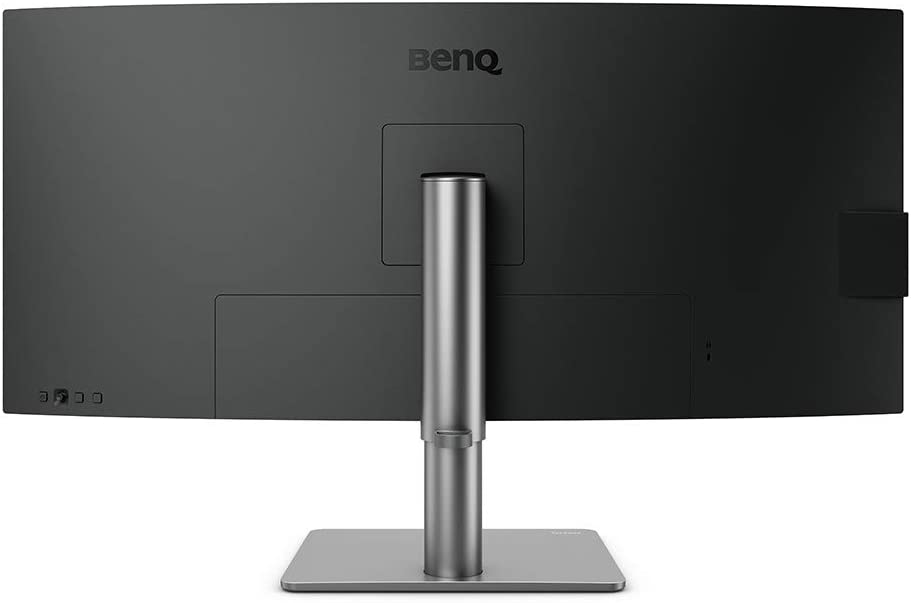 The BenQ PD3420Q sports the brand’s DesignVue aesthetic which makes it look simple yet elegant. The device has a matte black chassis that’s mated onto a silver stand so it doesn’t look like just any office monitor. The display has a three-sided bezel-free design like all modern monitors, but that also means that it has inner borders that will show up when it’s in use.

It isn’t the biggest monitor by today’s standards, but it’s still a 34-inch ultrawide. Consider its unconventional width first before buying since it can cover and offset your desktop speakers, especially if you have bookshelf-sized models. It is not that heavy at 21.2 pounds, but it would be wise to ask for help in setting it up to avoid catastrophic accidents.

It is built just like any of BenQ’s products so you don’t have to worry about its build quality and durability. The plastics used are thick and sturdy, plus we did not see any cosmetic defects when it was unboxed. The included stand is firm and stable so the monitor won’t wobble when you are using it.

The BenQ PD3420Q has an OSD joystick with hotkeys at the back, but it also has a wired remote that makes things even easier. Monitors like this often see a lot of tweaking from their intended audience, so it’s handy to have tools like this. The only downside of the remote is it is wired, but we think you’ll like using it once you get the hang of it.

The stand included offers tilt, swivel, and height adjustments for your convenience and comfort. It can’t pivot the screen, but that’s understandable since ultrawides were never meant to be used in portrait mode. You can still opt for VESA mounts, but the extra cost, if you don’t have one, will only be necessary for some select instances.

Its connectivity layout includes DisplayPort 1.4 and two HDMI 2.0 slots, along with a USB-C slot with DP Alt Mode and 65 watts of charging power. These along with the USB ports form up a KVM solution that will expand your multitasking prowess. KVM functionality is a rising trend for productivity setups since it lessens the cable swaps and mess of using multiple systems at a time.

It also has a 3.5mm jack for headphones and a pair of built-in speakers with 2.5 watts of power per channel.  It’s nothing to write home about since they cannot get loud enough to be used for entertainment purposes. However, it’s always nice to have extra features which can be used as backups or secondaries when needed.

The BenQ PD3420Q sports a 34-inch IPS panel with a 3440 x 1440 resolution, a 60Hz refresh rate, and a 5ms response time. The backlight has a 400 cd/m2 maximum while the contrast ratio is listed at 1000:1 like most IPS monitors. This model is HDR 400 compliant, but that isn’t usually the focus for a professional display.

34-inch ultrawides are perfect for both gaming and productivity since they offer more horizontal space. You get more room to maneuver for tasks and a wider field of view for games and movies. It’s sharp enough to make pictures crisp and text clear, so it should be easy on your eyes even if you don’t use scaling.

The BenQ PD3420Q renders more than 100% sRGB and 97% DCI-P3 for stunning vibrancy which you can use for editing work. its default accuracy only has a deltaE average of only 1.15 which is as advertised, below 2.0. It also filters specifically for sRGB and DCI-P3 with deltaE averages of 1.08 and 1.33 respectively.

Calibrating the monitor reduced its dE average to 0.77 which is something you’d expect from a high-end prosumer display. The downside is you need a colorimeter to achieve this kind of improvement, and they aren’t cheap. The monitor is good to go even if you don’t have the gadget, but it is also a good add-on to your tool kit if you are into editing work.

Its backlight reached 405 cd/m2 so it can fight off a decent amount of glare even if it’s used in a well-lit room. Its contrast ratio on the other hand isn’t impressive at all since it only reached 1088:1 at 50% brightness. The screen isn’t capable of deep blacks or profound HDR performance, but that’s okay since you need higher specifications or a different panel type for that.

The BenQ PD3420Q’s panel uniformity was decent overall even if there were minor variances in the backlight’s spread. The edges of the screen also had some clouding issues, but they were only mostly visible when an all-black image is on screen. Note that this can change between every monitor due to manufacturing tolerances, so there are better and worse units out there.

One of its weaknesses is its pixel response time which was further slowed down by the limited refresh rate. It is prone to blurring in fast or contrasting transitions, but it is not much of an issue in other circumstances. The monitor is usable for casual gaming, but competitive gamers or those who play fast-paced titles will notice the difference.

The BenQ PD3420Q doesn’t have FreeSync compatibility since it wasn’t designed for gaming. It also won’t work with Nvidia’s G-Sync Compatible mode, but that’s okay since it should be used for editing instead of entertainment. Input lag sits at 9ms at 60Hz so it’s still snappy and responsive, unlike the older LCD monitors.

Thoughts on the BenQ PD3420Q

The BenQ PD3420Q is a fantastic choice if you want a vibrant and accurate ultrawide for editing and content creation. Its IPS panel offers impressive gamut coverages and it’s tuned quite well from the factory. It also is well-designed with essential features like USB-C to make it suitable for modern workstations.

It is reasonably priced since anything comparable usually costs above a grand, but it’s still pricey for some with its $850 MSRP. Its main weaknesses are its limited contrast and HDR performance, but that’s expected from an IPS monitor without a FALD backlight. Overall, it’s a great buy for users who need image quality and functionality above all else.

Search
NEW
POPULAR
You are here: Home / Reviews / BenQ PD3420Q Review – Professional Ultrawide Monitor at a Reasonable Price – Highly Recommended
This website uses cookies to improve your experience. We'll assume you're ok with this, but you can opt-out if you wish.Accept Read More
Privacy & Cookies Policy