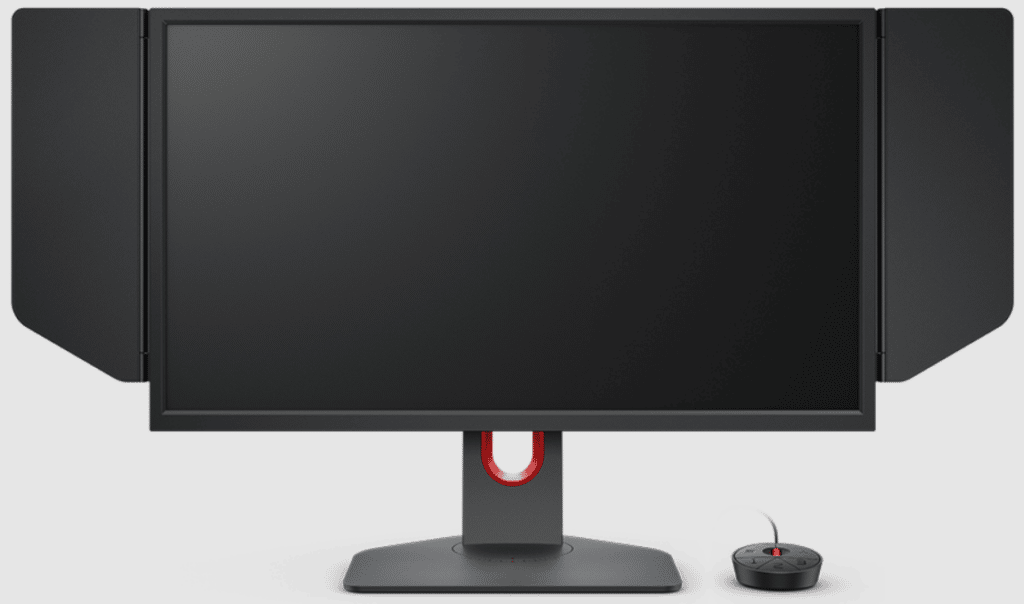 The BenQ Zowie XL2566K prioritizes smoothness and clarity over anything else the brand’s flagship competitive gaming monitor. It might be strange now, but this model uses a TN panel instead of the currently more popular Fast-IPS modules, giving it an advantage in pixel response time. Let’s check if the BenQ Zowie XL2566K is the speed king that should be on your shopping list if you are serious about E-Sports. 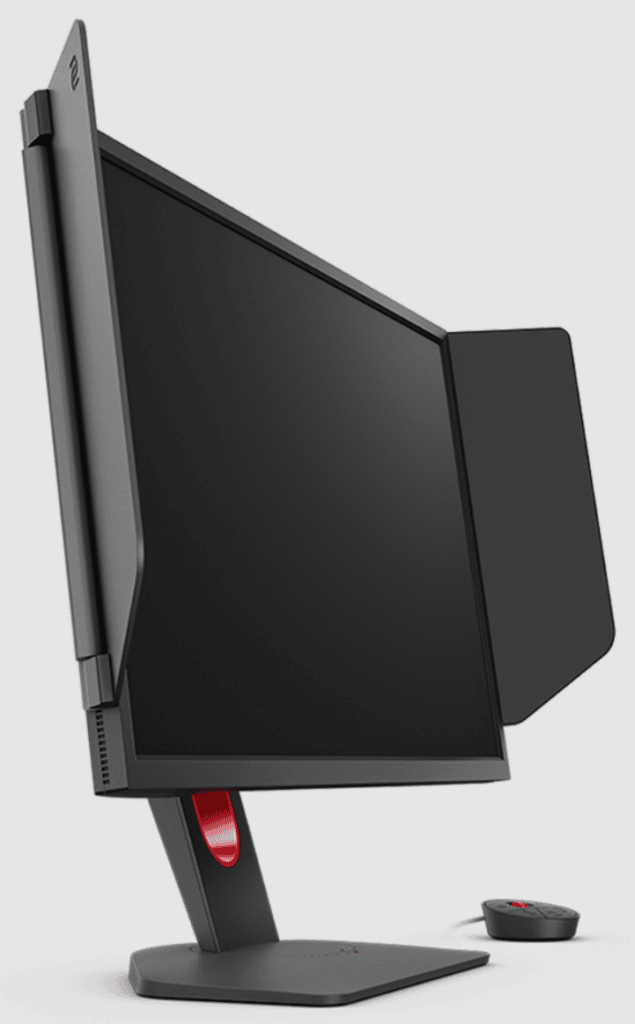 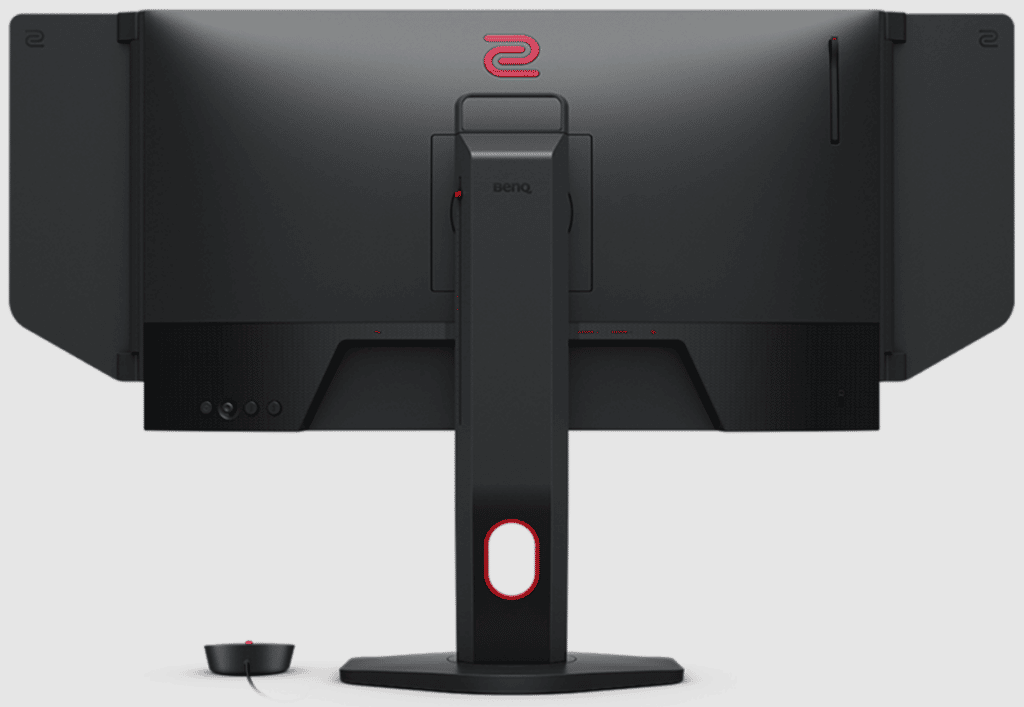 The BenQ Zowie XL2566K sports a simpler aesthetic than its Mobiuz siblings, so some can consider it less distracting. The monitor has an all-black finish so it looks cleaner, but it still has a few red accents because of the Zowie branding. The display isn’t bezel-free like all the Zowie monitors, but it’s noticeably thinner on this model versus the older ones. 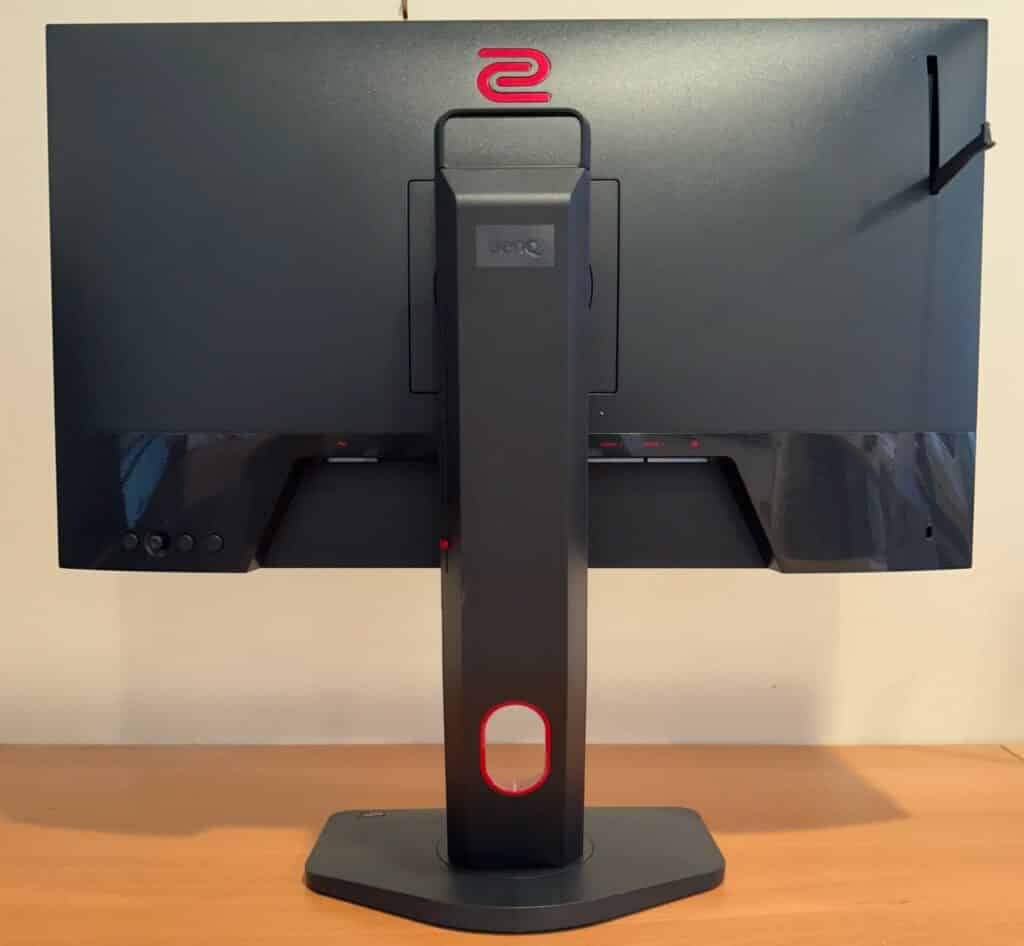 It is sized just like any other monitor you’ll encounter at work or in school, so placement shouldn’t be an issue even if you have a smaller desk. It only needs 7.87 inches of depth, unlike its predecessors which used larger bases. It’s lightweight for its size, so you can easily take it with you to tournaments and LAN parties.

Its build quality is just as good even if this latest model is one of the lightest in the brand’s entire lineup. The plastic panels are thick and sturdy to prevent flexing or cracking, plus there were no cosmetic defects anywhere. The included stand is firm and stable so the screen won’t sag or wobble during crucial moments in your game.

The BenQ Zowie XL2566K has an OSD joystick at the back, but what’s great about it is its S Switch puck. It’s basically a remote that lets you adjust some settings on the fly like switching between profiles, so you spend less time tweaking it. It is not wireless, but it’s a minor inconvenience, but it is worth it since it’s very convenient and intuitive to use, especially while you are already gaming.

The stand included with the BenQ Zowie XL2566K offers tilt, swivel, pivot, and height adjustments for your comfort and convenience. It’s easy to get a good viewing angle that’s crucial for focus and a TN panel that color-shifts at the slightest movement. You can use VESA mounts, but that only becomes necessary in select instances such as when you have multiple screens. 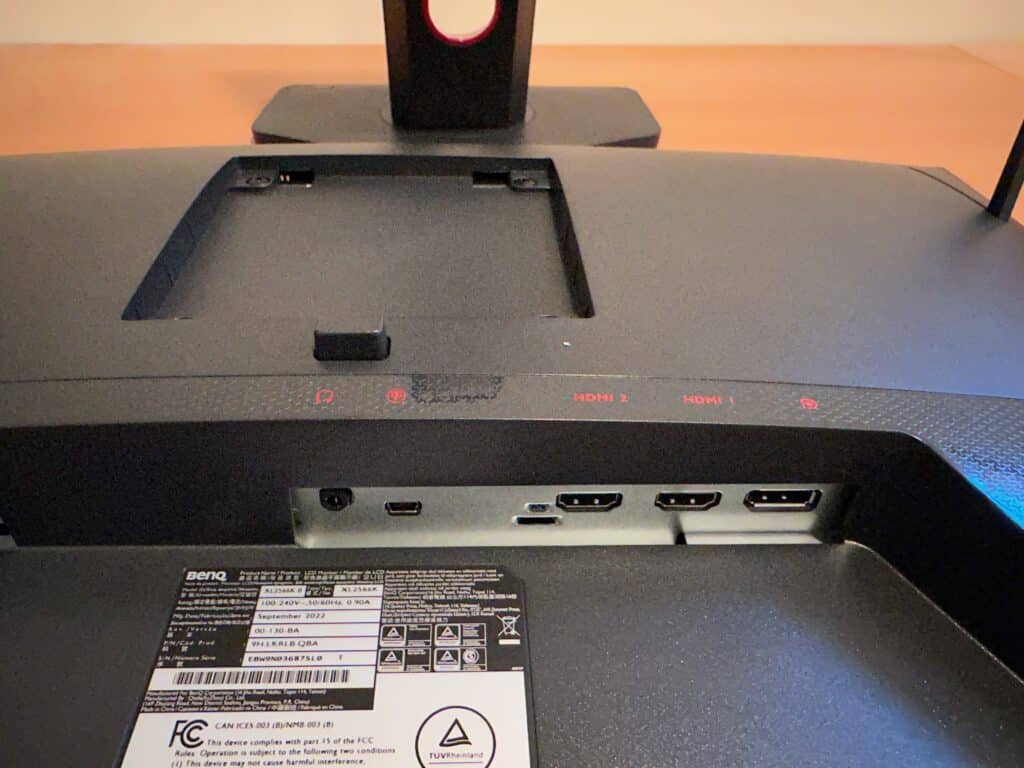 Its connectivity layout only includes DisplayPort 1.4 and two HDMI 2.0 slots, along with a 3.5mm jack for headphones. The 360Hz refresh is only available on the DP slot, but the good news is both the HDMI slots will support 120Hz modes on the PS5 and Xbox Series X. it also doesn’t have USB ports, but that’s acceptable in most cases.

It also doesn’t have speakers, but that’s understandable since headsets will be a better match for this monitor. They are great if you want to drown out the background noise and focus, or if you simply want to enjoy a game’s well-made score and soundtrack. Built-ins should be included in the price without a doubt, but they won’t get too much use anyway.

The BenQ Zowie XL2566K sports a 24.5-inch TN panel with a 1920 x 1080 resolution, a 360Hz maximum refresh rate, and a 0.5ms minimum response time. The backlight has a 320 cd/m2 typical output and a 1000 cd/m2 contrast ratio. This monitor drops special features in favor of fast response times and technologies like DyAc to support it. 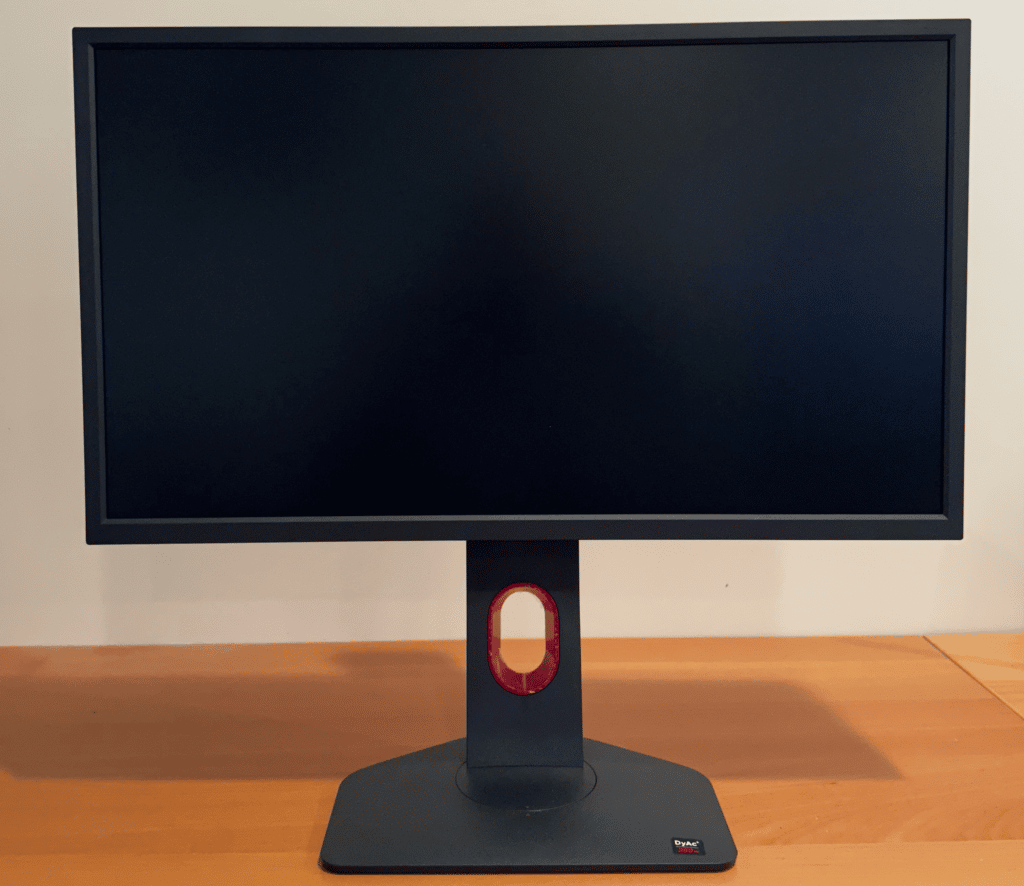 1080p monitors of this size are popular because the category is still the universal format for E-Sports and the professional organizations behind it. It is easy on the eyes as well so it’s more comfortable to use for reading and document processing. But the absolute sweet spot about it is its reasonable GPU requirements, meaning you can reach that maximum refresh with more GPUs. 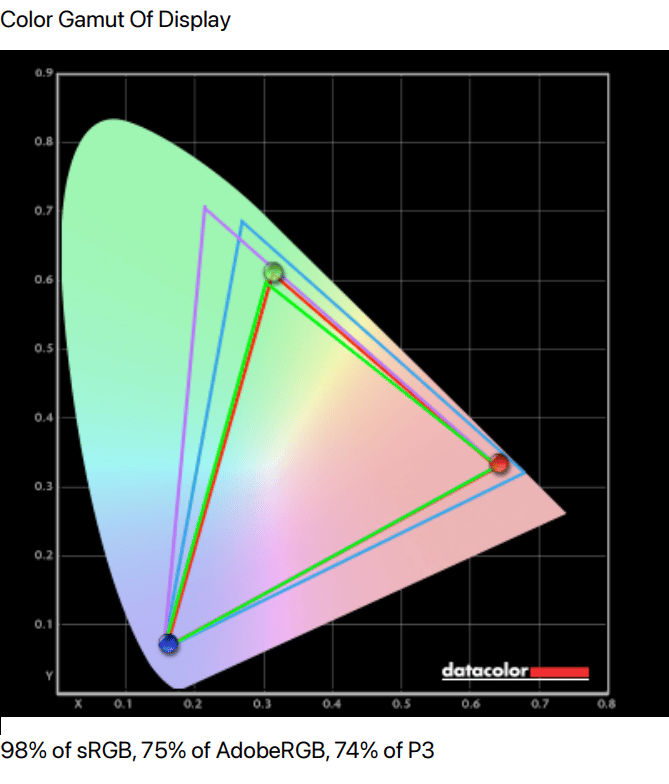 The BenQ Zowie XL2566K renders 98% of sRGB and 74% DCI-P3 which is excellent for a TN panel, but weak compared to IPS and VA models. It has a decent deltaE average of 2.13, so most users can make do without calibration. The monitor is good to go out of the box, so you only have to deal with basic settings like brightness.

Calibrating the monitor resulted in a much better 1.03 dE average which is considerably better than the default setting. However, you need a colorimeter to get the same level of results like this and confirm them. But the gadget isn’t cheap, so it’s not worth getting one for gaming and typical daily purposes like reading or browsing.

Its backlight reached 360 cd/m2 at 100% so there is some room left if you want to use its DyAc feature. The panel’s contrast ratio is limited to 850:1 at 60% brightness, so it is incapable of deep blacks like IPS monitors. The monitor has an enhancer for this, but it skews the image quality so we’ll leave it up to you to choose which is best. 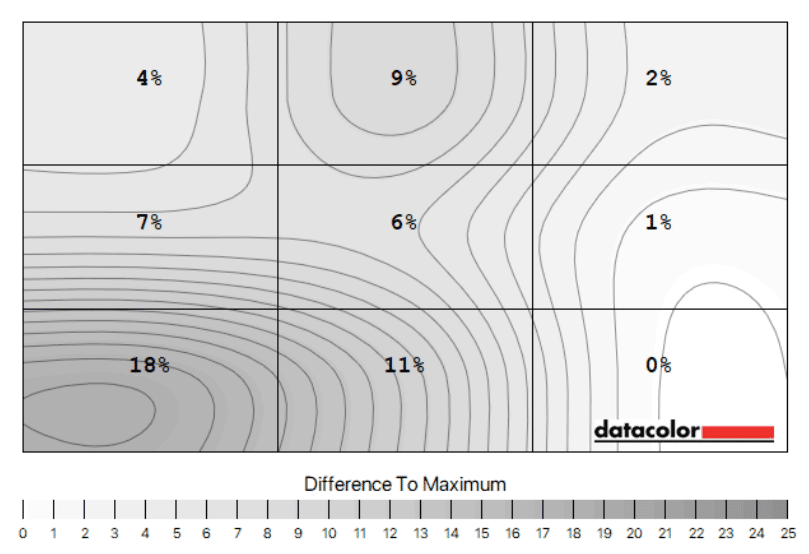 Panel uniformity from the BenQ Zowie XL2566K test sample had some issues in the lower left corner of the screen. It looked dimmer than the opposite side, so it’s quite noticeable in dark scenes where this matters the most. Note that this can vary between every monitor made due to tolerances, so there are better units out there.

The best part about the BenQ Zowie XL2566K is its excellent pixel response time which beats out every 360Hz fast IPS panel out there. It barely shows any blurring by default, but you can further enhance that with its overdrive setting. You can also use its DyAc feature for further clarity, but it will lower the overall brightness of the panel and possibly induce headaches and nausea if you are sensitive to strobing.

The BenQ Zowie XL2566K is still compatible with both FreeSync and G-Sync if you need protection from stuttering and tearing. However, it will lock out the monitor’s DyAc feature, so you need to pick one or the other depending on the games you play. Input lag sits slightly above 2ms, making this one of the fastest E-Sports monitors around.

Thoughts on the BenQ Zowie XL2566K

The BenQ Zowie XL2566K is a fantastic choice for E-Sports gamers who want the fastest and the best gaming monitor for competitive applications. It is not the best in color quality, but it beats its Fast IPS counterparts in pixel response time. It is practically blur-free, but it even has features to enhance that, plus it’s built quite well like most BenQ monitors.

However, the BenQ Zowie XL2566K is pricey compared to some Fast IPS models that barely even go beyond $400. It’s not the best monitor for everyone, but we know serious competitors out there can overlook its limitations in favor of its excellent pixel response time. It’s a great buy for avid E-Sports users, but those who want better eye candy should go with a fast-IPS variant instead.

Search
You are here: Home / Reviews / BenQ Zowie XL2566K Review – Flagship E-Sports Gaming Monitor – Highly Recommended
This website uses cookies to improve your experience. We'll assume you're ok with this, but you can opt-out if you wish.Accept Read More
Privacy & Cookies Policy