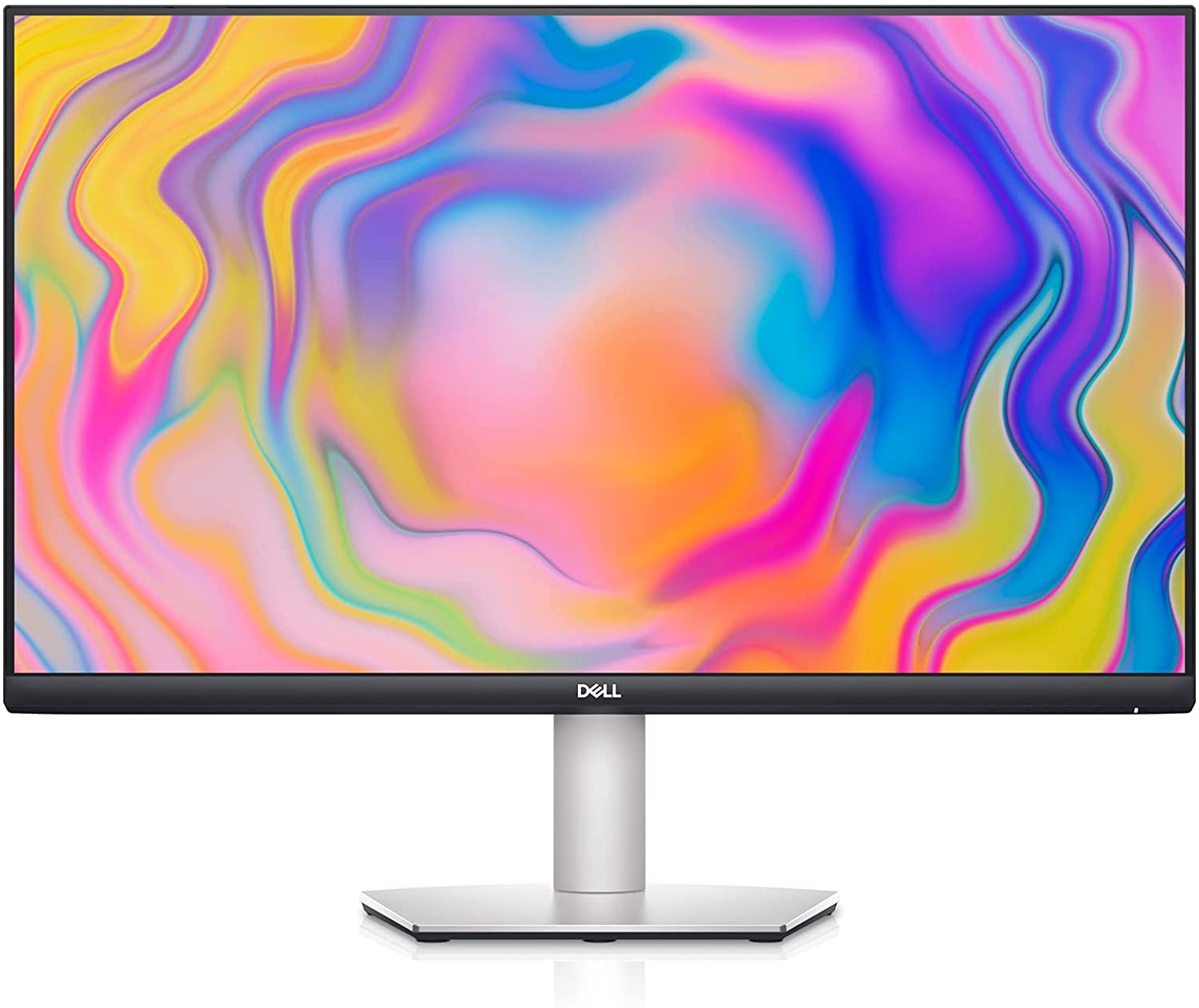 The Dell S2722QC is the latest iteration of the brand’s premiere 4K monitor designed for professionals who want functionality and quality in a single package. It’s designed as an all-arounder, but Dell’s recent releases have been great so far in image quality, making them ideal for editing use. Let’s check how the Dell S2722QC performs to see if it’s the mixed-use monitor you should buy for your next upgrade. 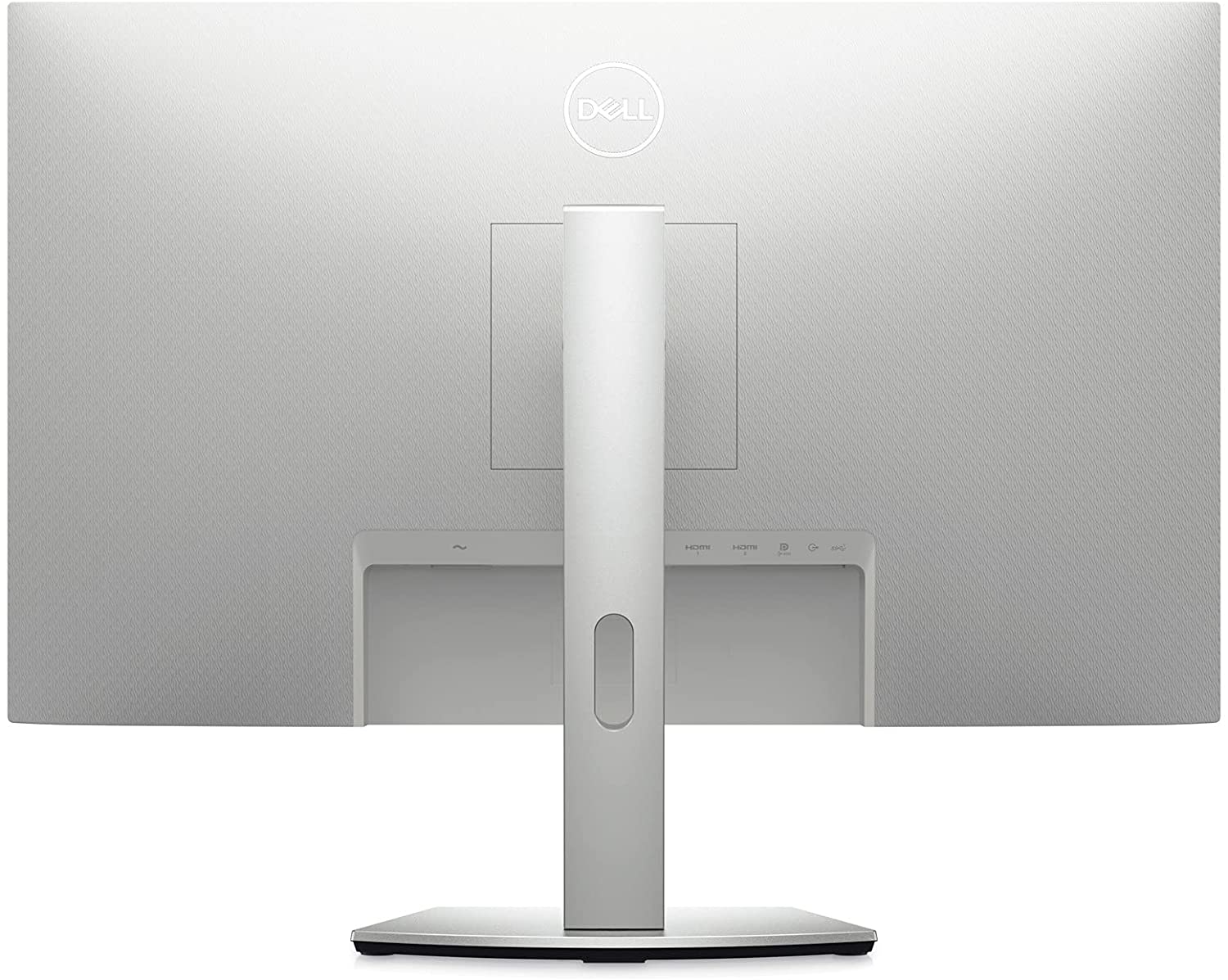 The Dell S2722QC looks sophisticated as ever with its signature design that looks sleek and modern and suited for high-end setups. The device has a matte white and silver combination, although the front has a matte black frame. The monitor is bezel-free on three sides, but you will still see thin borders on the top and sides when it’s in use.

Its noticeable how this new model fares better in the dimensions department compared to its predecessors in the 2020 and below range. The device uses fewer materials to be environmentally friendly, but that doesn’t mean that it’s compromised physically. It also needs less space on your desk, so that translates to less clutter and freedom for other peripherals.

Build quality for the Dell S2722QC is great since it has plenty of reinforcement along and is made with high-quality materials. The monitor is blemish-free when it was unboxed and there were no signs of warping or flexing on its plastic panels. The stand is steady and firm so the screen won’t wobble or sag during regular use.

What we disliked about it is it has OSD joysticks which are time-consuming and oftentimes confusing to use versus a joystick. You don’t have to reach for them since they are under the bottom bezel, but it takes longer to get to a specific page of the OSD since multiple keypresses are necessary. Other monitors at the same price range offer better implementations, although you still get Dell’s Display Manager with this model.

The stand included with the Dell S2722QC offers tilt, swivel, pivot, and height adjustments to suit your needs. It is easy to get a comfortable viewing angle with the default setup, so most won’t feel the need to spend more on the monitor. You use VESA mounts in its place, but it’s only necessary if space is limited or if you have multiple displays.

The Dell S2722QC has plenty of options in the connectivity department, starting with its DisplayPort 1.4 slot and two HDMI 2.0 ports for video inputs. You can also use its USB-C slot with DP Alt Mode and 65 watts of charging power for single cable operation with USB-C laptops. However, 65 watts sometimes isn’t powerful enough to charge a high-spec device while it’s crunching the numbers. 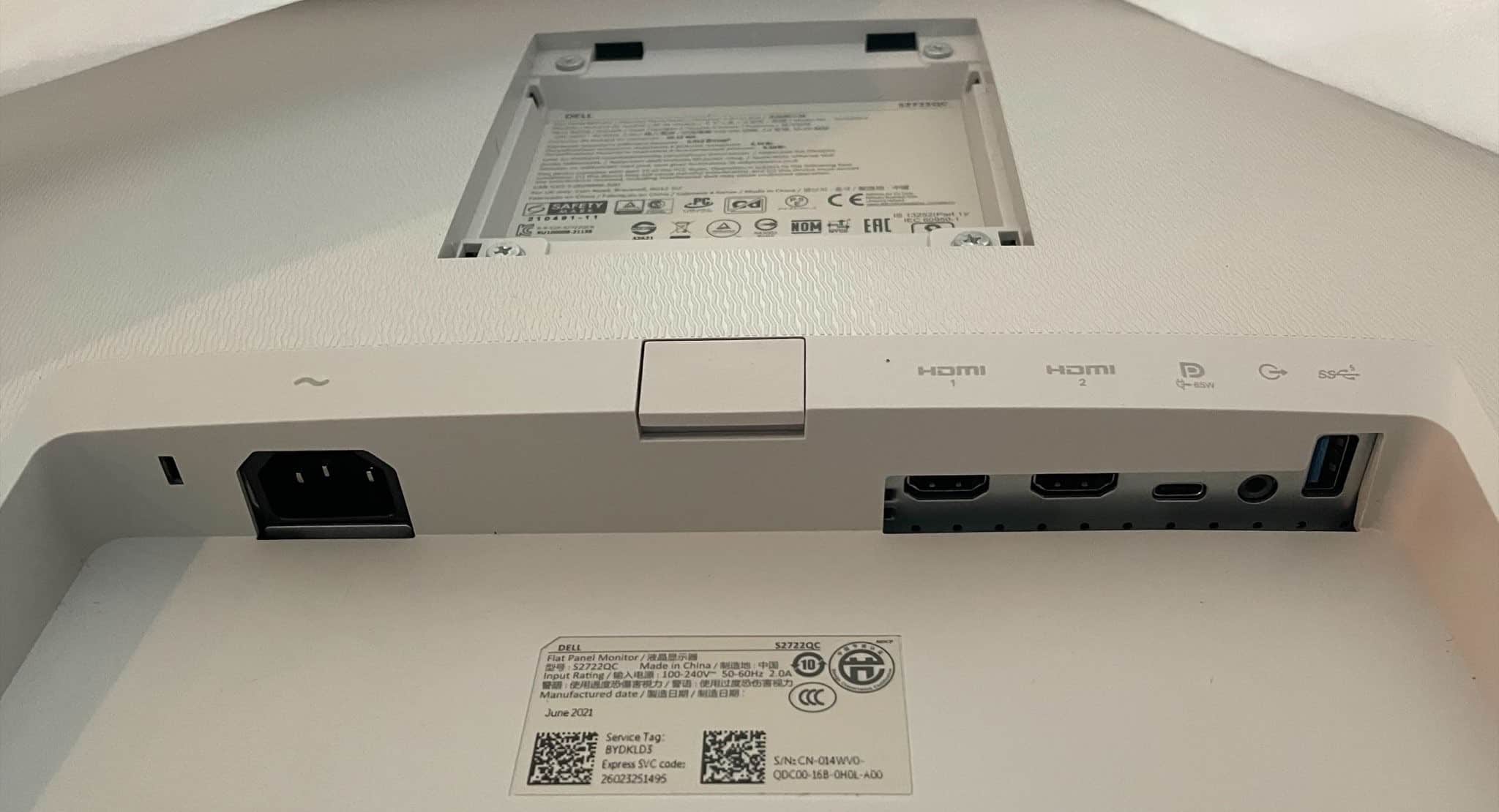 The monitor also has two USB 3.2 gen.1 ports for speedy data transfers or your peripherals. The primary slot is located below the bottom bezel for easy access and it can fast-charge small devices like phones or tablets. You will also find a 3.5mm jack for headphones, but we know that it’s rarely used since the ones on motherboards or soundcards have shielding from interference.

The Dell S2722QC also has a pair of 3-watt speakers below the chassis for your basic audio needs. They can go up to a decent volume level, but you won’t get clear and distortion-free sound if the volume is maxed out. Speakers or headphones will always sound better, but it is nice to have a backup for simple tasks like conference calls.

The Dell S2722QC sports a 27-inch IPS panel with a 3840 x 2160 resolution, a 60Hz refresh rate, and a 4ms response time. The backlight has a 350 cd/m2 maximum while the contrast ratio is listed at 1000:1 like most IPS models. This model supports HDR, but it doesn’t carry VESA certification for that since its specs do not meet the criteria. 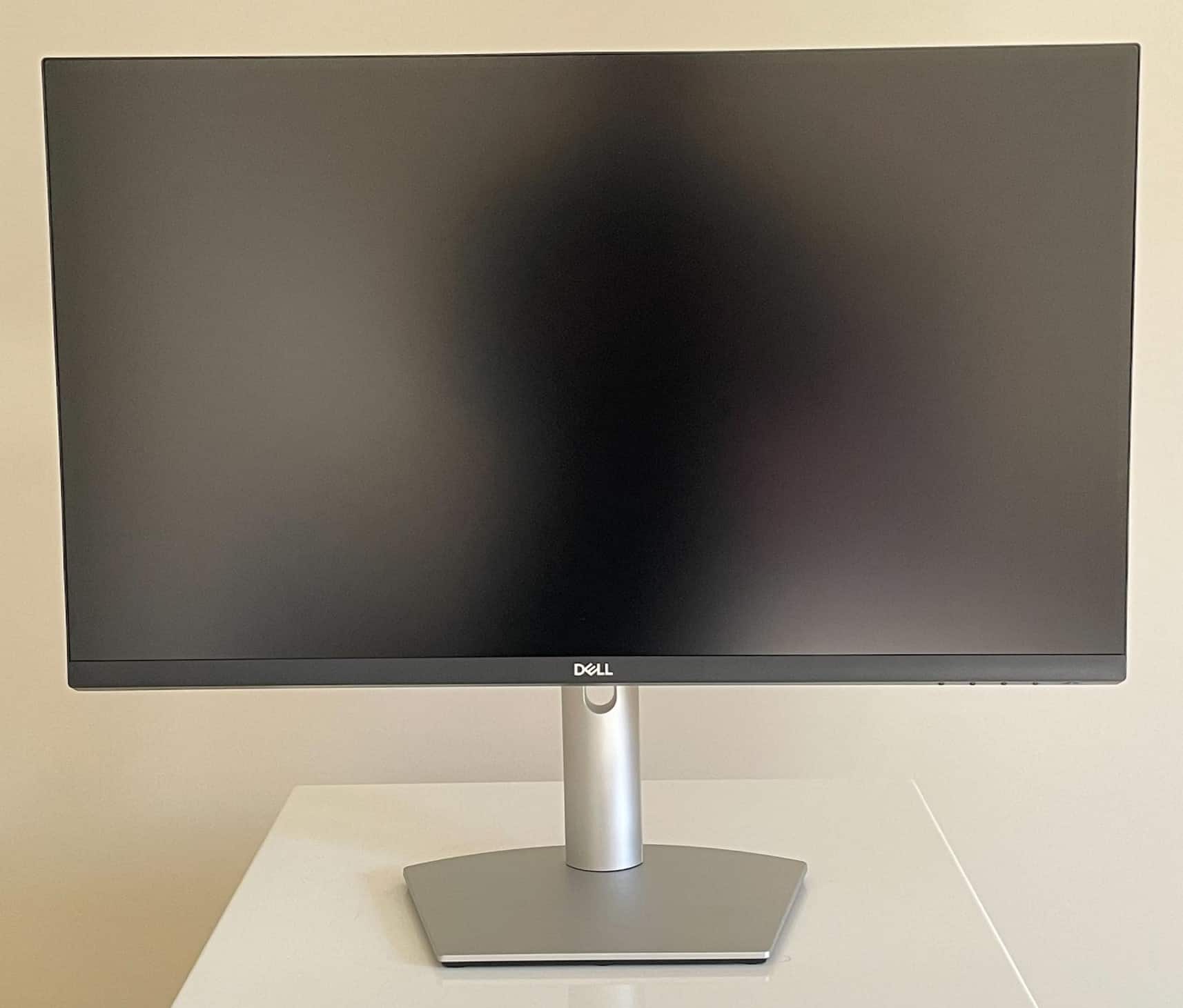 27-inch 4K monitors are extra sharp and detailed so they are great for games, movies, and imaging work. They offer more space as well, but that also means that the higher DPI can make the text less legible or harder to read. 4K fits better on slightly larger 32-inch screens, but you can always work around this minor issue with scaling or by simply zooming in. 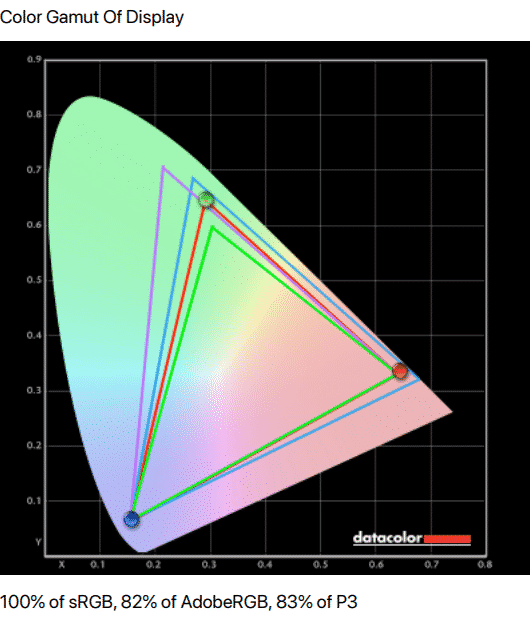 The Dell S2722QC renders a little over 100% sRGB and around 83% DCI-P3 which means it’s vibrant enough for daily use. Its default accuracy with a deltaE average of 2.38 isn’t the best we’ve seen from Dell, but it is already very close to the ideal setting. Most users will be happy with the screen, so only a few minor adjustments like setting the brightness to a comfortable level will be necessary.

Calibrating improved the panel’s color accuracy average to 0.65 which is what you could get from a prosumer display. However, you are going to need a colorimeter to correctly calibrate the monitor to get a result like this. The gadget itself isn’t cheap, so it is only worth getting one if you are into content creation or editing professionally.

Its backlight reached 343 cd/m2 at 100% and its contrast ratio reached 1105:1 at 50% brightness. It can fight off glare in well-lit rooms, but it’s still unable to produce deep blacks like VA and OLED panels which are superior in that regard. However, that’s an accepted limitation of IPS technology, so it is not a deal-breaker if you are in the market for an IPS monitor. 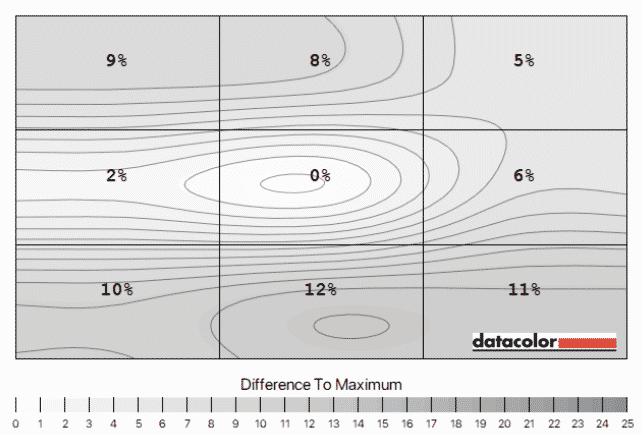 Panel uniformity for the Dell S2722QC had some issues due to a hotspot at the top corner of the screen. The backlight’s spread is also uneven, so some scenes might look dark on one side and lighter on the opposite. Thankfully, this isn’t permanent, so there are better units out there with fewer symptoms such as backlight bleeding or clouding.

The Dell S2722QC has a decent response time for an IPS panel, although the difference with a 144Hz variant is noticeable. The screen is prone to persistence in fast-paced and contrasting transitions due to its limits. Setting the overdrive to its extreme level added overshoot, so we recommend dialing it down or experimenting with the modes to find what works best for you.

The Dell S2722QC is a FreeSync monitor and it also works with Nvidia’s G-Sync Compatible mode via DisplayPort and by forcing it in the Nvidia Control Panel. This is always handy for 4K screens since it’s extra demanding on graphics hardware. Input lag sits at 10ms at 60Hz so it is still snappy and responsive enough for gaming.

Thoughts on the Dell S2722QC

The Dell S2722QC is an excellent 4K IPS monitor if you consider how well-designed it is along with its performance. The monitor looks attractive and it carries in-demand features like USB-C while its IPS panel offers great image quality with more potential when calibrated. These characteristics make it an excellent monitor for daily use, including some professional and gaming applications.

However, what we think is the biggest downside to the Dell S2722QC is its high price which is almost double of what a regular 4K IPS monitor asks for. You have to catch it at a sale or when it’s listed at its minimum advertised price. It is going to be tough to beat in its category if it goes below the $500 price mark.

Search
NEW
POPULAR
You are here: Home / Reviews / Dell S2722QC Review – Premium 4K IPS Monitor with USB-C – Highly Recommended
This website uses cookies to improve your experience. We'll assume you're ok with this, but you can opt-out if you wish.Accept Read More
Privacy & Cookies Policy