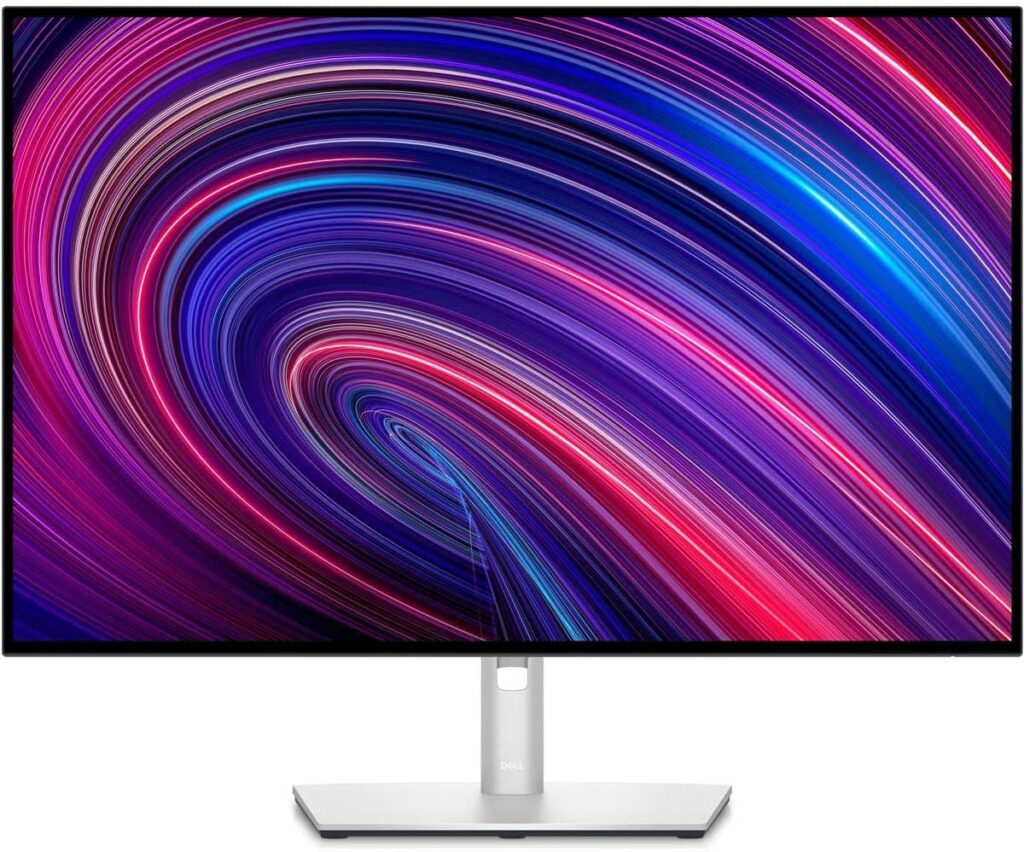 The Dell UltraSharp U3023E is an attractive premium monitor with extra vertical space and plenty of modern features for your convenience. It’s designed and priced like the U3223QE and U2723QE, but it has a 2560 x 1600 resolution that’s squeezed into a 30-inch panel. Let’s check if the Dell UltraSharp U3023E’s performance can justify its steep price tag. 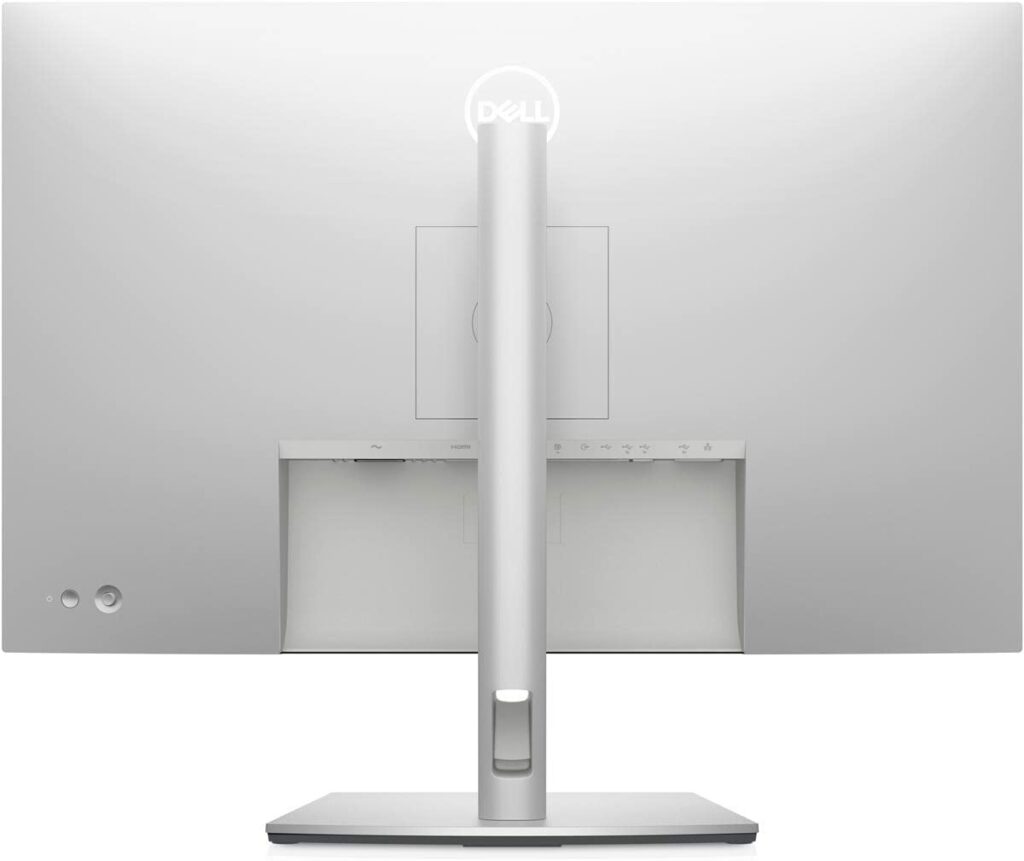 The Dell UltraSharp U3023E follows its series’ latest aesthetic that looks sleek and sophisticated all around. It has a matte black chassis that’s wrapped with a silver outer shell so it will look good next to premium laptops and workstations. The display is bezel-free on all sides, although it still has black inner borders which do not pose as distractions.

Its dimensions are slightly smaller than the regular 32-inch 16:9 variants, but the monitor can still take up a lot of desk space it’s a little over two feet wide so it can encroach on your speakers, although its overall depth is more manageable at 9.1 inches. It is quite heavy at 24.54 pounds thanks to its materials and solid build, so extra care while handling it is necessary.

Its build quality is superb and comparable to what the other UltraSharp monitors in Dell’s lineup can offer. the plastics used are tough and thick enough to prevent flexing and cracking when moderate force is applied. The included stand feels solid and heavy so the monitor won’t wobble like the cheaper variants on the market.

The Dell UltraSharp U3023E has a joystick for the OSD so it is easier to access and navigate its feature-rich OSD. It’s located at the back near the right-hand edge of the chassis so it’s not going to be a struggle while you use it for a minute or two during calibration. Other premium models include remotes with the package, but they are unnecessary add-ons that can raise the price further.

The stand included with the package offers tilt, swivel, pivot, and height adjustments for your comfort and convenience. its base takes up a bit of space and is irregularly shaped, but it is flat so you can use it as a platform for smaller peripherals. you can use VESA mounts, but it’s only necessary if your desk is very small or if there are other monitors on your setup.

The also has plenty of connectivity setups to satisfy modern requirements in the office or at home for remote setups. It includes DisplayPort 1.4 and a DP 1.4 Out slot, an HDMI 1.4 port, and a 90-Watt USB-C port with DP Alt Mode. It also has USB-C slots for upstream and downstream, plus four USB 3.2 connectors for accessories and peripherals.

You will also find an RJ45 LAN port for networking and a 3.5mm jack for speakers, but there are no built-in options. Dell designed this model to work with its slim soundbars that attach to the notches at the bottom of the chassis. It’s intuitive, but the bad news is you have to pay extra for the speaker sets if you want them on your display.

The Dell UltraSharp U3023E sports a 30-inch IPS panel with a 2560 x 1600 resolution, a 60Hz refresh rate, and an 8ms response time. The backlight goes up to 400 cd/m2 while the contrast ratio is listed at 1000:1 like most IPS variants. The monitor isn’t certified for HDR 400 even if it has the necessary specs, but that’s understandable since it is a productivity model.

The 2560 x 1600 is uncommon, and we know many might think that it’s fuzzy or blurry at this size. However, its pixel density of just above 100 PPI still provides great levels of detail and sharpness compared to a 1080p display. You also get more screen space to work with so the monitor can improve your workflow up to a certain degree.

The Dell UltraSharp U3023E renders more than 100% sRGB and around 94% DCI-P3 for stunning colors in all media. But on the other hand, its default accuracy wasn’t great since the deltaE average is at 2.93. It shouldn’t matter for office or entertainment use, but applications such as photo editing and content creation require better performance.

Calibrating the monitor reduced its deltaE average to 0.97 which opens up its suitability for professional imaging use. The downside is you have to purchase a colorimeter if you don’t have one handy, and they aren’t particularly cheap. We can only recommend going the extra mile if you will use the monitor to earn money since it would be impractical to spend more otherwise.

The Dell UltraSharp U3023E’s backlight only managed to produce 367 cd/m2 at 100%, but that’s plenty for daily use. Its contrast was unremarkable since it only reached 1093:1 at 60% brightness. The screen can fight off glare, but it doesn’t represent blacks well especially when it is used at night with the lights off.

Its panel uniformity also had some issues courtesy of backlight leaks at the top edge of the screen. They resulted in clouding issues, but they are most noticeable when dark scenes or backgrounds are on display. Note that this can change between every U3023E made due to tolerances, so there are better units out there.

The Dell UltraSharp U3023E isn’t the most responsive monitor out there, but that’s understandable since it’s a productivity variant. Its slower pixel response time became apparent in fast-paced or contrasting transitions, especially since it’s limited to 60Hz. Setting the overdrive to its Fast setting helped, but using anything higher than that will induce overshoot which is much worse.

The Dell UltraSharp U3023E doesn’t have Adaptive Sync like most of the new UltraSharp monitors. That’s okay and acceptable since it was not designed for gaming, plus we imagine most modern systems can run the resolution smoothly. Input lag sits at 9ms at 60Hz so you don’t have to worry about sluggishness or delays during normal use.

Thoughts on the Dell UltraSharp U3023E

The Dell UltraSharp U3023E is an attractive pick for those who want to upgrade their productivity setups. It’s great for content creation and business use thanks to its vibrant IPS panel with extra headroom. It is well-equipped with connectivity features and a robust design, so we know those who will buy it will not be disappointed.

However, it’s too expensive for a WQXGA monitor if you consider the fact that you can get a capable 4K option at more or less the same amount. The Dell U3223QE isn’t too far off, and something like the Asus ProArt PA329CV can be had for less cash. It performs great and is heavily equipped, but it is not the best choice at the $800 to $1100 price point.

Search
NEW
POPULAR
You are here: Home / Reviews / Dell UltraSharp U3023E Review – Premium 16:10 WQXGA Monitor for Productivity
This website uses cookies to improve your experience. We'll assume you're ok with this, but you can opt-out if you wish.Accept Read More
Privacy & Cookies Policy