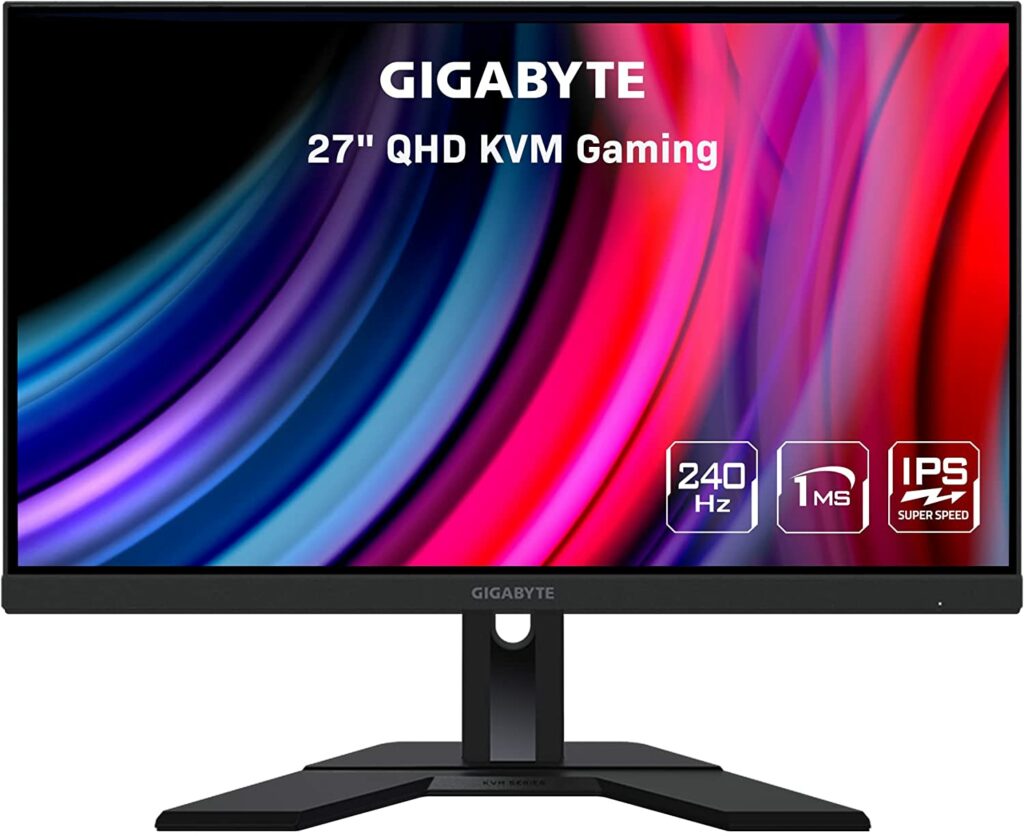 The Gigabyte M27Q X moves to make the 240Hz 1440p segment more affordable for the masses with its tremendous value. Many offerings still cost between $700 to a thousand, but this option sits below the $500 mark. Let’s check if the Gigabyte M27Q X sacrificed a lot to make that low price point happen or if it should be the next value king. 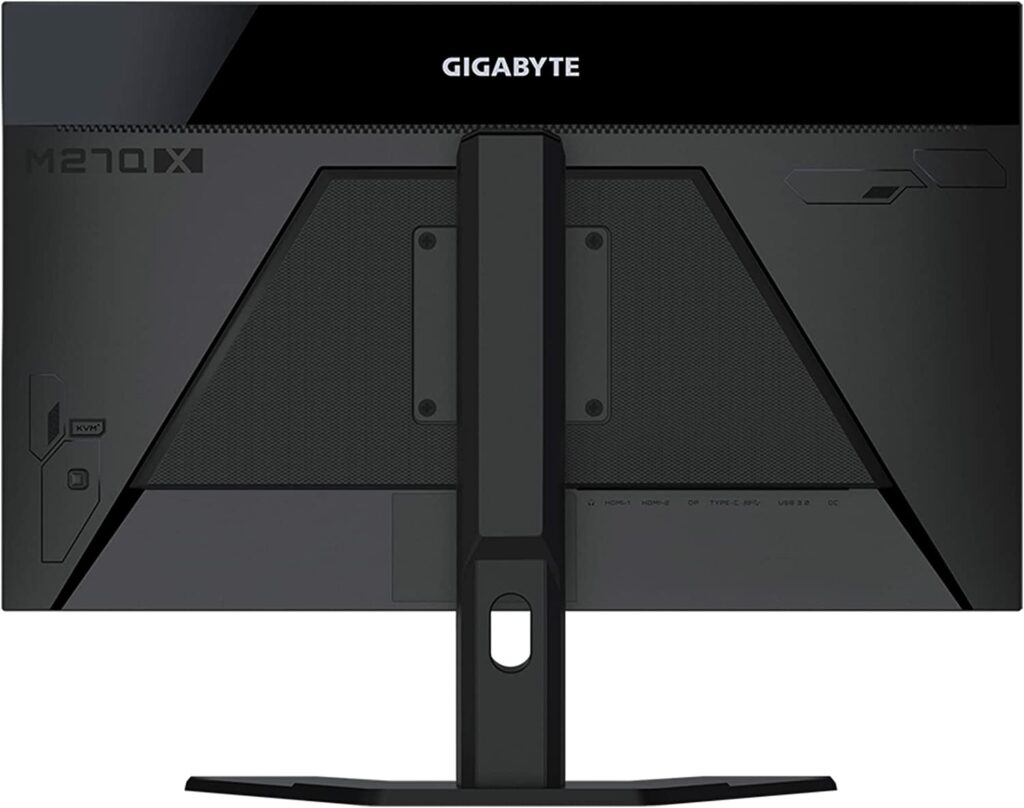 Not much has changed between the Gigabyte M27Q X and its 170Hz predecessor, but that’s okay since aesthetics isn’t a priority for budget models. The device has a low-key matte black finish that is easy to maintain so it will look like its always new. The display is bezel-free on three sides so there are less distractions while you are gaming.

27-inch displays aren’t gigantic by today’s standards, so placement shouldn’t be an issue for most. It only needs 7.63 inches of depth so the only part you got to worry about is its width which can cover large desktop speakers. it weighs in at only 16.71 pounds so its still portable enough to go with you to LAN parties and gaming competitions.

Its build quality is just as good as the other value-oriented monitors in Gigabyte’s lineup. Its mostly made out of plastic, but you’ll know that its well reinforced so it won’t break that easily. The included stand is firm and stable so the screen won’t shake or sag while you are in the heat of battle.

The Gigabyte M27Q X also has an OSD joystick so it should be easy to navigate and manipulate its various settings. You will also find a KVM button on top of it so you can easily switch between devices without changing the monitor or your keyboard and mouse. You also get OSD Sidekick compatibility with this model so you can access some of the settings directly on your OS desktop.

The included stand only offers tilt and height adjustments, but that’s serviceable for most unless you have an unconventional desktop setup. You only need to set a comfortable level to avoid straining your neck while gaming. You can use VESA mounts for more flexibility, but that’s unnecessary unless you have other displays in use.

The Gigabyte M27Q X’s layout includes the usual DisplayPort 1.4 and dual HDMI 2.0 inputs you will find on most 240Hz 1440p models. You also get a USB-C slot with DP Alt Mode, but it can only produce 18 watts of power. You also get two USB 3.0 ports for peripherals, but you need to connect the upstream your mouse with keyboard combination to it and the upstream port to your PC to use the KVM feature.

You also get a pair of 2-watt speakers, but they aren’t really meant for the monitor’s primary purpose. They are quiet and incapable of definition, so most won’t find a use for them while gaming or watching movies. However, its always nice to have an extra set for more basic tasks like conference calls if in case its too hot for a headset.

The Gigabyte M27Q X sports a 27-inch Fast IPS panel with a 2560 x 1440 resolution, a 240Hz refresh rate, and a 1ms boosted response time. The backlight has a 350 cd/m2 typical output, while the contrast ratio is listed at 1000:1 like most IPS panels. This model is certified for HDR 400, but we all know how limited that is in producing imaging improvements.

27-inch QHD monitors are popular upgrades because they offer the best balance between sharpness and legibility. Letters and numbers do not become too small to read, but your field of view gets expanded with more details to make all things look sharper. Note that you will need a potent GPU to push games to 240 FPS at this resolution.

The Gigabyte M27Q X covers more than 100% sRGB and around 94% DCI-P3 for rich and vibrant colors. However, its not as accurate as its predecessor since the deltaE average is at 3.02 so some colors might not look natural. However, this is common on wide gamut monitors and it doesn’t affect gaming or media consumption so gamers will still be happy with it.

Calibrating it reduced the dE average to 1.24 which is considerably better and more natural-looking than the default setup. However, its not easy to achieve a level of improvement like this without a colorimeter, so simply copying settings from the web cannot guarantee a result like that. The gadget itself isn’t cheap and practical if you are only gaming, so we can only recommend getting one if you are into color-critical work.

Its backlight reached 391 cd/m2 in SDR and 459 cd/m2 when it is HDR mode kicks in. Its contrast ratio peaked at 1144:1 at 50% brightness, but its still incapable of deep blacks like VA or OLED panel types in other variants. It also lacks local dimming which is essential if you want true HDR performance, so the mode is mostly unusable.

Panel uniformity for the Gigabyte M27Q X sample did not have major backlight bleeding and clouding issues like many IPS monitors. There is a variance in brightness in some quadrants, but its only noticeable with a colorimeter or if you look close enough in dark scenes. Note that this can vary between every unit due to manufacturing tolerances so its entirely possible to get a unit with worse symptoms.

Its also capable of excellent pixel response so the screen becomes practically blur-free in fast-paced scenes. You only need to set its overdrive to its Picture Quality or Balance setting which works best to clean up the persistence, if you can run games at very high framerates. It’s ideal for competitive games, but you will need a powerful system to keep the monitor happy.

The Gigabyte M27Q X is compatible with both FreeSync and G-Sync so you don’t have to worry about tearing and stuttering. This is handy now since GPUs are still expensive and hard to find, so you might be stuck with an AMD or Nvidia card for the time being. Input lag sits under 3ms at 240Hz, so there is no need to worry about delays while gaming competitively.

Thoughts on the Gigabyte M27Q X

The Gigabyte M27Q X is a fantastic choice if you want a very fast gaming monitor with a higher resolution and a reasonable price. Its not the most accurate Fast IPS panel out of the box, but its lightning fast with eye-popping colors. The device didn’t receive major upgrades but having KVM and USB-C functionality is more important.

The Gigabyte M27Q X has minor issues which are understandable since the brand tried to keep the price as low as possible. Most of them, like the poor color accuracy is a common factor with these monitors, unlike the Aorus-branded variants which seem to be factory calibrated. It’s a great buy if you want fast and affordable in a single package.

Search
You are here: Home / Reviews / Gigabyte M27Q X Review – Value Oriented 240Hz 1440p Gaming Monitor for E-Sports – Recommended
This website uses cookies to improve your experience. We'll assume you're ok with this, but you can opt-out if you wish.Accept Read More
Privacy & Cookies Policy