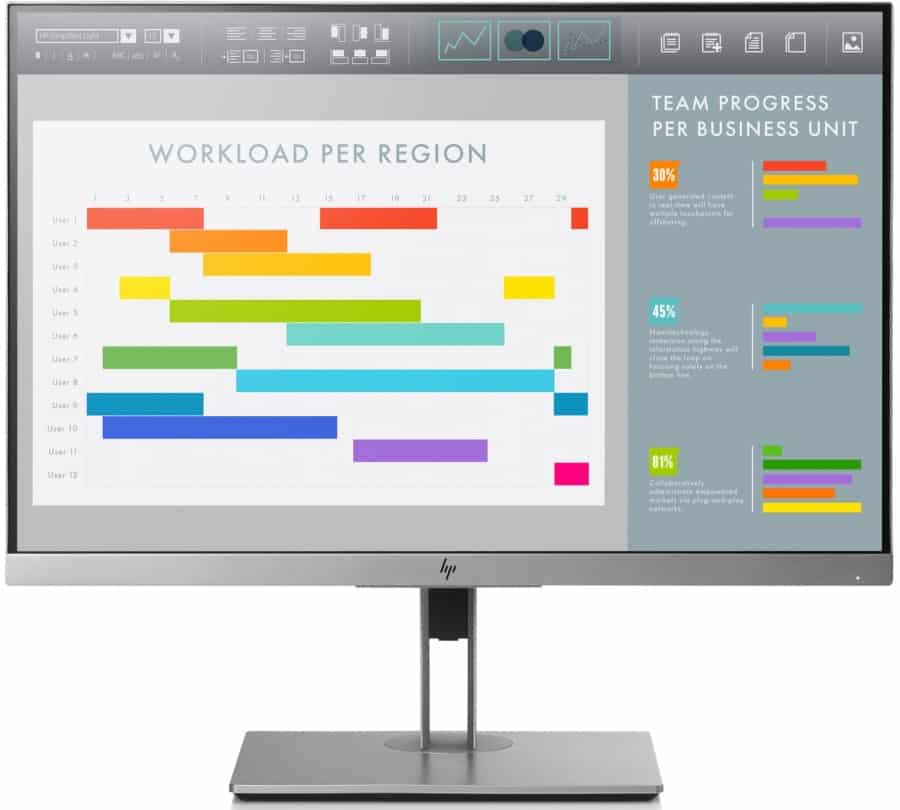 The HP EliteDisplay E243i intends to spruce up your home or office space with its attractive aesthetics and high-end performance. The product emphasizes working comfortably without the need for complications to get the job done. The HP EliteDisplay E243i is competitively priced in a segment with limited options, so let’s check if its potential translates into excellent real-world applications. 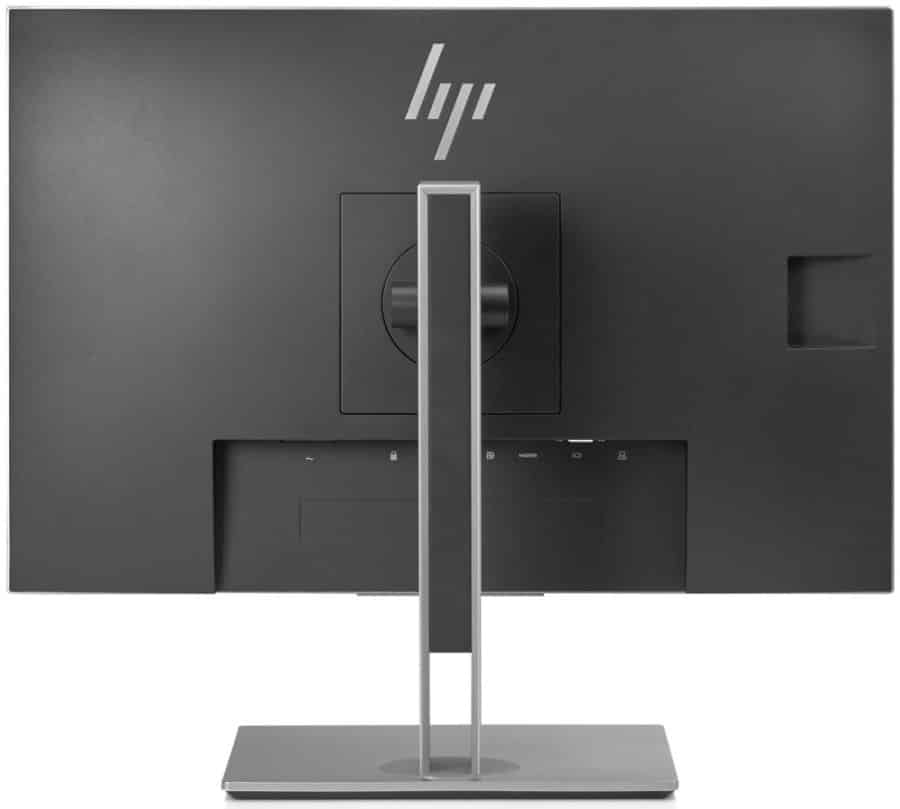 The HP EliteDisplay E243i looks sophisticated and neat thanks to its minimalist aesthetics with very slim proportions. The dominantly matte-silver device looks like a high-end device that fits into studios and executive offices. The display is bezel-free on three sides, giving you a maximized view of the 16:10 screen.

The HP EliteDisplay E243i is slightly bigger than your usual 24-inch 1080p monitor, but most of that size is concentrated on the height of the cabinet. The device doesn’t require an estate-sized lot on your desktop, so multi-head setups are doable. The flat surface of the base also adds a beautiful resting spot for small items such as your mobile phones or even a mini soundbar.

Build quality is more than decent thanks to the excellent materials used in the HP EliteDisplay E243i. The monitor looks fragile at first, but its panels are thick and durable while the stand does a good job of keeping the cabinet in line. There are no cosmetic defects on the review unit, indicating that HP has excellent quality control for its products.

However, we think that HP went backward with their modernist-designed HP EliteDisplay E243i when they opted to use OSD buttons. The placement is convenient and within reach, but not being able to see the buttons will result in miss-presses and mistakes. We always prefer joystick implementations since they are easier to master and much more fluid when trying to navigate various menus and control settings.

The stand on the HP EliteDisplay E243i is one of the most attractive, in our opinion, due to its simple design. The two metal bars supporting the cabinet provide excellent stability, plus they channel the cables neatly towards the rear. You can also tilt, swivel, pivot, and adjust the height of this model, so the ideal view angle is within reach.

You can also swap the included part out for a VESA stand with a 100 x 100 adapter. Finding a suitable solution is easy since the monitor is light and modestly sized, but buying one adds to the total cost of the upgrade. It’s also excellent that HP designed the bolt holes into the chassis instead of asking for more money for a separate adapter like they did with their other models.

The HP EliteDisplay E243i is equipped with just about every connector you will need for day to day use. The panel at the rear includes DisplayPort 1.2, HDMI 1.4, and VGA for video inputs, along with a total of three USB 3.0 ports for accessories. The package already includes a cable for DP, VGA, and USB upstream, so you don’t have to spend on them right away.

One thing the HP EliteDisplay E243i is missing is a pair of built-in speakers that come in handy for home and office use. However, the nature of these add-ons makes them less popular if the user already has a separate set or a pair of headphones since its rare to get good audio quality from them.

The HP EliteDisplay E243i sports a 24-inch IPS panel with a 1920 x 1200 resolution, 60Hz refresh rate, and 5ms response time. The backlight maxes out at 300 cd/m2, while contrast is still at a typical 1000:1. 16:10 screens like this model are noticeably taller, and they look more square-shaped, but the extra vertical space is quite useful if you are using it for productivity.

The pixel density on the HP EliteDisplay E243i doesn’t change much even if there is added space on the screen’s vertical. This means you don’t have to worry about image softening or pixelation like what many complain about on larger 1080p screens. The additional headroom is useful for document processing, but games can also become more attractive since you can see more of its environment.

The HP EliteDisplay E243i posts excellent results when it comes to color fidelity, starting with its 115% coverage of the sRGB gamut. This comes as a surprise since most enterprise monitors meant for office use usually stay at 100%, but we think its a nice advantage to have in this case. Color accuracy out of the box is equally impressive, with the DeltaE average sitting at a very ideal 1.95.

The color temperature on the HP EliteDisplay E243i’s screen is already very close to the ideal 6500K, so there is no need to use a colorimeter to get a balanced image.  The contrast also exceeded our expectations, sitting at a maximum of 1095:1 at reasonable brightness settings. The only aspect that missed its recommended point is the gamma, which sat at 2.1, but it did not have a detrimental effect on the overall appearance of media on the screen.

The HP EliteDisplay E243i did suffer from a bit of backlight bleeding on two corners of the screen. The contrast on the adjacent quadrants is slightly affected, but you will only notice it in darker or all-black scenes. Colors remained even and punchy, but this could change between unit to unit since IPS modules are prone to severe leaking.

The HP EliteDisplay E243i isn’t a gaming monitor so that you will see some ghosting or trailing during moderately fast scenes. The device has a built-in overdrive feature in the OSD, which thankfully manages to alleviate this issue decently. The number 3 and 4 setting do a reasonable job at clearing the trails, but you will get a bit overshoot in some instances.

The HP EliteDisplay E243i is a business or enterprise monitor, so it doesn’t come with FreeSync. G-Sync compatibility automatically isn’t available as well, but we reckon most GPUs won’t struggle too much in most games. Input lag averages at 10ms at 60Hz, so you won’t notice any delays during casual play.

The HP EliteDisplay E243i is an attractively designed office monitor that doesn’t disappoint when it comes to image quality. The color output by default is already at an excellent level, thanks to the contrast and gamut coverage that exceeded our expectations. You don’t need to calibrate this monitor, even if you are going to use it for light editing.

The HP EliteDisplay E243i isn’t great at gaming performance even if its input lag is quite low, but it isn’t designed to be used as such. The lack of FreeSync is a deal-breaker for some, but you should look elsewhere if your purpose is gaming more than productivity.

Search
NEW
POPULAR
You are here: Home / Reviews / HP EliteDisplay E243i Review – 24-inch 16:10 IPS Monitor for Home and Office
This website uses cookies to improve your experience. We'll assume you're ok with this, but you can opt-out if you wish.Accept Read More
Privacy & Cookies Policy