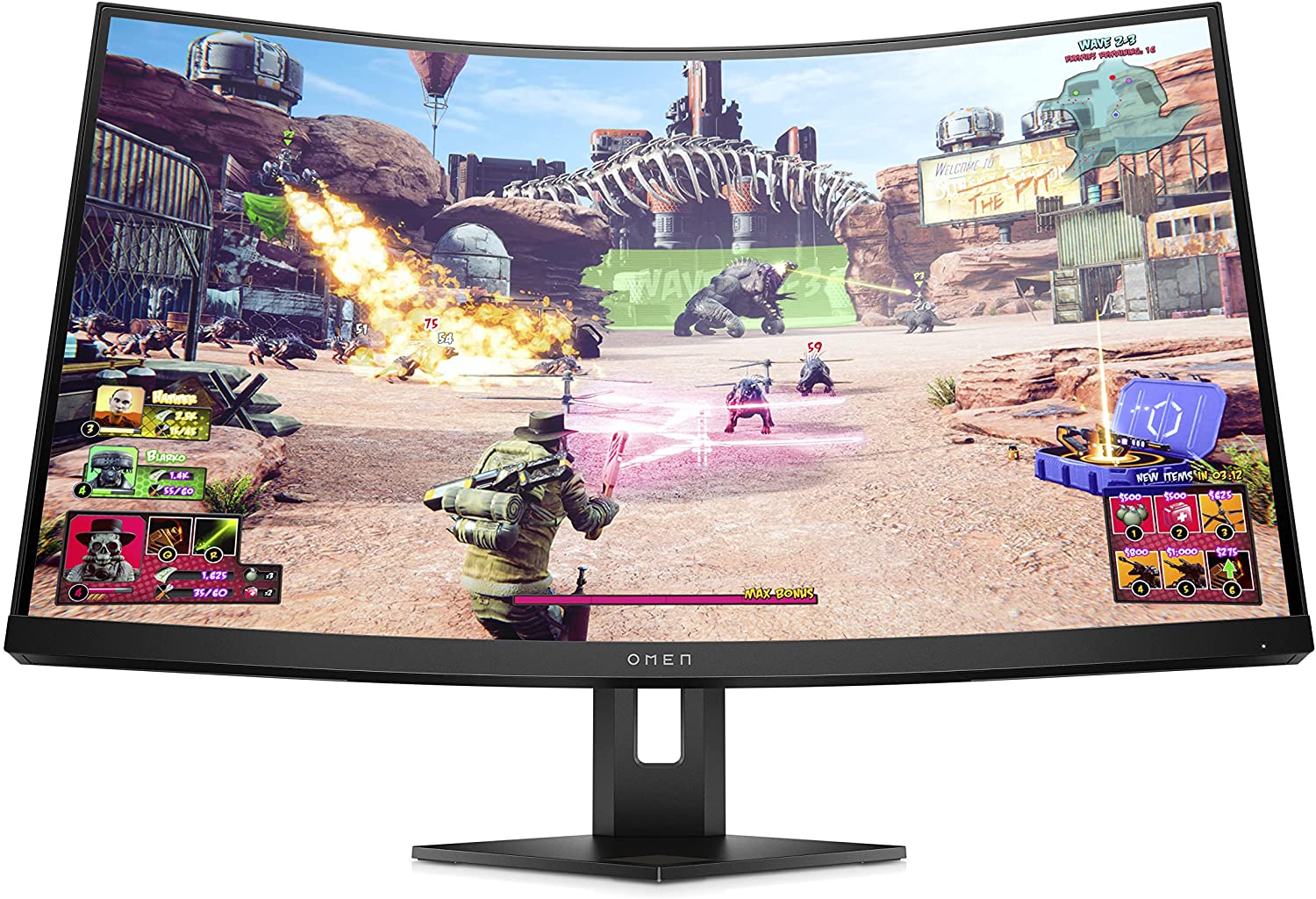 The HP Omen 27c tries to be two things at one time with its speed for E-Sports and its 1000r-curve for immersion. It mirrors most of the Samsung G7’s specifications, but it’s easier to own for most since it’s cheaper. Let’s see how the HP Omen 27c performs to know if it’s the best choice for those who want speed but without the associated high cost. 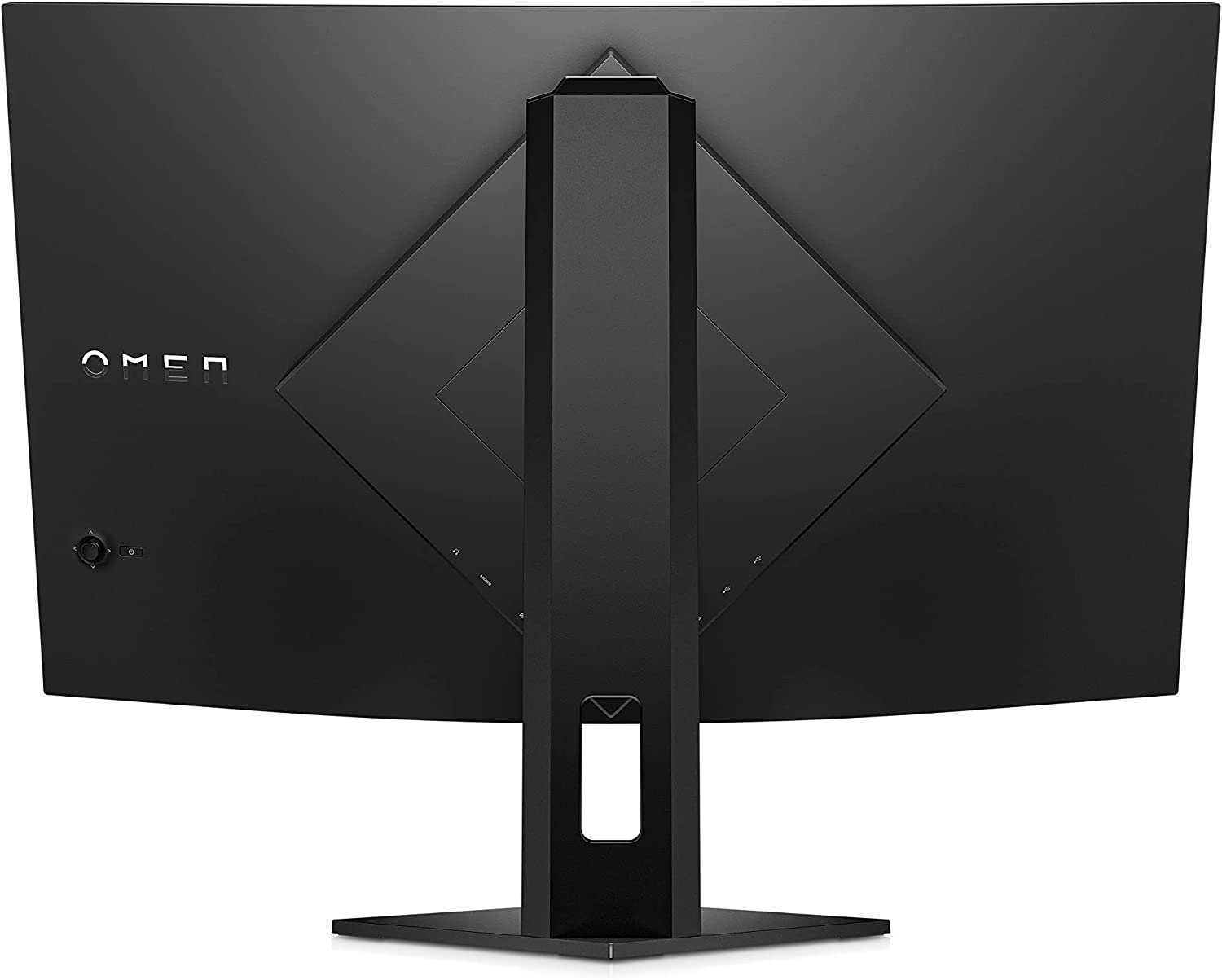 The HP Omen 27c sports a clean and sophisticated look, unlike its Samsung counterpart which has aggressive accents and RGB lighting. The device has a matte black finish that departs from the old design which had dashes of red. The display is bezel-free on three sides, but you will still see minimal inner borders if you look close enough.

Its dimensions and weight are modest compared to its closest competitor since it doesn’t have the unnecessary equipment and decorations. The device needs a little over 10 inches of depth, but that’s mostly because of its diamond-shaped stand. It is not too heavy at 15.45 pounds so you can easily move it around if needed.

Build quality is excellent since the monitor feels like it was made with precision and top-end materials. there are no uneven gaps, cosmetic defects, or deformities on the monitor so it looks every bit like a premium model. The stand is made of metal so it’s both robust and attractive unlike the plasticky ones used on lesser variants.

The HP Omen 27c’s control layout is fairly simple to use since it has a joystick for the OSD and a dedicated button for power. Its located at the back and is accessible on the right side from the front so you don’t have to struggle with finding it. The knob is big enough and it is quite responsive so navigating the submenus won’t be annoying and time-consuming.

The stand included with the HP Omen 27c is perhaps its weakest physical feature due to its limited ergonomics. you can only tilt the monitor or adjust the height, unlike its counterparts which have full adjustability. You can opt for VESA mounts, but it is not entirely necessary unless space is limited or if you have multiple screens. 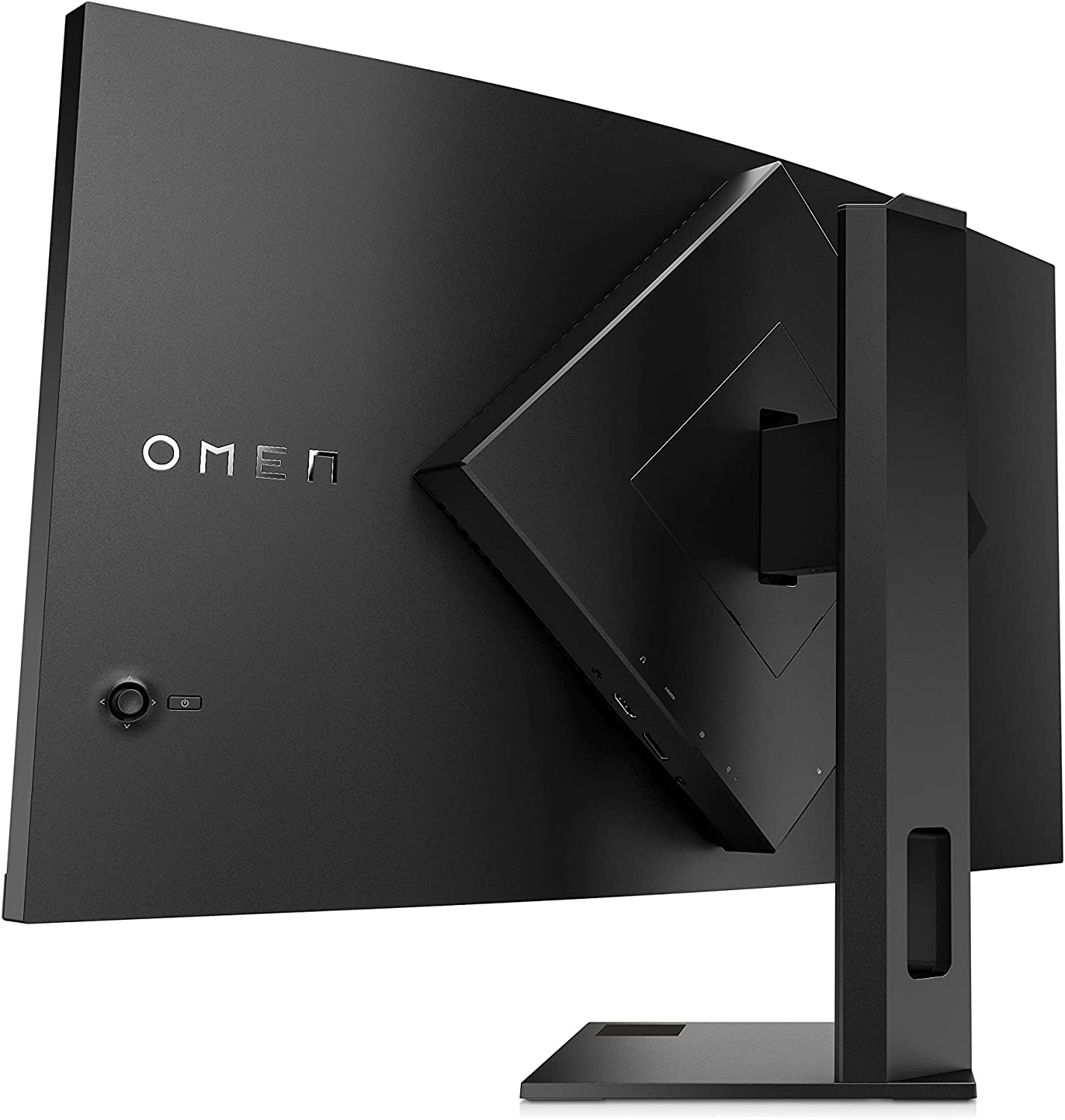 Its connectivity layout also leaves something to be desired, but it has everything you will need for daily operation. It includes a slot each for DisplayPort 1.4, HDMI 2.0, and a USB-C slot which is designed for data upstream only. You also get two USB 3.0 ports for peripherals and a 3.5mm audio jack, but you need to connect the USB-C to your PC to use the former.

It doesn’t have speakers as well, but that’s fine since a monitor like this deserves a pair of decent headsets or desktop speakers. The slim chassis also doesn’t have space to hold anything significant, so adding weak speakers which might raise the price is unnecessary.

1440p is perfect at this size since it offers the best balance between sharpness and legibility or visibility. Most users won’t struggle with reading walls of text or seeing small objects, but the screen will look noticeably crisper with more space to boot. Note that your GPU requirements for games will also go up but it won’t be as demanding as a 4K screen.

The HP Omen 27c renders 100% sRGB and around 90% DCI-P3 for decent vibrancy in games and movies. Its default accuracy is good as well since the deltaE average is only at 2.66, indicating that color errors are minor and mostly unnoticeable. Most gamers will be happy with its default state since the image looks mostly balanced without any noticeable discoloration in the important shades.

Calibrating it with a colorimeter reduced that dE average to 1.02 which is even better and suitable for color-critical work. However, you need the gadget to get this kind of result, and those don’t come cheap. We can only recommend spending the extra if you are into color-critical work, but it would be more practical to go with a special monitor instead if this is important to you.

Its backlight only managed to reach 276 cd/m2 in SDR and around 412 cd/m2 when HDR is active. Its contrast reached 2533:1 at 80% brightness, so it is still capable of deep blacks, unlike its TN and IPS-based counterparts. However, we can’t say we like its HDR capabilities due to these limitations plus it’s not a good choice if your room gets too much sunlight since it cannot fight off glare.

Its panel uniformity had some issues in the top and bottom edges of the curved screen. Some minor backlight leaks added clouding to the display, but they are only visible in all-black or dark images. Note that this isn’t permanent for the entire range due to tolerances, so there are better units out there.

The HP Omen 27c is prone to smearing or blurring like all VA monitors even if it has a 240Hz refresh rate. You need to use its overdrive at its level 3 setting to alleviate this, but it cannot completely eliminate the persistence. Anything higher will induce overshoot, but as always, feel free to use which setting looks best to you.

The HP Omen 27c is compatible with both FreeSync and G-Sync so you won’t be locked to one GPU brand if you want to use VRR. The graphics card market is wild right now so it’s not always easy to get your preferred brand. Input lag sits at 3ms at 240Hz, so there is no need to worry about delays while gaming.

Thoughts on the HP Omen 27c

The HP Omen 27c is a fantastic choice if you want a 240Hz 1440p gaming monitor at the $500 price point. Most alternatives cost at least a hundred or more like Samsung’s G7 models, but they do have some advantages in the main specifications. However, this monitor performs great enough for any type of gaming, and we know a lot of you would like to save money on that price difference.

It does have some limitations you have to live with, starting with the VA panel’s slower pixel response time. It also lacks a few creature comforts, but the most disappointing of it all is its limited USB-C compatibility. However, it is an excellent buy if you simply want a 1440p screen that’s faster than many available options in the market.