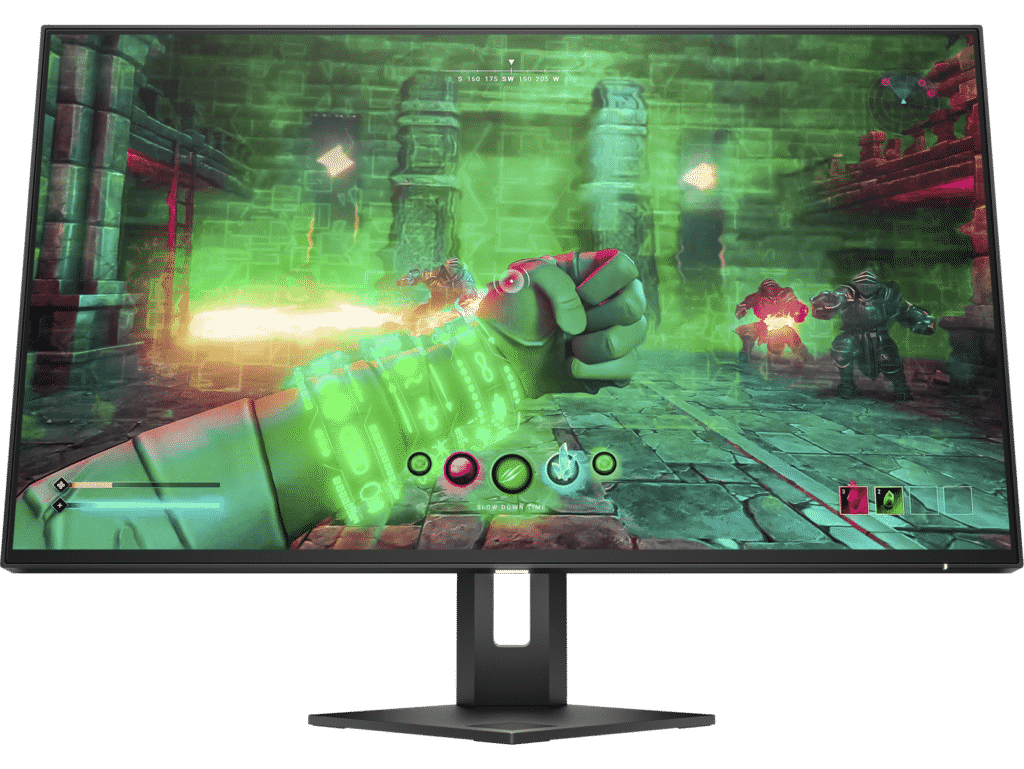 The HP Omen 27u 4K offers 4K 144Hz and HDMI 2.1 for PC and next-gen console gaming in a neat and affordable package. It’s one of the cheapest in its category, and only a few such as the MSI Optix MAG281URF can go head to head with it at the same price point. Let’s see if saving the money by going with the HP Omen 27u 4K is the better and more practical choice. 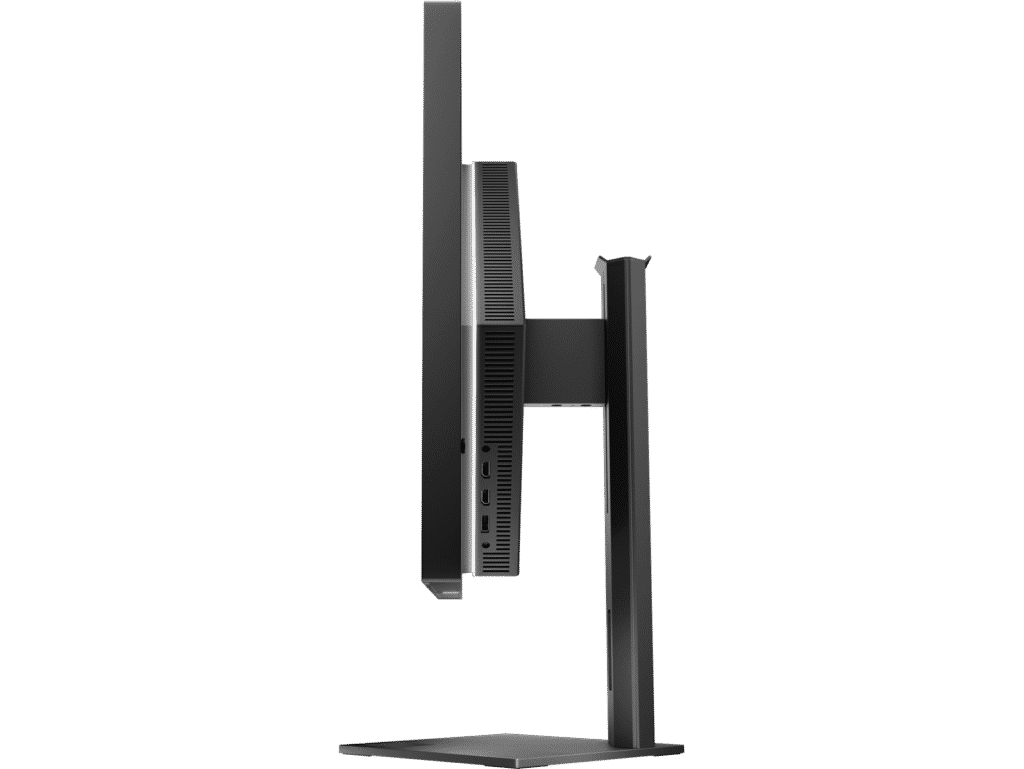 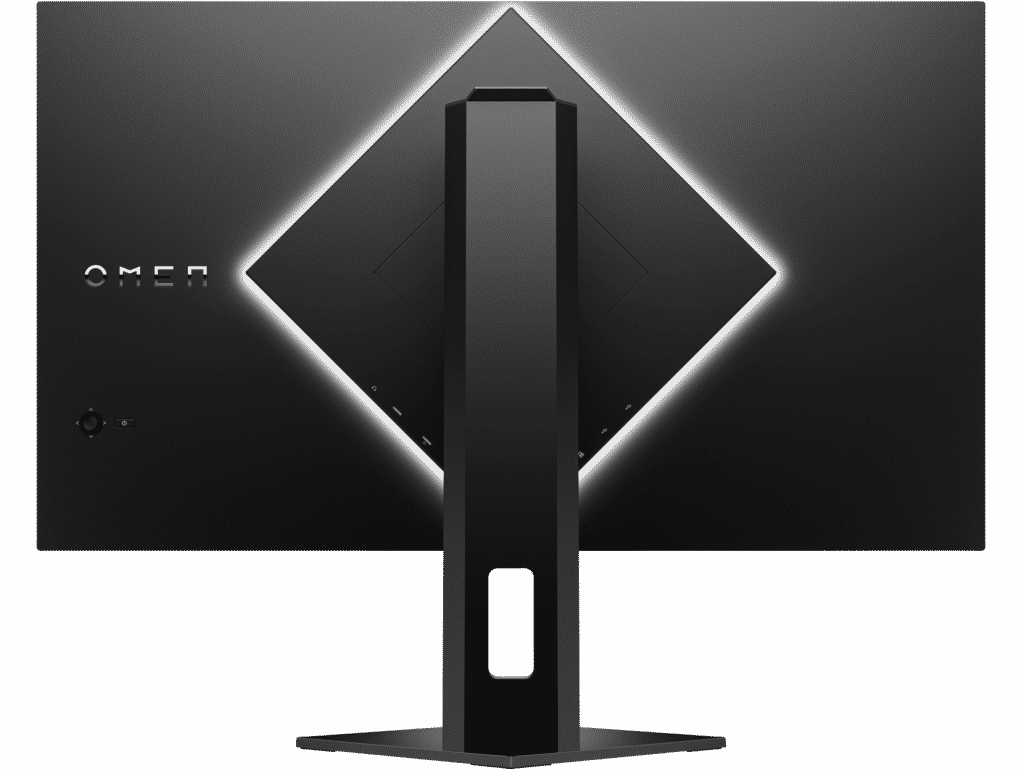 The HP Omen 27u 4K is designed like a business monitor with simpler aesthetics and a clean overall look. The monitor has a matte black finish like most professional displays, but it has Omen branding in some key spots that betray its gamer-centric nature. The display has a bezel-free design, but it still has inner borders which are quite thin and unnoticeable while gaming.

It is not a very large monitor by today’s standards, so most won’t have any issue with setting it up or finding a perfect spot for it on desks. It is not too heavy at 17.24 pounds, so you can move it around easily if you feel the need to reorganize your setup. It needs more than ten inches of depth due to the base design, but it’s thin and flat so it won’t obstruct your other peripherals.

Its build quality is just as good since there were no signs of weakness or cosmetic defects on any of its parts. The plastics used are thick and sturdy so the cabinet doesn’t flex too much and it won’t crack with moderate force. The stand does a good job of keeping the monitor upright so the display won’t sag or shake unless you nudge it accidentally.

The has an OSD joystick that’s accessible from the lower right side of the screen if you are facing it. It’s convenient and easy to use, especially when compared to some Omen monitors that still rely on mush buttons or keypads. Some options like the BenQ Mobiuz EX3210U even include remotes, but that’s mostly unnecessary for desktop use. 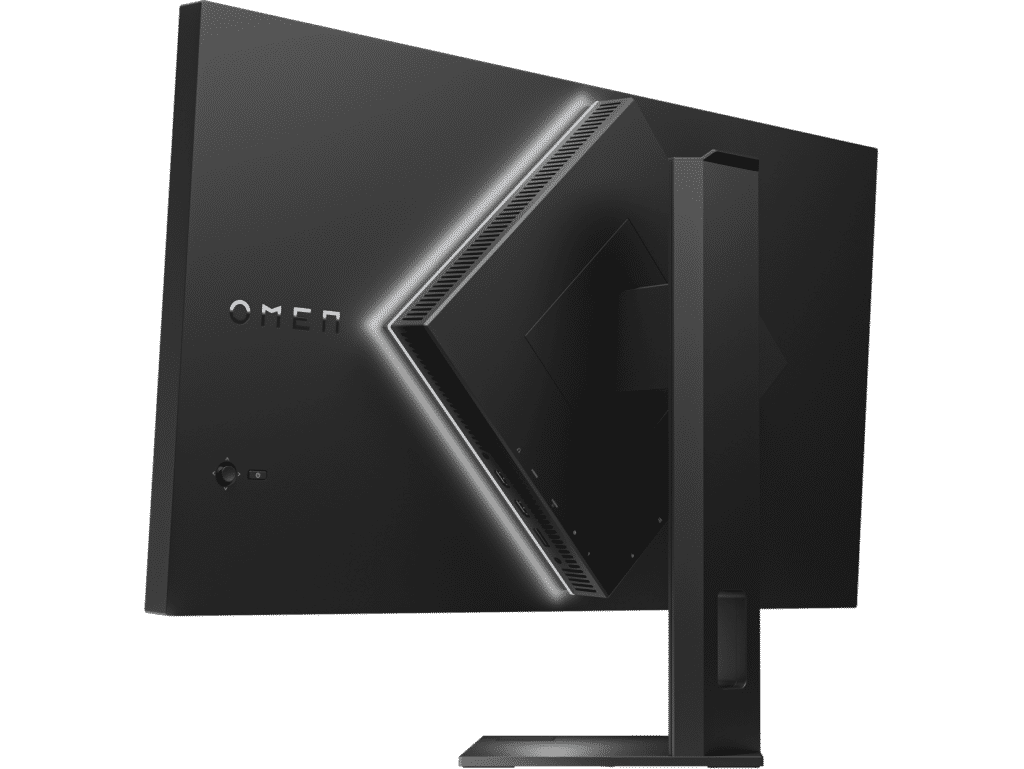 It is also worth mentioning that this model has RGB lighting around its diamond=oriented bulge at the back. It’s not that bright, but it is usable as a bias light if you game at night with the lights turned off. Also, you need to use HP’s Omen Light Studio to sync up the lights or select colors and themes, but the app only works with HP products.

The stand included with the package only offers tilt and height adjustments, but that’s acceptable for a budget model. It’s all you will need if this is the only monitor you will use, but multiple display setups could at least use swivel adjustments. You can use VESA mounts, but that’s only necessary for some instances.

The HP Omen 27u 4K has DisplayPort 1.4 for 4K 144Hz on PC, but it also has an HDMI 2.1 slot for 4K 120Hz on the latest gaming consoles. The HDMI slot is limited to the 2.0 standard, unlike many of its competitors which have two HDMI 2.1 slots to make them more flexible for multi-platform gamers. You also get two USB 3.2 slots for peripherals, a USB-C slot for data, and a 3.5mm jack for audio equipment.

What’s missing from it it’s a pair of built-in speakers which you will most likely find on its closest competitors. However, that’s understandable since this model has a lower starting price, so it’s understandable that some features had to be omitted. It is also a fact that gamers prefer headsets while playing since they are more immersive and detailed than tinny built-ins.

The HP Omen 27u 4K sports a 27-inc IPS panel with a 3840 x 2160 resolution, a 144Hz refresh rate, and a 1ms boosted response time. Its backlight has a 450 cd/m2 maximum while the contrast ratio is listed at 1000:1 like most IPS panels. This model is HDR 400 certified, but we all know how limited that is when it comes to imaging improvements.

27-inch 4K monitors are ideal for gaming and media consumption due to their tight pixel density. Graphics and videos will look sharp and detailed, but legibility and visibility can also suffer because of that. You can use scaling, but it can be annoying if it doesn’t work perfectly with some programs.

The HP Omen 27u 4K renders 100% sRGB and 94% DCI-P3 for stunning colors and full saturation. It is factory-calibrated like many HP monitors, so its deltaE average was only at 1.37. Most users won’t need to calibrate the monitor right away since it’s already balanced and natural-looking despite the extra color depth.

Calibrating it reduced the deltaE average to 0.89 which is something that you would normally see on prosumer variants. However, it’s a minor improvement for untrained eyes so it won’t be appreciable for games and movies. It’s only necessary if you will use the monitor for editing work and content creation, but it is impractical for anything other than that.

The HP Omen 27u 4K reached 405 cd/m2 in SDR and 432 cd/m2 when it’s HDR mode kicks in. However, its contrast peaked at 1137:1 at 50% brightness, but it is still unable to produce deep blacks like VA panels or the IPS models which have special backlights. These results also mean that the monitor’s HDR feature is quite limited, so most will probably dislike using it for their favorite titles.

One of its flaws is its panel uniformity which had some backlight leaks at the screen’s edges. They add clouding in dark scenes and become more noticeable when the monitor is used with the lights out. Thankfully, this is a random issue created by manufacturing tolerances, so it is entirely possible to get a better unit.

Its pixel response time isn’t perfect, but blurring and persistence are limited and unnoticeable if your framerate is high enough. You only need a modest amount of overdrive to help it lessen the minor smudges in fast or contrasting transitions. We don’t recommend using the maximum level since it will add overshoot.

The HP Omen 27u 4K is compatible with FreeSync Premium Pro, but it is also compatible with Nvidia’s G-Sync. This is handy for a high-resolution monitor since you can use any commercial GPU and not worry about tearing and stuttering. Input lag is slightly higher at 8ms, but it’s still fast and responsive enough for competitive play.

Thoughts on the HP Omen 27u 4K

The HP Omen 27u 4K is a great choice if you want 4K 144Hz and HDMI 2.1 but would rather avoid the high price it commonly commands in the current market. It sacrifices some features, but what’s most important is its vibrant and responsive IPS panel that is perfectly suited for gaming. It is well-designed so it has superb aesthetic value, especially for those who want lighting effects to match their builds.

However, it isn’t perfect since some sacrifices had to be made to lower its price point and make it more competitive. Its single HDMI 2.1 slot and limited USB-C slot pales in comparison to what others offer, so there are pros and cons to consider. But overall, it’s a great pick for PC and next-gen console owners who want to enjoy games in 4K with high refresh rates.

Search
You are here: Home / Reviews / HP Omen 27u 4K Review – Affordable 4K 144Hz Gaming Monitor with HDMI 2.1 – Recommended
This website uses cookies to improve your experience. We'll assume you're ok with this, but you can opt-out if you wish.Accept Read More
Privacy & Cookies Policy