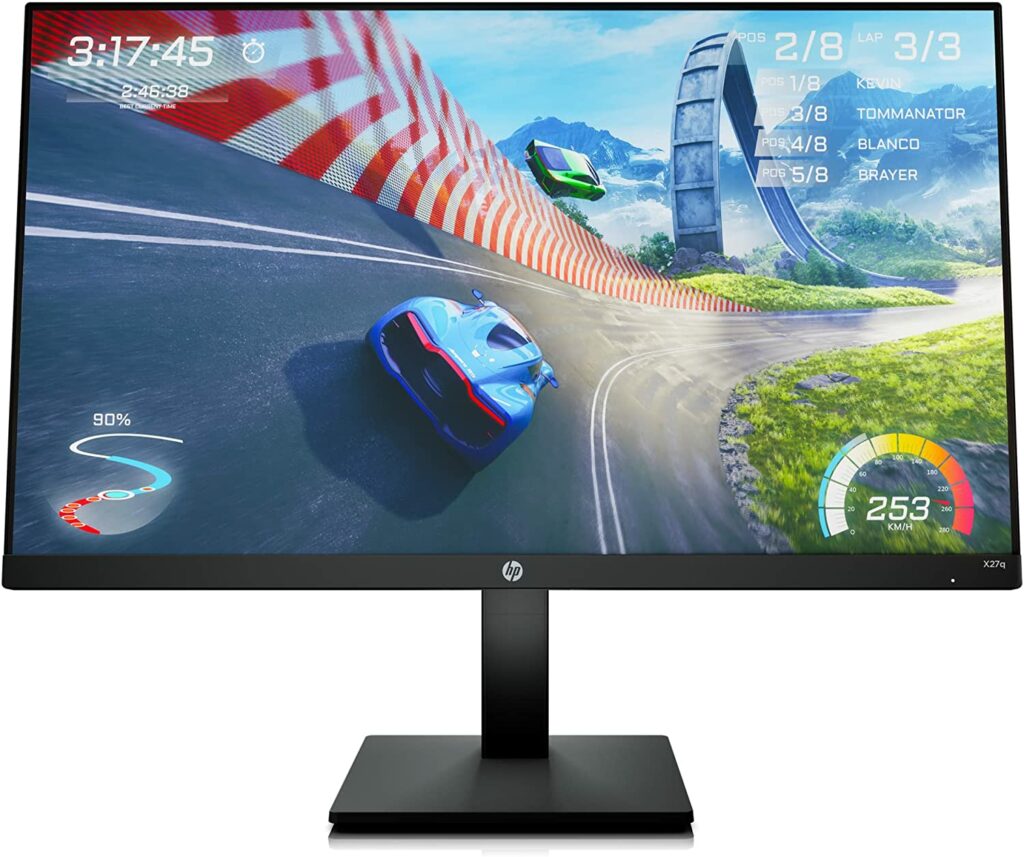 The HP X27q is one of the cheapest 165Hz 1440p monitors you can get that is using IPS instead of VA panels like the X27qc. It is not the most feature-packed or aesthetically unique out there, but it satisfies the basic requirements of a mid to high-end gaming setup. Let’s take a closer look at the HP X27q to know if it has disadvantages or if it’s lining up to become a best-seller. 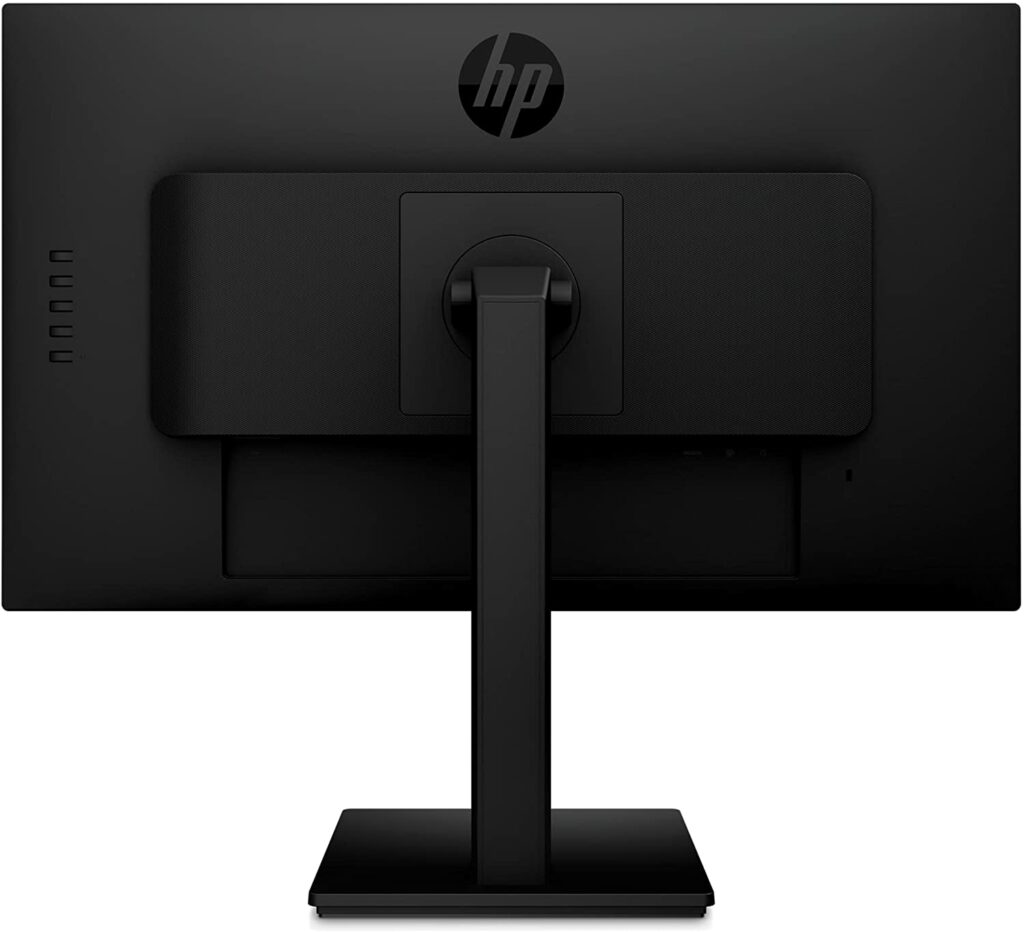 The HP X27q isn’t part of the Omen gaming line, so it sports an even simpler aesthetic which makes it look like a business monitor. It has a matte black finish which looks clean, plus it is very easy to clean and maintain for that always new look. It has a three-side bezel-free design, but it still has inner borders on the top and side edges.

27-inch monitors aren’t considered gigantic by today’s standards, but their two-foot widths can still surprise some users. It’s not ideal going up in size if you have a small desk, so measure your free space first if you can accommodate it. it only weighs 13.89 pounds, so it’s portable enough to be brought to LAN parties.

Its build quality is decent even if it doesn’t have the premium elements you would normally find on alternatives that are branded for gaming. It can feel cheap at times due to the all-plastic build, but it’s still durable enough so it won’t easily crack or flex. The included stand isn’t the most stable we’ve seen, but it’s firm enough so the screen won’t suddenly sag or wobble.

One downside of going with a budget model like this is its OSD layout which uses mushy buttons instead of a more convenient joystick. The keys are in an awkward position at the back, so it can get annoying if you are calibrating it. However, it’s a minor inconvenience we’re willing to live with, provided that the price is this low.

The stand included with the HP X27q offers tilt, pivot, and height adjustments for your convenience. It’s easy to get a comfortable viewing angle with the default setup, although it is strange that swivel adjustments aren’t included. You can use VESA mounts as well, but they are unnecessary unless you have multiple screens or if your desk space is limited.

Another aspect that took a hit to help drop the price is the HP X27q’s connectivity layout. It only includes DisplayPort 1.4 and HDMI 2.0, plus a 3.5mm jack for your headphones. To be honest, that’s sufficient for most instances, but the increasing sophistication of builds can sometimes require more. But again, this is a minor issue if you consider how affordable this monitor is.

It also doesn’t have speakers, but that’s mostly because of its very low price compared to its competitors. Headsets and desktop speakers will sound better and more immersive so the product’s primary audience will most likely prefer them. Built-ins are useful for basic tasks or as secondaries, but many users do not even bother using them since their outputs are usually limited.

27-inch monitors are considered a sweet spot in the market due to their balanced pixel density. Games and movies look sharper and more detailed, but legibility and visibility do not suffer as much as it does on a sharper screen. It is great for all-around use and you don’t need top-end GPU power to run most games at high framerates.

The HP X27q renders 100% sRGB and around 91% of the DCI-P3 gamut for rich colors and saturation in games and movies. it is not accurate out of the box since it has a high deltaE average of 3.12, but that’s reasonable for a budget model. Most affordable options do not go through factory calibration, but that doesn’t mean that they are entirely bad, especially for gaming.

Calibrating it reduced the dE average to a more reasonable 1.66. but it is still nowhere near the results you could get on a premium option. You also need a colorimeter to achieve an improvement like this, and spending the extra on them isn’t practical if you will only use it on a budget gaming model. Most users will be happy with this display and we recommend going with a higher model if accuracy is a priority.

The screen’s backlight reached 391 cd/m2 at 100% but it pumped up to 411 cd/m2 when the monitor’s HDR mode kicked in. However, its contrast is limited to 921:1 at 50% brightness so it cannot produce deep blacks. The monitor’s HDR mode didn’t help since it doesn’t have a specialized backlight, so most would probably just use the monitor for SDR gaming.

Its panel uniformity had some minor backlight leaks at the top edge of the screen. It resulted in clouding issues during dark scenes, but it’s mostly unnoticeable when it is putting out full-color images or white backgrounds. Note that this can change between every monitor made due to tolerances, so it’s entirely possible to get a better unit.

It is also not the fastest IPS gaming display we’ve seen since it still has some blurring and persistence in select instances. Setting the monitor’s overdrive to its 2nd level helps in reducing it, but be wary of pushing it higher since level 3 will already add noticeable overshoot. Most gamers won’t notice the pixel response time then, but trained E-Sports users might want a better display.

The HP X27q is compatible with FreeSync and G-Sync so you don’t have to worry about losing VRR functionality. It is handy to have both since AMD and Nvidia have compelling 1440p GPUs and you won’t get stuck with just one brand. The average input lag sits at 4ms at 165Hz, so it’s just as responsive as the other IPS gaming monitors that are available right now.

Thoughts on the HP X27q

We love how affordable the HP X27q is even though it includes some minor limitations in some aspects. It is bright and vibrant, plus it has all the essential gaming features such as FreeSync and G-Sync compatibility. It’s not flashy, but its modest aesthetics and decent build quality are still widely preferred compared to RGB-laden premium models.

However, you might want to consider the penalties you get by saving that extra hundred or so on this monitor. It is not the fastest and most ideal for competitive gaming, plus it lacks color optimization which is quite common with the latest releases. However, it is hard to argue with the more or less $250 price tag which usually only belongs to 1080p models.

Search
NEW
POPULAR
You are here: Home / Reviews / HP X27q Review – Affordable 165Hz QHD Gaming Monitor
This website uses cookies to improve your experience. We'll assume you're ok with this, but you can opt-out if you wish.Accept Read More
Privacy & Cookies Policy