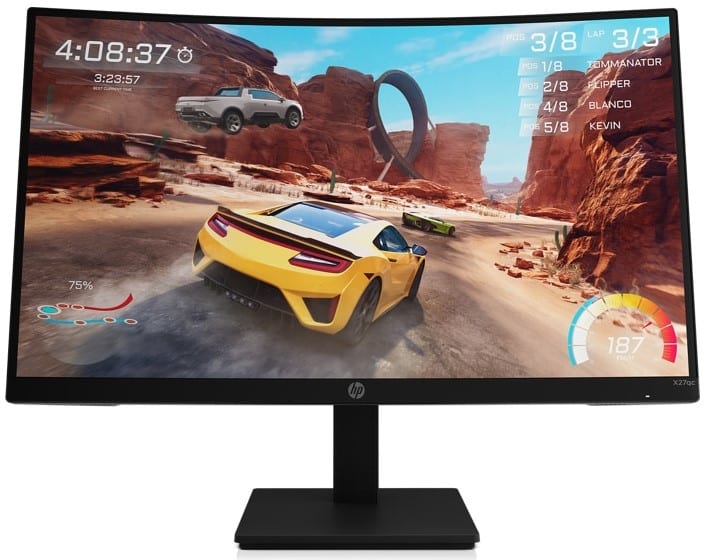 The HP X27qc is an attractive pick for thrifty gamers who want high refresh rates without the extra chaff a premium variant offers. It is one of the cheapest 1440p gaming monitors available today, but it uses VA technology which is known to be slower in pixel response time. Let’s check out how the HP X27qc performs to know if it will suit your needs and prevent you from spending more cash. 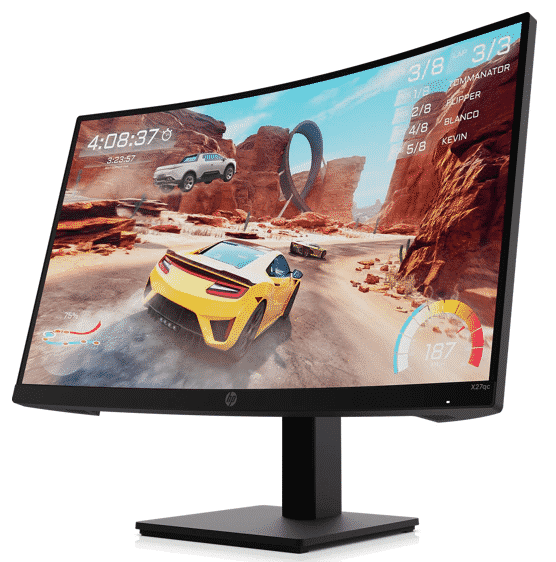 The HP X27qc doesn’t have the gamer-centric design of its Omen series counterparts so it’s easy to mistake it as an office display. The device has a matte black chassis which looks discrete and is very easy to clean and maintain. The display is bezel-free on three sides so it looks neat even if you have thin inner borders that show up when it is powered on.

It has modest proportions for its size, but the 1500r curve adds a bit of bulge to its cabinet. The monitor only needs 8.33 inches of depth so it shouldn’t be too intrusive on your desk especially since its flat base can be used for peripherals. It’s not too heavy at 15 pounds so setting it up will not require an extra pair of hands.

Build quality for the HP X27qc is surprisingly good even if it’s seen some major cost cutting to meet its low price point. The monitor is mostly made up of plastic, but it feels sturdy and it won’t crack or flex under normal circumstances. The included stand is firm and stable so it doesn’t’ wobble or sag while you are in the heat of battle.

One downside of buying budget monitors like the HP X27qc is its use of OSD buttons instead of joysticks. The latter is easier and quicker to use since it doesn’t involve multiple key presses to get to a specific sub-menu. Its forgivable in this case, but many brands have shifted to the better option due to customer and reviewer feedback.

The stand included with the HP X27qc only offers tilt and height adjustments so its limits some of your setup options. However, that’s sufficient for single monitor use since you only have to center the screen and raise or lower its height according to your eye level. You can also swap this part out with a VESA mount, but that’s unnecessary in most cases.

The HP X27qc’s connectivity layout has also seen its share of cost-cutting, although it still has the essentials for daily use. It only includes one DisplayPort 1.4 and two HDMI 2.0 ports, along with a 3.5mm jack for headphones. Most wouldn’t need USB hubs for typical setups, but they can be useful for cable management as well.

It is worth noting that you don’t get built-in speakers with the HP X27qc so its price could go as low as possible. That’s okay since its intended audience will most likely prefer headsets, plus built-ins don’t usually sound great for gaming anyway.

The HP X27qc sports a 27-inch curved VA panel with a 2560 x 1440 resolution, a 165Hz refresh rate, and a 1ms MPRT response time. The backlight has a 350 cd/m2 rating while the contrast ratio is listed at 3000:1. The monitor doesn’t have fancy features like HDR, but it does advertise smooth and immersive visuals courtesy of the panel’s specs such as its curvature.

1440p is the perfect resolution for a monitor of this size since it presents the perfect balance between sharpness and visibility. You get a noticeable upgrade in the level of detail and crispness, but legibility doesn’t suffer too much as it does on 4K screens. It is also less demanding to play games with it so you can get by with a good midrange card.

The HP X27qc renders more than 100% sRGB and around 83% DCI-P3 which are plenty for a budget monitor. Its default accuracy isn’t perfect, but the deltaE average of 2.61 is within an acceptable range, especially for budget gaming displays. The screen has a slightly cool tint, but it still looks good overall in most games.

Calibrating the HP X27qc reduced its dE average to a more pleasant setting with a deltaE average of 1.43 looks even better. However, the improvement isn’t readily visible to untrained eyes, so buying a colorimeter to achieve a modest improvement isn’t worth it. There are better options like the Asus VG27AQL1A if you are looking for something usable for editing work, but those cost at least a hundred bucks more.

The HP X27qc’s backlight reached 521 cd/m2 which is considerably higher than the original spec sheet. Its contrast ratio is just as impressive, reaching as much as 4323:1 at 50% brightness. The screen can produce deep blacks and rich colors, plus it would be a good HDR monitor if it had local dimming.

However, what ruins the HP X27qc’s performance is its slow pixel response time which results in noticeable ghosting. It is most prominent in dark and contrasting scenes or fast-paced sequences in competitive titles. This means that the monitor isn’t suited for E-Sports, but that also depends since not everyone is sensitive to blurring.

The HP X27qc is compatible with both Freesync and G-Sync so you won’t be stuck with one GPU brand if you want to enjoy Adaptive Sync. This is a must-have characteristic now since pricing and availability aren’t stable, so you might have to use what’s on the shelf. Input lag sits at 5ms at 165hz, so there is no need to worry about delays while gaming.

Thoughts on the HP X27qc

The HP X27qc is a decent choice if you want an inexpensive gaming display with lush colors and deep contrast. It is surprisingly good for the price since its also reasonably accurate and built nicely unlike other budget models which felt cheap. 1440p monitor pricing is closing in on what we used to pay for 1080p monitors, and that only means more can enjoy sharper visuals in games and media.

However, the attractively low price for the HP X27qc also comes with a few deal-breakers such as its poor pixel response time. This is expected from VA panels, but other offerings have implemented effective overdrive solutions to get around it. It’s a decent pick but consider its limitations first to avoid the hassle of returning and hunting for another monitor.

Search
NEW
POPULAR
You are here: Home / Reviews / HP X27qc Review – Affordable 165Hz QHD Monitor for Casual Gaming
This website uses cookies to improve your experience. We'll assume you're ok with this, but you can opt-out if you wish.Accept Read More
Privacy & Cookies Policy