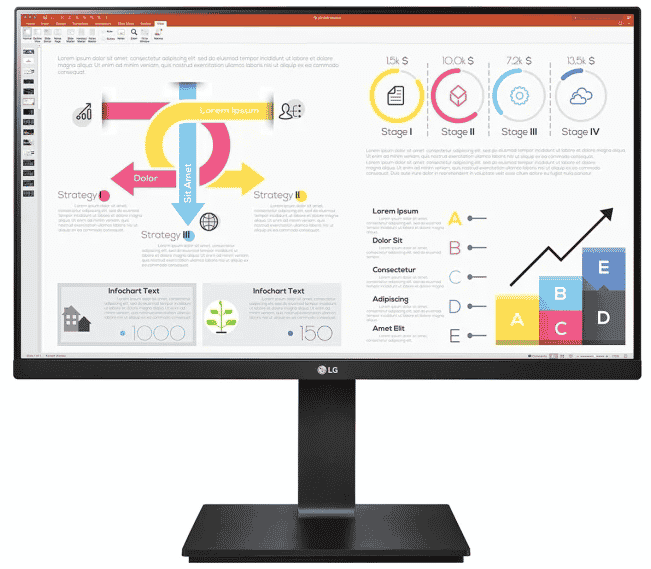 The LG 24QP750-B is an affordable IPS monitor designed for users who want a crisp screen for daily use. This model comes in a smaller 24-inch format which is rather uncommon in today’s display market, so it will cater to a very specific niche of users. Let’s see how the LG 24QP750-B performs to know if it punches above its price point. 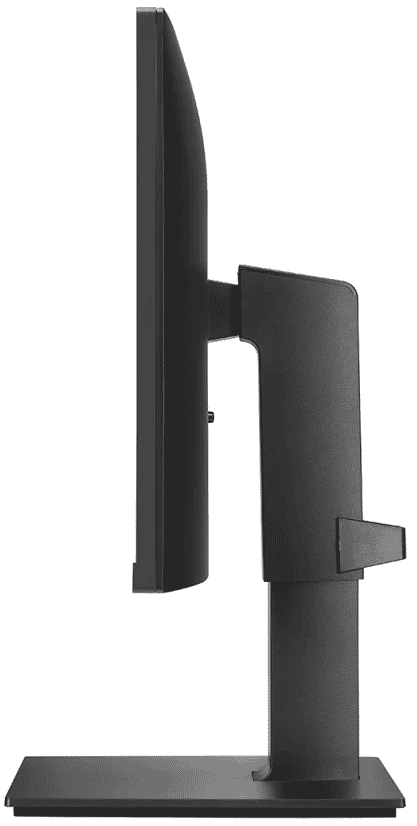 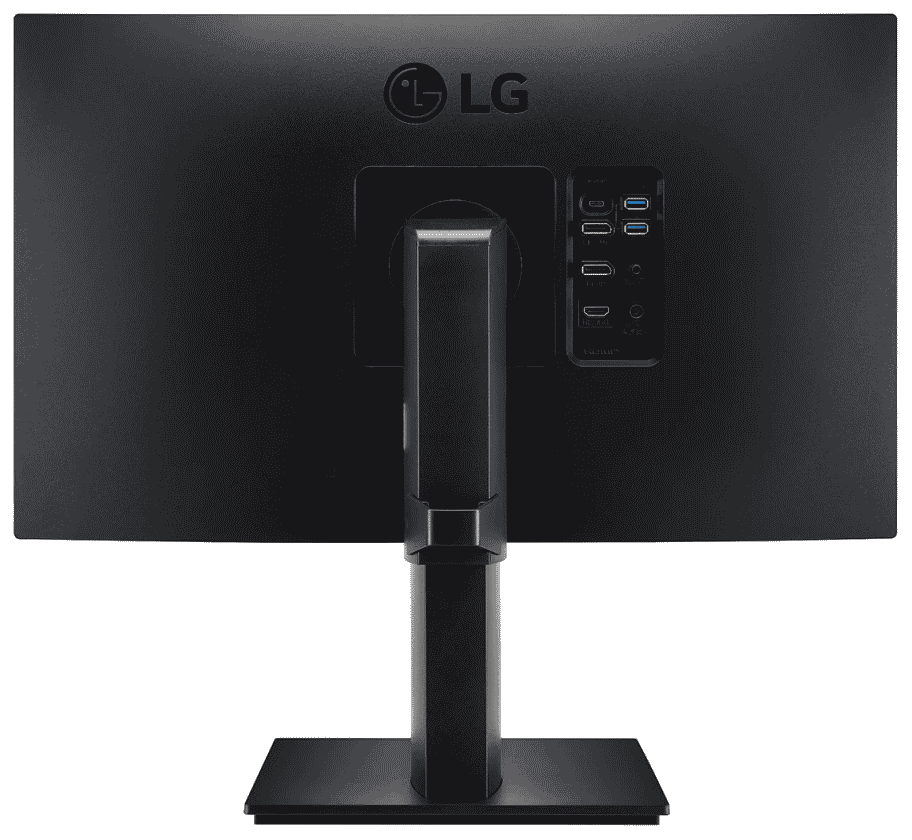 The LG 24QP750-B uses a simple aesthetic that you would mostly see on office monitors so it won’t stand out. The monitor has a matte black aesthetic that doesn’t go out of style and is resistant to dirt and smudges. The screen has a bezel-free design on three sides, but it still has inner borders which become visible when it’s in use.

It’s a 1440p model, but it is only a 24-inch variant so you won’t have to worry much about the space that it will consume. However, its stand has a large base which needs 9.45 inches of depth, but at least it’s flat and can be used as a pedestal for small peripherals. The monitor only weighs in at 12.13 pounds when fully assembled so it’s portable and easy to move around.

Its build quality is also great and comparable with some of the brand’s premium offerings. The monitor uses a lot of plastic, but it is durable and resistant to flexing and cracking. The included stand is firm and stable so the display won’t sag or wobble while you are enjoying your favorite titles.

The LG 24QP750-B also has an OSD joystick just below the LG logo in the middle of its bottom bezel. It’s easy to access and use, so calibrating and switching between its modes will be painless for most users. LG has been implementing this instead of pesky buttons with most of its monitors, and we think that it’s about time its competitors do the same.

The stand included with the LG 24QP750-B offers tilt, swivel, pivot, and height adjustments for your convenience.  It is easy to get a comfortable view or arrange the monitor for a dual or triple setup with it. You can use VESA mounts, but we think it’s only going to be necessary if desk space is limited or if you have multiple setups. 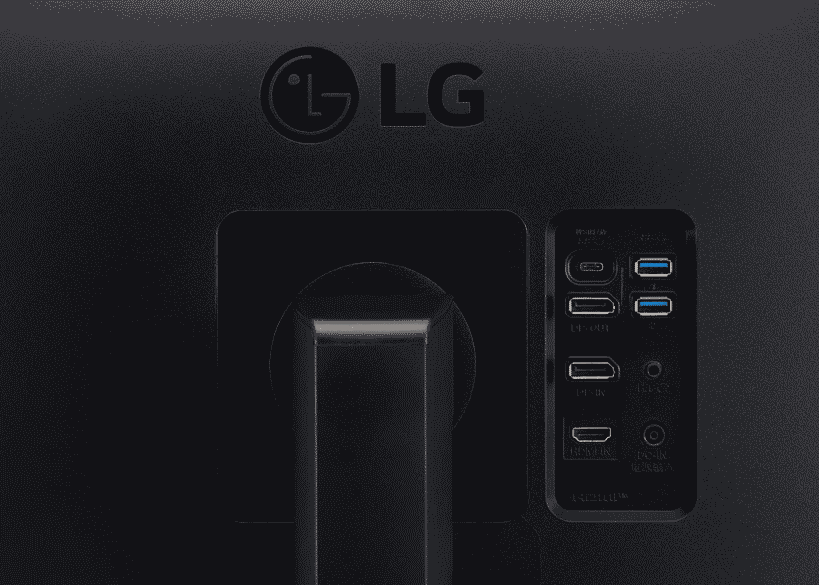 One of the highlights of the 24QP750-B is its connectivity layout which includes DisplayPort 1.4 input and output, HDMI 1.4, and a 65-Watt USB-C slot with DP Alt Mode. You also get two USB 3.0 ports for peripherals and a 3.5mm jack for headphones. Its USB-C connectivity allows you to dock modern laptops like MacBooks, but you can also daisy-chain multiple units since the monitor has a DP Output port.

What’s missing from this model is a pair of built-in speakers which will come in handy for work-from-home setups. That’s fine since it’s already reasonably priced, and most remote workers already have headsets anyway.

The LG 24QP750-B offers a 24-inch IPS panel with a 2560 x 1440 resolution, a 75Hz refresh rate, and a 5ms response time. The backlight has a 300 cd/m2 maximum while the contrast is listed at 1000:1 like most IPS panels. This model was designed for productivity, so it doesn’t have entertainment or gaming-grade features like HDR certification.

The 24-inch 1440p screen is almost as sharp as a 32-inch 4K monitor so it’s great for viewing media or even gaming. Some users might need to use scaling for reading and writing since the letters and numbers become smaller and sharper. You also get more space to work with, but that is still limited in the confines of the 24-inch diagonal.

The LG 24QP750-B renders 99% sRGB and around 81% DCI-P3 which is just right for an office or productivity display. Its default accuracy is decent with a deltaE average of 2.56, so most users won’t feel the need to immediately calibrate it. There are some imbalances in the color, but most won’t notice it right away.

Calibrating it reduced the dE average to an excellent 0.87 which makes it usable for color-critical work. You are going to need a colorimeter to guide you in tweaking the monitor, and those aren’t cheap. We can only recommend getting it if you will use the monitor to earn money by editing or creating media.

The monitor’s backlight reached 361 cd/m2 at 100%, but its contrast was unimpressive at 887:1 with 60% brightness. It can fight off glare in well-lit rooms, but it’s unable to produce deep blacks like VA or OLED panels. The screen can sometimes look washed out when displaying dark images or scenes, but that’s natural for IPS monitors.

Its panel uniformity didn’t have any major issues, although there was a bit of backlight bleeding at the bottom of the screen. It is not noticeable on white backgrounds and full-color images, but dark scenes can reveal some clouding in the affected areas. Note that this varies between every monitor made due to tolerances, so there are better units out there.

The LG 24QP750-B has a 75Hz refresh rate, but it’s not the fastest monitor out there when it comes to pixel response times. It is still prone to some blurring and persistence, so you might want to use a bit of overdrive for fast-paced scenes. We recommend using the Fast setting since it provides the best balance to avoid adding overshoot.

The LG 24QP750-B works with FreeSync and Nvidia’s G-Sync Compatible mode so you can avoid tearing and stuttering while gaming. This is a must-have feature since both GPU brands have capable 1440p cards in the market. Input lag sits at 9ms at 75Hz, so it’s still responsive enough for fast-paced gaming.

The LG 24QP750-Bi s a great choice if you want a compact yet extra sharp screen for all types of use. Its IPS panel is accurate enough for daily use and it has decent performance for casual gaming. You can also utilize the monitor in many ways thanks to its well-equipped connectivity layout which includes a 65-Watt USB-C.

We don’t have any major complaints with the LG 24QP750-B since it performs well and is reasonably priced. However, smaller high-resolution monitors belong to a niche segment so we know it is not an instant best-seller. However, you are getting your money’s worth with this monitor thanks to its flexibility and great performance.

Search
NEW
POPULAR
You are here: Home / Reviews / LG 24QP750-B Review – Compact 1440p IPS Monitor with USB-C
This website uses cookies to improve your experience. We'll assume you're ok with this, but you can opt-out if you wish.Accept Read More
Privacy & Cookies Policy