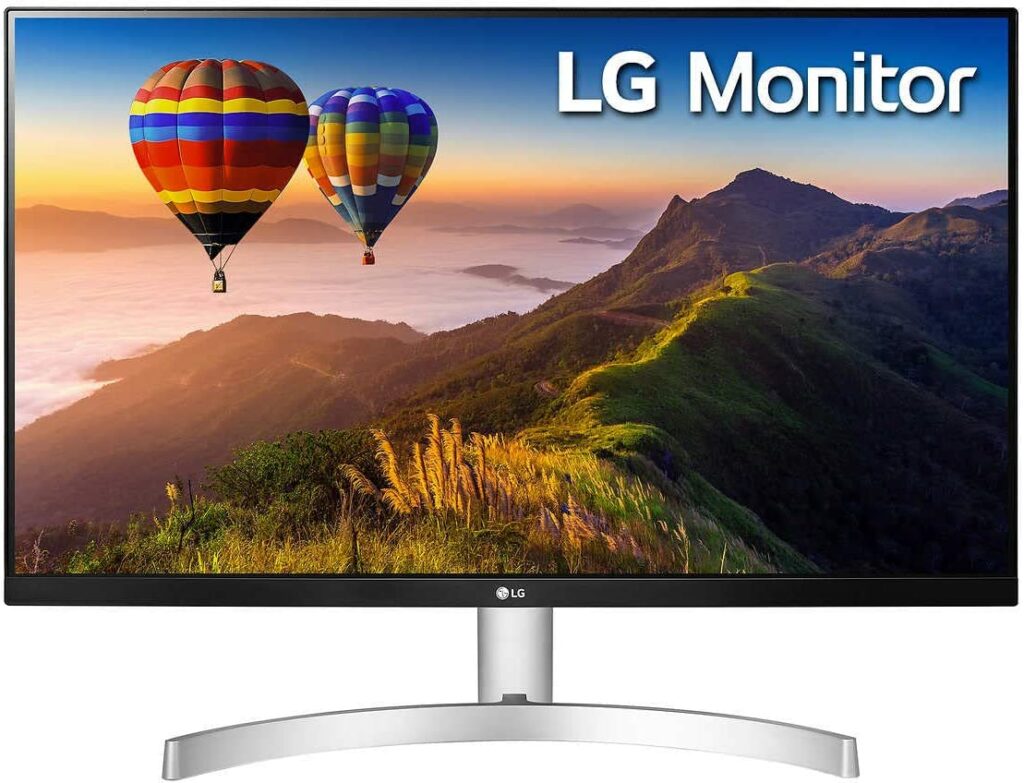 The LG 27MN60T-W is an inexpensive home and office monitor that can be used for multiple purposes such as remote work or even casual gaming. Basic monitors like this don’t have the usual high-end features, but it has a few characteristics like its 75Hz output and FreeSync to make it more interesting. Let’s take a closer look at the LG 27MN60T-W to know how much value per dollar spent it can offer. 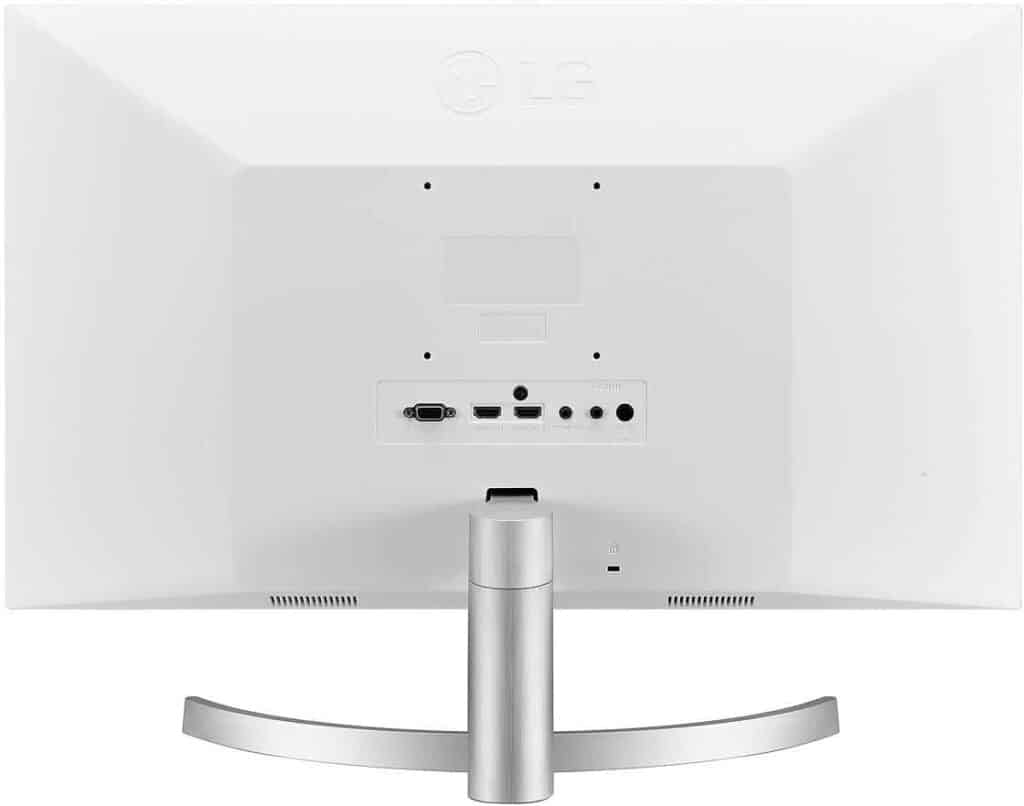 The LG 27MN60T-W sports the brand’s familiar aesthetic for its monitors so it doesn’t look cheap or anything like a budget model. The device has a matte black and white chassis with a silver stand so it looks clean and sophisticated despite its limitations. The display is bezel-free on three sides, but you will still see inner borders when it’s in use.

It is leaner than most monitors, but that’s because of every manufacturer’s initiative to use fewer materials and produce less waste. It only needs 8.2 inches of depth unlike the older models with much larger ArcLine design stands. The device only weighs 9.5 pounds so it is easy to move around or even bring with you if needed.

The first downside of this model is its build quality which felt cheaper and flimsy compared to the brand’s other offerings. Some of the smaller surfaces like the bottom bezel have a bit of unevenness which can become annoying once you’ve seen them. The stand is made of plastic so it is quite wobbly, but it won’t be an issue if you don’t nudge the screen or use a shaky desk.

The LG 27MN60T-W still has the joystick despite its mediocre build quality amidst its budget-oriented nature. It’s located under the brand’s logo so it’s easy to access since it is just in front of you instead of the back of the chassis. You have to live with OSD buttons if you go with budget models, but thankfully, that’s not the case here. 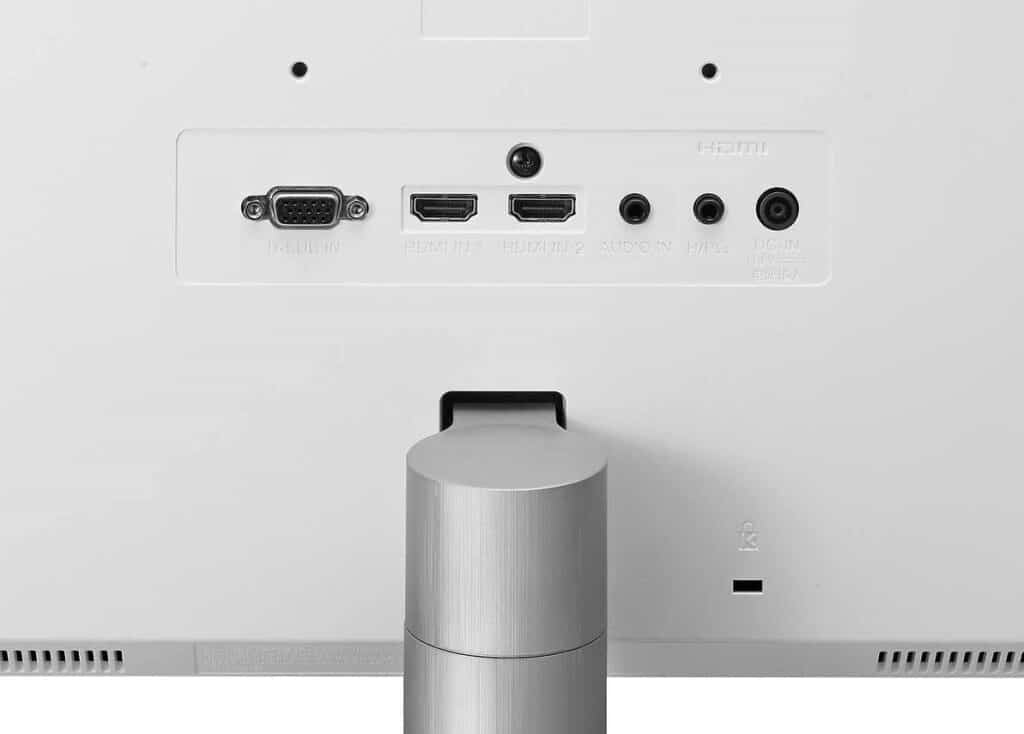 The stand included in the package only offers tilt, so it is severely limited when it comes to getting a comfortable viewing angle. It’s also quite annoying that it is wobbly, considering that the monitor is already very light. You can use VESA mounts with this monitor, but that’s an added expense that will put you in range of something better.

Its connectivity is also downgraded to two HMI 1.4 slots and a 3.5mm jack for headphones. That’s all you will ever need, but it would be nice to have some USB slots at least to make cable management easier. You also don’t get speakers with this variant, but that’s expected since it’s already very affordable.

The LG 27MN60T-W sports a 27-inch IPS panel with a 1920 x 1080 resolution, a 75Hz refresh rate, and a 5ms response time. The backlight has a 250 cd/m2 output while the contrast is listed at 1000:1 like most IPS panels. This model doesn’t have any special features, but at least it supports FreeSync even if others in the same class do not.

Popular opinion suggests that there are better 27-inch options now compared to 1080p variants. The looser pixel density makes it look less crisp and at times pixelated, so users usually want at least 1440p for both gaming and productivity. However, 1080p monitors are still widely used and affordable, plus they are easier to run with most systems.

The LG 27MN60T-W renders 97% sRGB and around 78% DCI-P3 for decent colors in any type of use. It is decently accurate out of the box with a deltaE average of 2.61. It’s not a perfect score, but most users will be hard-pressed to notice the errors.

Calibrating the monitor reduced the deltaE average to 1.05 which makes it suitable for editing work and content creation. However, colorimeters are more expensive than the monitor itself, so it’s not going to be worth it. We recommend going with a better monitor if you want something for professional editing and digital arts.

The LG 27MN60T-W’s backlight reached 251 cd/m2 at 100% so it won’t be able to compete against something like sunlight. Its contrast reached 1056:1 at 50% brightness so the monitor is incapable of deep blacks like most IPS monitors. You might need to look at a VA or OLED alternative if you think grayish dark scenes are not your cup of tea.

Panel uniformity for the sample did not have any issues like backlight bleeding or clouding. The backlight has some deviances from the top to bottom edge, but it is only noticeable when an all-black image is displayed. Note that this can change between every monitor made since there are tolerances, so it is possible to get a better unit if you are luckier than us.

The LG 27MN60T-W doesn’t have a gaming-grade pixel response time, although that’s understandable since it wasn’t designed for that. The 75Hz refresh rate didn’t help in reducing motion blur, so you will need to combine it with the overdrive. We recommend using the Fast setting since it doesn’t add a lot of noticeable overshoot.

The LG 27MN60T-W is compatible with FreeSync and G-Sync if you force it via the Nvidia Control Panel app. Both GPU brands have competitive GPUs, so it doesn’t make sense to buy an exclusive monitor since you will upgrade at some point. Input sits at 9ms at 75Hz so it is still snappy and responsive enough for any type of use.

The LG 27MN60T-W is a decent daily driver for office use or entertainment purposes thanks to its decent panel and affordable price.  It’s not the most feature-packed, but it has a few things up its sleeve like its presets and Adaptive Sync which make it a good choice. It is also slim and lightweight so it will make a good secondary display.

However, that low price also introduced some deal breakers which you won’t commonly see on LG’s products. Its build quality could use some improvement plus some upgrades to its stand and connectivity options. That’s a lot to ask from a cheap monitor, but we’d love it even more if LG offered more value for the consumer.

Search
You are here: Home / Reviews / LG 27MN60T-W Review – Affordable 27-Inch IPS Monitor for Daily Use
This website uses cookies to improve your experience. We'll assume you're ok with this, but you can opt-out if you wish.Accept Read More
Privacy & Cookies Policy