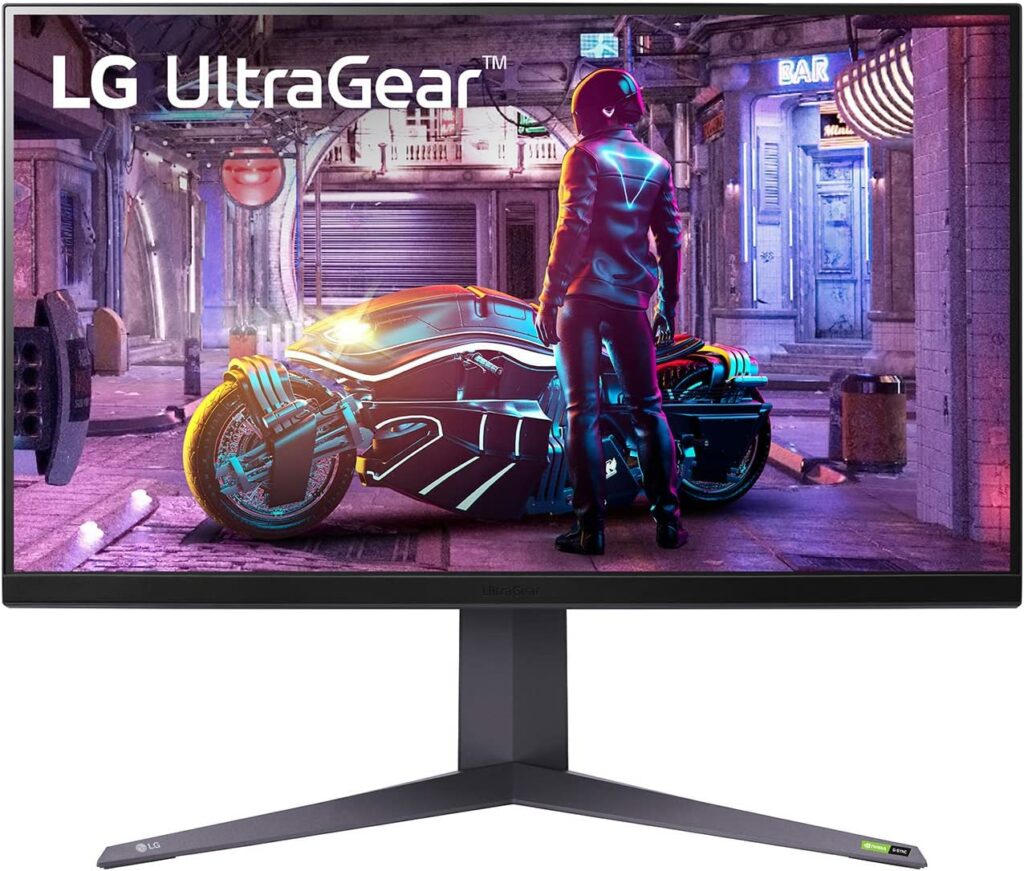 The LG 32GQ850-B incorporates new technologies to stun the most meticulous gamers with superb image quality and speed. It also has a redesigned UltraGear aesthetic which makes it look cleaner and more attractive to minimalists. Let’s take a closer look at the LG 32GQ850-B to see if it’s a worthy upgrade for your competitive gaming setup. 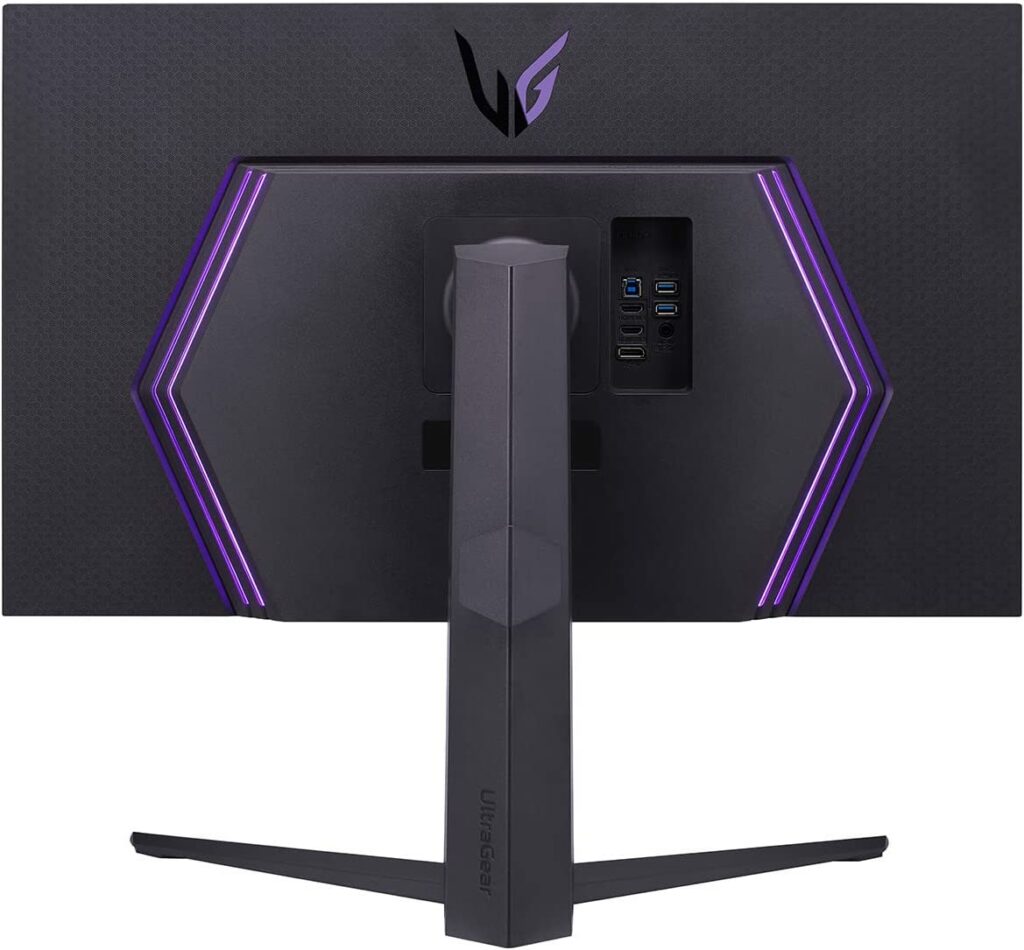 The LG 32GQ850-B has a more mature aesthetic this time versus previous UltraGear models like the 32GP850-B. It has a matte black aesthetic without the red streaks, but it still has the distinct RGB lighting at the back of the chassis. It has a virtually bezel-free design so it looks cleaner and more modern, but you will still see minimal inner borders if you look close enough.

This is a 32-inch model, so its obviously larger than most displays that you will see in school or at the office. You have to scope out your desk space for it since it can offset your other peripherals such as bookshelf speakers or even a full-sized keyboard. We like that it isn’t too heavy so you can definitely bring it with you to LAN parties.

It may have seen some downsizing, but its build quality is still very good for a monitor that’s mostly made of plastic. We didn’t see any cosmetic defects and the seams met each other perfectly without any gaps. The included stand is firm and stable so the large screen won’t wobble or sag while you are in the middle of an intense gaming session.

The LG 32GQ850-B still has an OSD button under the LG logo on its bottom bezel. It’s easy to access and use, unlike buttons which are confusing and time-consuming. It doesn’t have a remote, but you can use LG’s OnScreen Control feature to adjust or activate a few things directly with your mouse and keyboard.

The stand included with the LG 32GQ850-B tilt, pivot, and height adjustments for your convenience. You can’t angle the screen from left to right, but that’s okay since its meant to be the center of your attention while gaming. You can use VESA mounts, but it only becomes necessary if you have multiple screens or if desk space is limited. 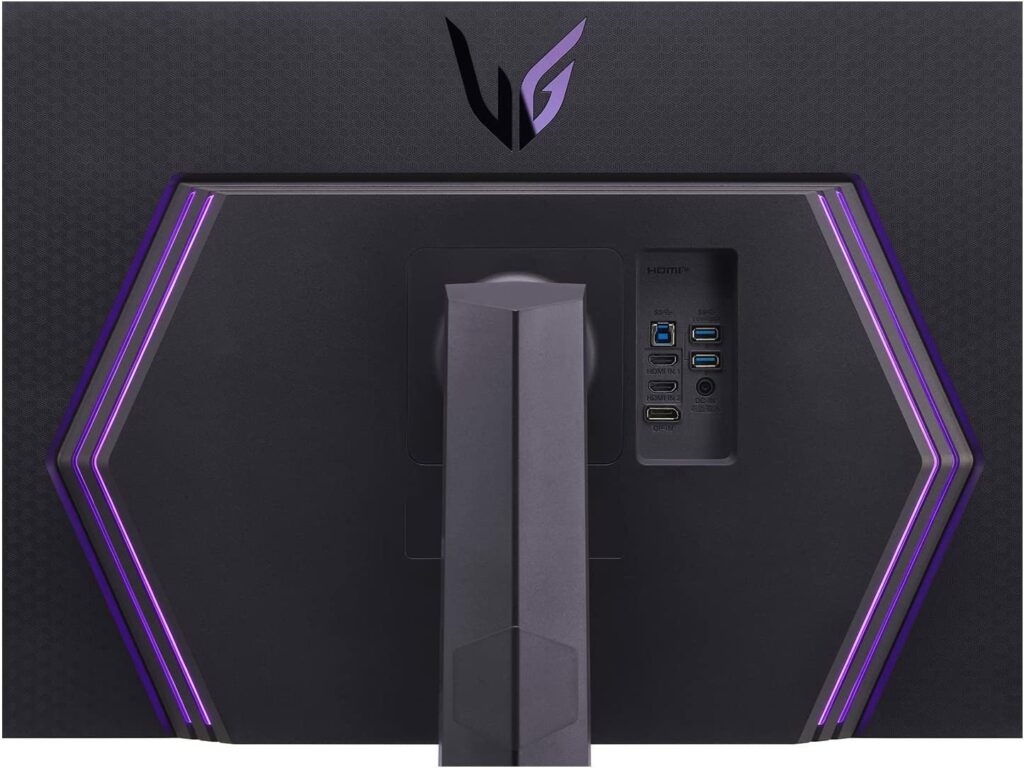 Its connectivity layout is comparable to what you will see on its premium or prosumer siblings in the brand’s current lineup. It has DisplayPort 1.4 and two HDMI 2.0 slots, plus a USB-C port that supports DP Alt Mode. The bad news is that it doesn’t have charging capabilities, so you can’t dock your USB-C laptops to charge it while its transmitting video signals to the screen.

You also get two USB 3.0 ports and a third one for data upstream, along with a 3.5mm jack for headphones. This model doesn’t have speakers since it was designed to be used with a headset that’s tuned for its intended purpose. However, we feel that LG could have added more USB slots or a decent built-in pair since its not a particularly practical or affordable monitor.

The LG 32GQ850-B boasts a 32-inch Nano IPS panel with a 2560 x 1440 resolution, a 260Hz overclocked refresh rate, and a 1ms response time. The backlight has a 450 cd/m2 brightness while the contrast is listed at 1000:1. This model is HDR 600-certified, plus it has an Advanced True Wide polarizer which absorbs unnecessary spectrums of light to enhance the output’s accuracy.

The pixel density of this monitor is almost comparable to what a 24-inch 1080p screen has so its not a massive upgrade in sharpness. However, you have to remember that it has a higher pixel count, so it will still come out on top in clarity. Games and images will still look better, plus it gives you more room to maneuver to finish tasks quicker.

The LG 32GQ850-B renders 100% sRGB and 94% DCI-P3 for vibrant color in games and any type of media. However, its default accuracy can’t be consider for prosumer use since the deltaE average is quite high at 3.14. Most users won’t have an issue with it, but those who are into color-critical work will know the difference.

Calibrating it reduced the deltaE average to an excellent 0.51 which is better than what some editing monitors can offer. However, you will need a colorimeter to achieve this kind of setting, and those aren’t cheap. Its only practical to buy them if you are going to use the monitor for work or business.

The screen’s brightness only reached 399 cd/m2 at 100%, but it peaked up to 602 cd/m2 when its HDR mode is active. Its contrast isn’t as good since it only reached 922:1 at 50% brightness with a bit of extension when the limited local dimming zones worked. However, it failed to produce an appreciable HDR effect even if it has the latter.

Panel uniformity for the test sample did not fare too great as well since there were some irregularities on the sides of the display. They showed up as clouding in dark scenes, but they are less noticeable when the screen is displaying full-color images. Note that this can vary between every monitor made due to tolerances, so its possible to get a better unit if you’re lucky.

The LG 32GQ850-B’s pixel response time is excellent due to its very high and overclockable refresh rate and Fast IPS technology. It barely shows any blurring, but we still recommend leaving its overdrive ta the Fast setting to avoid issues. Using the maximum level adds some very minor overshoot, so we think its still usable.

The LG 32GQ850-B is a fantastic monitor when it comes to design and pure gaming performance. It’s well-designed and it has a mature and preferable aesthetic now, so it is going to be an upgrade many will love. Its Nano IPS panel is very vibrant but it needs better tuning from the factory since this is a premium model.

Our main complaint with the LG 32GQ850-B is its high price which can get you a 4K 144Hz with comparable performance. Its also not as accurate as advertised unlike many of its previous offerings which had lower deltaE scores. It’s a great monitor, but we can only recommend it for professional use if you have access to a colorimeter.

Search
You are here: Home / Reviews / LG 32GQ850-B Review – 1440p 260Hz Nano IPS Gaming Monitor with ATW Polarizer – Recommended
This website uses cookies to improve your experience. We'll assume you're ok with this, but you can opt-out if you wish.Accept Read More
Privacy & Cookies Policy