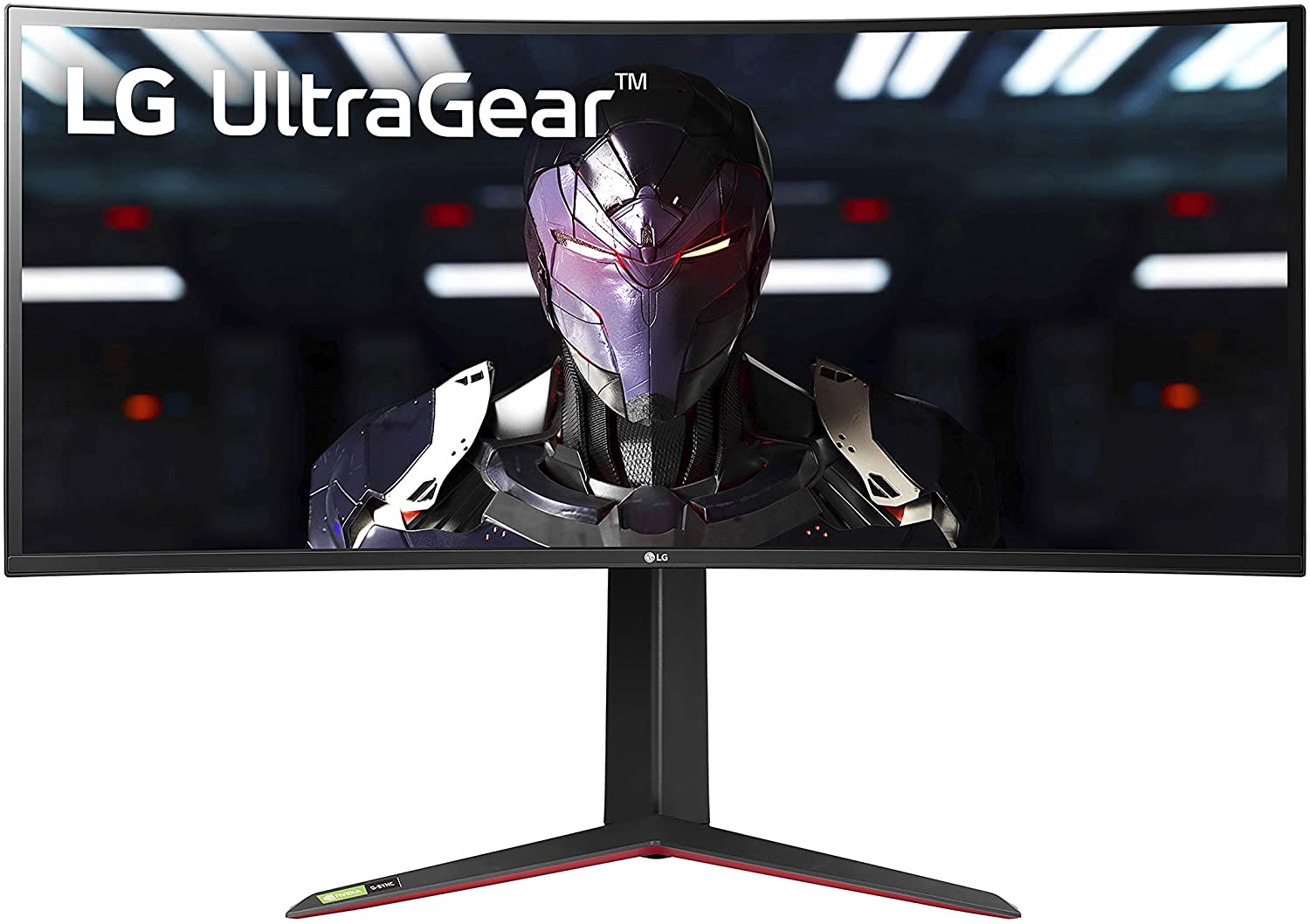 The LG 34GP83A-B is a more affordable alternative to the superb LG 34GN850 that satisfies the requirement for a fast ultrawide monitor for gaming. Both monitors have nearly identical specs, so we’re curious what change this new model brings with its $200 or so price difference. The LG 34GP83A becomes more enticing since it’s more affordable, but let’s find out first if that price cut brings some performance penalties as well. 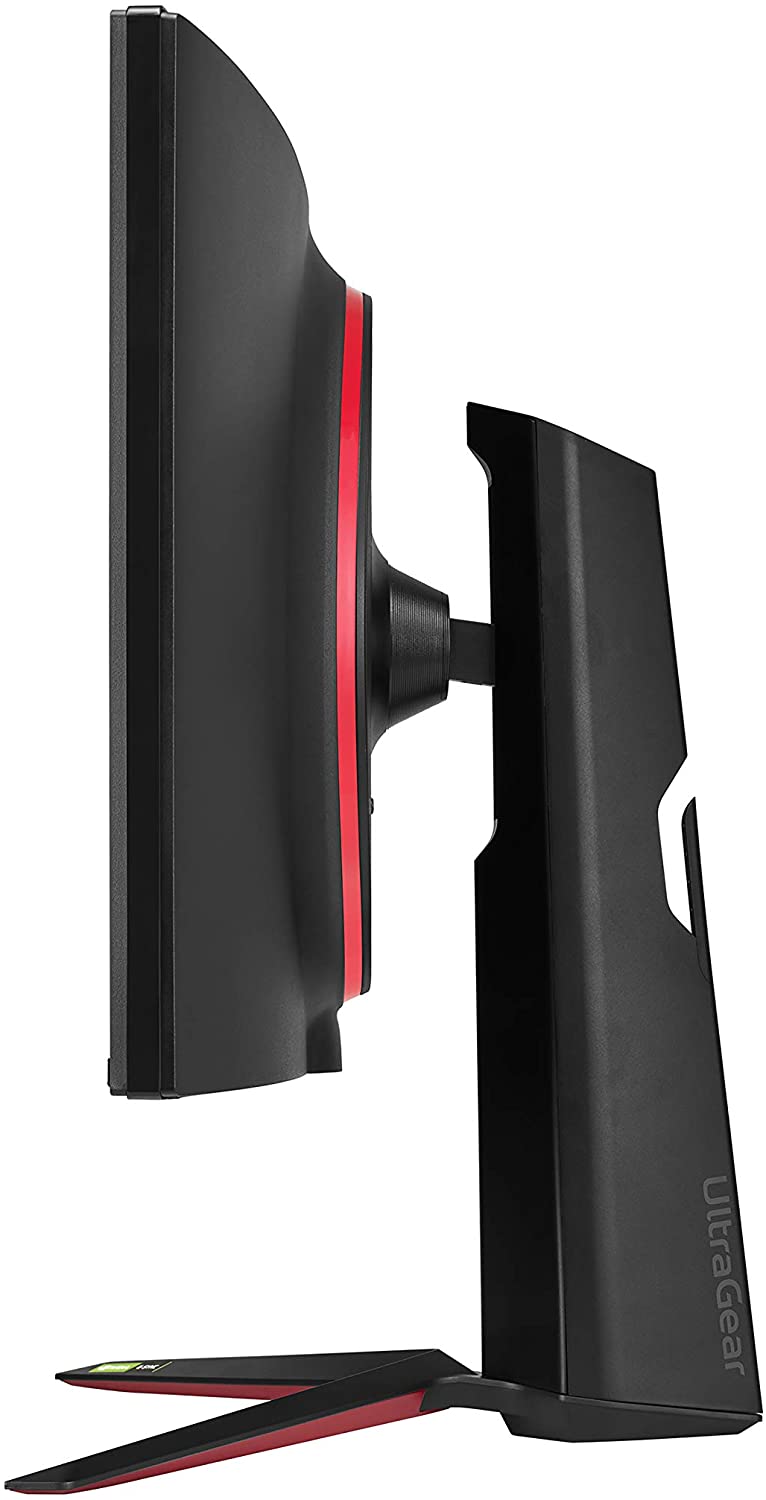 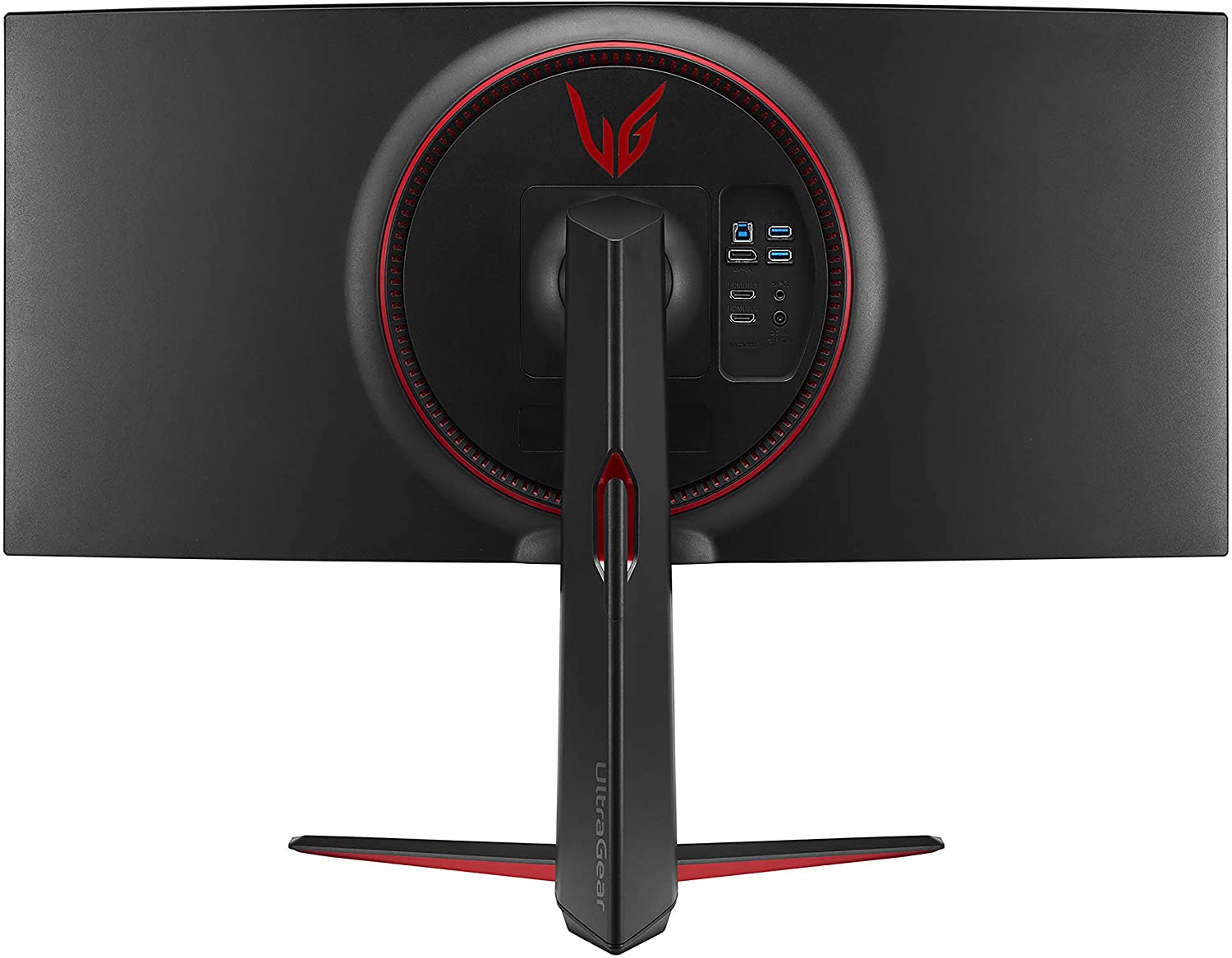 The LG 34GP83A-B sports the same aesthetic as most of the UltraGear monitors that combine sleekness with a bit of gamer-centric vibes. The monitor has a matte black finish with streaks of red in some discrete spots so it doesn’t look too tacky like some of its competitors. The display is bezel-free on three sides, so you won’t get distracting while enjoying the extra-wide view provided by the monitor.

The LG 34GP83A-B is mostly made of plastic, so its heft is reasonable for a 34-inch ultrawide gaming monitor. You might need to check your desktop setup for these monitors, especially if you have speakers. It needs almost three feet of width and more than a foot of depth so it is bulkier than most options in the market.

However, don’t let its material choice fool you since it feels quite durable and nothing like some budget models we’ve handled. There are no cosmetic defects on the device and its stand doesn’t wobble unwantedly while gaming.

The LG 34GP83A-B’s OSD can be accessed using the joystick under the bottom bezel or right in your desktop via LG’s OnScreen Control feature. The latter lets you tweak the monitor’s features using your mouse and keyboard so you don’t have to go through the fuss of pesky buttons. Either of the two makes adjusting common settings in the heat of battle quicker and easier, and we wish manufacturers would follow this implementation with their respective monitors.

The stand included with the LG 34GP83A-B doesn’t have any handicaps in ergonomics since it still offers tilt, swivel, and height adjustments. You can also swap it out with a VESA mount if you want to save space or if you have a multiple display array with your setup. Our only complaint about it is its size, but that’s a fair trade-off for reliability and stability in a premium monitor. 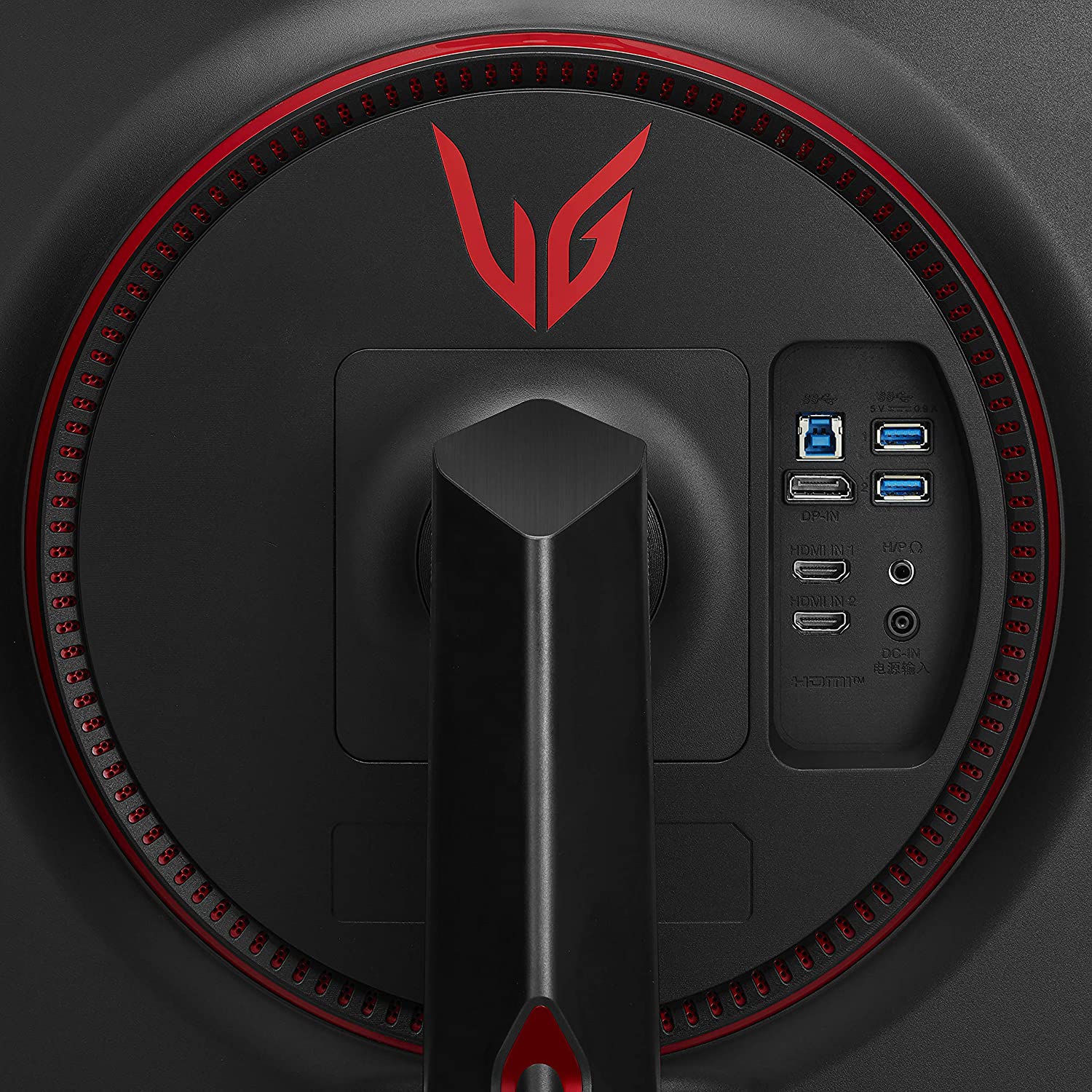 The layout on the LG 34GP83A-B offers DisplayPort 1.4 and two HDMI 2.0 slots, along with a trio of USB 3.0 connectors for accessories. That’s enough for a full gaming build with two next-gen consoles, but sadly, the PS5 and Xbox Series X do not support resolutions that go beyond the 16:9 aspect ratio. You also get a 3.5mm jack for headphones, but it’s mostly pointless since gamers will prefer the motherboard which has a soundcard, or use USB devices anyway.

The LG 34GP83A-B doesn’t have speakers since most gamers prefer headsets for better immersion anyway. However, that’s a missed opportunity for us since a decently powered pair can easily be the difference to the right buyer. Some would rather avoid the discomforts of heavy cans while gaming or sitting back and relaxing while watching movies and streams.

The LG 34GP83A-B sports a 34-inch Nano IPS panel with a 3440 x 1440 resolution, a 160Hz refresh rate, and a 1ms boosted response time. The backlight is rated at 350 cd/m2, while the contrast ratio is specified at 1000:1, unlike the other Nano IPS models. This model is also compliant with VESA’s DisplayHDR 400 standard just like the LG 34GN850 which has identical numbers in its spec sheet.

34-inch Ultrawide screens aren’t the sharpest, but they are great for productivity and immersive gaming. You get more horizontal space and just the right amount of pixel density to make games and movies look detailed and crisp. Take note that you are going to need a meaty GPU to meet the 160Hz refresh rate, especially on modern titles.

The LG 34GP83A-B’ covers a little over 100% sRGB and around 80% DCI-P3 which is slightly lower than the 34GN850. However, default accuracy is better since the deltaE average is only at 2.21 versus the 2.76 we got from the latter. The monitor is good to go with only a few minor tweaks so plug and play gamers will be better off with this model.

Users with colorimeters can get better results since the dE average can be lowered to around 0.98. that score is better than the more expensive variant, but do take note that these averages can vary between every unit. This also tells us that the two most likely use the same panels but are factory-tuned differently.

The main weakness of the LG 34GP83A-B’s imaging properties is its contrast ratio which is limited to 967:1 at 60% brightness. The backlight can reach 390 cd/m2 in SDR and around 455 cd/m2 when HDR is active, but it does little to help with the screen’s black luminance. It can still look grayish when used in the dark like most IPS panels, but only those equipped with FALD units or VA modules are better in this regard.

Response times for the LG 34GP83A-B are excellent overall when you are playing at its maximum 160Hz refresh rate. There is no need to use its Overdrive feature beyond its Normal setting since it is practically blur-free. Be wary of setting the latter too high since it will induce unnecessary overshoot with no noticeable improvement to the monitor’s already excellent motion handling.

The LG 34GP83A-B is compatible with both FreeSync and G-Sync for both AMD and Nvidia GPUs. It is always nice to have the freedom to choose between the two brands since both are pumping out strong contenders in the high-end GPU market. Input lag sits at 4ms at the maximum refresh rate, so there is no need to worry about delays while gaming.

The LG 34GP83A-B is a better choice if you consider its lower price than the 34GN850 and the very minor differences between their capabilities. The variances in imaging performance are mostly negligible, and most won’t be able to tell them apart when they are compared side by side. You lack a few extras such as HDMI cables, but most users won’t mind since almost every device you can hook up to this monitor already has one included in its package.

However, the LG 34GP83A-B isn’t merely competing with its more expensive predecessor in today’s market. We now have $500 or less ultrawides like the Gigabyte G34WQC which has a VA but can match its performance more or less with more contrast to boot. It’s a great buy, but it’s far from being the most practical ultrawide gaming monitor that you can get right now.