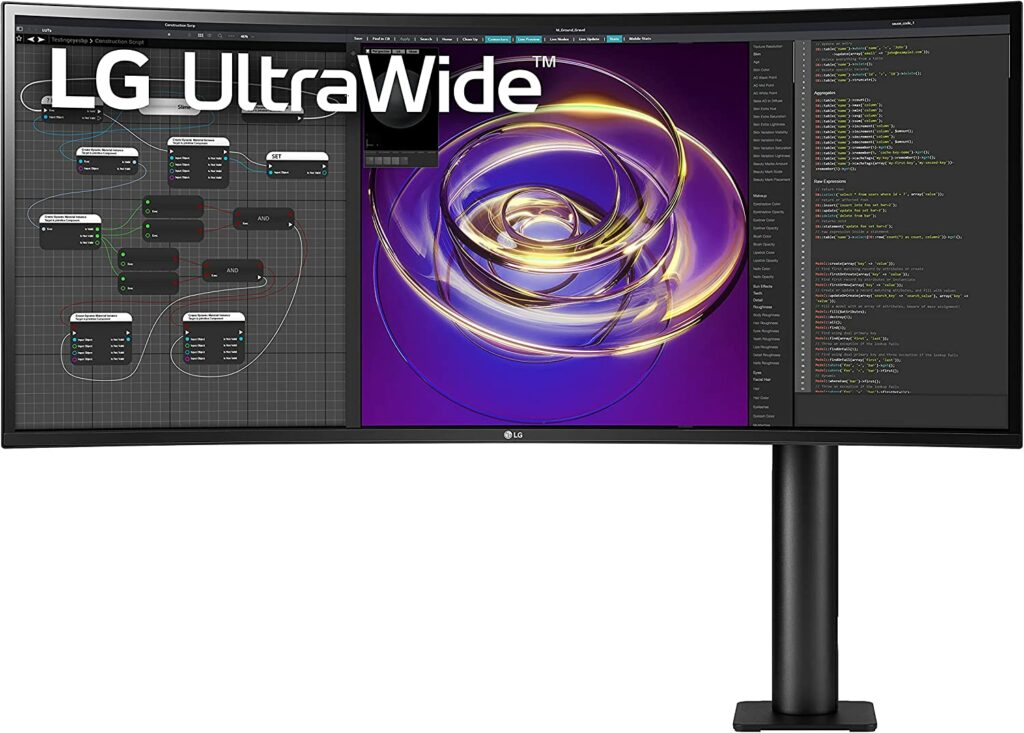 The LG Ergo 34WP88C-B is a sophisticated IPS ultrawide monitor that’s designed for comfort and to enhance your productivity and efficiency. What makes it special is its ergonomic stand which replaces the usual combination with something that saves space while being more flexible. It is quite pricey unlike the common VA-based ultrawides we now have, but we think that it’s worth a deeper look to see if it’s a good investment. 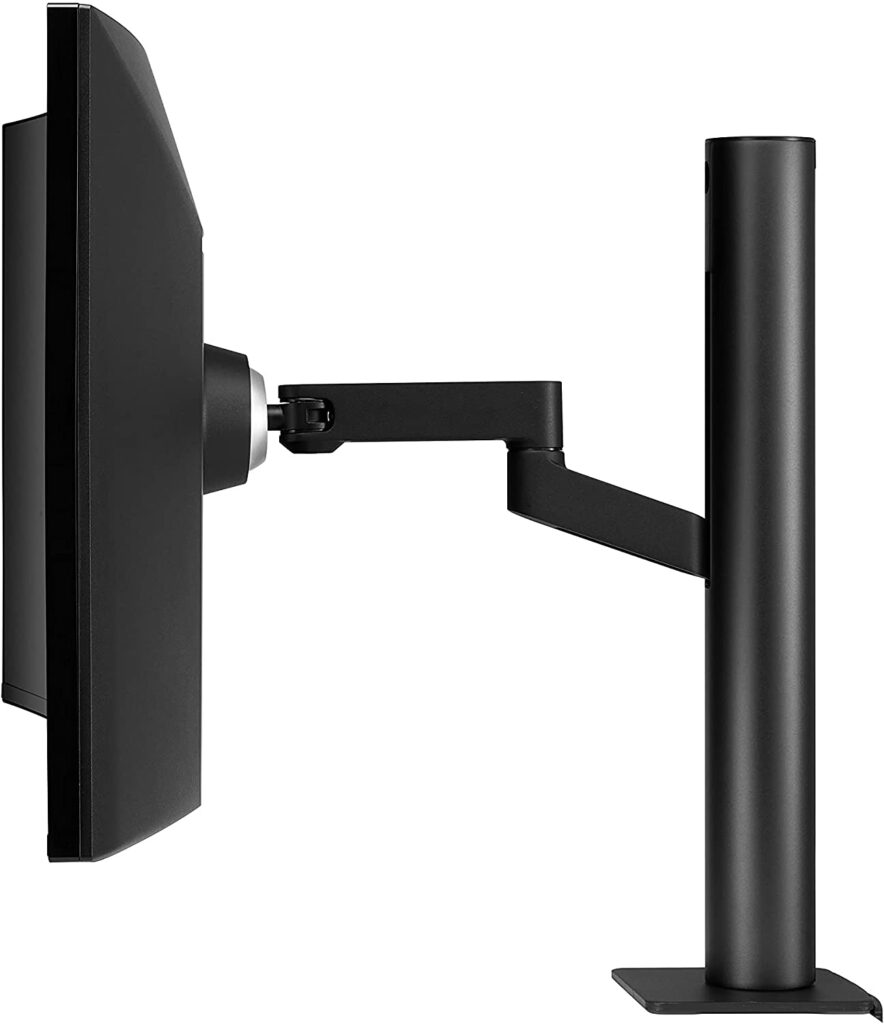 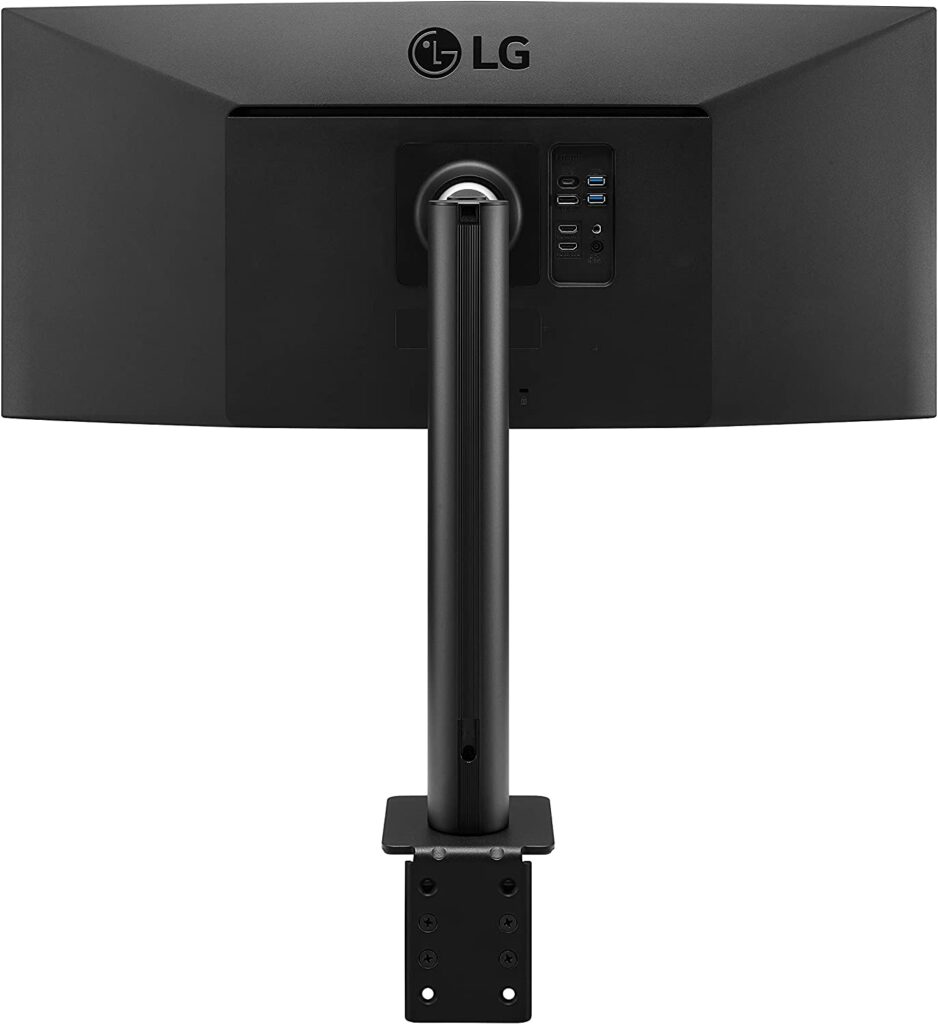 The LG Ergo 34WP88C-B looks like most office monitors if it weren’t for its ergo stand which shapes it differently. It has a matte black chassis with clean lines, unlike the brand’s UltraGear variants that have streaks of red in some spots. The display is bezel-free on three sides, but you will still see inner borders when it’s in use.

It’s a big monitor, but its dimensions become even more massive if you fully stretch its ergonomic stand. It can be as tall as two feet and it can eat up over 17 inches of depth when it’s fully extended towards you. It is also heavy at 23.8 pounds, but it doesn’t consume all that space from your desk since the stand only needs the edge.

Its build quality is also great thanks to its durable plastics and the reliable yet more flexible stand. We didn’t notice any cosmetic defects like sharp edges or uneven seams, plus it didn’t seem like the chassis would crack or flex out of proportion just like that. It’s also quite stable even if it basically doesn’t have a large base, but you must clamp it perfectly on a strong and suited desk surface.

The LG Ergo 34WP88C-B, like all LG monitors, has an OSD joystick under the bottom bezel and the center logo. It’s within reach and very easy to use so users won’t struggle with adjusting some settings or selecting some features. You can also use LG’s OnScreen Control app for this monitor directly from your OS.

The stand included with the package looks more like a VESA mount rather than a regular unit that comes with a base and an upright. It clamps to the edge of your desk so it doesn’t consume too much space, but you need to make sure that it’s thick and strong enough. You can still use a conventional VESA arm if needed, but it is only necessary if you have multiple screens.

Its connectivity layout is its main highlight over the LG 34WN780-B which is one of its predecessors. This model includes DisplayPort 1.4 and two HDMI 2.0 slots, along with a 96-watt USB-C port with DP Alt Mode for modern laptops like MacBook Pros. You also get 2 USB 3.0 ports and a 3.5mm jack for peripherals and accessories.

The LG Ergo 34WP88C-B also has a pair of 7-watt MaxxAudio speakers like many of the brand’s premium ultrawides. They sound considerably louder and better than most built-ins so they can be used for movies and casual gaming. However, we’d still treat them as secondaries for applications where audio quality and definition truly matter.

The LG Ergo 34WP88C-B boasts a 32-inch Ultrawide IPS panel with a 3440 x 1440 resolution, 60Hz refresh rate, and a 5ms response time. The backlight has a 300 cd/m2 maximum while the contrast ratio is listed at 1000:1 like most IPS panels. This model doesn’t advertise HDR certification, but it mentions wide color gamut and HDR10 compatibility.

1440p ultrawides are still popular even if we have super ultrawides and 4K or 5K screens. They aren’t as expensive, plus they offer just the right kind of sharpness and extra room that will enhance your visual experience and productivity. This model was built for that, so it’s a no-brainer even if the Ergo series also has 16:9 models.

The LG Ergo 34WP88C-B produced more than 100% sRGB and around 93% DCI-P3 for rich colors in any type of media. Its default accuracy had a deltaE average of only 1.98, so it looks like it went through some basic calibration from the factory. Most users won’t need to push this further since it’s already balanced out of the box, although it still has room for improvement.

Using a colorimeter improved that dE average to an impressive 0.89 which makes the monitor suitable for color-critical work. The downside is that you need a colorimeter to get that kind of improvement since copying settings cannot guarantee it. Every panel made will be slightly different, so calibrated results will vary as well.

The LG Ergo 34WP88C-B’s backlight peaked at 295 cd/m2 which slightly missed its rating, but still is plenty for daily use. Its contrast issue is the bigger issue since its limited to 920:1 at 70% brightness. The monitor may be vibrant thanks to its wide gamut, but it is not capable of deep blacks or compelling dark scenes like VA and OLED types.

Its panel uniformity also had issues due to backlight bleeding on most of its edges. They show up as clouding in dark scenes, and can even become visible when full-color images are on display. Note that this isn’t permanent since there are variances and tolerances in play, so you can still get a unit with a better panel.

Its response time is quite good for a 60Hz monitor, unlike the older IPS models that we had three to five years ago. However, you still need to use some overdrive to help with the persistence since it still is prone to blurring in some cases. We recommend using the Faster level since it cleans up the screen better without adding too much overshoot.

The LG Ergo 34WP88C-B is FreeSync and G-Sync compatible, so your games don’t skip a beat at this resolution. We know it is not a priority since this is a business monitor, but it’s always nice to have a solution for tearing and stuttering. Input lag sits at 9ms at 60Hz so it’s still snappy and responsive even if it’s limited to 60Hz.

The LG Ergo 34WP88C-B is a great choice if you want a monitor that’s designed for modern business or work-from-home setups. Its unique ergonomic system saves plenty of space while guaranteeing your comfort and convenience during those long and tedious workdays. Its IPS panel lacks in the contrast department, but it’s vibrant and accurate, especially when it’s calibrated.

However, this monitor is quite expensive and higher-priced than its predecessor, so some users might not be thrilled. Gamers can go for a cheaper 144Hz ultrawide and a VESA mount to get the same result. It’s a superb option, but you must be able to utilize its special features to make the purchase worthwhile.

Search
NEW
POPULAR
You are here: Home / Reviews / LG Ergo 34WP88C-B Review – 34-Inch Ultrawide Ergo Monitor for Productivity and Business
This website uses cookies to improve your experience. We'll assume you're ok with this, but you can opt-out if you wish.Accept Read More
Privacy & Cookies Policy