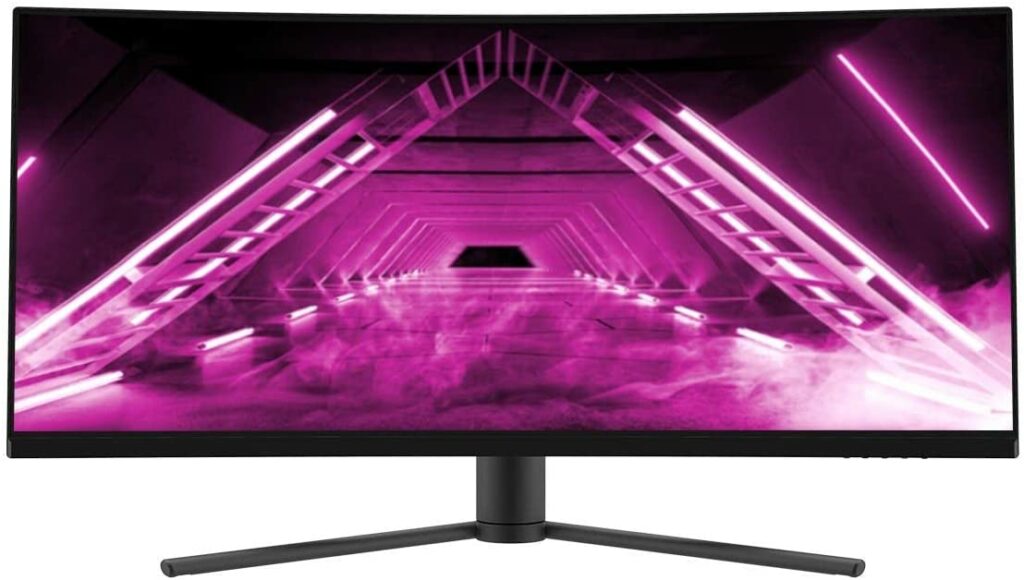 The Monoprice Dark Matter 42772 includes a fast ultrawide VA panel that’s perfect for immersive gaming and productivity on the side. It doesn’t have fancy specs like the Alienware AW3423DW, but what’s most attractive about it is its low price point. Let’s check out what the Monoprice Dark Matter 42772 has to offer against the widely available $500 ultrawide monitors such as the Gigabyte G34WQC. 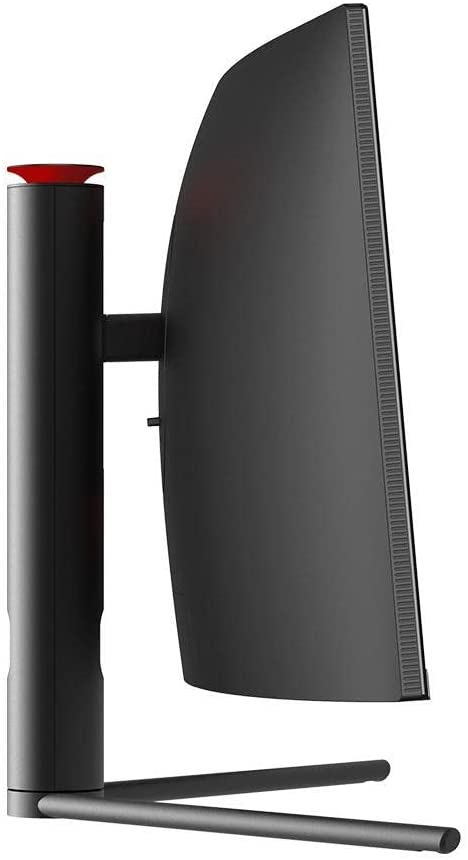 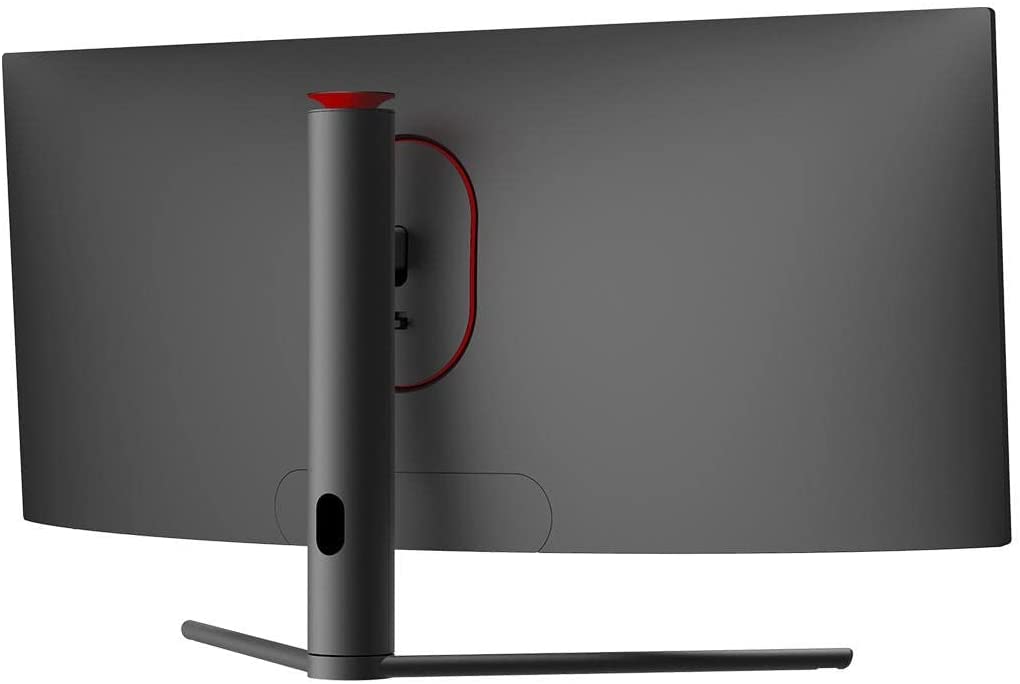 The Monoprice Dark Matter 42772 sports a simple aesthetic that prioritizes function over form. The monitor has a matte black finish all over, so it won’t clash with themed builds or go out of fashion after a few years. The display isn’t entirely bezel-free, but the top and side edges of the screen have thinner borders for that clean look.

The monitor has a red LED ring at the back that adds a gentle glow to your setup at night. The downside is its color cant be changed, so those who use other colors for their lighting will probably just turn it off. You can control it via the OSD since it isn’t

The device is noticeably slimmer than its closest competitors, but it is still a massive monitor by today’s standards. The monitor needs almost three feet of width from your desk, so it might cover your desktop speakers if you have a set. It doesn’t take up a lot of depth and it only weighs a little over 15 pounds so it is easy to lift and move around.

The monitor feels plasticky and too light, but it is decently durable to prevent flexing or cracking when moderate force is applied. We didn’t see any cosmetic defects thanks to the brand’s vast improvements in its quality control at the factory. The stand can keep the screen upright, but it wobbles if you hit the edges of the cabinet accidentally.

The Monoprice Dark Matter 42772 has OSD buttons at the bottom right of the chassis for easy access. However, it can still get confusing since it takes multiple key presses to get to a specific submenu or setting in the OSD. Similarly priced alternatives already have joysticks so this minor oversight isn’t easily forgivable at this point.

The stand included offers tilt, swivel, and height adjustments for your comfort and convenience. Pivoting is unnecessary since this is an ultrawide monitor, so you can only do that if you use a VESA mount instead of the default stand. However, spending the extra on that will only be necessary and practical if your desk space is limited or if there are multiple displays on deck.

The Monoprice Dark Matter 42772 doesn’t have extras like USB ports, but it has plenty of video inputs so you can maximize it for a multitude of devices. It has two slots each for DisplayPort 1.4 and HDMI 2.0 which lets you use it for four host devices at once. That’s plenty in most cases, although users are starting to prefer options with USB ports for easier cable management.

However, you won’t find speakers with the Dark Matter 42772 since it’s a budget model. That’s okay if the price is lower than most, but it is always nice to have an extra set for basic tasks. It is also a fact that gamers will prefer headphones since they go well with this monitor and its immersive properties.

The Dark Matter 42772 boasts a 34-inch curved VA panel with a 3440 x 1440 resolution, a 165Hz refresh rate, and a 1ms MPRT response time. The backlight has a 400 cd/m2 output while its contrast ratio is listed at 3000:1 like most VA panels. The monitor isn’t certified for VESA’s HDR standards even if qualifies for the minimum, but that’s okay since HDR 400 doesn’t offer significant performance anyway.

QHD ultrawides like this model aren’t as sharp as their 27-inch 16:9 counterparts, but you still get an upgrade in sharpness and a considerable increase in screen space. It works great for games with immersive field-of-views plus it’s also great for productivity since you get more space to work with. This model supports Picture by Picture and Picture in Picture display modes to help you take advantage of its wide panel.

The Monoprice Dark Matter 42772 rendered more than 100% sRGB and around 98% DCI-P3 for stunning vibrancy in games and movies. The downside is it isn’t accurate out of the box with its deltaE average of 3.88 so it is less ideal for professional use in editing or content creation. This is common with wide gamut monitors especially those that aren’t marketed for creator use.

Calibrating the Monoprice Dark Matter 42772 reduced its dE average to a more palatable 2.43, but it is still not within the ideal limits. Using a colorimeter on the monitor isn’t recommended, so we recommend manual tweaking to get a preferred setting. We also can’t recommend it for editing work unlike some of the brand’s better-performing offerings.

Its backlight maxed out at 385 cd/m2 which is plenty even for rooms with lots of sunlight coming in. Its contrast peaked at a mighty 4661:1 at 60% brightness, enabling it to produce deep blacks and fantastic grayscale performance. Games and movies with dark scenes look compelling on this monitor, although you have to set the backlight a bit higher to prevent black crush.

The sample’s panel uniformity could use some improvements since there were backlight leaks at the top and bottom edges of the screen. They created clouding and uneven black or dark backgrounds which were detrimental to its immersive properties. Note that this can change with every monitor made since there are tolerances to consider, so it is entirely possible to get a better unit if you are lucky.

Another weakness we saw on the Monoprice Dark Matter 42772 is its slower pixel response time. It’s prone to blurring and persistence in fast-paced and contrasting transitions, but that’s common with most VA panels. Its 165Hz overclock is also unusable if you want to use overdrive, so we recommend going with 144Hz and maximum boost for better performance.

The Monoprice Dark Matter 42772 is compatible with both FreeSync and G-Sync so AMD and Nvidia users can enjoy VRR. This is an essential feature now so you don’t get stuck with one GPU brand for as long as you are using this monitor. Input lag is slightly higher at 6ms at 144Hz, but it is still snappy and responsive for fast-paced play.

Thoughts on the Monoprice Dark Matter 42772

The Monoprice Dark Matter 42772 is a respectable choice if you want a high-refresh ultrawide for immersive gaming. Its VA panel is capable of fantastic color coverage and contrast so it’s perfect for games and movies. It’s a budget model, but it has all the necessary features that can make the overall user experience smoother.

However, that price reduction also means that it isn’t perfect since there are some omissions or cut corners. Its lack of factor calibration and valuable extras are understandable, but many brands are increasing their offerings’ competitiveness by offering these characteristics at lower price points. The Monoprice Dark Matter 42772 is a decent choice, but there are better options out there for the same price.