The Monoprice Dark Matter 43305 looks and is built like an office monitor, except if you consider its unusual width and aspect ratio. The device has a matte black finish which is easy to maintain and fit into themed setups. The monitor isn’t bezel-free, but the size of the screen makes the borders look unnoticeable while its in use.

Desk space will be a primary issue with this model since its almost four feet wide and it can cover your desktop speakers if you have some. It doesn’t consume too much depth like the other super ultrawides but that’s because of its simplified stand. It is quite heavy and big, so you might need an extra set of hands to avoid accidents when setting it up.

Its build quality is surprisingly good compared to the first few models the budget brand has released before. The plastics used are thick enough to resist cracking and flexing, plus there were no signs of cosmetic defects. The stand has a little wobble, but it mostly happens when you touch the screen or its edges.

You will also find a lighting feature at the top of its stand which adds a decent spread of light at nighttime. The downside is it only has static and cycling color modes, and its only capable of six colors unlike the other RGB implementations out there. It doesn’t work with existing lighting ecosystems, so its control relies solely on the monitor’s OSD.

It is disappointing that the Monoprice Dark Matter 43305 still uses OSD buttons instead of a more convenient joystick. The layout is located at the bulge on the center of the bottom bezel, so at least it’s very accessible. This is common with the more affordable models in any monitor category, but other brands use joysticks even on their low-end offerings.

The stand included with the package can only offer tilt so it can be limiting for some even if you only have to center a curved ultrawide to enjoy its benefits. The display sits low for some users, so we’d gladly trade that lighting feature for height adjustments at least. You can use VESA mounts, but the added will offset the savings you get if you buy this monitor. 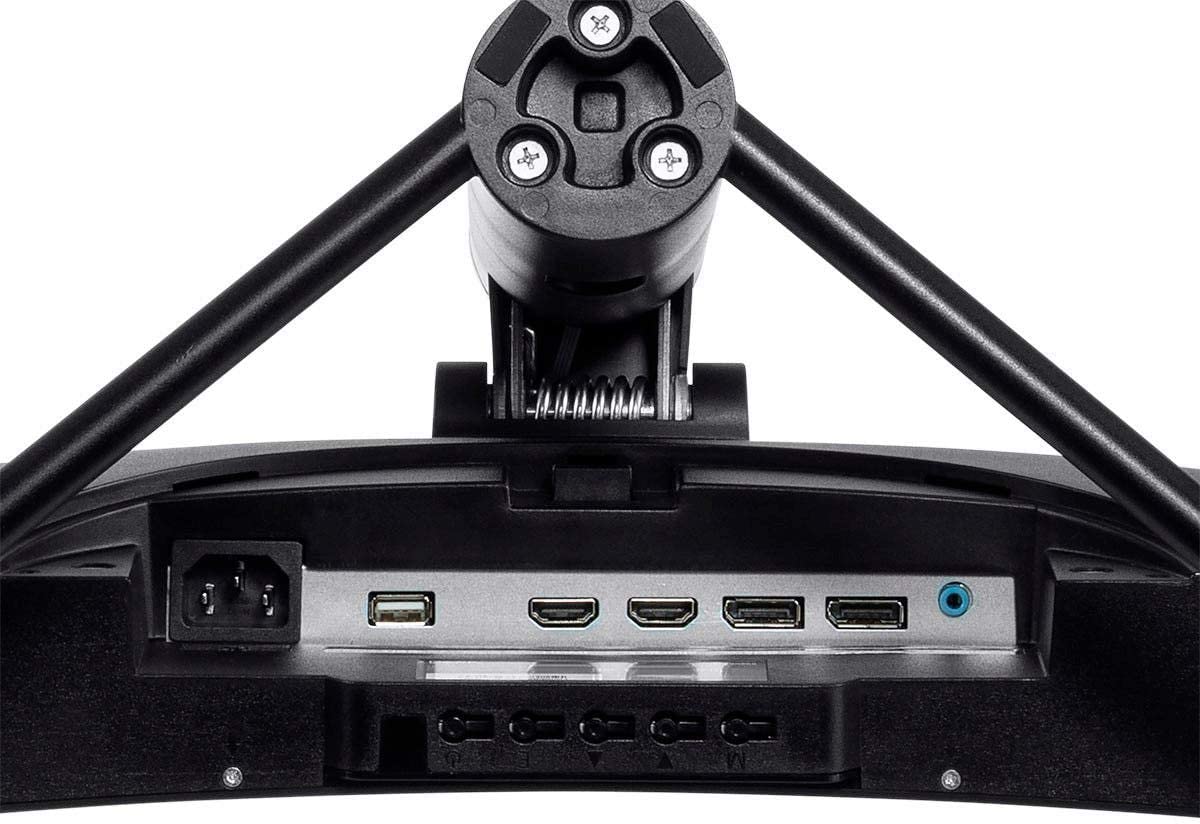 The Monoprice Dark Matter 43305’s layout offers two slots each for DisplayPort 1.4 and HDMI 2.0, along with a 3.5mm jack. It doesn’t have extras like USB ports, but the four video inputs mean that it can be used for a multitude of gaming and productivity devices. It even has a pair of built-in speakers, but they aren’t loud enough for gaming or entertainment use.

The Monoprice Dark Matter 43305 boasts a 49-inch 1500r curved VA panel with a 5120 x 1440 resolution, a 120Hz refresh rate, and a 4ms response time. The backlight has a 400 cd/m2 maximum while the contrast is listed at 3000:1 like most VA panels. This model is HDR compatible, but it doesn’t mention compliance with VESA’s basic standard.

The 5120 x 1440 resolution or DQHD (Dual QHD) is comparable to two 1440p screens minus the bezels in between that’s why its called as such. Its pixel density means games will look sharp and crisp, but visibility and legibility don’t suffer. It is great for both gaming and productivity, but you will need a more powerful GPU if you want to hit that 120Hz refresh limit.

The Monoprice Dark Matter 43305 renders more than 100% sRGB and around 96% DCI-P3 for stunning vibrancy in games and movies. However, its default accuracy isn’t as good since the dE average is too high at 3.89. This is common with extended gamut monitors, so some images might look unnatural or oversaturated.

Calibrating it with a monitor reduced the dE average to 2.09 which is better and more balanced than the stock setting. However, you need a colorimeter to bring the dE down this much, and even then, the screen won’t be on-par with prosumer variants. You are better off with a designer monitor if you need absolute accuracy, but otherwise, keying in settings to make the screen acceptable to you is your best option.

Its backlight reached 445 cd/m2 at 100% brightness so it can fight off glare in well-lit rooms. Its contrast ratio only managed to reach 2566:1 at 40% brightness, but that still means that it can produce deep blacks. However, its not capable of superb HDR performance due to these numbers which barely reach what the true HDR monitors are capable of.

The Monoprice Dark Matter 43305 sample’s panel uniformity could use some improvements since there were backlight leaks at the top edges. This resulted in clouding issues in dark scenes, although it is less noticeable in well-lit or full-colored images. This issue is common with curved displays, but not all of them have it since there are tolerances in the manufacturing process.

Its pixel response time is comparable to similar models like the Viotek SUW49DA, so it is not the fastest super ultrawide out there. It is prone to blurring in fast and contrasting transitions so it’s not ideal for competitive play. However, that shouldn’t be an issue if you are playing casual or immersive titles which were what this model was intended for.

The Monoprice Dark Matter 43305 is compatible with FreeSync and G-Sync so you won’t miss out on VRR functionality. This duality is a must-have now since specific GPUs from Nvidia or AMD are either scarce or expensive. Input lag sits at 7ms at 120Hz, so there is no need to worry about delays while gaming.

Thoughts on the Monoprice Dark Matter 43305

The Monoprice Dark Matter 43305 is a suitable choice if you want a super ultrawide for immersive gaming and productivity. It is vibrant with decent contrast, so images will look vibrant and rich. It’s one of the few 49-inch monitors you can get under a thousand, so it is worth a second look.

However, the price is the trickiest part about this model since better options like Samsung’s faster G9 models are more or less $300 away. There’s also the fact that it is missing a lot of creature comforts and it’s not the most accurate option out there. It’s a practical choice for those in the market for a super-ultrawide, but spending the extra on better models will be the wiser choice.