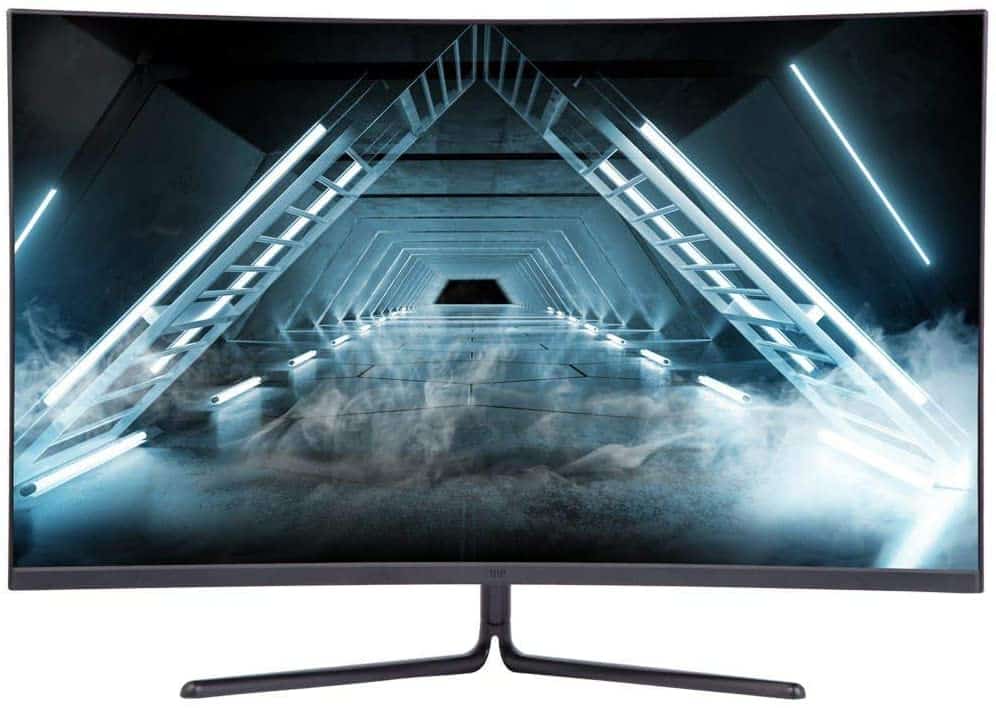 The Monoprice Zero-G 42891 offers every essential aspect of a good 1440p gaming monitor while aiming to drop its average price down. It’s a value monitor so it still has limitations, but we’re always looking at gaming and imaging performance instead of extras like RGB. Let’s see how the Monoprice Zero-G 42891 to know how it compares to its premium-branded competitors. 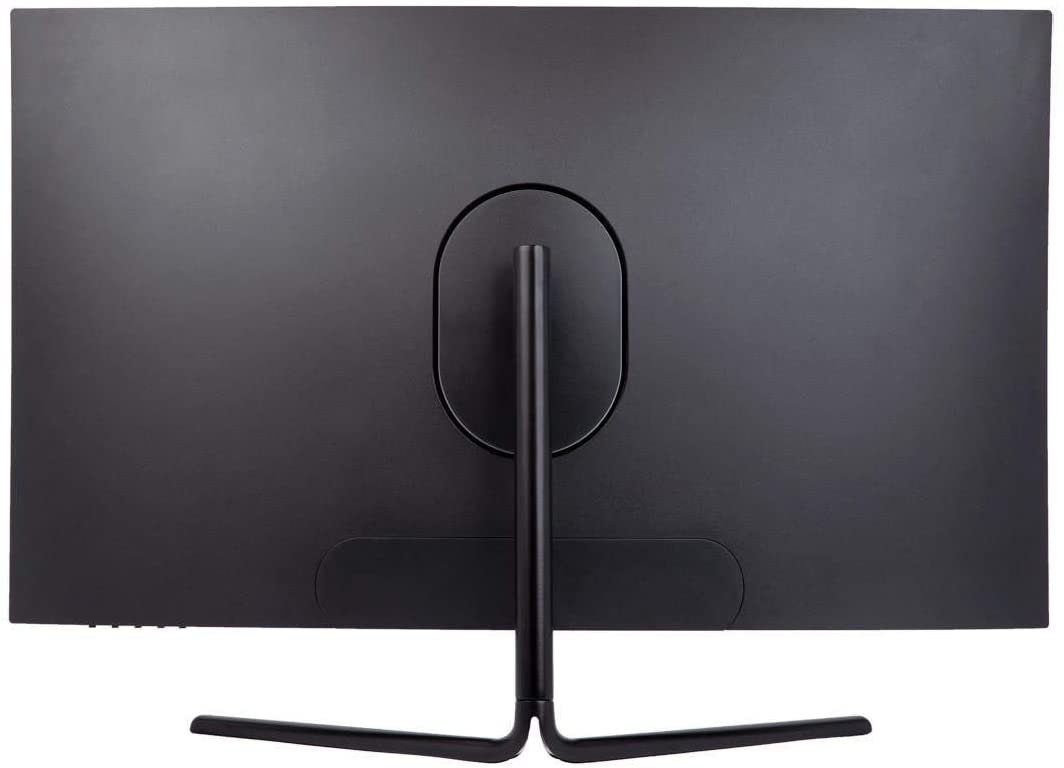 The Monoprice Zero-G 42891 looks more like a business monitor due to its simplified looks and most exterior features. The device has a matte black bezel and a metallic stand so it won’t clash with both business and gaming setups. The display isn’t completely bezel-free, but the three sides have thinner borders.

It’s not an ultrawide, but 32-inch monitors can still surprise you with their size if you have a small desk. The good news is it only needs nine inches of depth, but its width can cover large desktop speakers if your table is narrow enough. It’s not too heavy at 15.7 pounds, but it would be wise to ask for help since it is easy to accidentally tip the screen over due to its size.

Build quality for the Monoprice Zero-G 42891 has decent build quality considering that it’s made to be cheaper. The plastics used are reasonably durable and there were no cosmetic defects on any of its parts when it was unboxed. The included stand has a slight wobble, but it only happens if you nudge the screen or try to adjust it.

The Monoprice Zero-G 42891 is a budget model, so it has OSD buttons instead of a more user-friendly joystick. The keys are located at the bottom bezel so you don’t have to reach over to access them. However, it still takes more gestures and presses to get to a specific setting, so we still prefer joysticks which aren’t that rare anymore on budget models.

The Monoprice Zero-G 42891 includes a metal stand that keeps the whole device upright adequately. However, it only offers tilt for adjustments, so your only option is to center the screen to your seating position to maximize it. You can use VESA mounts with 75 x 75 adapters, but that’s only necessary if space is limited, if you have multiple screens, or if the screen sits too low for you. 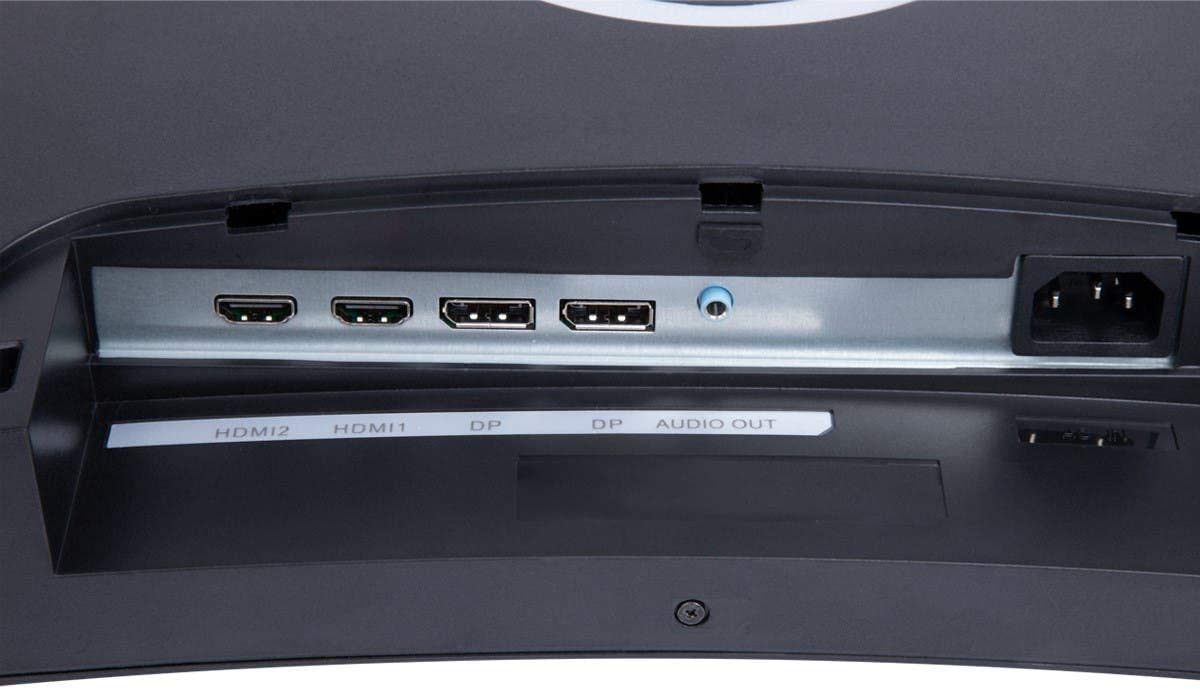 What we like about the Monoprice Zero-G 42891 is its connectivity layout which includes two slots each for DisplayPort 1.4 and HDMI 2.0. It doesn’t have extras like USB ports aside from its audio jack, but at least it can be used for a multitude of devices when necessary. It doesn’t have speakers, but that’s okay since you are getting a large high-refresh screen for the price.

The Monoprice Zero-G 42891 boasts a 32-inch 1500r curved VA panel with a 2560 x 1440 resolution, a 165Hz refresh rate, and a 6ms response time. The backlight has a 300 cd/m2 maximum while the contrast ratio is listed at 3000:1 like most VA panels. This monitor advertises HDR compatibility, but it is not certified so it can only receive and translate HDR10 signals as best it could.

1440p monitors are your best bet if you want an upgrade in sharpness without spending too much. Larger QHD screens like this model aren’t as sharp as the more popular 27-inch versions, but the benefits of the extra pixels are still there. Images are crisper and cleaner, but text and small objects aren’t too difficult

The Monoprice Zero-G 42891 renders more than 100% sRGB and 89% DCI-P3 so colors and rich and well saturated. The default accuracy isn’t perfect with its 2.81 deltaE average, but that’s within acceptable limits for color quality. Most users won’t need to calibrate it apart from a few minor adjustments such as getting a comfortable brightness level.

Calibrating the device reduced the dE average to 1.56 which is better, but not as impressive as some of the results we’ve seen. You need a colorimeter to achieve an improvement like this, and those aren’t cheap. We don’t recommend getting one just to calibrate this model since it’s not practical for gaming.

Its backlight reached a healthy 329 cd/m2 at 100% so it can fight off glare in well-lit rooms such as those with plenty of windows and natural light. Its contrast ratio peaked at 3115:1 at 60% brightness, so the screen is capable of deep blacks and rich colors. This is the main reason people choose VA panels over IPS, especially since only the more expensive OLEDs or FALD backlights are better in this regard.

Panel uniformity for the Monoprice Zero-G 42891 could be better since there are some clouding issues on the top and bottom edges of the screen. They aren’t noticeable most of the time, but dark scenes and images can reveal them if you look close enough. Note that this isn’t permanent since it’s mostly due to tolerances, so there are better units out there.

The Monoprice Zero-G 42891’s main weakness is its pixel response time which caused some blurring and ghosting in fast-paced scenes. It is more common on contrasting transitions such as when an explosion fares up in a night scene. You can use the screen’s overdrive feature, but it only helps modestly so it can’t completely remove the persistence.

The Monoprice Zero-G 42891 is compatible with both FreeSync and G-Sync so you won’t have to worry about losing VRR. It is handy to be compatible with both since there is no guarantee that you will get the GPU brand that you want at a good price. Input lag sits at 6ms at 165Hz so there is no need to worry about delays while enjoying your favorite titles.

Thoughts on the Monoprice Zero-G 42891

The Monoprice Zero-G 42891 offers excellent value for those who want a large 1440p screen for immersive gaming. It offers decent image quality and overall performance, so most would be happy with it. It doesn’t have the usual extras, but the dual DisplayPort 1.4 and HDMI 2.0 slots make it suitable for users with multiple devices.

There is definitely room for some improvement, but most of its limitations such as the tilt-limited stand are expected because of the price. It is also less suited for E-Sports due to the slower response time, so you have to spend more on a fast-IPS variant. It’s a good choice for thrifty gamers and builders, but we know a few that would rather spend the extra cash to avoid its limitations.