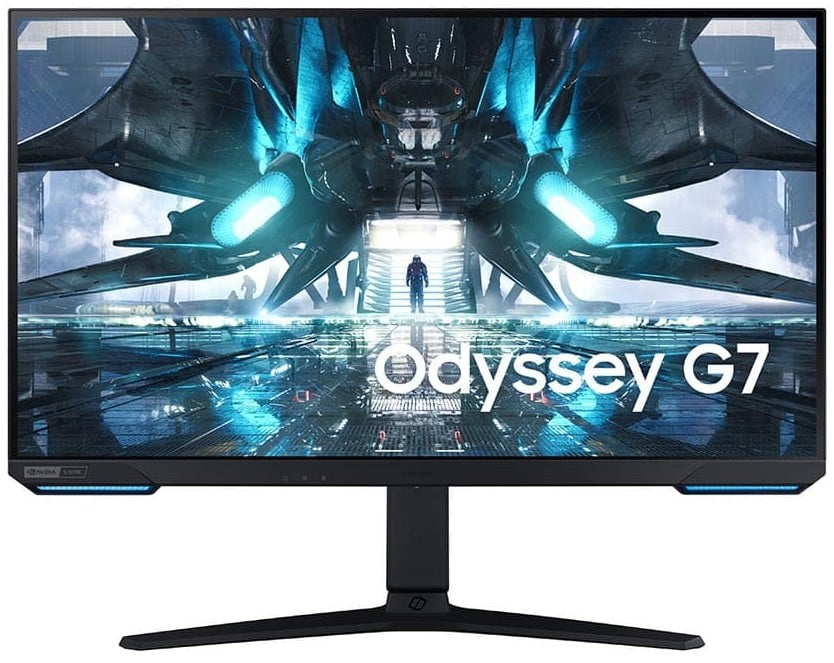 The Samsung Odyssey G7 S28AG70 is the brand’s representative in the hotly debated HDMI 2.1 monitor segment for PC and next-gen consoles. It uses an IPS panel which is more common in the 4K 144Hz category versus the VA and QLED variants used on the other Odyssey monitors. Let’s find out if the Samsung Odyssey G7 S28AG70 is the top pick and if it’s well worth its premium price point. 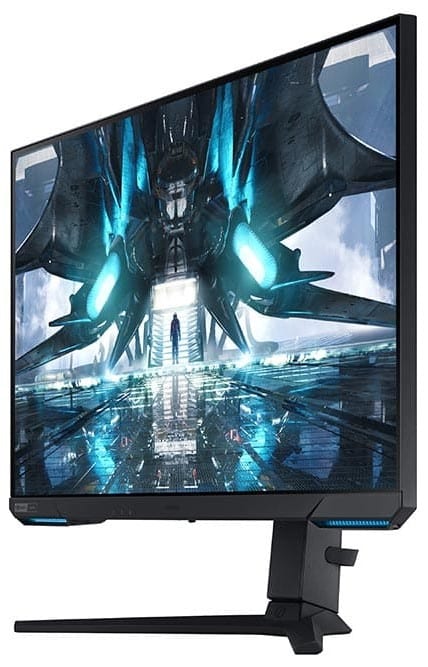 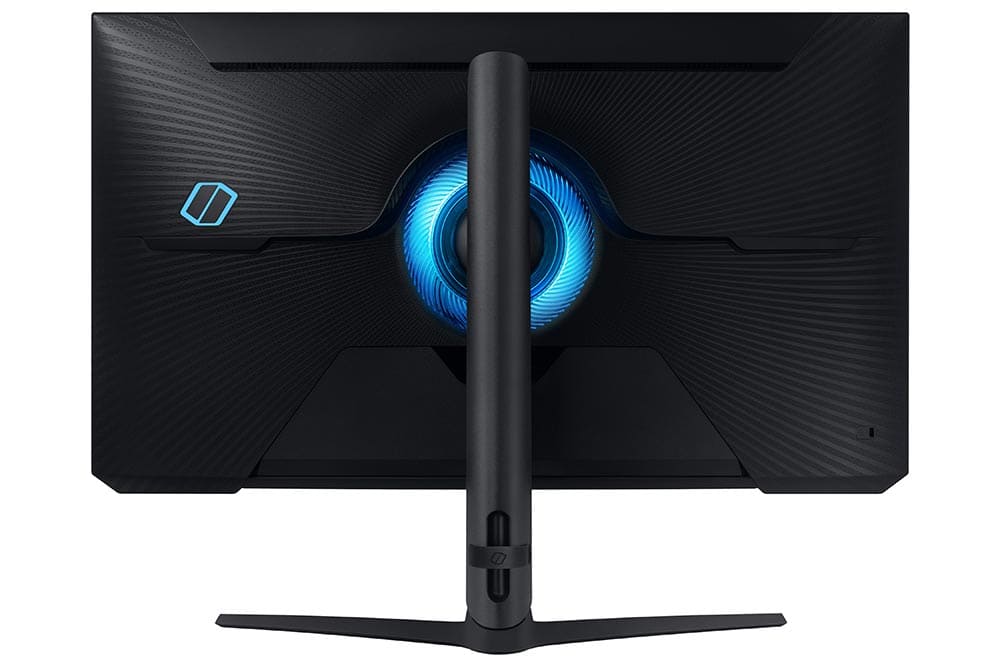 The Samsung Odyssey G7 S28AG70 uses a newer and bolder look that makes it more attractive without being too gaudy. The device has a matte black finish with a texturized back panel, so it looks clean and sophisticated enough for business setups. The display is bezel-free on three sides, but you will still see inner borders when it’s in use.

It’s larger than the usual monitor, but it is not gigantic as the Odyssey Neo G9 which is more or less double in width. You still need a bit of space for this model since its stand is quite large than what standard offerings include. It’s not too heavy at 17.42 pounds, so setting up should be easy without an extra set of hands.

Build quality for the Samsung Odyssey G7 S28AG70 is great since it didn’t see too much cost cutting like the G3 variants. The plastic panels are thick and sturdy, so they will not crack or flex with moderate force. The included stand is firm and stable so you don’t have to deal with a wobbling or sagging screen while in the heat of battle.

Another distinct feature of the Samsung Odyssey G7 S28AG70 is its RGB LEDs at the back and on the two corners of the bottom bezel. The monitor’s CoreSync feature can manipulate it to match the colors on the screen and provide an immersive bias light. It’s a nice feature to have, although we know that not everyone is a fan of colorful lighting for their gaming setups.

You also get a useful OSD joystick with the Samsung Odyssey G7 S28AG70 instead of buttons which are more time-consuming to use. Its located just under the Samsung logo, so it is easy to reach and use for adjusting something on the fly. Other premium offerings have remotes and software, but what this model has is sufficient based on our experience.

The included stand offers tilt, swivel, pivot, and height adjustments for your convenience. It is easy to get a comfortable viewing angle and the monitor will let you arrange your gaming setup without any other complications. You can use VESA mounts with this model, but it’s unnecessary unless you have multiple screens or if desk space is limited.

One of the special features of the Samsung Odyssey G7 S28AG70 is its well-equipped connectivity layout. The panel at the back includes DisplayPort 1.4 DSC for 4K 144Hz with PCs and two HDMI 2.1 slots for 4K 120Hz with the PS5 and Xbox Series X. You also get three USB 3.0 ports and a 3.5mm jack, but there is no USB-C to complete the package.

The inclusion of HDMI 2.1 is the biggest selling point here since gaming enthusiasts would also want to maximize their next-gen consoles’ capabilities. There are no speakers with the monitor, but that’s okay since it deserves a better audio solution such as surround speakers or a high-end headset for better immersion.

The Samsung Odyssey G7 S28AG70 boasts a 28-inch IPS panel with a 3840 x 2160 resolution, a 144Hz maximum refresh rate, and a 1ms boosted response time. The backlight has a 400 cd/m2 maximum while the contrast ratio is listed at 1000:1, unlike the other Odyssey monitors which have VA panels. This model is certified with HDR 400 capabilities, but we all know how limited that is in improving images and video.

4K looks extra-sharp at screens of this size so they can be considered an upgrade versus a larger TV with less pixel density. Games and movies will always look good, but it’s worth noting that text can sometimes appear too small for some users. There’s also the obvious fact that 4K screens still require flagship GPUs if you want maximum framerates with newer titles.

The Samsung Odyssey G7 S28AG70 renders 100% sRGB and around 88% DCI-P3 which is decently vibrant for gaming. Its default accuracy is even better since the deltaE average is only at 1.65 so it is accurate enough to be used right away. Most users will be happy with the default setup, so only some minor tweaking like adjusting the brightness will be necessary.

Calibrating the Samsung Odyssey G7 S28AG70 reduced its dE average to a superb 0.88. That’s acceptable for professional use and it’s considerably better than the calibrated results produced by its VA counterparts. However, you will need a colorimeter to get a level of improvement like this, and it is not worth the extra cost if you are using the monitor exclusively for gaming.

The screen hits 295 cd/m2 in SDR, but its peak brightness reached 405 cd/m2 when HDR is active. Its, contrast, however, is unimpressive at 1055:1 at 60% brightness, plus there is little improvement when HDR kicks in. This is a known limitation of IPS panels, and only special but expensive implementations such as Mini LEDs can change that.

Panel uniformity for the Samsung Odyssey G7 S28AG70 sample is good since backlight bleeding wasn’t an issue. There are some deviances in the backlight’s spread, but it wasn’t noticeable while gaming. Take note that this model uses IPS which is more prone to these issues, so there are worse units out there.

The Samsung Odyssey G7 S28AG70 is fast when it comes to pixel response times like many of the Fast IPS models in the market. You don’t need to push its overdrive beyond the Standard setting since it already reduces the persistence at an acceptable level. Next-gen consoles only go up to 120Hz versus 144Hz on PC, but there is little to no difference between the two modes.

The Samsung Odyssey G7 S28AG70 is a FreeSync monitor but it’s also compatible with Nvidia’s G-Sync. This is a must-have feature when buying a new monitor since the GPU market is unstable, so it’s almost impossible to find a specific GPU from one company at any given time. Input lag sits at 4ms at 144Hz, so there is no need to worry about delays while gaming.

The Samsung Odyssey G7 S28AG70 is an excellent choice if you want a capable monitor that caters to both enthusiast PC and next-gen console gaming. Its IPS panel offers great colors and responsiveness, although it can only offer limited HDR improvements. We like its design and its RGB lighting is a nice touch, giving those who invested in it a pleasurable viewing experience.

The Samsung Odyssey G7 S28AG70 has a higher price than some of its closest competitors such as the Gigabyte M28U. Its performance gap with its rivals is close to negligible, so the only way to justify that extra premium is if you really like its add-on features. However, we think you will not be disappointed with it, so it’s a great buy if you own a powerful PC and one of the two 4K 120Hz consoles.