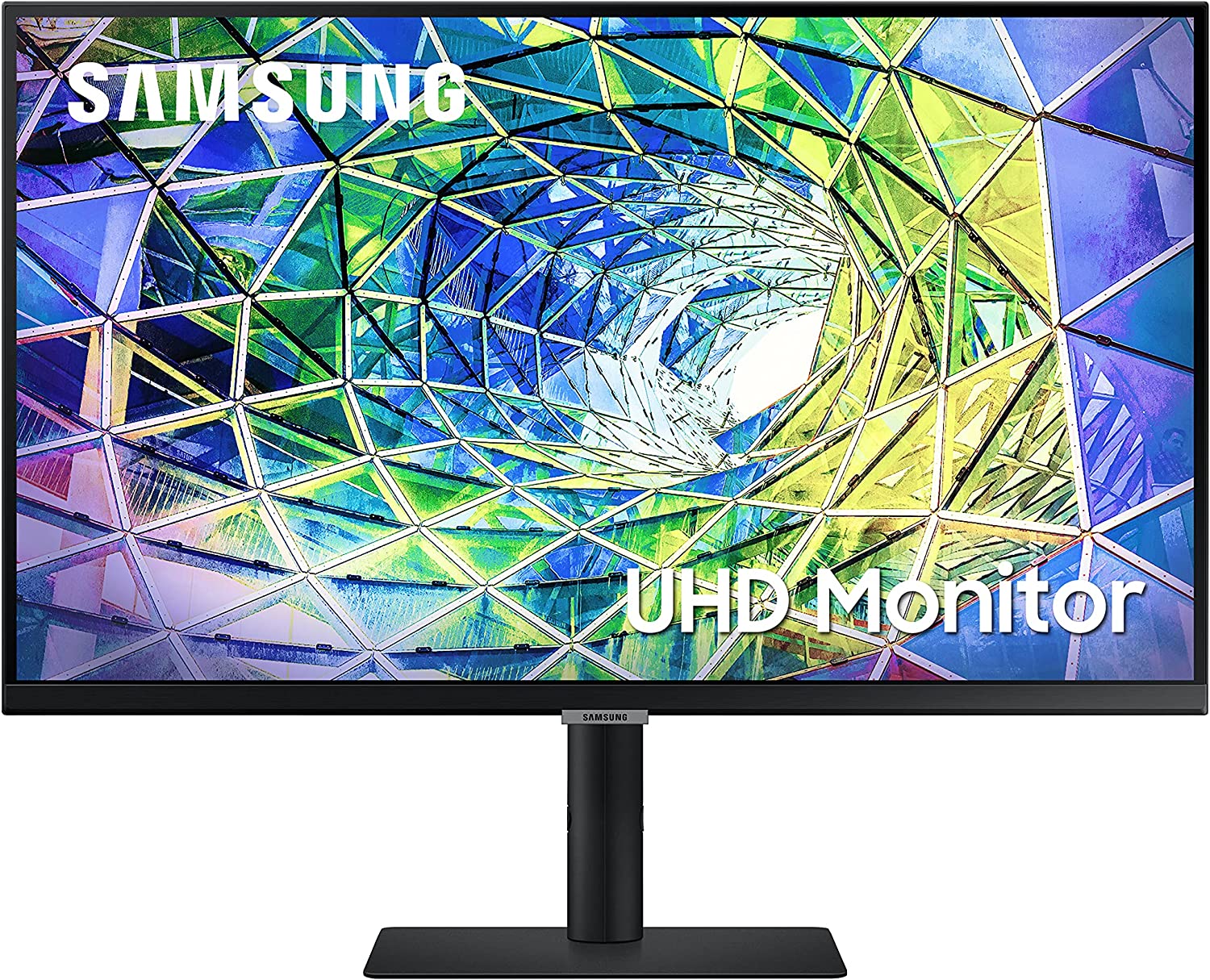 The Samsung S80UA offers 4K IPS panel with superior image quality along with some modern features like USB-C for today’s professionals. The brand usually offers VA panels at this price range, so it’s pretty interesting to see what they can do with an IPS variant. Let’s see if the Samsung S80A can edge out some of its competitors in aspects that matter the most. 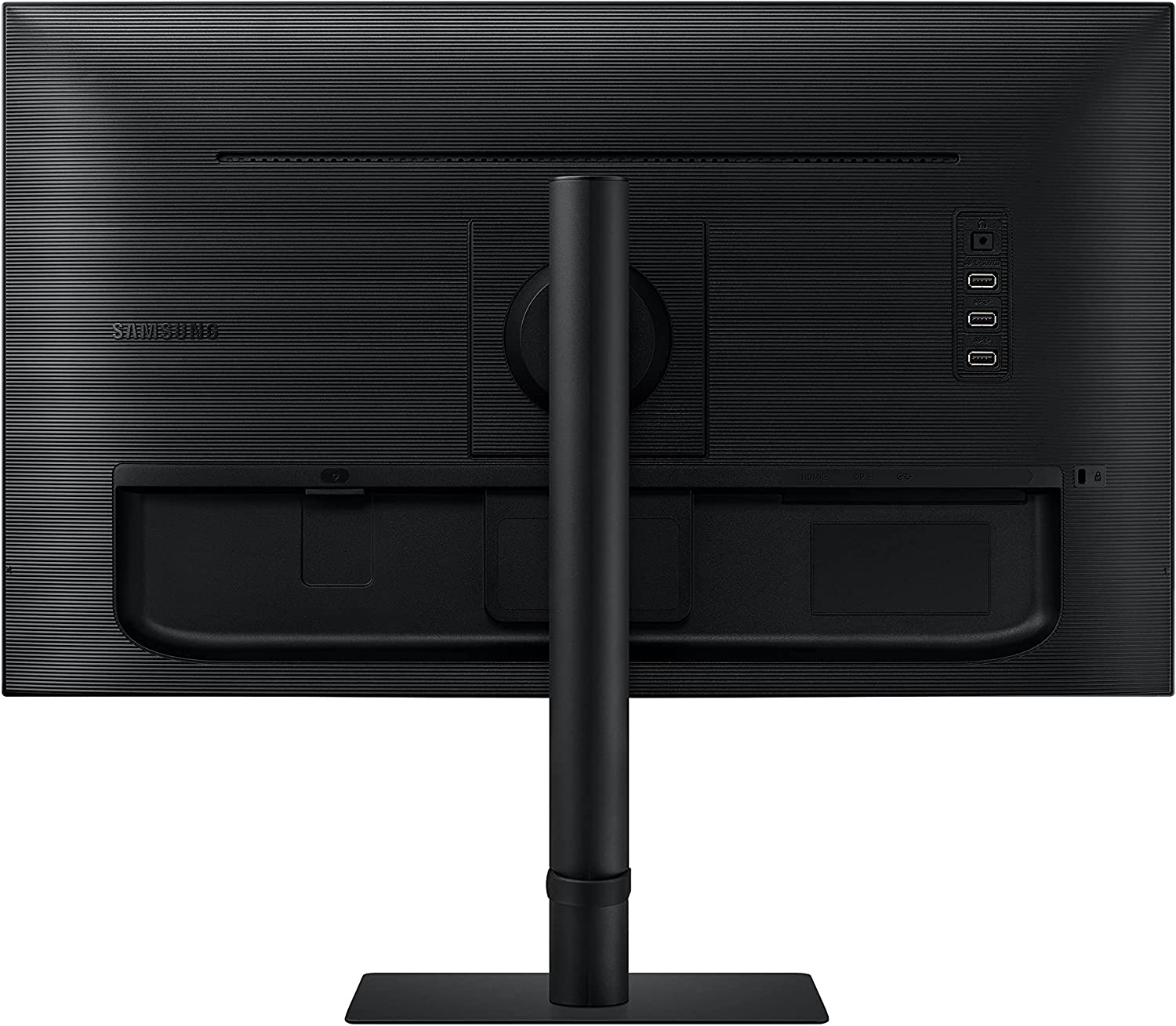 The Samsung S80UA isn’t as decorative as the Odyssey flagships, but we know its simplicity and functional appeal are attractive to many users. the monitor has a matte black finish with a textured back panel so it looks timeless and it will not clash with most setups. The display is bezel-free on three sides, but you will still see inner borders when it’s in use.

We like that the Samsung S80UA is one of the sleekest 4K monitors around when it’s fully assembled. It needs less than eight inches of depth from your desk so it won’t push your other peripherals away. It’s not too heavy at 14.8 pounds, so assembling it and setting it up for first-time use should be easy for most users.

Build quality for the Samsung S80UA is great thanks to plastic panels that are thick and its robust stand. There is no wobbling on the monitor and the chassis itself doesn’t flex or crack easily when moderate force is applied. We didn’t see any cosmetic defects as well indicating that this model received the same stringent quality control as its more expensive siblings.

The Samsung S80UA doesn’t have an OSD joystick like many of the brand’s budget and upper-tier offerings. What it has instead is a button layout under the logo that’s arranged in a circular pattern to help users familiarize themselves with the layout. It’s better than usual, but joysticks are still quicker and easier to use for most users.

The stand included with the Samsung S80UA offers a full range of adjustments even if it’s a lower-ranged 4K monitor. You can tilt, swivel, pivot, and adjust the height of the screen so getting a comfortable viewing angle is readily doable. You can also use VESA mounts with this monitor, but it’s highly unnecessary unless your desk space is already tight.

The Samsung S80UA only includes a slot each for DisplayPort 1.2 and HDMI 2.0, but it also includes a 90-watt USB-C for laptops. The latter increases its versatility with modern laptops, leaving the other slots for gaming PCs and consoles. You also get three usable USB 3.0 ports, along with a 3.5mm jack for analog audio.

What the Samsung S80UA doesn’t have is a pair of built-in speakers that could complete its business-oriented nature. We usually don’t mind, but the popularity of work-from-home setups is at an all-time high. Speakers could be used for conference calls or even background music, so they have value now more than ever.

The Samsung S80UA sports a 27-inch IPS panel with a 3840 x 2160 resolution, a 60Hz refresh rate, and a 5ms (Fastest) response time. The backlight has a typical 300 cd/m2 brightness while the contrast ratio is listed at 1000:1 like most IPS panels. This model offers HDR10 compatibility, but it isn’t equipped for upgraded effects and visuals like some flagship models we’ve reviewed.

The pixel density on the Samsung S80UA offers crisp and detailed images making it perfect for games, movies, and imaging. However, we’ve seen many complaints regarding legibility since text can become too small for users with anything less than 20/20 vision. You can solve that with scaling, but it doesn’t always work with every app or program out there.

The Samsung S80UA renders considerably more than 100% sRGB and around 95% DCI-P3 for excellent vibrancy. Its default accuracy isn’t perfect, but the deltaE average of only 2.88 is already great for daily use. The screen features punchy colors so games, movies, and images will look great full and rich all the time.

Calibrating the Samsung S80UA reduced its dE average to 1.13 which isn’t the best we’ve seen, but acceptable for content creation purposes. Doing this balances out some of the screen’s oversaturation, but it isn’t necessary for casual or business use. Colorimeters aren’t cheap after all, and the IPS panel on this model is already decently tuned from the factory.

The backlight on the Samsung S80UA reached 331 cd/m2 at its highest level which is plenty for most cases. Its contrast peaked at 1085:1 at 60% brightness which is within spec, but that’s not high enough to produce deep blacks or low black luminance. Some dark scenes can still look grayish especially at night, but that’s a known limitation for IPS technology.

Panel uniformity for the Samsung S80UA was great since most of the deviances were not noticeable unless you looked for them. They can appear as very light clouding in dark scenes, but it’s considerably better on this model than some IPS panels we’ve seen. Take note that this aspect varies wildly between every monitor due to tolerances and the nature of IPS, so there are better and worse units out there.

The Samsung S80UA is capable of decent motion handling even if it is not built for gaming. You need to use its Fast overdrive setting to reduce the persistence and smudges, but there will still be some minor flaws in contrasting transitions. using the Fastest level isn’t ideal since it induces some overshoot, so there is really no way to make the monitor completely blur-free.

The Samsung S80UA doesn’t have FreeSync or G-Sync support, so gamers cannot rely on VRR to stave off tearing and stuttering. That’s understandable since this is a business monitor, so optimizing your graphics settings is your only bet in stabilizing framerates. Input lag sits at 10ms at 60Hz, so the monitor still feels snappy and responsive even when it’s used for playing.

Thoughts on the Samsung S80UA

The Samsung S80UA is an excellent choice if you want a 4K monitor with modern capabilities for home and office use. Its 90-watt USB-C port is crucial for owners of laptops with juicy specs since most in the same price range only offer an insufficient 65 watts. The screen’s color pop and rich saturation make it great as a media monitor as well for games, movies, and even some content creation.

It does have a few flaws such as the lack of speakers or an easier interface, but that’s understandable for lower-priced models. The Samsung S80UA isn’t a do-it-all monitor, but it excels at what it’s designed for in the first place. It’s a great buy for those who want a high-quality display at home, but gamers should look elsewhere.

Search
NEW
POPULAR
You are here: Home / Reviews / Samsung S80UA Review –4K IPS Monitor with USB-C for Business – Highly Recommended
This website uses cookies to improve your experience. We'll assume you're ok with this, but you can opt-out if you wish.Accept Read More
Privacy & Cookies Policy