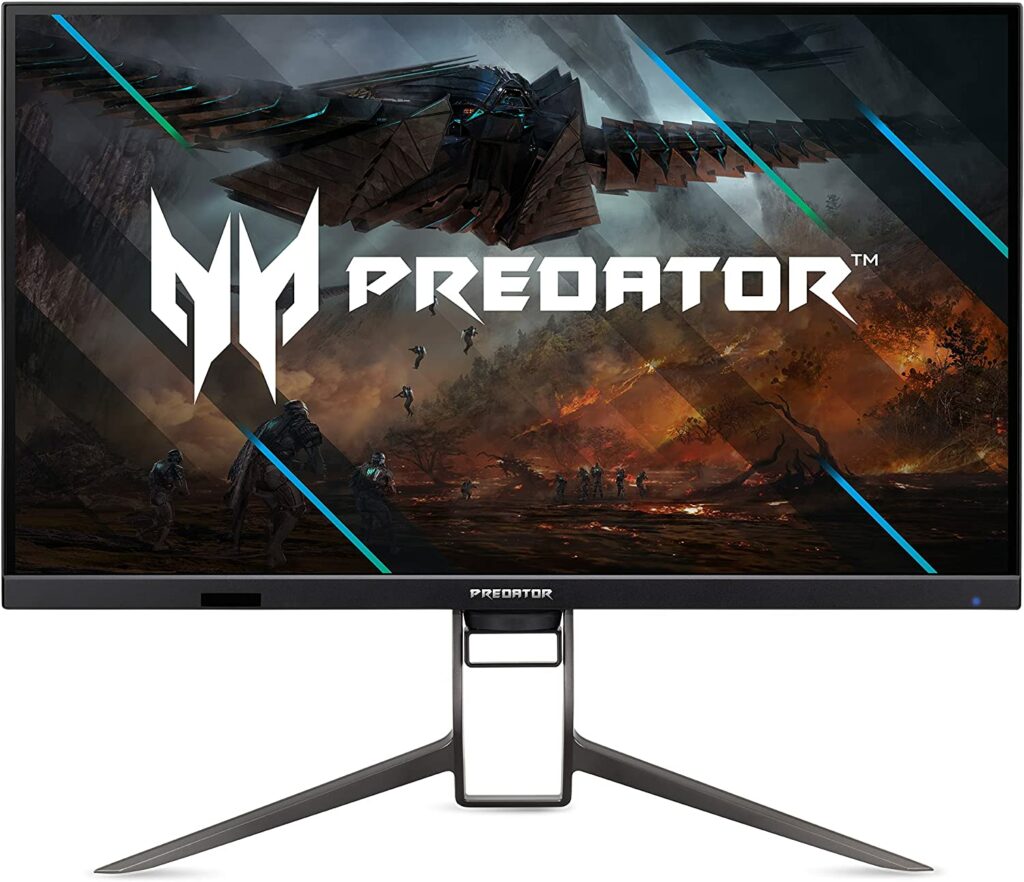 The Acer Predator XB323QK is a premium 4K gaming monitor that emphasizes speed and impressive image quality. It’s a high-end variant since it belongs to the Predator line, but it is still limited to HDR 400 certification like the Aorus FI32U or the BenQ Mobiuz EX3210U. These are excellent monitors, so it would be interesting to see if the Acer Predator XB323QK can come out on top. 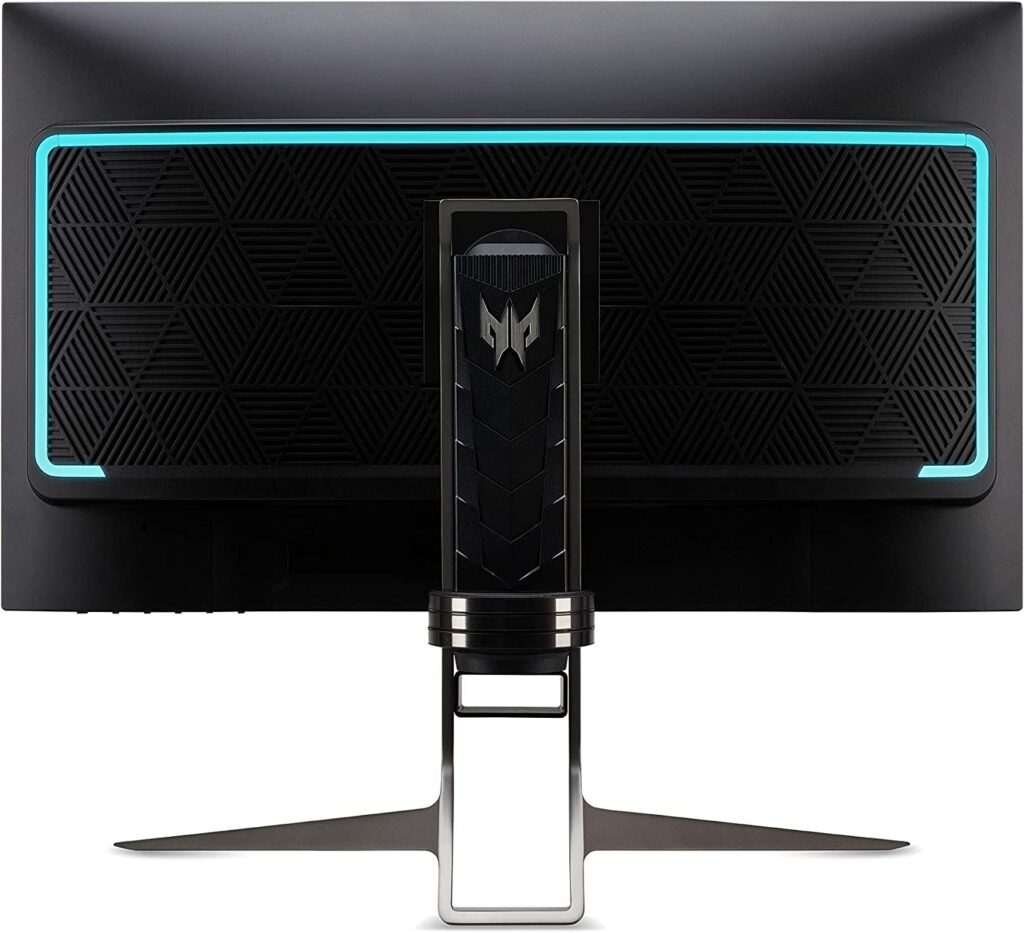 The Acer Predator XB323QK has the same aesthetic as the X25, but it uses the stand design that you will find on larger monitors like the X34 GS and the X38S. The chassis is in matte black but the metal base has a gunmetal gray finish. The display has a three-sided bezel-free design, but it still has minimal panel borders.

It’s a large monitor so you need to consider how much desk space you have before upgrading. The device needs over 2 feet of width and a foot of depth, so it might offset some of your larger peripherals like speakers or full-sized keyboards. It’s also quite heavy at almost 30 pounds so extra care will be necessary when you set it up.

Its build quality is great thanks to its Predator lineage which has always featured fantastic material selection and design. The plastic panels are thick and sturdy so they won’t crack or flex with moderate force. The stand and its metal stand offer excellent stability so the monitor won’t sag or wobble while you are enjoying games. 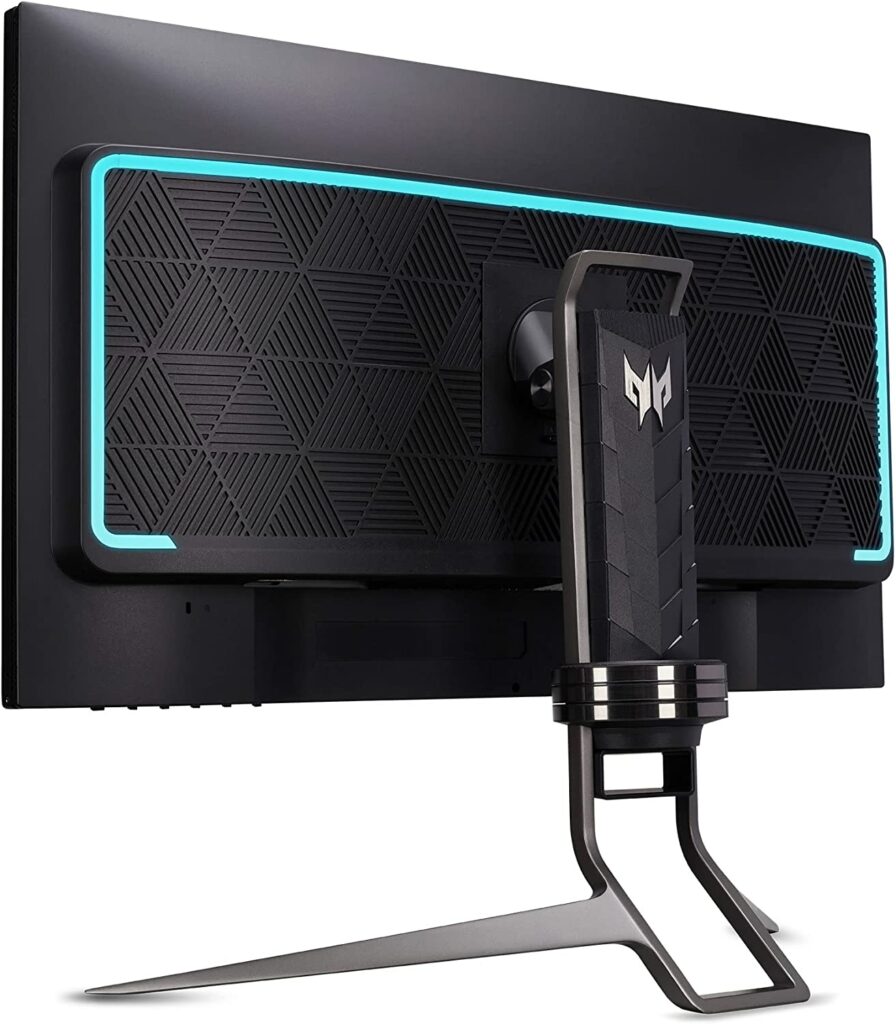 You will also find an LED light strip surrounding the bulge at the back for the Acer Predator XB323QK’s chassis. What we like about it is it adds just the right amount of glow which serves as a bias light that can help keep your eyes comfortable. The downside is that it cannot be synced with existing RGB ecosystems so you can only tweak it via the monitor’s OSD.

It is disappointing that the Acer Predator XB323QK still uses OSD buttons instead of a more convenient joystick. It’s perplexing why Acer went with this for one of their premium offerings since almost every Predator monitor out there has a joystick. The buttons are located under the bottom bezel so they are accessible, but it still takes more time and effort to get to a specific setting.

The stand included with the package offers tilt, swivel, and height adjustments for your comfort and convenience. Pivoting wasn’t included, but that’s okay since this monitor was not designed to be used as a portrait display on the side. You can use VESA mounts, but it is only necessary if your desk space is limited or if you are using multiple screens.

Another highlight of the Acer Predator XB323QK is its connectivity layout which includes the latest video input standards. You get a DisplayPort 1.4 DSC for your PC and two HDMI 2.1 ports for 4K 120Hz operation with the latest gaming consoles. It also has a 65-Watt USB-C slot for newer laptops like the MacBook Pro, a 3.5mm jack for headphones, and a total of 4 USB 3.0 slots for your peripherals.

It also has built-in speakers in the monitor, but they only have 4 watts per channel of power. They can get louder than your usual built-ins, but they distort at high volume levels and are incapable of decent bass response. You are better off using headsets since they are focused and tuned properly for the monitor’s intended use.

4K looks and feels much better when it is on a larger screen since the pixel density won’t be so tight. Reading, typing, and browsing will be easier on your eyes but you don’t lose the crispness 4K brings o the table. The extra pixels are still there, but be mindful of the GPU that you will use with this monitor, especially if you want to hit the 144Hz limit.

The Acer Predator XB323QK renders more than 100% sRGB and around 96% DCI-P3 coverage for stunning color in games and movies. Its default accuracy is great since the deltaE average is only at 1.45, so most users won’t need to calibrate it. It looks balanced and natural out of the box so only a few tweaks will be necessary before you start using the monitor.

Calibrating it reduced the dE average to 0.48 which is fantastic for a display product that focuses on entertainment and gaming. The downside is you need a colorimeter to achieve this, and they aren’t cheap or readily available. We recommend using the sRGB mode instead to avoid spending more, although the gadget will be worth it if you will use this monitor to make money.

Its backlight reached 391 cd/m2 in SDR and a peak output of 445 cd/m2 when its HDR mode is in use. however, its contrast is unremarkable since it only peaked at 951:1 at 40% backlight, unlike the FALD-equipped HDR monitors. The monitor isn’t capable of deep blacks and appreciable HDR performance just like most of the HDR 400-limited IPS variants out there.

The Acer Predator XB323QK’s panel uniformity didn’t have any considerable issues like backlight bleeding or clouding. There are some variances in the backlight’s spread, but it is only noticeable in specific circumstances or while the colorimeter was scanning it. Note that this can change since there are manufacturing tolerances to consider so you might get a unit with flaws.

Another special characteristic of this product is its blur-free performance thanks to its fast pixel response time. You will still get some persistence and minor smudges, but you won’t need to max out its overdrive to help clear it. It’s ideal for fast-paced games, but you have to keep your framerates high to get this level of performance.

The Acer Predator XB323QK is compatible with both FreeSync and G-Sync so you won’t have to worry about tearing and stuttering. Both brands have capable 4K cards, so it’s always best to get a monitor that won’t tie you down to a single company. Input lag sits at 6ms so there is no need to worry about delays while gaming.

Thoughts on the Acer Predator XB323QK

The Acer Predator XB323QK offers fantastic performance and design for PC or console gaming, along with productivity. Its Agile Splendor IPS panel offers excellent color fidelity and pixel response times so games will always look vibrant and blue-free. We like how it’s designed especially since it comes with the latest connectors along with a more mature aesthetic compared to the first few Predator models.

However, there are a few disappointing aspects of the Acer Predator XB323QK, starting with its high price that doesn’t even include local dimming. It’s also confusing why Acer decided to use buttons for the OSD at this price range, especially when its other offerings already use joysticks. It’s a fantastic monitor when it comes to performance, but it should get a discount from its steep MSRP.