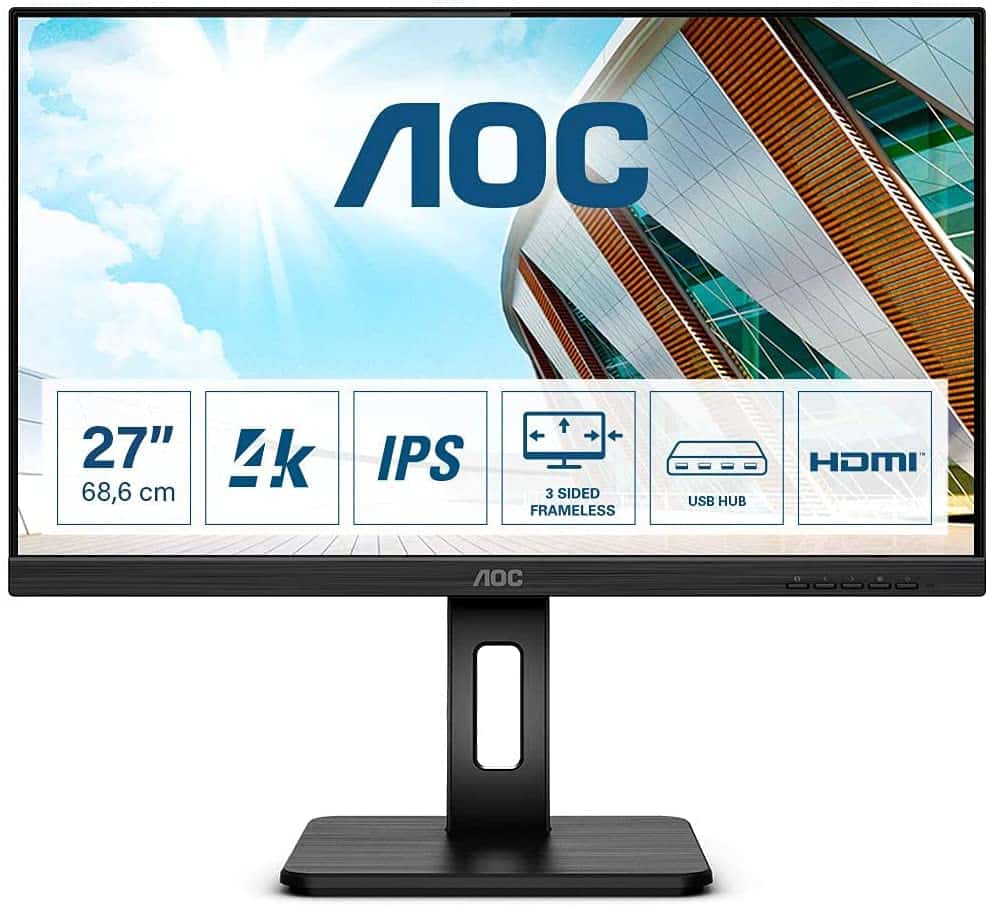 The AOC U27P2 is a reasonably-priced 4K monitor that’s designed for reliability and functionality at home and in the office. It doesn’t have special features, but that means you don’t pay a premium to enjoy the crisp screen for daily use. Let’s see how the AOC U27P2 performs to know if it’s versatile enough for popular applications such as gaming and content creation. 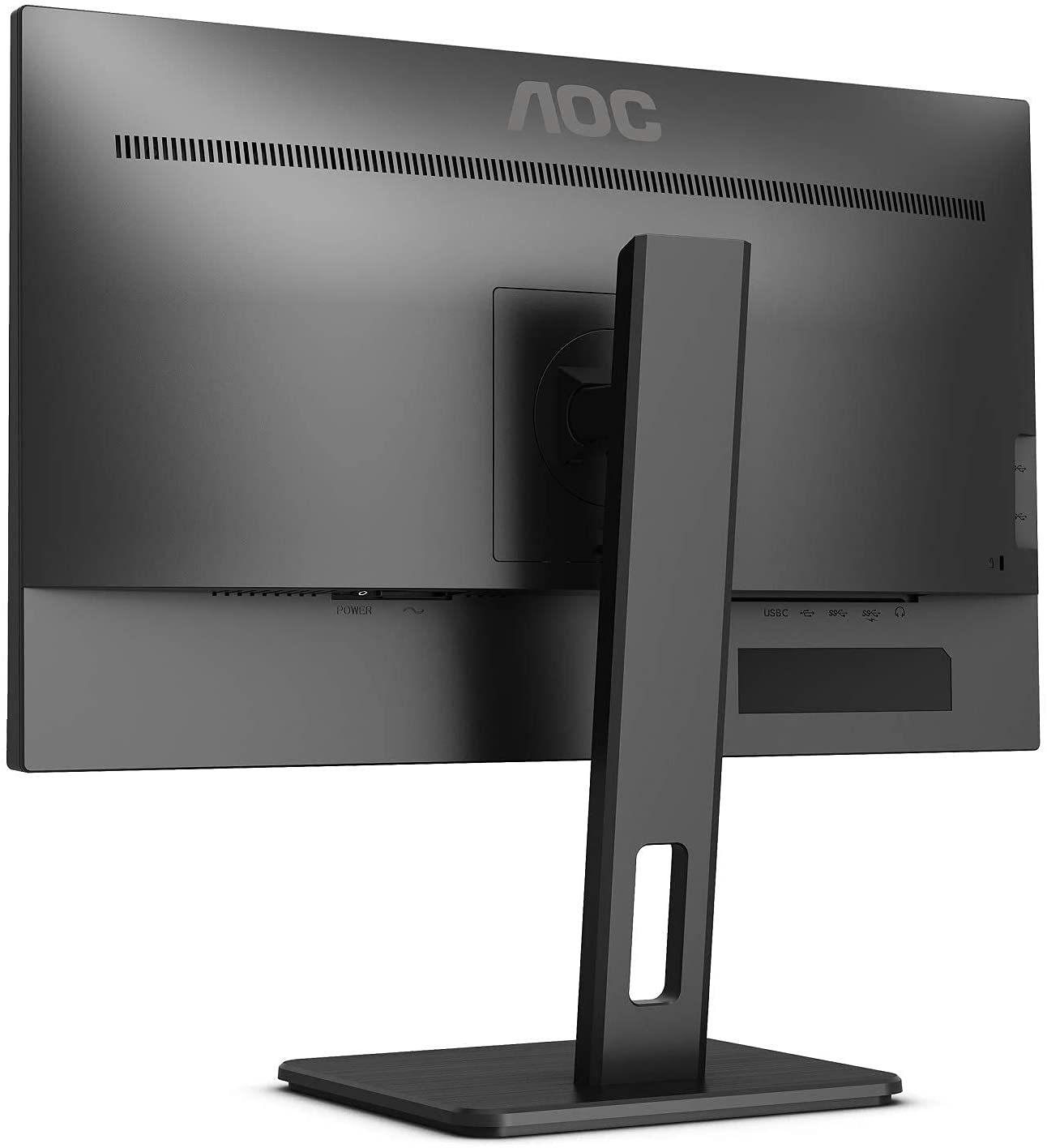 The AOC U27P2 looks like any home or office monitor, but it’s sleeker and cleaner-looking than many of its competitors. It has a matte black finish that looks clean and it is easy to clean without scratching the surfaces. The display is bezel-free on three sides but you will still see slim inner borders if you look close enough.

The monitor once fully-assembled doesn’t take up a lot of space so it should fit into study corners or home offices. The device only needs 7.88 inches of depth so you have more room for peripherals other than the usual keyboard and mouse combo. It’s also not too heavy at 14.77 pounds so it’s portable enough to move around if you rearrange often.

Build quality is excellent for the AOC U27P2 and most would think that it has a very reasonable price. The plastics used are thick and reinforced so they won’t flex or crack easily even if you squeeze them. The included stand is firm and stable so the display won’t wobble or sag on you while you are enjoying movies or working on your tasks.

One downside with the AOC U27P2 is it still uses buttons for its OSD instead of a more convenient joystick. The layout is located at the front on the bottom bezel so you can see them directly, but it takes more strokes to get to a specific submenu or setting. However, this is forgivable considering the monitor is priced lower unless you calibrate your screen regularly.

The stand included with the AOC U27P2 offers tilt, swivel, pivot, and height adjustments for your convenience. It doesn’t take up a lot of space and it offers flexibility that can provide a comfortable viewing angle. You can use VESA mounts instead, but it’s unnecessary unless you have multiple displays or if desk space is very limited.

You will also find a DisplayPort 1.2 slot and two HDMI 2.0 ports, along with four USB 3.2 connectors for peripherals. That’s all you will ever need, but the product could use a USB-C slot for even more versatility. However, the latter can raise the price considerably, so it’s understandable that it is not included in this tier.

The AOC U27P2 also has a pair of speakers for basic needs such as conference calls or even some background music while working. However, 2 watts isn’t a lot, so they can’t get loud enough for entertainment use. headsets and desktop sets will be better in the long run, but it’s always nice to have a backup that’s already included in the package.

The AOC U27P2 sports a 27-inch IPS panel with a 3840 x 2160 resolution, a 60Hz refresh rate, and a 4ms response time. The backlight has a 350 cd/m2 output while the contrast ratio sits at 1000:1, unlike the larger U32P2 which uses VA and has 3000:1. This model doesn’t have special features like HDR, but it advertises extended gamut coverage and accurate colors.

27-inch 4K monitors are extra crisp due to the tighter pixel density the limited screen space provides. It’s amazing for games and movies since its sharp and detailed, but office documents can be an eyesore after extended periods. You need to use scaling for that since letters can become too small and you might find yourself squinting too often.

The AOC U27P2 renders 99% of the sRGB gamut which misses the company’s claim but is still plenty decent for daily use. its default accuracy isn’t perfect, but the deltaE average of 2.55 is already good enough for most uses. Users will not find it necessary to calibrate the monitor apart from adjusting its backlight to a more comfortable level.

Calibrating the screen reduced its deltaE average to 1.58 which is slightly better and balanced. However, most users won’t notice the improvement unless they have trained eyes or if there is a better monitor that can be used for comparison. You also need a colorimeter for an improvement like this, and those aren’t necessarily cheap.

The backlight peaked at 391 cd/m2 at 100%, but its contrast is unimpressive at 914:1 at 50% brightness. Black or dark images look grayish or washed out and only VA alternatives will be better at more or less the same price. This is a natural weakness of IPS technology so its expected, but there are some high-end monitors that have gotten around it.

Its panel uniformity was great since there were no considerable backlight leaks on the screen’s edges. There is some variance in the backlight’s spread, but it’s barely noticeable unless you scrutinize the screen with a colorimeter. Note that this aspect can vary between every unit so there are worse ones out there.

The AOC U27P2 had better pixel response times than its bigger sibling which uses VA panel. The screen only shows minor blurring in fast or contrasting transitions, but you have to remember that it’s a 60Hz panel. Setting its overdrive to its Strong level will help in this regard, although it cannot completely eliminate the persistence and streaks.

The AOC U27P2 is compatible with AMD’s FreeSync but it also works with Nvidia’s G-Sync Compatible mode if you force it via Nvidia Control Panel. This is handy for 4K monitors since powerful GPUs aren’t always available and their SRPs are wild right now. Input lag sits at 9ms at 60Hz so it’s still responsive and snappy enough for gaming.

Thoughts on the AOC U27P2

The AOC U27P2 is a great pick for an all-around display for daily use at home or in a business setting. The 4K IPS panel is crisp and decently accurate, so most users can use it right away without worrying about imbalanced colors. The monitor offers great build quality and functionality, although it could use a few extras to enhance its usability.

We only have a few complaints about the AOC U27P2 such as its OSD buttons and the lack of USB-C for future-proofing. However, that comes with a lowered price point and the desire to make a 4K monitor more competitive in its category. It’s a great buy, but it does have some limitations that you can only skip if you spend more cash.

Search
NEW
POPULAR
You are here: Home / Reviews / AOC U27P2 Review – Affordable 32-Inch 4K IPS Monitor for Home and Office
This website uses cookies to improve your experience. We'll assume you're ok with this, but you can opt-out if you wish.Accept Read More
Privacy & Cookies Policy